Answer: not a parasite; most consistent with banana material. The twist to this case is that they are NOT actually banana seeds as is commonly taught in parasitology texts. Instead, they are polymerized tannins associated with xylem strands. This information was brought to my attention by Dr. Mary Parker, a microscopist at the Institute of Food Research, Norwich, UK (thank you Mary!). I therefore decided to show this case again so that everyone could benefit from this information.

Here is the full explanation:
The Cavendish bananas that are most often sold in grocery stores do not actually develop seeds. They are naturally sterile (triploid) and can only be propagated vegetatively. However, each aborted ovum has a vascular network consisting of xylem strands and associated cells containing astringent tannins. Upon ripening, the tannins polymerize into a semi-solid mass called 'tannin bodies' which fill the cells. The tannin bodies sometimes incorporate red-brown pigments from polyphenol oxidase activity (like the browning reaction in cut apples) as the cells age, and can therefore be seen as the red-brown bodies in this case. They are associated with the xylem strand which give them a chain-like appearance.


Because I've received some degree of skepticism when I've posted banana material in the past, I decided to conduct an experiment to see if I could recreate their appearance through some laboratory digestion techniques. So here was my process:

Step 1. Sacrifice my banana from lunch for the good of science 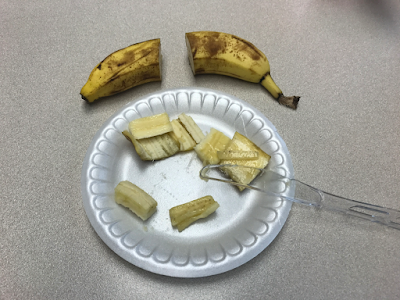 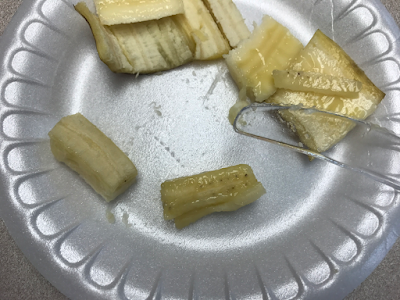 Note the darkly-staining structures that are seen in these longitudinal sections. These represent tannin bodies that have darkened over time.

Step 2. Add bananas to pre-prepared tubes of proteinase K in buffer. (Unfortunately I didn't have any amylase which would have digested the carbohydrates in the banana. However, this was the best I could do to simulate the digestive process). Vortex to mix and then incubate at 56 degrees Celsius while gently shaking (the standard tissue digestion that we use for PCR pre-processing). 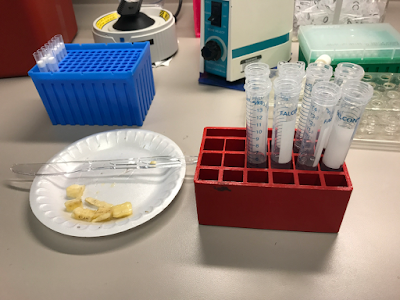 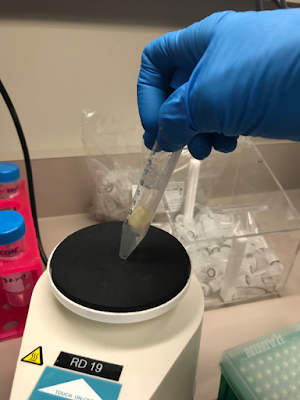 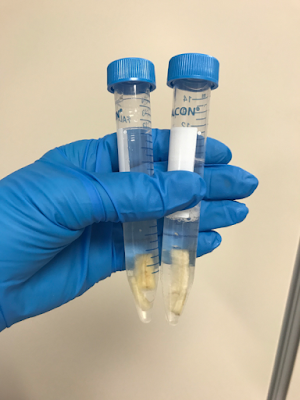 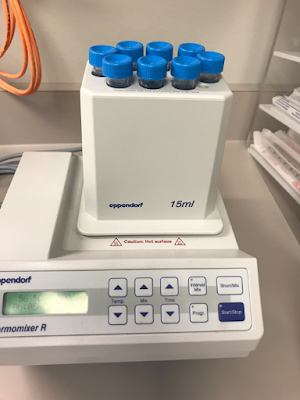 Step 3. Check regularly. I first checked every 10 minutes , but very quickly realized that this was going to be a long process. After the first 4 hours, this is how the banana sections looked: 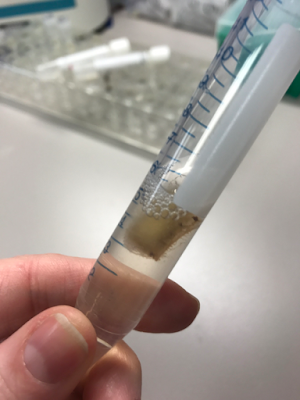 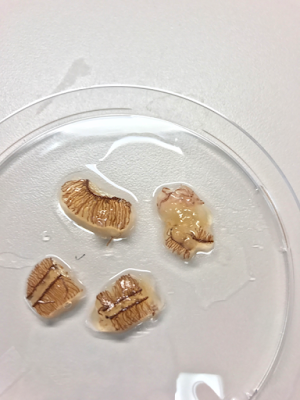 Step 5. Final check - 48 hours. Success! I think that these look nearly identical to our clinical specimen. What do you think? 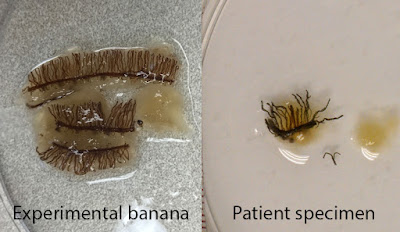 Close-up view of the tannin bodies and xylem strands (look a lot like the previous cases): 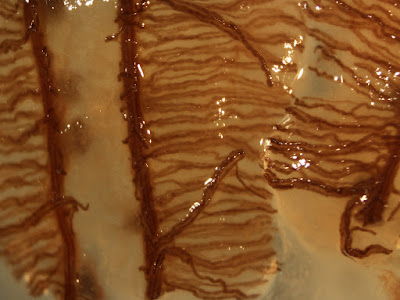 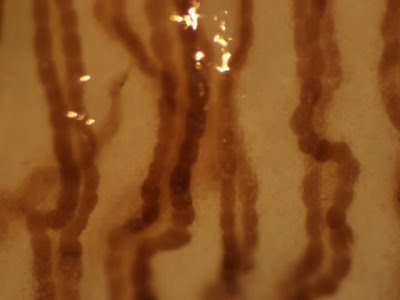 Again, it's not a perfect match since the actual patient specimen was subjected to the entire gastrointestinal digestive process. However, the strings of tannin bodies can clearly be seen. Here is how they look microscopically: 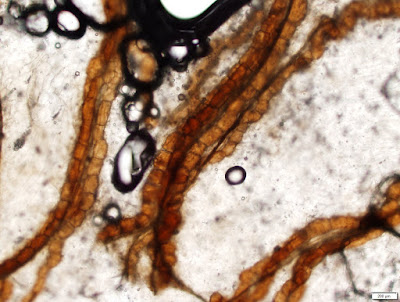 I hope you all enjoyed this experiment as much as I did!
Posted by ParasiteGal at 9:56 PM

Bobbi you are awesome! This made my day! Of course, you took your banana and replicated the mimic. Love it!!!

That is fantastic! Thank you for the scientific proof!

Just closed an email to someone with delusional parasitic infection, another set of 8 pictures.

Thanks for showing this fantastic example!

This is amazing Bobbi! A true parasitologist! Thank you so much for sharing!

So much fun and you do have amylase in your lab -- it's called spit. Old time histotechs have known for years and used as diastase instead of commercial reagents.

Too funny! And you're right of course - I could have used some good old fashioned salivary amylase. However, it probably would have taken me a while to generate enough, and I'm guessing that I would have gotten a fair amount of bacterial overgrowth if I conducted the experiment over ta 48-hour period.

The alternative that I was going to try if my first experiment didn't work was to get some amylase from our histology lab. They routinely use us in the periodic acid Schiff stain.

A nicely done disguise!
It's unfortunate for my fellow "parasitology professionals" group colleagues that you forgot to post this wonderful case on the group page as agreed before.

Pretty interesting for an experiment, we owe you for the work put into the case. Now we got the true answer from a dedicated professional.
Thank you for the shared knowledge.

Thank you for this wonderful post! It was truly my favorite by far. I have been following your blog as school assignment for the past semester and have learned so much from you!

Do you think that I would be able to replicate this experiment in my own home with common bananas from the grocery store - using saliva for amylase, as others have suggested above?

Many things could resemble the above... Uterine branching of taenia could easily look the same as could a mushroom...
Still no reason to discount the patient and call him delusional. Rude!