This week's case is a stool specimen from a 52-year-old Bolivian farmer.  He complains of intermittent right upper quadrant pain, and an abdominal CT showed edema and dilation of the bile ducts. 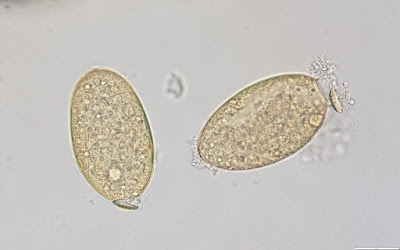 Answer to the Parasite Case of the Week 662: Fasciola/Fasciolopsis/Echinostoma species eggs. The clinical history is most consistent with infection with the liver fluke, F. hepatica, rather than infection with an intestinal fluke. As mentioned by Bernardino, Florida Fan and SB, Fasciola gigantica is also in the differential diagnosis, based on the morphology of the eggs. However, it is not found in the Americas and can therefore be excluded.

Fasciola spp., Fasciolopsis buski, and Echinostoma eggs have a similar appearance, measuring up to 130-150 in greatest dimension, and having a small operculum. In particular, the eggs of Fasciola spp. and F. buski can be particularly challenging to differentiate, although the abopercular end of the former often has a roughened or irregular area. As noted by Sheldon, size matters in parasitology! The large size of these eggs allows similar appearing fluke and cestode eggs to be excluded from the differential. 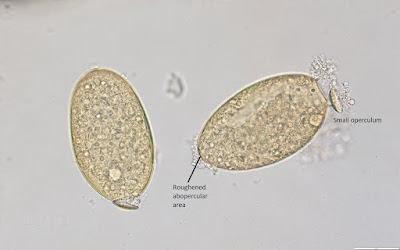 Fasciola hepatica has an interesting life cycle. I would highly recommend checking out this really cool VIDEO on F. hepatica to see all of the different stages of the F. hepatica life cycle.

The following microfilariae were seen on Giemsa-stained preparations of whole blood following the Knott's concentration procedure. They are between 180 to 200 microliters in length. No travel history was initially available. Identification? 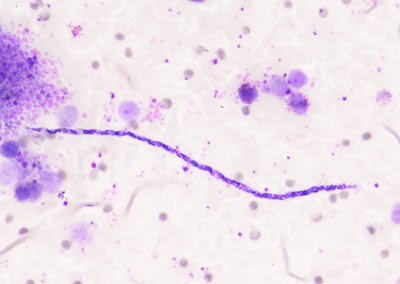 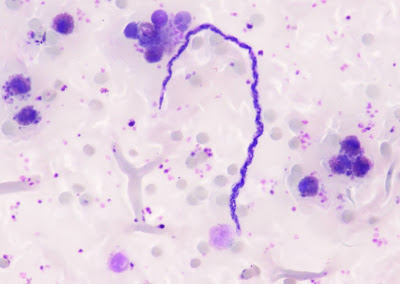 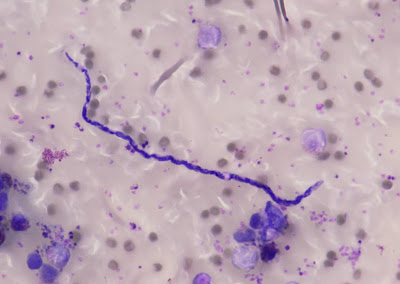 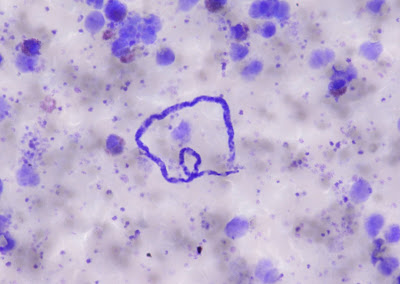 Thanks to Heather Morris for these beautiful photos.

Posted by ParasiteGal at 7:52 AM 6 comments:

Answer to the Parasite Case of the Week 661: Mansonella perstans microfilariae.

As many of you noted, this filarial worm has very small, unsheathed microfilariae. Note that the microfilariae are more slender than the eosinophils - and even the RBCs! That is one of the most helpful features. They also have a blunt tail, and the nuclei extend to the tip of the tail. 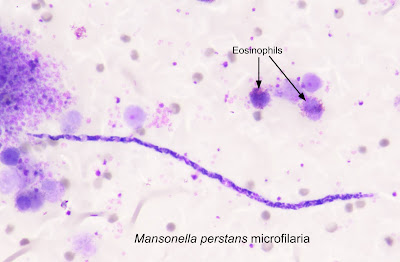 This week's case is another histopathology finding from an eye. The entire orbit was removed because of the presence of a parasitic cyst. You can see the digital slide HERE. Identification?

Here is a screen shot of the digital slide: 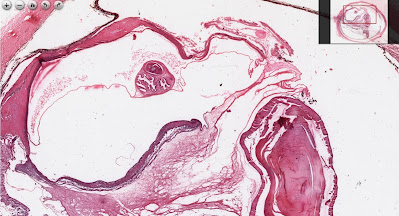 Posted by ParasiteGal at 4:18 PM 8 comments:

Answer to the Parasite Case of the Week 660: Cysticercus; larval form of Taenia solium

As noted by Blaine, this is "ocular cysticercosis caused by T. solium, as indicated by a single protoscolex. Coenurosis caused by a zoonotic Taenia is also a possibility, but coenuri have multiple protoscoleces, as do hydatid cysts of Echinococcus. Sparganosis is another cestode infection that can manifest in the eyes, but they do not produce protoscoleces at all."  Lots of great eye puns in the comments!

Here are some of the key diagnostic features: 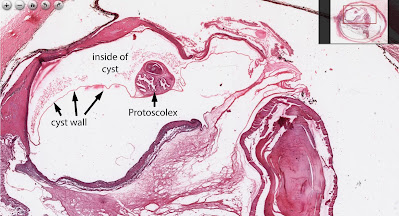 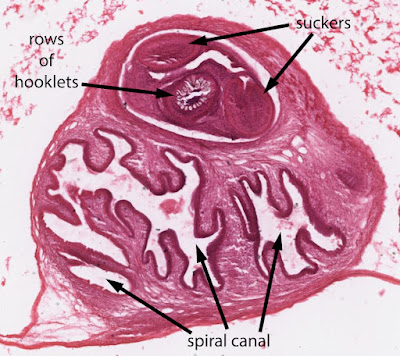 Posted by ParasiteGal at 12:41 PM No comments:

This week's case features a digitally-scanned section of a subcutaneous nodule from the thigh of a man living in rural Senegal. The man presented with a several month history of severe itching in his lower extremities and abdomen, accompanied with a papular skin rash and focal loss of skin pigmentation.

Here is a low power view of the skin and underlying nodule: 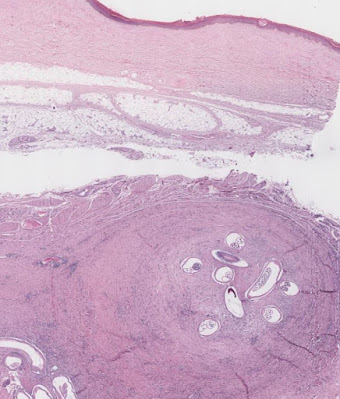 Posted by ParasiteGal at 8:16 AM 2 comments:

Answer to the Parasite Case of the Week 659: Onchocerca volvulus adult worms and microfilarie.

If you didn't already see it, check out the whole slide scanned image HERE.

In this case, you can see a large subcutaneous nodule containing the adult worms (each female with  a characteristic "double barrel" uterus) and microfilariae being released into the surrounding skin. 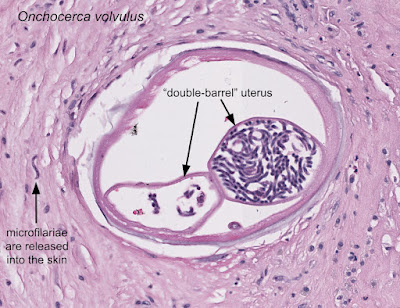 The microfilariae are the primary source of disease, as they crawl through the skin causing intense itching and inflammatory changes. They also go to the eye and cause irreversible blindness. The latter is the reason that infection is called "River Blindness". Infection is transmitted through the bite of infected black flies (Simulium sp.) which breed in fast flowing waters.

Posted by ParasiteGal at 7:12 AM 4 comments:

This week's case is a thick blood film from a patient with fever and recent travel to East Africa. Diagnosis? Would you like any additional studies? 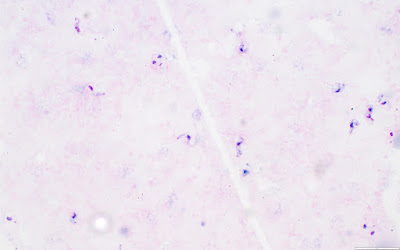 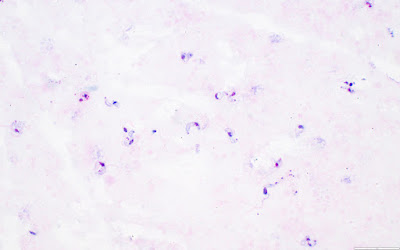 Posted by ParasiteGal at 2:58 PM 7 comments:

Answer to the Parasite Case of the Week 658: Trypanosoma brucei

Given the travel history and rapid onset of symptoms, T. b. rhodesiense is the most likely parasite present. This case shows very high parasitemia with numerous trypomastigotes seen on the patient's thick blood film. Here is the corresponding thin blood film, highlighting some of the key diagnostic features: 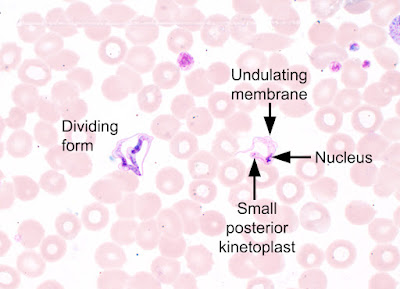 Note that the motile flagellate form (i.e., the trypomastigote) of T. brucei divides by binary fission in the peripheral blood. This is in contrast to Trypanosoma cruzi, the cause of American trypanosomiasis (a.k.a. Chagas disease), in which it is the non-motile tissue amastigote form that divides. Amastigotes are not seen with T. brucei infection.
When seen in the peripheral blood, the trypomastigotes of T. brucei need to be differentiated from those of T. cruzi - particularly when the travel history is not known. Humans can also have transient asymptomatic parasitemia with some of the zoonotic trypanosomes.
So what are the next steps?
If there was a concern for mixed trypanosomiasis/malaria, then examination of a thin film (and/or PCR) would be indicated, as suggested by Murtadha Maradun Mohammad.
If we are uncertain of the infecting Trypanosoma subspecies (e.g., if the patient was in Uganda where both T. b. rhodesiense and T. b. gambiense are present), then we could also perform serology or PCR as noted by John Markantonis and Harsha Sheorey.
Importantly, LS noted that examination of the CSF would be the next step once we have confirmed the diagnosis, since detection of parasites in the CSF would change the treatment regimen.
You can read about the treatment regime for early and late (CNS) stage Rhodesian trypanosomiasis HERE. The only approved therapy for late stage Rhodesian is melarsoprol, an arsenic-containing compound that causes encephalopathic reactions in 5–10% of patients. When this occurs, there is a ~50% case-fatality rate (!)

Posted by ParasiteGal at 6:50 PM No comments: