This weeks case may look familiar (hint: we've seen a similar case on Creepy Dreadful Wonderful Parasites before) but I thought that these pictures were so striking that I wanted to share them with you.

The following were submitted to the laboratory on a glass microscope slide. No history. Identification? (CLICK ON IMAGES TO ENLARGE) 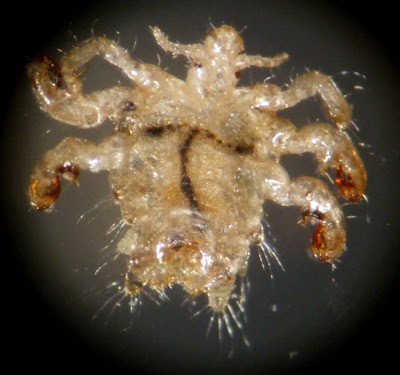 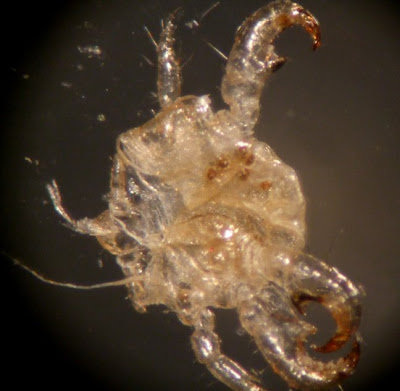 Posted by ParasiteGal at 9:50 AM 2 comments:

Little known facts about the crab louse:
1. It's an obligate parasite, living and feeding only on humans.
2. It takes 4 to 5 blood meals a day.
3. The closely related body louse feeds even more frequently and can cause anemia in heavily infected individuals. Historically, children with louse-induced anemia looked pale and unwell - this is where the term "lousy" came from.
4. The crab louse most commonly inhabits the genital area but can also inhabit the hair under the arm pits, eye brows, and eye lashes. The latter may be seen in children and does not necessarily indicate sexual abuse; infection can be passed from one child to another through casual contact.
Posted by ParasiteGal at 9:20 AM No comments: 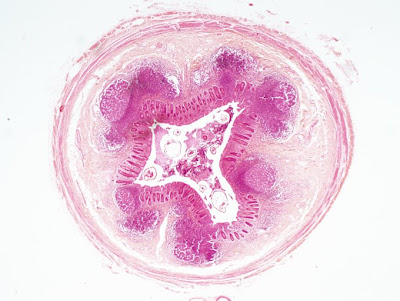 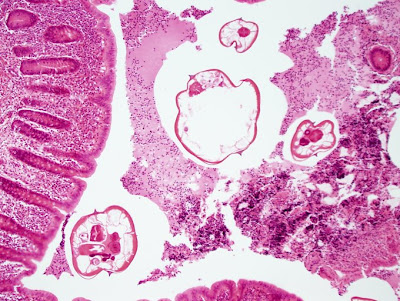 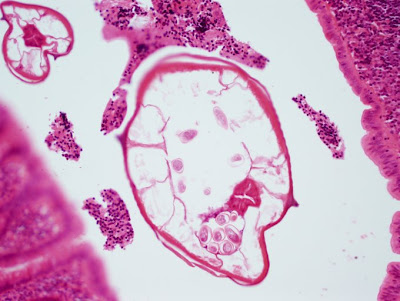 Answer: Enterobius vermicularis (pinworm)
Shown are cross-sections of the adult worms within the lumen of the appendix. In some cross-sections you can see the characteristic eggs within the females (below is the egg in a stool iodine prep from a different patient). 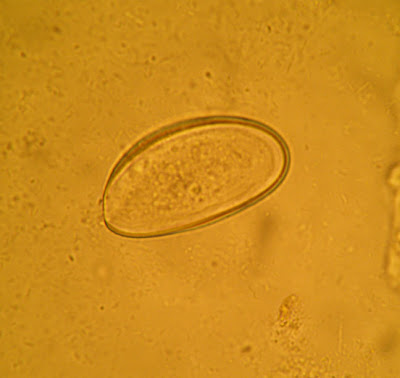 What is also classic about this case is the location (appendix and cecum are traditional locations for the adult female pinworm) and the lateral alae on the worms. Alae, (plural of ala, Latin for 'wing') are longitudinal ridges seen in the larval forms of nematodes, (e.g. Ascaris lumbricoides), and the adult worm Enterobius vermicularis. In fact, Enterobius is the only ADULT worm with these ridges that parasitizes humans. Below is the cross-section from this case showing the lateral alae (arrows) as well as a longitudinal view of the adult worm in an iodine stool prep (arrow marks the ridge on one side of the worm). The ridges extend the length of the worm. 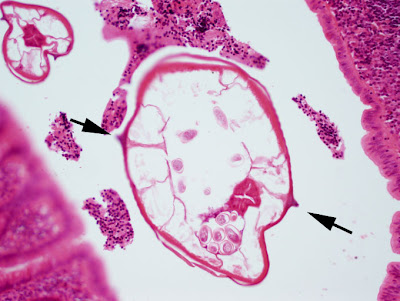 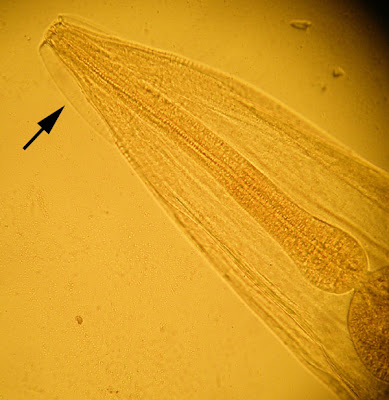 Tom was correct in mentioning Toxocara spp. since the larval form causes visceral larva migrans in humans. However, the larva are much smaller than the adult E. vermicularis and would be seen within the parenchyma of tissues (e.g. liver) in association with a marked inflammatory response.
Posted by ParasiteGal at 8:37 AM No comments:

The following were seen in a papanicolaou-stained urine preparation. These objects range in size from 20 to 50 microns.
Identity? 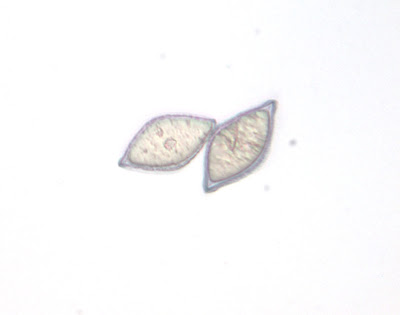 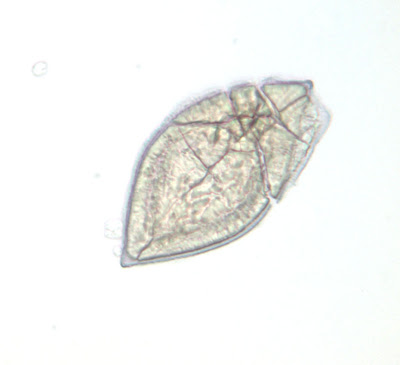 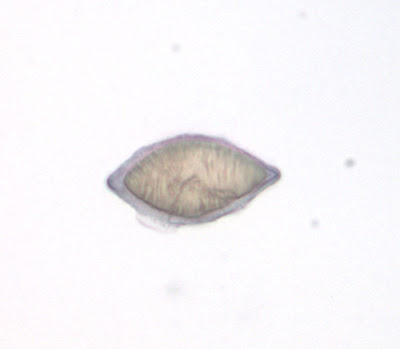 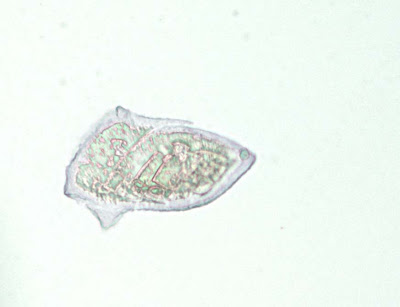 Posted by ParasiteGal at 1:50 PM 2 comments:

Answer: crystals (urate)
Great job to everyone who got this one. Crystals in urine are a common mimic of parasite eggs. The ways to distinguish them from the real thing are as follows:
1. Parasite eggs will have internal staining structures on Pap, Giemsa, and H&E stains, whereas crystals will be colorless or only slightly pigmented.
2. Parasite eggs are uniform in size, whereas crystals will show greater size variation. In this case, the crystals were also much smaller than the Schistosoma eggs that they mimicked.
3. Crystals will often show cracking artifacts and appear refractile.
4. Crystals will not reliably show the defining features of parasite eggs. In this case, they mimicked both Schistosoma mansoni and S. hematobium eggs. However, the spines were never completely characteristic. For example, S. hematobium eggs have a spine at only 1 terminus (instead of both ends like the urate crystals shown).

Below is a true S. hematobium egg (left) to compare to the urate crystal (right). They are shown at approximately the same magnification to highlight the difference in sizes. 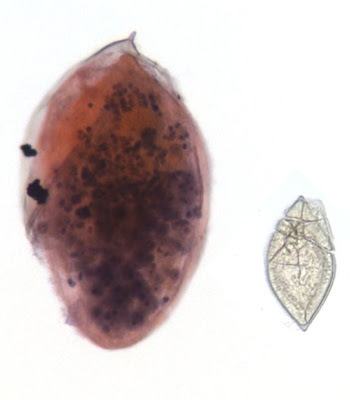 Posted by ParasiteGal at 8:28 AM No comments: 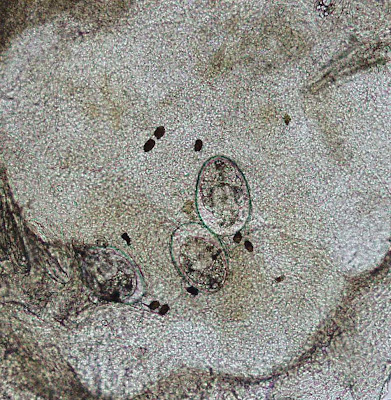 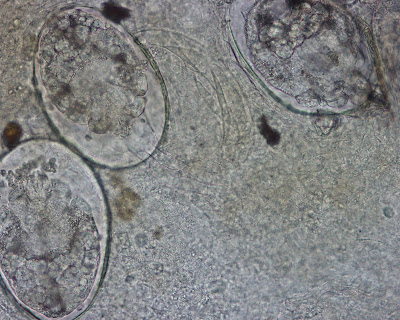 Answer: Scabies eggs and fecal pellets.
Posted by ParasiteGal at 1:49 PM No comments: