The following was passed in the stool of a toddler and sent to the lab for identification.  It measures approximately 20 cm in length. (CLICK ON IMAGES TO ENLARGE) 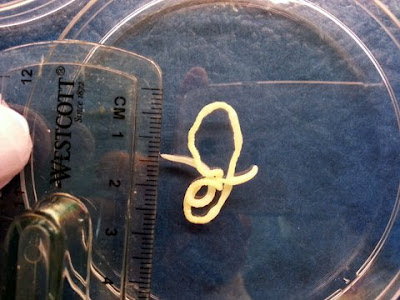 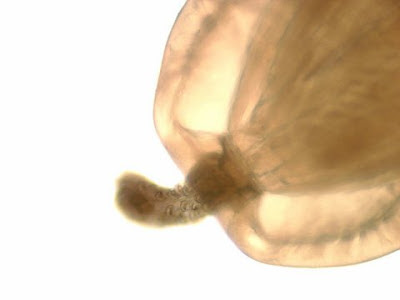 The following egg was also identified in the child's stool: 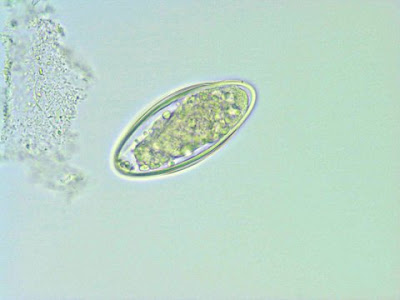 This case was generously donated by P.D.
Posted by ParasiteGal at 8:33 PM 10 comments:

This was a challenging case, and I was very pleased to see how many people submitted the correct answer.

The diagnosis of acanthocephaliasis can be made from recognizing the armed proboscis with recurved hooks protruding from the worm.

Of note, M. moniliformis is transmitted by ingestion of arthropods such as beetles and cockroaches.  This explains why this infection is seen in young children, as well as in populations that eat arthropods for medicinal or dietary purposes.


Posted by ParasiteGal at 1:13 PM No comments:

The following was seen in resected periumbilical skin nodule from a 60 year old male.
(CLICK ON IMAGES TO ENLARGE) 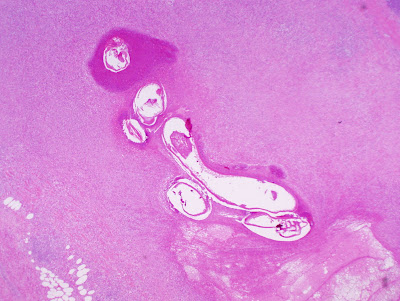 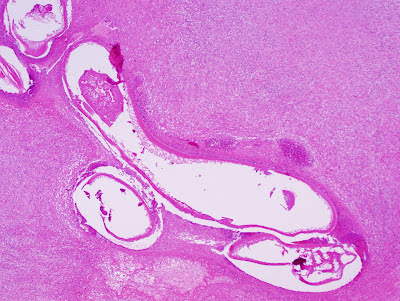 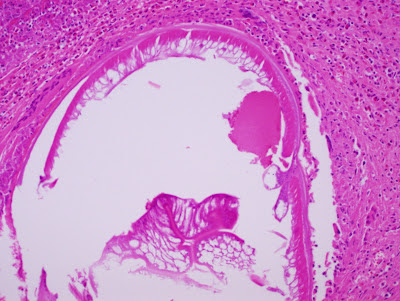 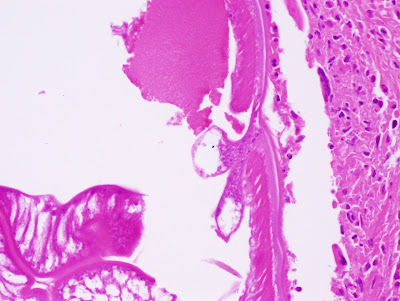 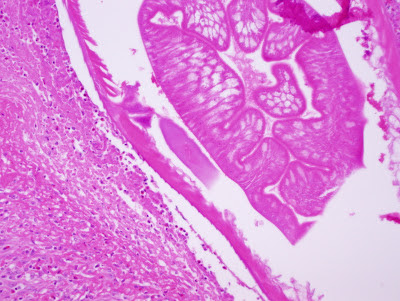 Answer:  anisakiasis due to Pseudoterranova decipiens

The viewers had a lot of good suggestions for this case, given the unusual location of a round worm in the periumbilical skin.  Some suggested that this could be Dirofilaria, Onchocerca volvulus, or a worm causing cutaneous larva migrans - all possible causes of a subcutaneous nodule.

However, the key to making this diagnosis is not the history (although it can fit with this worm), but instead, the classic histologic features, including relatively large size and prominent lateral cords (the latter which are characteristics of the anisakids). 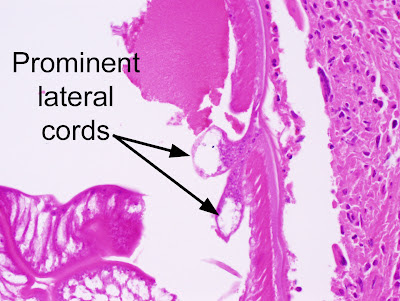 As most of you know, the anisakids, including Pseudoterranova decipiens and Anisakis spp., are acquired by eating undercooked or raw fish.  Once ingested﻿, the worms may pass through the gastrointestinal tract, get coughed up, or in the worse-case scenario, attempt to burrow into the intestinal tract.  Burrowing worms cause severe acute pain, typically necessitating their endoscopic removal.  Rarely, the worms can perforate the intestinal tract and enter the peritoneal cavity.

My guess in this case is that the worm penetrated the small or large intestine and ended up lodged in the peritoneal wall resulting in a palpable periumbilical nodule.

Posted by ParasiteGal at 8:17 PM No comments:

The following were submitted for parasitic identification.  The patient is a 30 year old woman with no travel history outside of the United States. The objects measure 7 cm in maximum length. 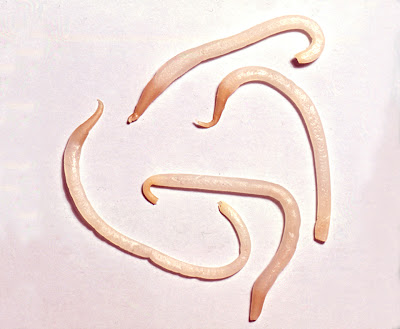 Answer:  Not a human parasite; most closely resembles bean sprouts.

Although many of you suggested that these might be Ascaris adult worms, the blunt ends and irregular indentations are not consistent with this identification.  Real Ascaris would have a smooth cuticle and a tapered head and tail.

Because there are many parasite mimics that are routinely submitted to the laboratory, we always carefully examine submitted material using a dissecting microscope.  If we get something that might be a worm, we confirm our identification by trying to manipulate the object and express eggs from them.  Mucus strands may resemble worms, but easily fall apart with manipulation.  Bean sprouts, on the other hand, would retain their firmness, but would easily be broken apart using gentle pressure with forceps.  Also, no eggs would be seen in fluid expressed from them.
Posted by ParasiteGal at 1:50 PM No comments:

The following were seen in peripheral blood films.  The patient has recently immigrated to the U.S. from Southeast Asia. (CLICK ON IMAGES TO ENLARGE) 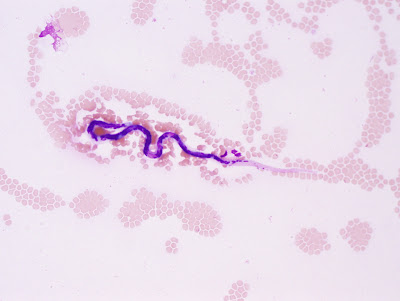 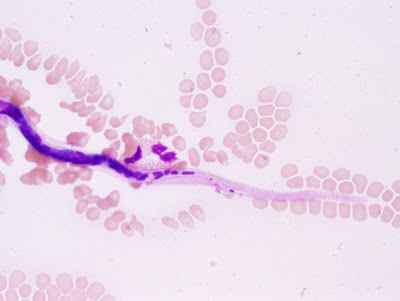 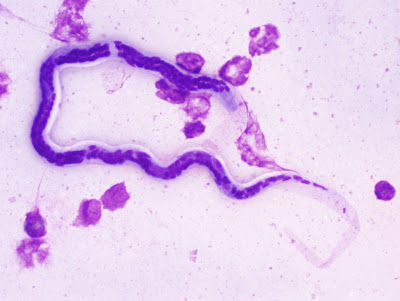 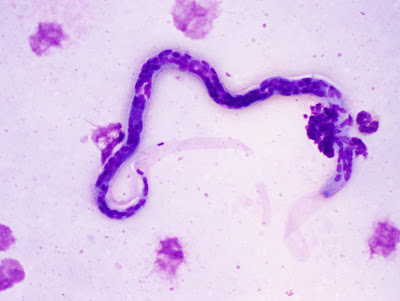 This is actually a case of B. malayi.  However, the sheath is not stained as deep pink as would be expected with a routine Giemsa stain, so B. timori is also in the differential diagnosis.  The size (which I didn't provide) would give you some help in differentiating these 2 species, since B. malayi is 177-230 microns in length, while B. timori is 265-323 microns in length in blood smears.

The important differential diagnosis is Wuchereria bancrofti, which can be excluded by the presence of the long head space and tail nuclei (terminal and subterminal nuclei). 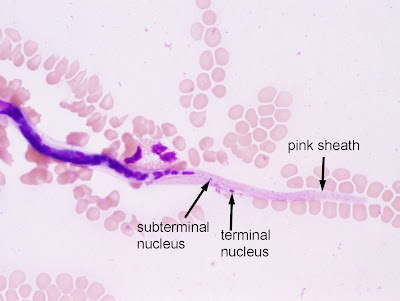 Posted by ParasiteGal at 4:51 PM No comments: