The following objects were identified in a concentrated fecal preparation from a 5 year old Kenyan adoptee. They range in size from 30 to 60 microns in length. Identification? (CLICK ON IMAGES TO ENLARGE) 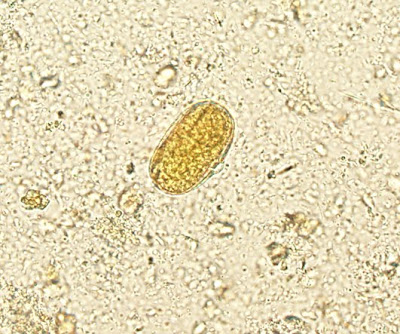 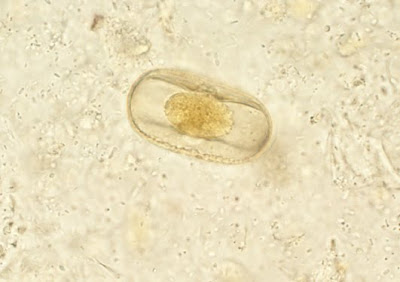 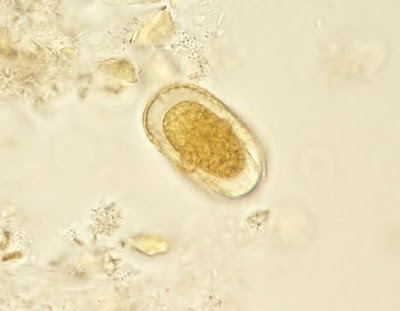 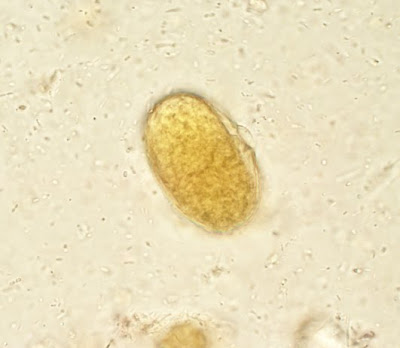 Answer: Pollen, not a human parasite
Thank you to everyone who wrote in with your answer! Most recognized these objects a non-parasitic structures, based on their irregular size and shape, as well as lack of homology with known parasite eggs. Note the irregular contours in the images below which helped me determine that these weren't real eggs. 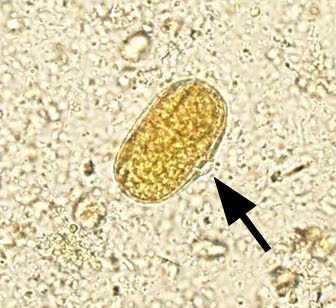 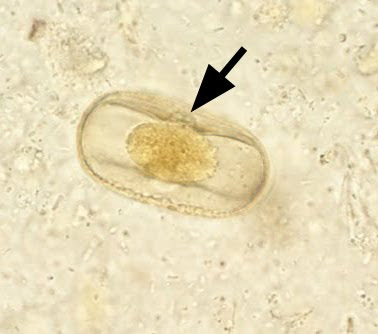 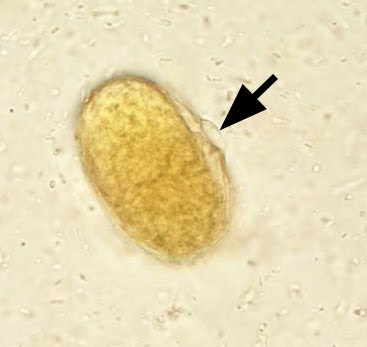 I have a real challenge for you this week! A 16 year old immigrant from Ethiopia presented with acute severe right upper quadrant pain, accompanied with fever and nausea. CT findings suggested a liver abscess and obstruction of the main hepatic duct. The patient's serum tested negative for Entamoeba histolytica antibodies. Stool parasite exam revealed eggs of several round worms and Giardia intestinalis cysts. Liver biopsy showed the following objects, measuring 60 to 80 microns in greatest dimension: (CLICK ON IMAGES TO ENLARGE) 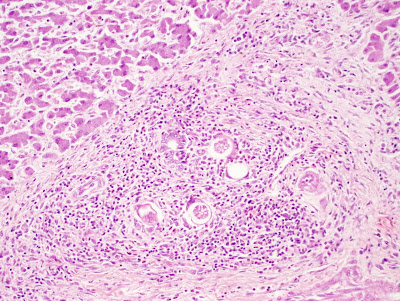 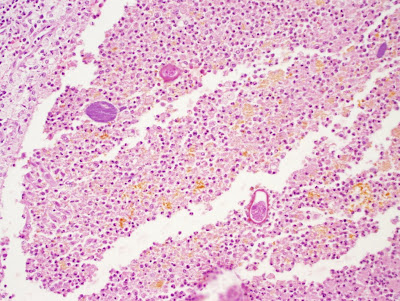 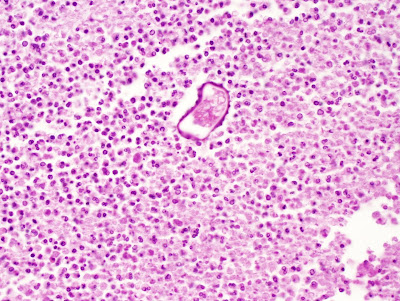 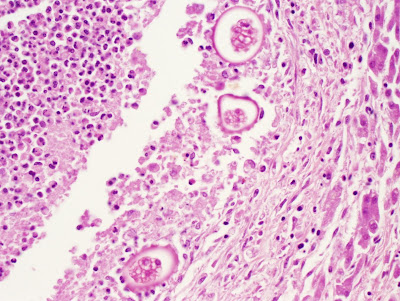 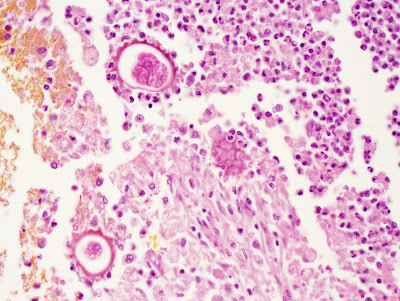 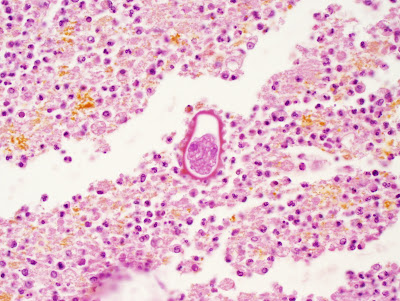 Posted by ParasiteGal at 4:01 PM 3 comments:

This was definitely a challenging case, but the clues for diagnosis were as follows:
1. Size of eggs
2. Presence of external mammilations on the eggs, characteristic of Ascaris eggs
3. Presence of Ascaris eggs in the patient's stool, confirming the presence of intestinal ascariasis.
4. CT findings suggestive of bile duct obstruction (consistent with the presence of the adult Ascaris female worm in the bile duct - a rare but potentially serious complication.

Thanks to all of you that decided to take the plunge and submit an answer!
Posted by ParasiteGal at 11:45 AM No comments:

The following were seen in a Papanicoloau stained urine preparation. They vary in size from 40 to 60 microns in length. Identification? 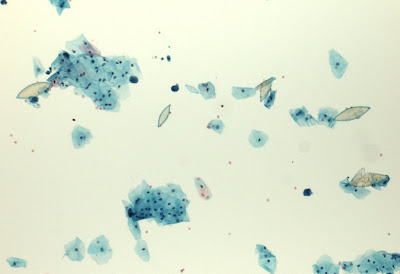 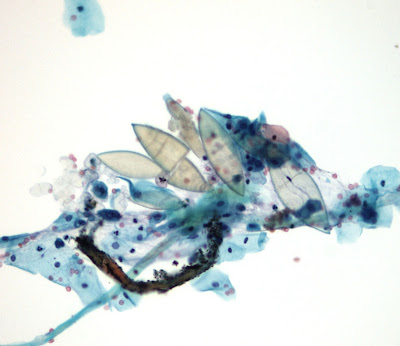 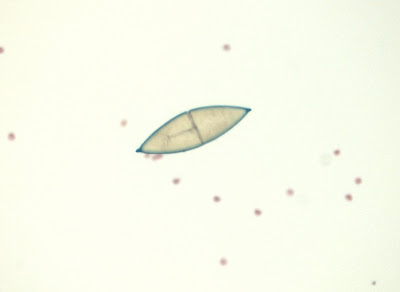 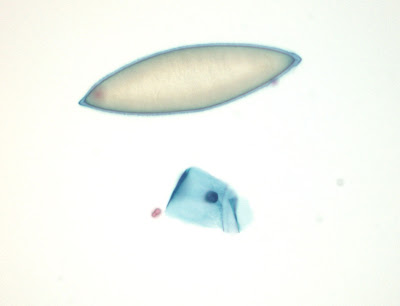 Identification: Not a parasite; most likely uric acid crystals.
Congratulations to Dana who got this one right!

These crystals can cause quite a problem for the untrained cytopathologist, since they resemble parasite eggs and fungal conidia. However, as Luke points out, these are not parasite eggs because they have spines at BOTH ends, and not just one (as you would expect for Schistosoma hematobium eggs).

Other clues to tell us these are not parasite eggs are:
1. the cracked appearance of some of the crystals (parasite eggs may break open, but don't usually crack neatly in half)
2. Lack of internally staining structures (remember this is a pap stain, and true parasite eggs will typically stain)
3. Size variability and small size (smaller than what would be expected for S. hematobium eggs.

I've actually shown a picture a picture of these crystals before:
Click HERE to see the previous case.
Posted by ParasiteGal at 8:02 AM No comments:

A renal allograft recipient presents with increased serum creatinine and shortness of breath. The following objects measuring 2-3 microns in length were seen in the urine on Ryan's Trichrome Blue stain: (CLICK ON IMAGES TO ENLARGE) 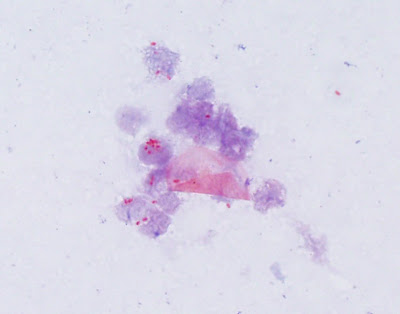 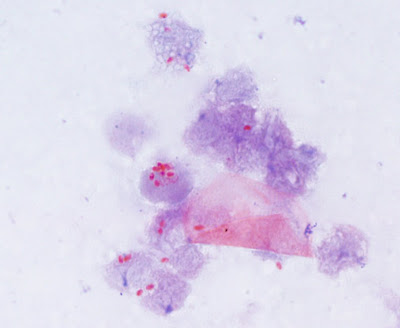 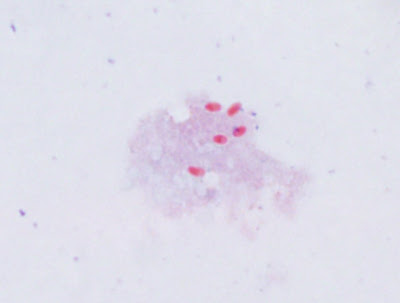 Identification? Could this finding be related to her respiratory symptoms?
Posted by ParasiteGal at 10:14 AM 5 comments:

Answer: Microsporidia
Great comments for this case!
From Anonymous:
"The structures remind me of microsporidia. And because (a) trichrome staining of urine isn't typical, and (b) it's posted by a parisitologist, I'm guessing protist . . ."

Yes, good guess - although, as another anonymous commenter states: "this is another good 'parasite' that the mycologists stole." It's true - genomic evidence suggests that microsporidia are actually highly specialized fungi and NOT parasites. Alas.

Finally, Luke mentions "The use of the Ryan's blue modified Trichrome stain is usually specifically for detection of microsporidia spores. I think this is what this is. Given the increased serum creatinine levels, the patient evidently has renal dysfunction - the respiratory symptoms could be caused by the fungal microsporidia infecting mulitple organs - respiratory system has been involved in other cases but less frequently compared to small intestine, urinary tract and biliary tree, and most commonly seen in AIDS patients. The first documented case of an extra intestinal case of microsporidiosis in a renal transmplant patient was reported by Latib et al (2001) and can be found here".

So more on this case:
The modified or Ryan's trichrome blue stain is useful for staining the spores a bright red; while it's not specific (yeast can stain a fainter pink and other organisms may also be positive), it's helpful for identifying the spores of this small (2-5 micron) organism. The presence of a central bar (running perpendicular to the long axis of the spore) is a helpful feature for distinguishing microsporidia from various yeasts: 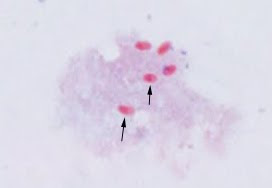 This patient ended up having renal involvement (diagnosed by renal biopsy) as well as lung involvement (diagnosed by BAL). By a lab-developed PCR assay, the BAL and urine were positive for Encephalitozoon cuniculi. This was also confirmed by electron microscopy of the the renal biopsy. This is consistent with infection with this species that commonly causes urinary and respiratory disease. So in the end, both this patients rising creatinine and respiratory symptoms could be attributed to a single infectious cause.

Thank you all for the great comments!
Posted by ParasiteGal at 7:00 PM 9 comments: