This week's case is generously donated by Dr. Kamran Kadkhoda. This little arthropod was discovered in Manitoba, Canada. Identification? 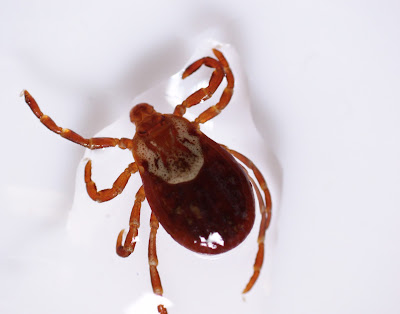 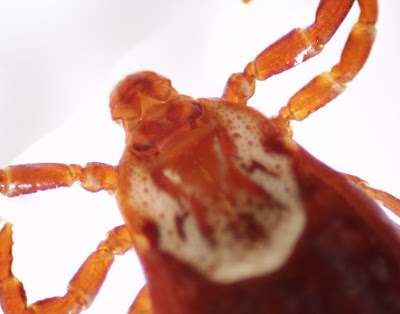 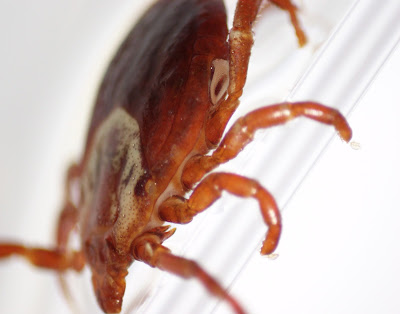 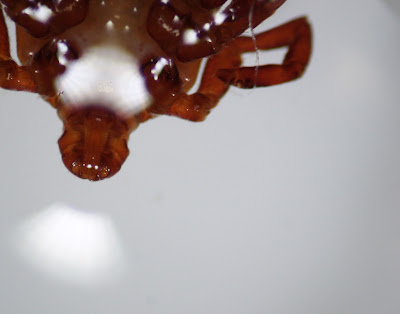 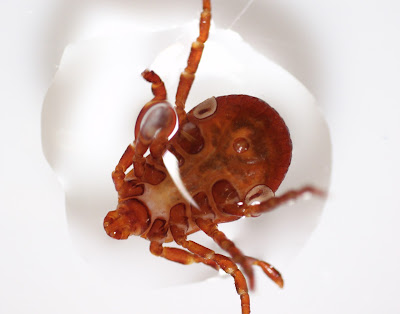 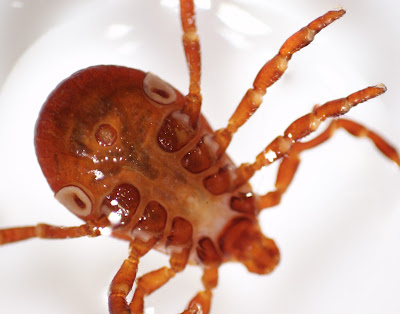 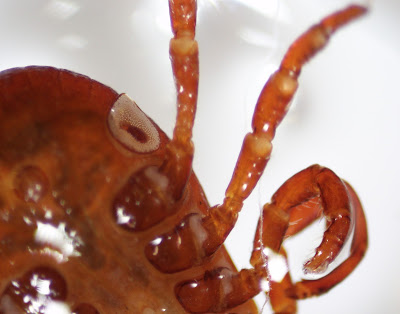 The CDC has a nice basic pictorial identification key that you can access HERE. This key will walk you through the identifying features of hard ticks, and Dermacentor species specifically. Differentiating D. variabilis from D. andersoni (and other Dermacentor spp.) is a bit trickier and is based on the size and number of goblets on the spiracular plates; while Dermacentor variabilis has more than 300 small goblets, D. andersoni has 100-200 moderately sized goblets. 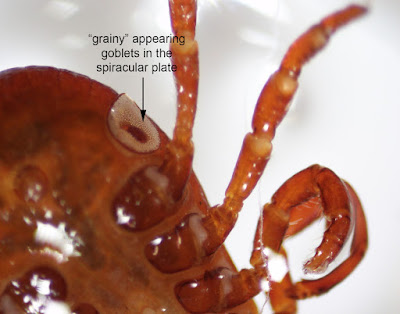 I particularly like Ellen's analogy, in which she described the goblets of D. variabilis as 'grainy' while those of D. andersoni resemble Cheerios.

The location where this tick was found (Manitoba, Canada) also helps differentiate the two. Dermacentor variabilis has undergone a range expansion in the Canadian Prairies since the 1960s (see Dergousoff et al. J Med Entomol 2013) so that D. variabilis is the species we would expect to see in Manitoba.
Posted by ParasiteGal at 8:17 AM No comments:

The following object was found in a toilet and submitted to the parasitology lab. Identification? What is the significance of this finding? Images taken by my fabulous education specialist, Emily Fernholz. 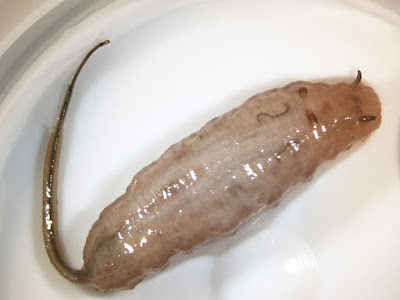 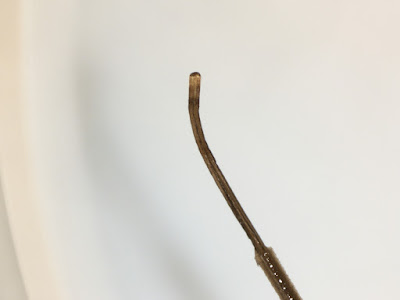 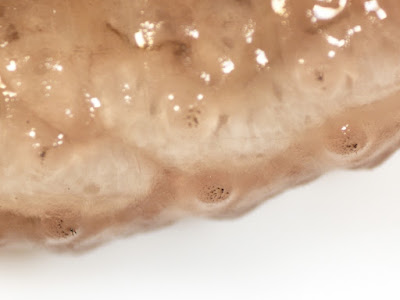 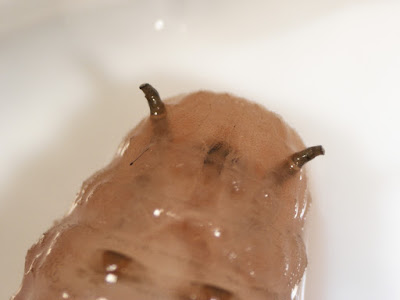 As nicely described by one of my readers, David Bruce Conn, "This is a rat-tailed maggot, larva of a hover fly belonging to the family Syrphidae. This one may be of the common genus Eristalis. They are not parasitic, but typically live in stagnant water and feed on organic material before pupating. They may incidentally live in toilets and latrines."

The larvae are very recognizable, a long "tail" that contains a breathing tube (respiratory siphon) that connects to the tracheal system and allows the larva to breath oxygen from the water surface. You can also make out antennae and prolegs. 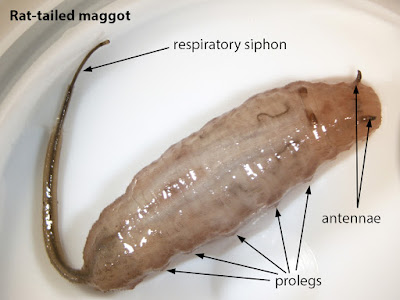 I should note that there have been a few reports of facultative myiasis by this group, but in further investigating these references, I couldn't find any definitive evidence that this occurs (the specimens were all brought in by the patient after being found in the toilet.) Therefore, I think that unless definitely proven, all cases of rat-tailed maggots should be considered incidental findings due to environmental contamination.


Posted by ParasiteGal at 9:19 PM No comments:

This week's beautiful case was donated by Florida Fan. These objects were identified during colonoscopy from a middle-aged man. No further history is available. Identification? 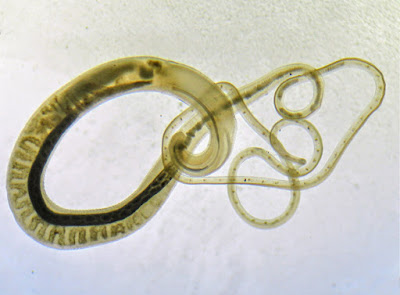 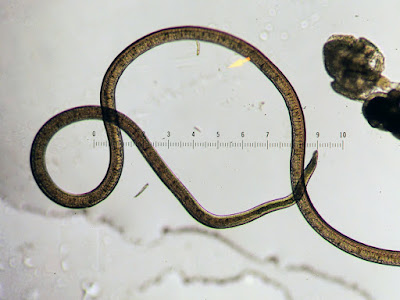 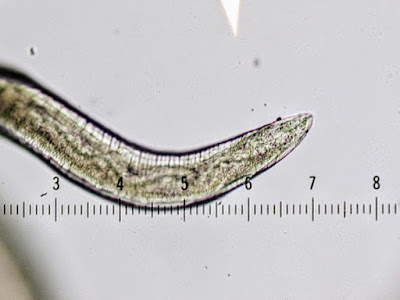 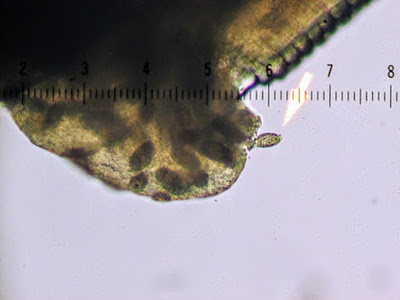 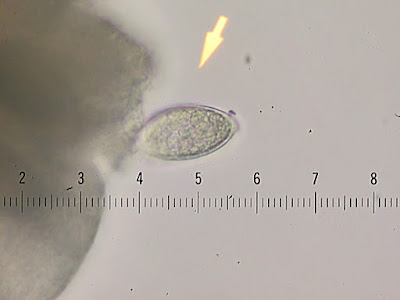 Answer to Case of the Week 448

The photos in this case show most of the characteristic identifying features of adult T. trichiura (a.k.a. whipworms) including the classic "whip" shape and eggs with bipolar plugs. The full adult shown is a male as evidenced by his reproductive structures and curled tail. Note that the skinny end is the anterior aspect and not the tail like many students of parasitology would initially assume. The full body of the female is not shown, but you can see characteristic eggs coming out of the uterus. 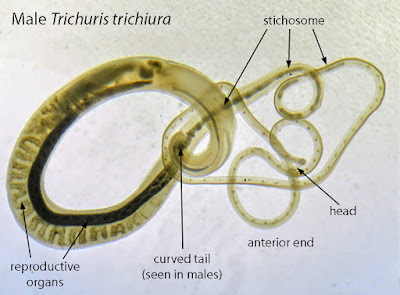 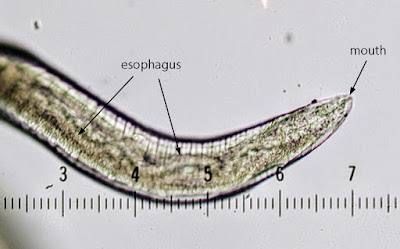 The stichosome is clearly visible in some of the photos; this prominent glandular organ is seen in trichurids such as Trichuria and Trichinella (as well as some other nematodes) and consists of a row of multiple unicellular cells called stichocytes. The stichosomeruns along the posterior aspect of the esophagus and is a key identifying feature in both intact and sectioned worms. The stichosome opens into the esophageal lumen and has both secretory and absorptive functions. 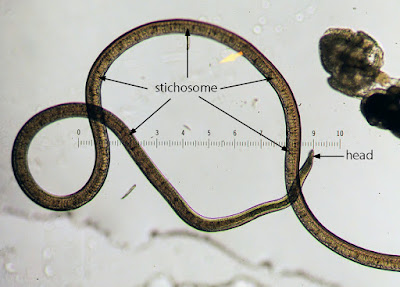 Posted by ParasiteGal at 10:59 AM No comments: