This week's case came through my lab awhile back and was beautifully captured in the following photographs by Emily Fernholz. The specimen is a Giemsa-stained thin blood film from a patient with travel to Botswana. What parasite is seen here? 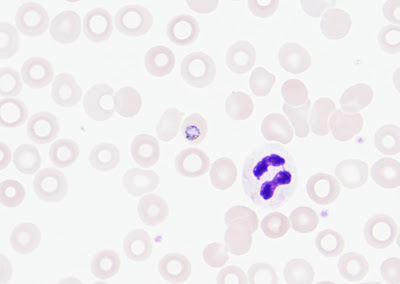 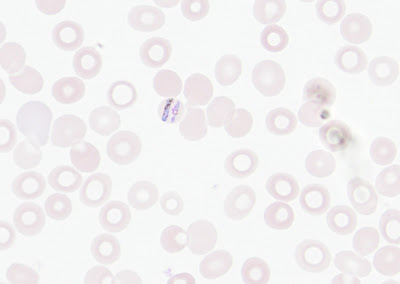 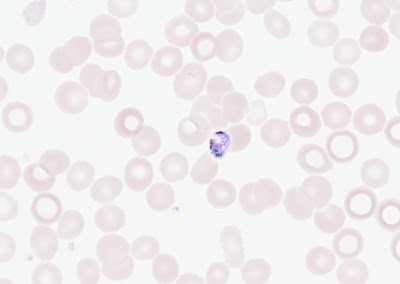 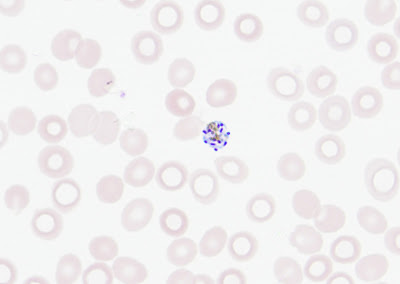 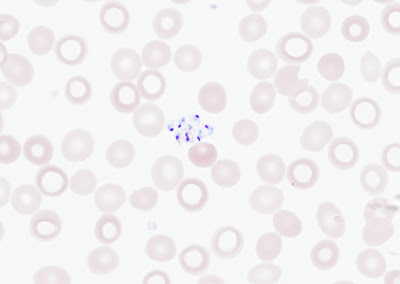 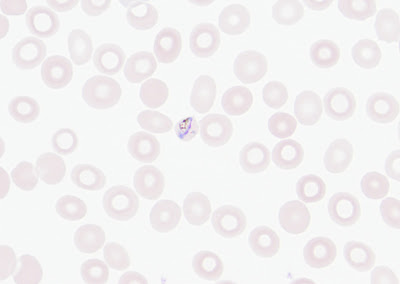 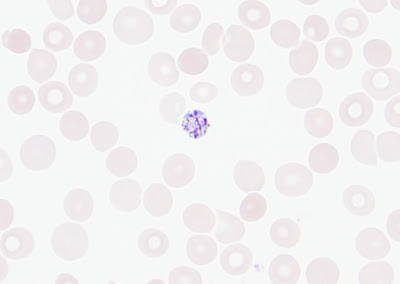 Posted by ParasiteGal at 8:21 AM 9 comments:

Answer to Parasite Case of the Week 677: Plasmodium malariae with classic band and schizont forms. There is also a hint of a basket form, and a nice collection of merozoites that recently burst out of an infected red blood cell. Note that the infected cells are smaller than the uninfected neighboring cells, which is classic for this species. Thank you for all of the great comments! 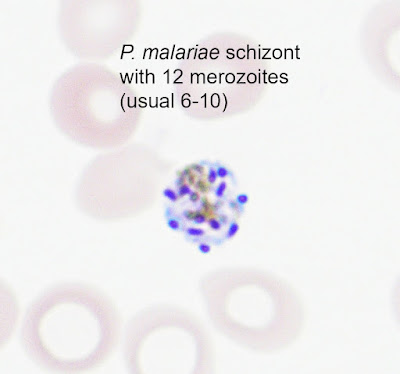 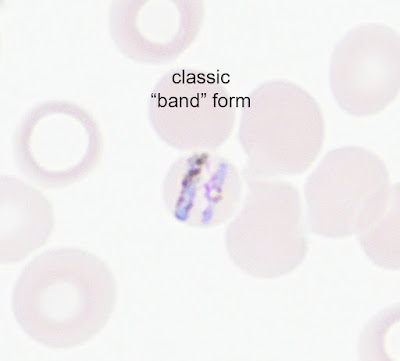 Posted by ParasiteGal at 6:12 PM No comments:

This week's case is generously donated by Dr. Adrienne Showler. The following was passed in stool by an 'adventurous eater', who regularly enjoys raw fish dishes, and also has tried raw beef and pork dishes in the United States. He reports passing similar objects on 4 separate occasions, and the length of each was between 1 and 3 feet. Unfortunately he didn't collect the samples (!), so we only have these photographs: 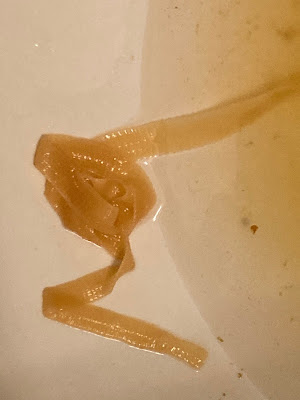 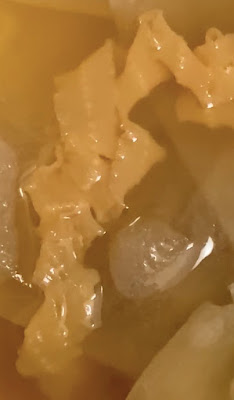 Answer to the Parasite Case of the Week 676: Cestode, most likely Diphyllobothrium/Dibothriocephalus/Adenocephalus species. The CDC DPDx webpage on diphyllobothriasis explains how some of the names have changed for this group of tapeworms.

Unfortunately the specimen was not submitted to the laboratory and we therefore can't fully examine it. However, central uterine structure seen in the photo below is consistent with an adult tapeworm of the family Diphyllobothriidae: 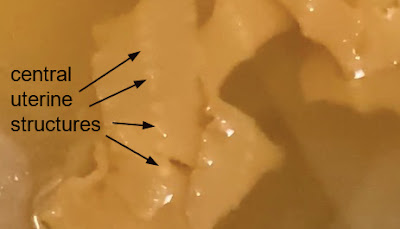 Thanks again to Dr. Showler for contributing this case!

Posted by ParasiteGal at 7:03 PM 3 comments:

This week's case was donated by Dr. Paul Valenstein, and it is a beautiful example of an uncommon finding. It is an eyelid biopsy from a 6-year-old African child. 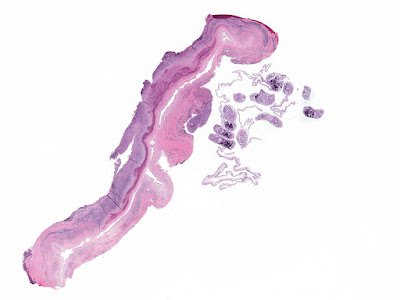 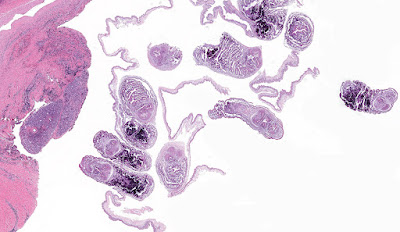 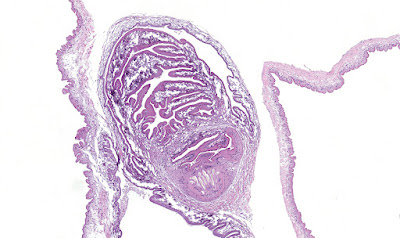 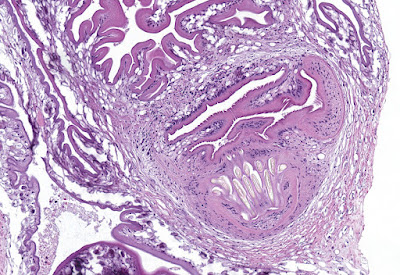 Posted by ParasiteGal at 3:53 PM 7 comments:

Answer to the Parasite Case of the Week 675: Coenurosis, a tapeworm infection with the larval form of coenurus-forming Taenia species, such as T. multiceps (the most commonly implicated species), T. serialis, T. brauni, and T. glomeratus.

Some of you noted the resemblance of this tissue infection with cysticercosis. That makes sense since human cysticercosis is due to the related cestode, Taenia solium. The primary difference is the presence of a single protoscolex in cysticercosis, vs. multiple protoscoleces in coenurosis.

Here is my approach to the diagnosis: 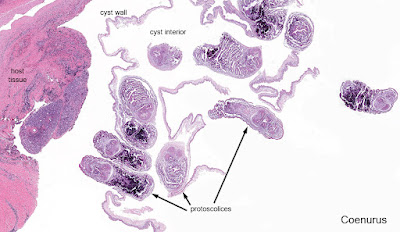 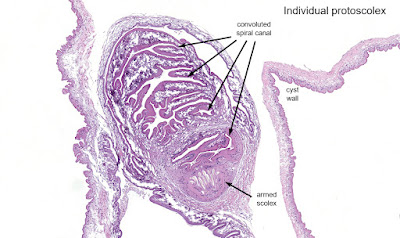 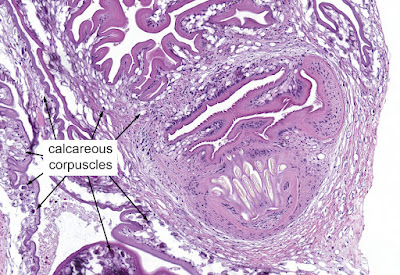 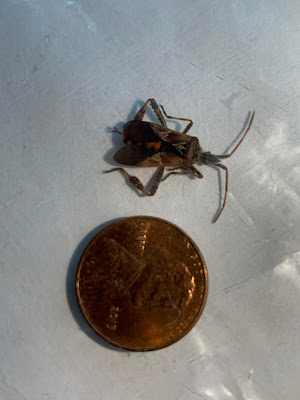 Of note, the family lives in the midwestern United States and has no history of recent travel.

What is the general identification of this bug? Is there any concern for disease transmission?

Posted by ParasiteGal at 2:52 PM 9 comments: