The following structures were seen on a bronchial brush specimen from an 83 year old male with a chronic cough.  The structures were moving when seen in a wet prep, and there was concern from the endoscopist that these were parasites.  The following photos are from the corresponding Papanicalaou stained cytology specimen. 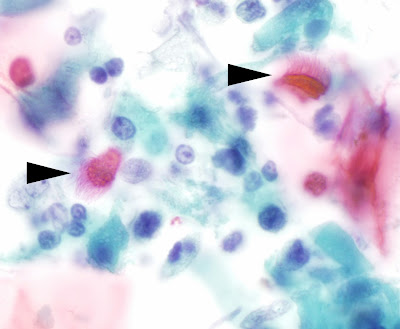 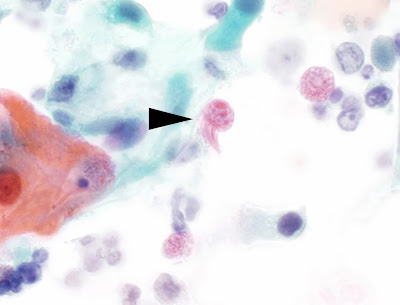 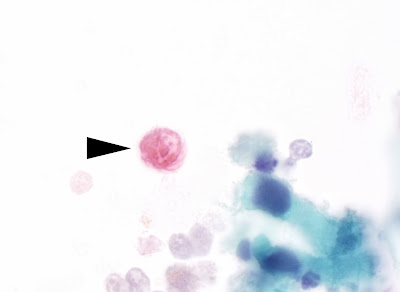 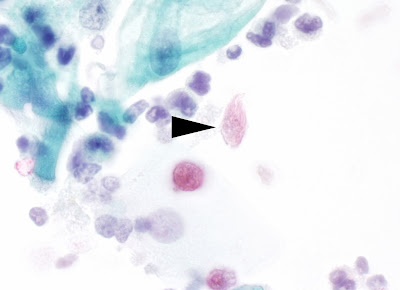 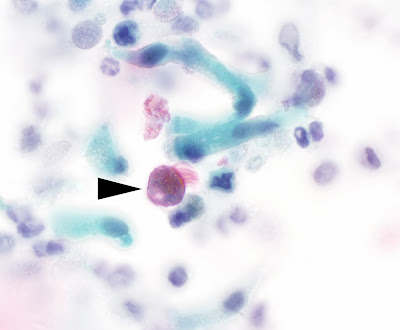 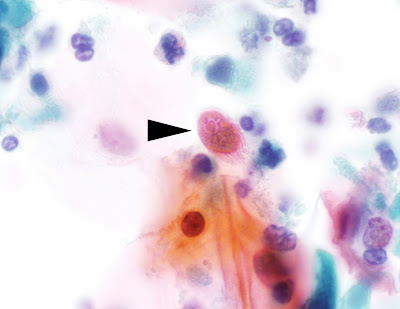 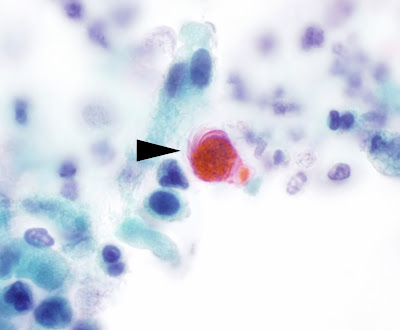 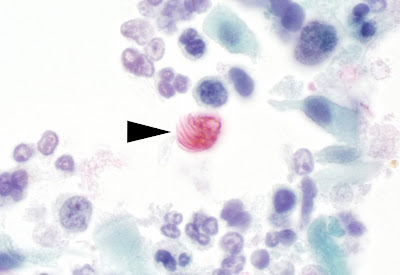 Florida Fan mentions that "Considering how many things we breath in daily, it is quite marvelous they sweep them out more efficiently than we can imagine."  Very true.  Our ciliated epithelial cells do an excellent job as part of the "mucociliary escalator" that removes inhaled debris from the respiratory tree.  Unfortunately, various inflammatory states including asthma can cause the apical ciliated tufts of the respiratory cells to detach, and more than one investigator has mistaken these for ciliated parasites.

Of note, the only ciliated parasite of humans is Balantidium coli, a large organism (40-200 micrometers) with circumferential cilia and a classic "boring" motility.  In comparison, ciliary tufts are much smaller (10-15 micrometers in diameter), have cilia arising from a flat plate-like structure, and have a beating motion in fresh preparations.

Posted by ParasiteGal at 9:55 AM No comments:

The following is a corneal biopsy from a woman with a red and painful eye. 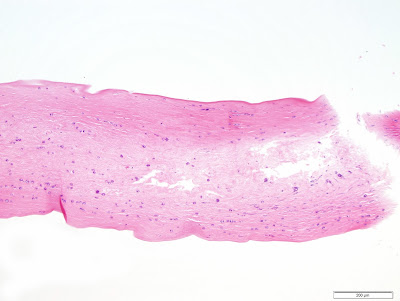 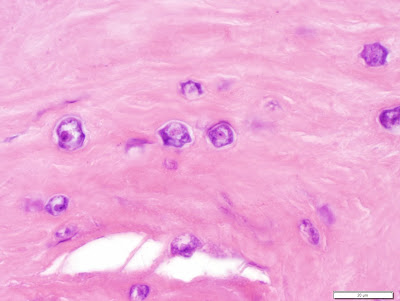 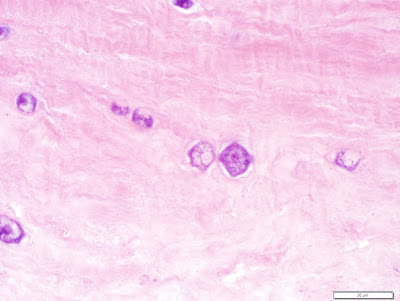 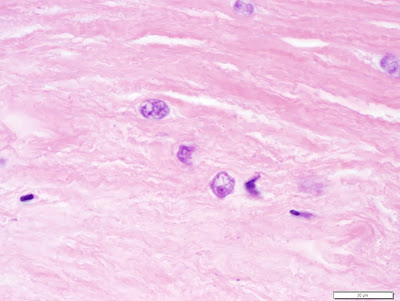 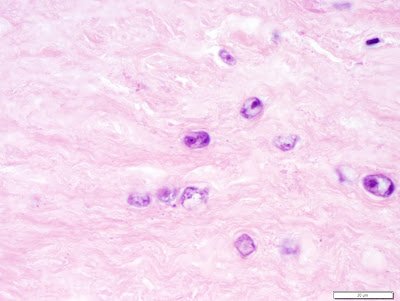 Identification?
Posted by ParasiteGal at 10:59 AM 5 comments:

Answer:  Amebic keratitis due to Acanthamoeba species.  The double-walled cysts and trophozoites are characteristic: 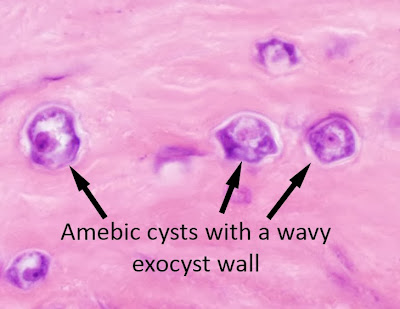 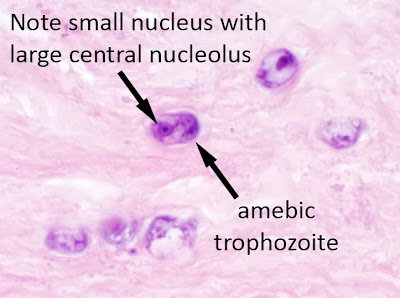 Unfortunately this patient ended up undergoing 2 corneal transplants before she finally was cleared of infection.  She now has near normal vision.  Amebic keratitis can be very difficult to treat, since the presence of a single residual cyst is enough to allow for reactivation of infection after treatment or surgery.

Greater than 90% of cases in the U.S. are associated with contact lens use, as was the case with this patient.


Posted by ParasiteGal at 9:47 AM No comments:

The following is an unstained muscle biopsy pressed between 2 glass slides.  The patient experienced myalgia and facial edema 1 week after eating bear meat. 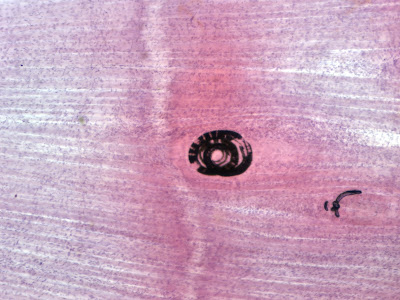 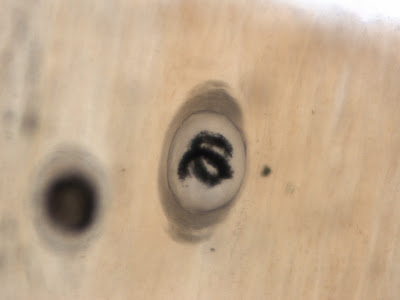 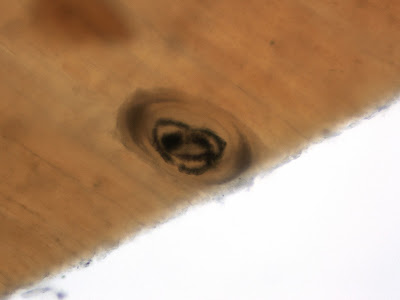 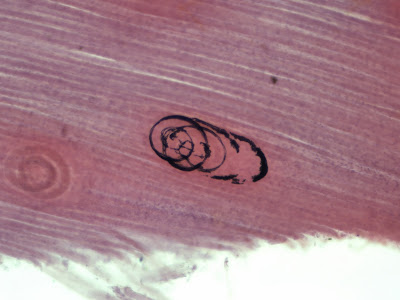 NOTE:  GOOGLE + comments now disabled!  (sorry about the trouble that caused for non-Google + users)
Posted by ParasiteGal at 8:44 PM 6 comments:

This is the classic appearance of Trichinella larvae coiled within muscle.  To answer Yenni's question, this biopsy was taken from the patient's thigh, which was quite swollen and inflamed.  In autopsy specimens, good locations to look for Trichinella spp. larvae are the diaphragm and tongue.

As correctly pointed out by Anonymous, we cannot tell the species simply by looking at the larvae in biopsy, although it is possible to place the nematode in either the encapsulated group (e.g. with Trichinella spiralis) or the unencapsulated group (Trichinella pseudospiralis).  A number of species have been detected from human cases in the U.S. including T. nativa, T. spiralis, and Trichinella T6.

bks asked about the risk of acquiring trichinosis from undercooked store-bought pork in the U.S.  The good news is that the risk is extremely low, due to federal regulations (e.g. pigs cannot be fed uncooked meat or raw garbage) and meat inspections by the USDA.  Instead, the greatest risk is from eating the meat of wild carnivores such as bear, wild pig, boar, fox and cougar.  This is in marked contrast to the risk worldwide which is still due to eating pork.

To prevent trichinosis, it is best to thoroughly cook your meat (internal temperature of 160°F (71°C)). Of interest, curing and salting or freezing will kill most, but not all larvae, and some larvae are freeze-resistant. Yikes!  Best to cook thoroughly, not using a microwave due to the uneven heating that may result.

And now a poem from Blaine Mathison, sampling RUN DMC!


Lesson learned, my rhymes are not just anecdotal
Posted by ParasiteGal at 10:47 AM No comments:

Fluid was aspirated from 2 liver cysts in a middle aged Iraqi woman and sent to the Clinical Parasitology lab for identification.  The following were seen using 400x magnification: 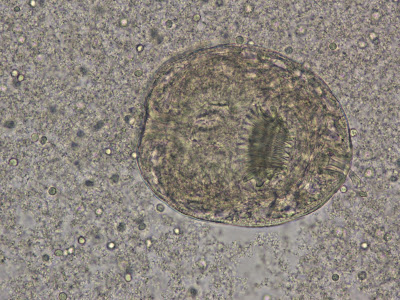 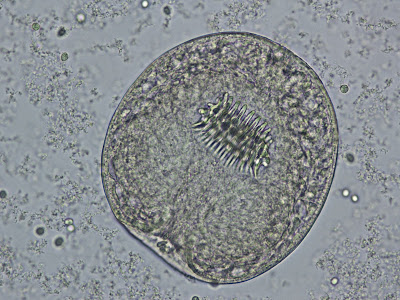 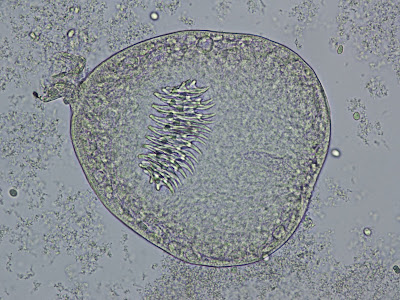 Thank you all for writing in.  I agree that this is, statistically speaking, Echinococcus granulosus infection, although from just the microbiology findings, I would report this out as Echinococcus species, given that E. multilocularis and other Echinococcus species could have a similar presentation early on.

The key to diagnosis of echinococcosis is identification of the characteristic protoscoleces with internalized hooklets. 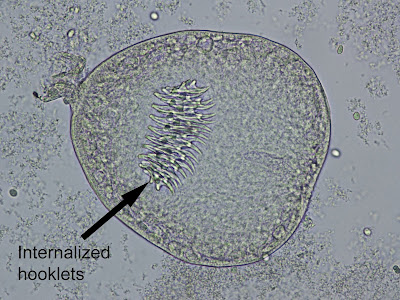 In the canine host, the hooklets will evert and attach to the intestinal epithelium, with subsequent development into an adult worm.


And now our fun poem from Blaine Mathison!

Along the banks of the Euphrates River
An Iraqi woman started to shiver
Abdominal pain she did feel
Like a jab in the side with cold hard steel
For she had an Echinococcus cyst growing in her liver.
Posted by ParasiteGal at 8:38 PM No comments: