Dear Readership of Creepy Dreadful Wonderful Parasites,
May you have a wonderful holiday season with friends and family! Thank you for your continued support and comments.

Here is the 'case' for this week - a simple identification: 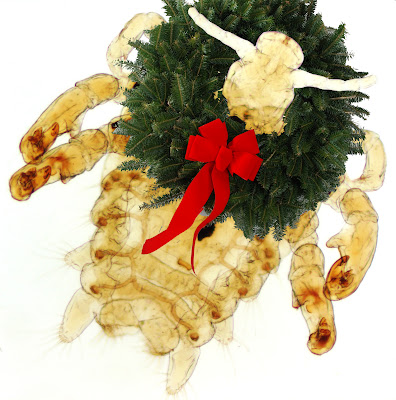 The following objects were found in the clothing of an 18 month old child. They measure approximately 3mm in length. 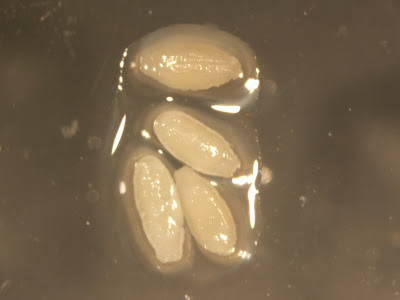 By manipulating them with a wooden applicator stick, the following was expressed out of these objects (CLICK ON IMAGES TO ENLARGE): 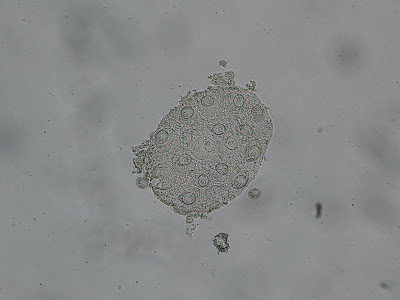 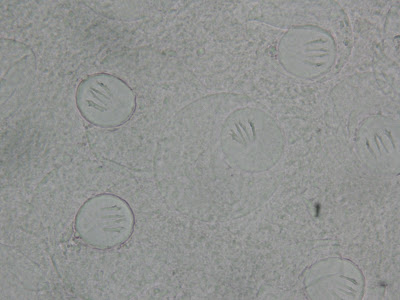 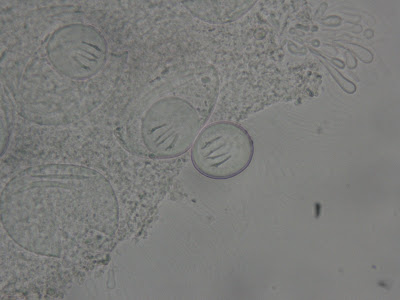 Thanks to Emily in my lab for these beautiful photos!
Posted by ParasiteGal at 10:18 AM 7 comments:

This small tape worm is acquired through ingestion of infected Ctenocephalides spp. fleas, prompting one of my readers to ask if the child got infected by ingesting the specimen from the previous case of the week! Another reader, MicrobeMan, had a similar inquiry "Was it merely coincidental that you posted Ctenocephalides last week? Regardless, it's very appropriate, seeing as that both adult C. canis and C. felis can carry the cysticercoid form of D. caninum to people."

To answer these questions - it was actually a complete coincidence that we happened to have a Ctenocephalides flea and D. caninum proglottids submitted to my lab in such a short time period of time, and I wasn't really considering the coincidence when posting these 2 cases. So good pick up for those of you who noticed!

I like this case because it has several classic features which allow for definitive identification. The small "rice grain" sized and shaped proglottids are classic, and the egg packets that were expressed from the proglottids are diagnostic, despite being immature. Note that the material surrounding the eggs is very granular, which is something I've seen frequently when eggs are prematurely expressed from the proglottids, rather than being released naturally. So don't let that deter you from making a diagnosis if the other characteristic features such as egg packets and hooklets inside of egg-like structures are present 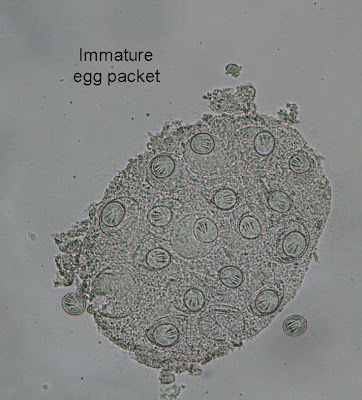 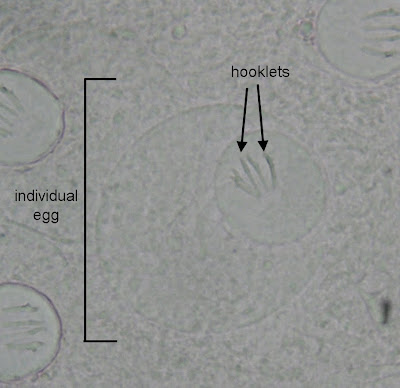 Posted by ParasiteGal at 12:06 PM No comments:

Since I am at the ASTMH annual meeting at the moment, I will keep this case short and sweet:

The following was submitted for identification to the clinical parasitology laboratory. It was difficult to get it to hold still, since it was jumping between lids of a closed petri dish. It measures approximately 2 mm in length. (CLICK ON BOTTOM RIGHT OF MOVIE TO ENLARGE)

Posted by ParasiteGal at 2:51 PM 5 comments:

Everyone who wrote in got this correct, despite the fact that the flea wasn't really staying still. We eventually took Blaine's advice and killed it (by placing it in ethanol). We then mounted it on a slide and got a much clearer picture of the flea, showing the genal and pronotal combs that are characteristic for Ctenocephalides species: 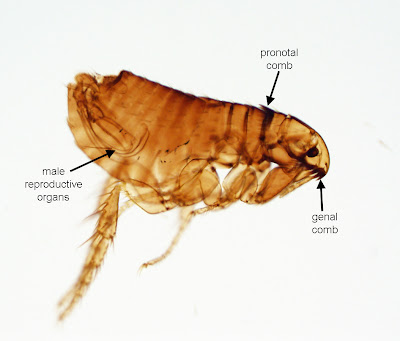 The dog and cat fleas (Ctenocephalides canis and C. felis respectively) can be further differentiated based on the shape of their head and "tooth" length of the genal comb.
Posted by ParasiteGal at 8:05 AM No comments: