The following peripheral blood film was obtained from a patient living in Missouri. Besides being an outdoorsman, he had traveled extensively in the past year, and visited many parts of Africa and Asia. 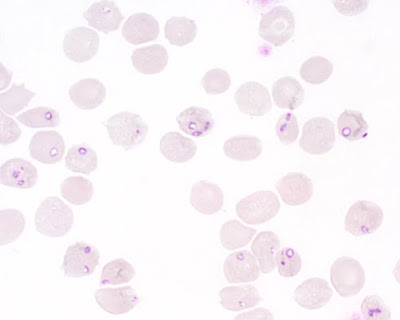 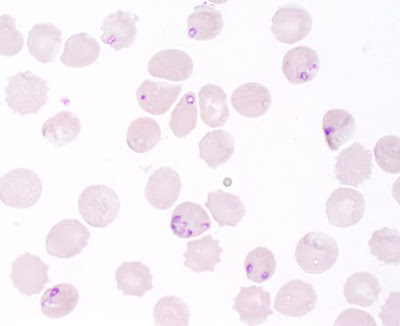 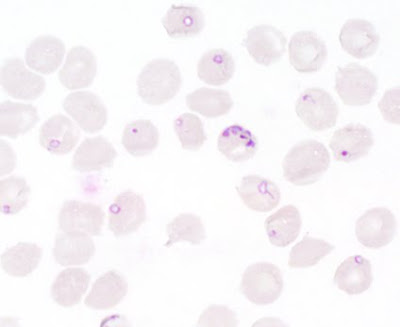 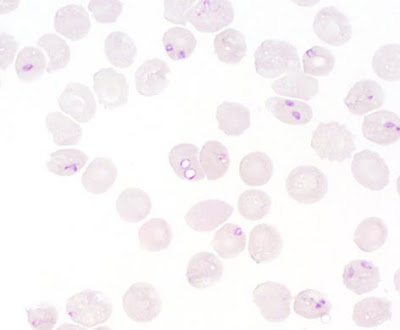 Answer: Babesia spp. As I noted previously, this patient was from Missouri, and was found to have the newly described MO-1 strain. Notice the multiply infected RBCs and atypical forms which are characteristic for infection with Babesia spp. Several viewers suggested Plasmodium falciparum as an alternative. This is definitely in the differential diagnosis, since they can both demonstrate high parasitemia, multiply infected RBCs, and small delicate rings on peripheral blood smear. Also, intermediate stages (e.g. schizonts) are almost never seen in P. falciparum infection, and never seen in Babesia infection. This overlap in morphologic features can create quite a challenge in distinguishing the 2 infections.

However, babesiosis can be distinguished from malaria (P. falciparum infection) by the following features:
1. Babesia has frequent extra-cellular forms.
2. Size variability of ring-forms is often marked.
3. Rings are often atypical, and include spindle, oval, round, and double rings forms. I've also noticed a high frequency of "tennis racket-shaped" rings, where a "handle" is present on the ring. 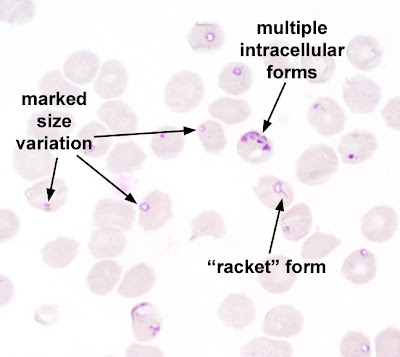 4. Finally, the rarely seen tetrad, or maltese cross, is diagnostic of babesiosis. This was also seen in this case, but I had excluded this image originally so I wouldn't give the answer away immediately! 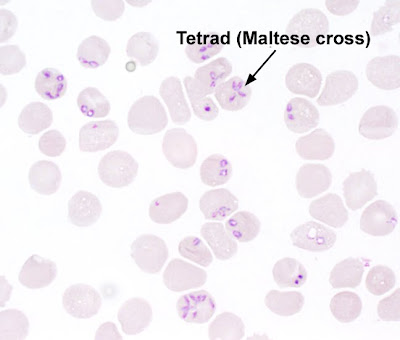 Despite the newly describes Babesia variants, the most commonly reported species in the United States is stillBabesia microti.
Posted by ParasiteGal at 3:17 PM 1 comment:

A patient with recurrent high grade lymphoma on an extensive chemotherapeutic regimen presented with increasing shortness of breath and consolidation on chest radiograph. Antibiotic therapy was unsuccessful and she expired. Autopsy of the lungs showed the following on hematoxylin and eosin staining (CLICK ON IMAGES TO ENLARGE): 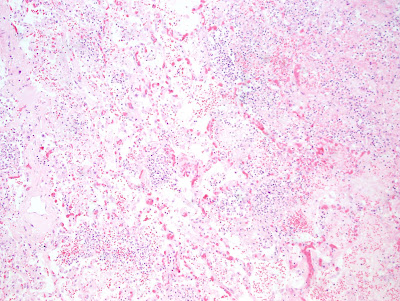 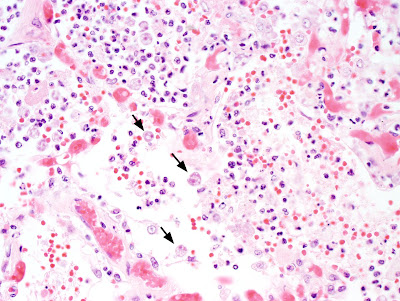 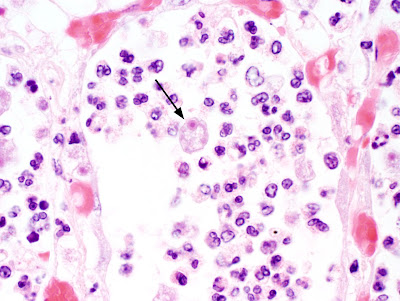 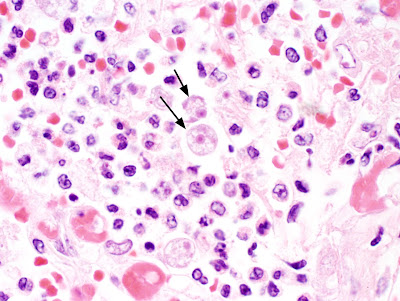 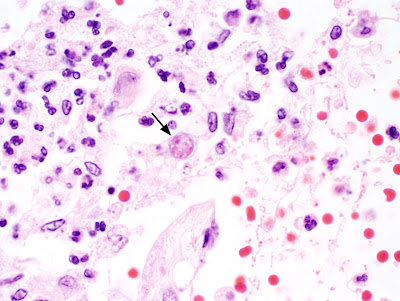 Diagnosis of this unfortunate case?
Posted by ParasiteGal at 4:29 PM 3 comments:

Answer: Amebic pneumonia; most likely due to Acanthamoeba spp. or Balamuthia mandrillaris.

This is a rare manifestation of disease with the free-living amebae. More commonly, Acanthamoeba spp. cause amebic keratitis - typically in contact lens wearers. However, this organism and B. mandrillaris can rarely gain access to the systemic circulation of immunocompromised (and occasionally immunocompetent) individuals and travel to the brain, where it causes granulomatous amebic encephalitis. The lungs and skin are thought to be primary sites of entry into the body. 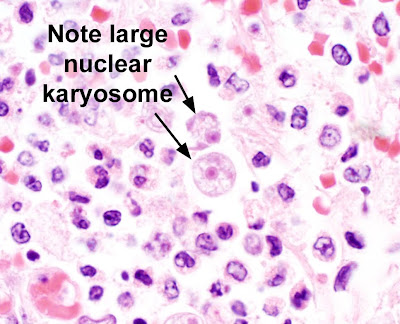 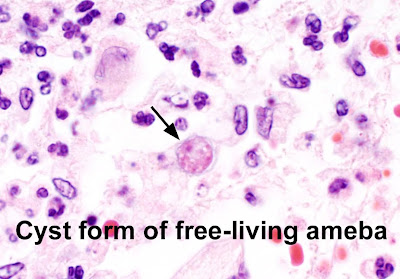 Thanks to everyone who took a chance and wrote in on this challenging case!
Posted by ParasiteGal at 4:20 PM No comments:

Since this is Case 101, I figured I would give a case that is suitable for "parasitology 101". Hopefully, you will all enjoy this straight forward case: 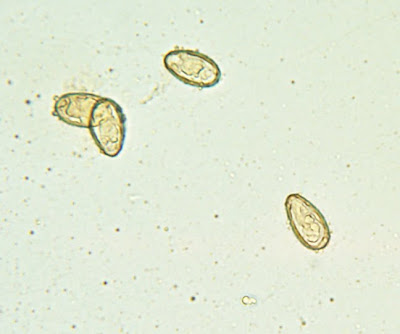 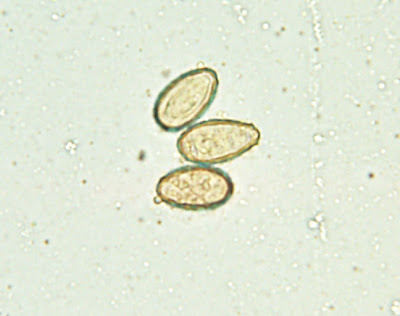 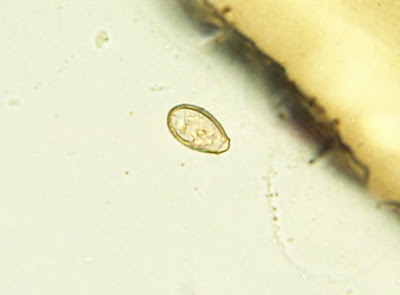 Posted by ParasiteGal at 5:04 PM 5 comments:

Answer: Clonorchis/Opisthorchis spp. eggs.
These 2 eggs are very difficult to tell apart and are usually grouped together, although the shoulders of the shouldered operculum may be more pronounced with Clonorchis eggs.
Posted by ParasiteGal at 4:24 PM No comments:

The follow sections of colon were taken from a Mexican farmer who presented with acute bowel perforation. Numerous deep and confluent ulcers were seen along the length of the colonic mucosa. 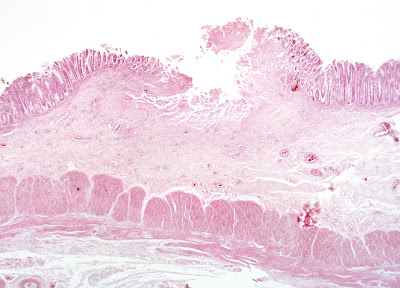 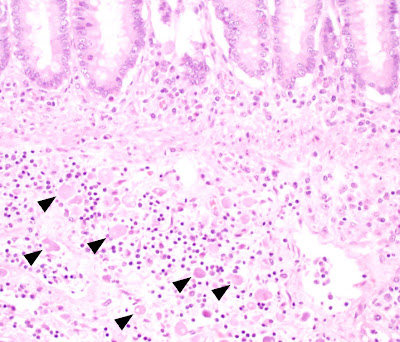 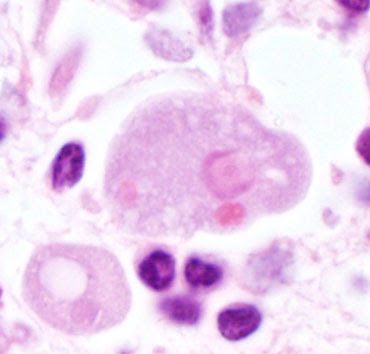 Answer: Amebiasis. This disease is caused by j
E. histolytica, a protozoan parasite.

Most of you recognized the classic "flask shaped" ulcer at low magnification (below). 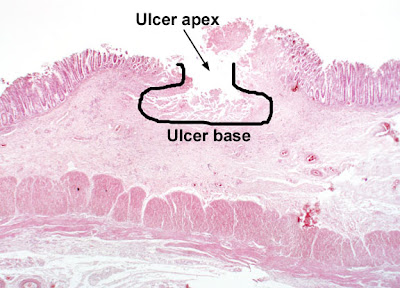 This type of ulcer is so named because its base is wider than its apex.


At higher magnification, numerous trophozoites can be seen at the leading edge of the ulcer. Under oil, the nuclear features are difficult to make out, but you can tell this is the "ring and dot" chromatin pattern or E. histolytica and that there is an ingested RBC in the cytoplasm. 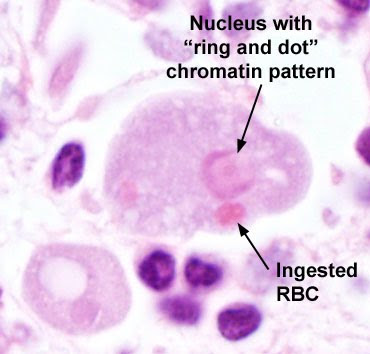 Heather mentions that histologic sections are particularly difficult to interpret for parasitologists who are not used to seeing them. That's definitely true. While I don't have any methods for interpreting all different types of tissue sections, I will say that it gets easier with time, as you become familiar with some of the key features for each parasite. In this case, the "flask-shaped ulcer" and trophozoites with ingested RBCs are diagnostic. Don't give up! I'll keep pointing out the key features, and you will get used to seeing a spectrum of histopathology over time.
Posted by ParasiteGal at 4:53 PM No comments: