In going through our archives the other day, I found this absolutely stunning slide.  I believe it is stained with a modified Trichrome stain, although the purple coloration is very striking.
Click on the images to enlarge - they're even better in large format. 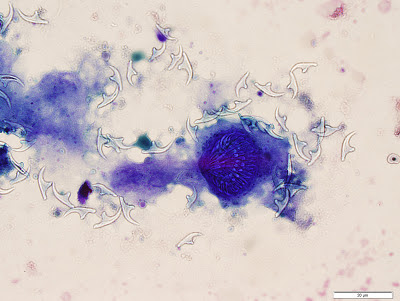 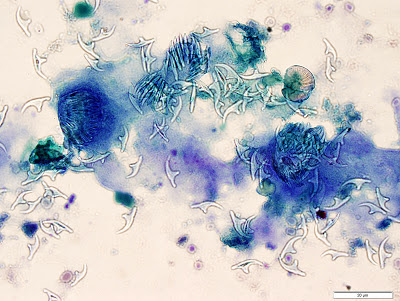 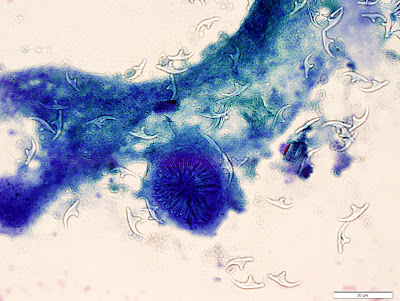 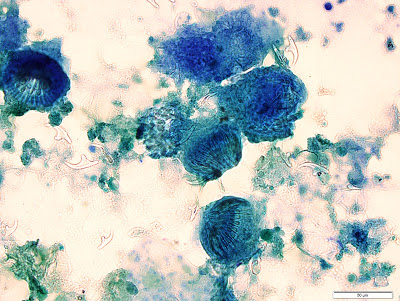 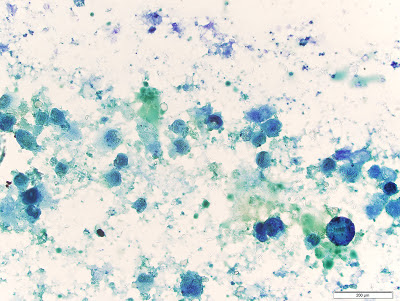 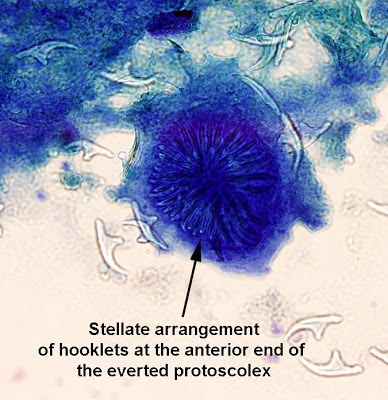 Anonymous mentioned that "Many pathologists will miss this on real cases unless we see the scolices which stain!! We generally like flatter lower contrast microscopy and, forgiving poor nomenclatures, have our condensers relatively wide open."  It is true that traditional surgical pathologists will keep their condensers wide open to let in as much light as possible and may therefore not appeciate all of the refractile hooklets.  Therefore, I remind all of my residents and fellows that narrowing the condenser will bring out all of the features of hooklets, eggs, and arthropods in tissues.  It's a little 'trick' that I learned years ago.

Aileen M Marty also reminds us that Ziehl-Neelsen will shown that many of the hooklets are acid-fast.  I wish I had a good example of this to show you.  If anyone would like to donate a case with acid-fast hooklets, I would love to share it!

Posted by ParasiteGal at 11:37 AM No comments:

This beautiful photograph was donated by Susan Crowe, a professional wildlife photographer and friend of one of our parasitology blog colleagues (Lee).  She found this presumptive Dermacenter sp. tick on her dog. 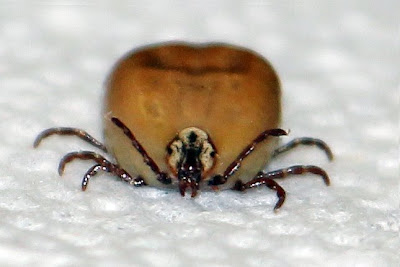 So the question for the day - what is possible pathogen that this tick can transmit in the U.S.?

As some of the readers mentioned, Ehrlichia chaffeensis and E. ewingii (as well as Anaplasma phagocytophilum) have also been found in D. variabilis, although this tick is not likely a common or effective vector of these bacteria.

From Blaine Mathison:
A hunter returned after trapping for beaver
And found Dermacentor on his golden retriever!
some risks from the tick he could foresee,
The worst being Rickettsia ricketsii,
the causal agent of Rocky Mountain spotted fever
Posted by ParasiteGal at 1:10 PM No comments:

Thank you to Anna and Madi that kindly donated these cases!
Posted by ParasiteGal at 3:03 PM 5 comments:

"Detached ciliary tufts (remnants of ciliated epithelium) seen in a variety of body fluids, especially peritoneal, amnionic, and respiratory specimens; they are motile and can be confused with ciliated or flagellated protozoa."


As per anonymous, "The common cytology classical name for the larger groups is creola body and they are said to be typical of asthma which I would take with a grain of salt."  I always loved seeing creola bodies in cytology preparations.  I agree about the association with asthma; it may be commonly seen, but I don't know if anyone has done a study on the sensitivity and specificity of this finding with asthma, and you might also see creola bodies with other inflammatory conditions.

Thank you all for the comments!

Now here is a fun little poem from Blaine Mathison:
(He acknowledges that it isn't entirely anatomically correct)
There once was a man from Andorra
who had a case of ciliocytophthoria!
From the depths of his lung,
to the tip of his tongue,
they’re dancing the hora with his respiratory flora
Posted by ParasiteGal at 5:10 PM No comments:

The following movie was generously donated by Dr. Sheldon Campbell and set to music by my husband (who was also responsible for naming the file the "creep of the week"):

Identification?
Posted by ParasiteGal at 9:20 AM 5 comments:

This little arthropod can be readily identified by its elongated body (which is dorso-ventrally flattened, like someone stepped on it), lack of wings, and 'raptorial' legs adapted for grasping hair shafts.

Interestingly, you can't reliably tell head lice and body lice apart morphologically, and you might be tempted to think that they are the same organism.  However, in nature they occupy very distinct geographical niches (body and clothing vs. head respectively) and they will only breed with each other under laboratory conditions.

In this case, Vanessa pointed out that "You could make a tentative argument for it being a head louse rather than a body louse as it's still alive. Body lice die very quickly off the host and I think head lice are slightly more resilient."  Also, head lice are much more common in the U.S. (particularly in school-aged children), whereas body lice are found in settings of war, extreme poverty, and homelessness, thus making this specimen more likely to be a head louse.

Florida Fan noted quite correctly that this is a male rather than a female because it has a rounded rather than notched posterior end.

You can very easily tell Pediculus sp. lice apart from their pubic lice counterparts by their body size and shape as shown below: 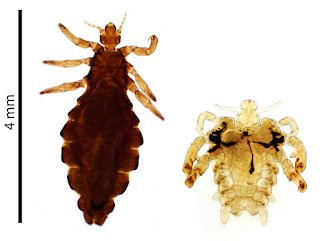 Figure:  A body louse (left) and pubic louse (right).  Note the notched posterior end, indicating that these are female specimens.

Now, for our poem by Blaine Mathison:

War! It’s such a nasty political device!
Regardless of the outcome everyone pays the price!
Are you exhibiting a rash and feeling icky?
Well, you may just have Rickettsia prowazekii
Caused by an outbreak of Pediculus, a.k.a. body lice

Posted by ParasiteGal at 2:32 PM No comments:

The following were found in a cod fillet from a grocery that prides itself on "fresh, never frozen" fish.  When these were brought to the attention of the grocery store staff, they were not surprised, and instead saw this as an indication of how fresh their fish were!

Remember folks - Cook your fish until the flesh is white and flaky (for white fish) or freeze it thoroughly before serving it raw or rare!

Many thanks to Henry Bishop and Blaine Mathison who were kind enough to share these videos with me.
Posted by ParasiteGal at 9:49 AM 7 comments:

Answer:  Agent of anisakiasis; either Anisakis sp. or Pseudoterranova decipiens

These movies, along with many other movies, live specimens, slides, and fixed specimens are included in the labs of the UMN Global Health Course.  This CDC co-sponsored course is given every year and includes 3 parasitology labs taught by me and Blaine Mathison.  Check it out their web site for more information!  www.globalhealth.umn.edu/education

Posted by ParasiteGal at 9:24 AM No comments: