Happy Thanksgiving to all of my readers in the United States!  In appreciation for this day of celebration (which usually involves the sharing of delicious food with family and friends), I've decided to have a food-based case, which doesn't technically involve a parasite, but rather the relative of some human parasites.

The following is a French hard cheese that has been aged for 1 year.  It is known for its deep orange color and rough rind which both make it resemble a cantaloupe. 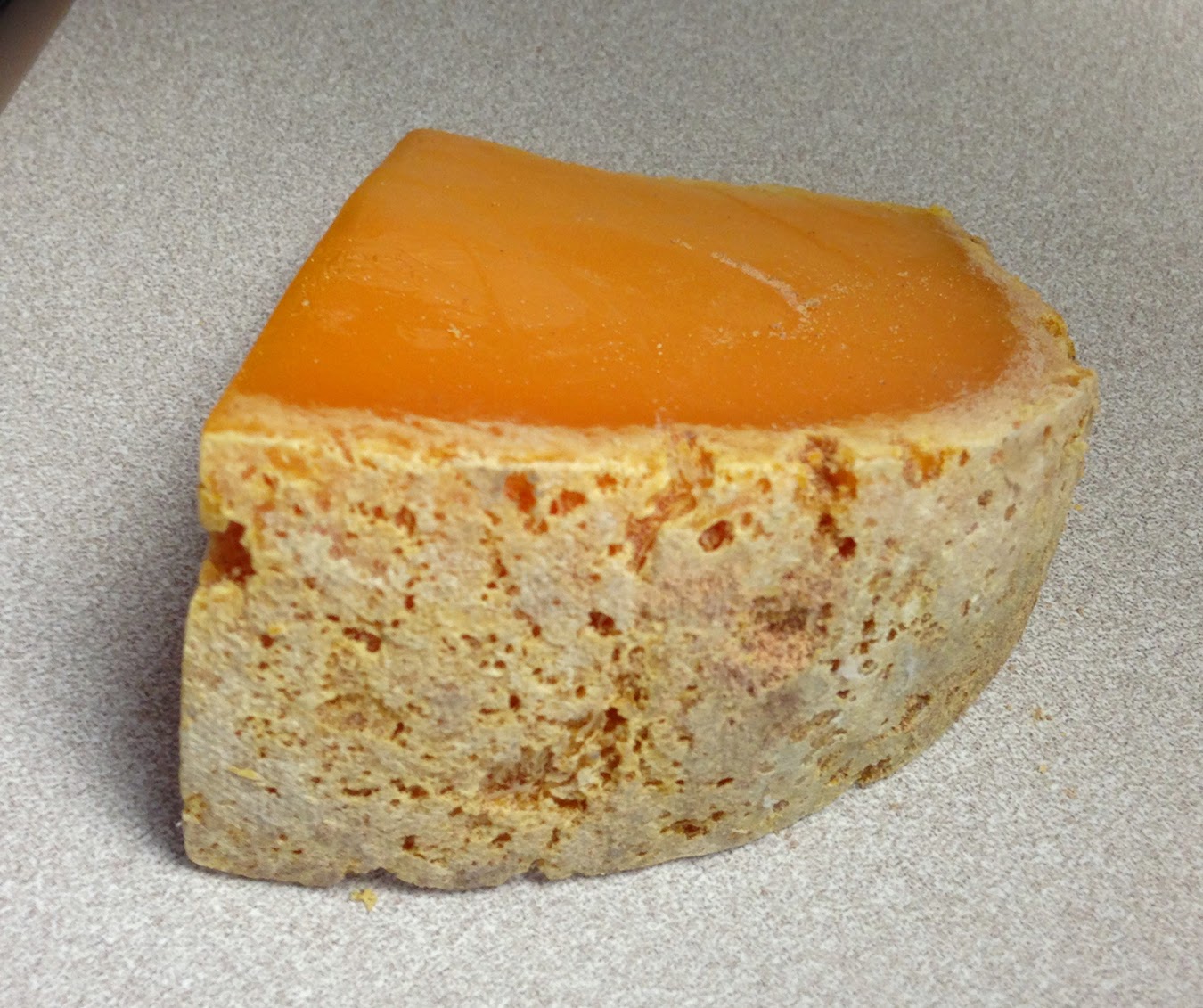 Close up of the rind: 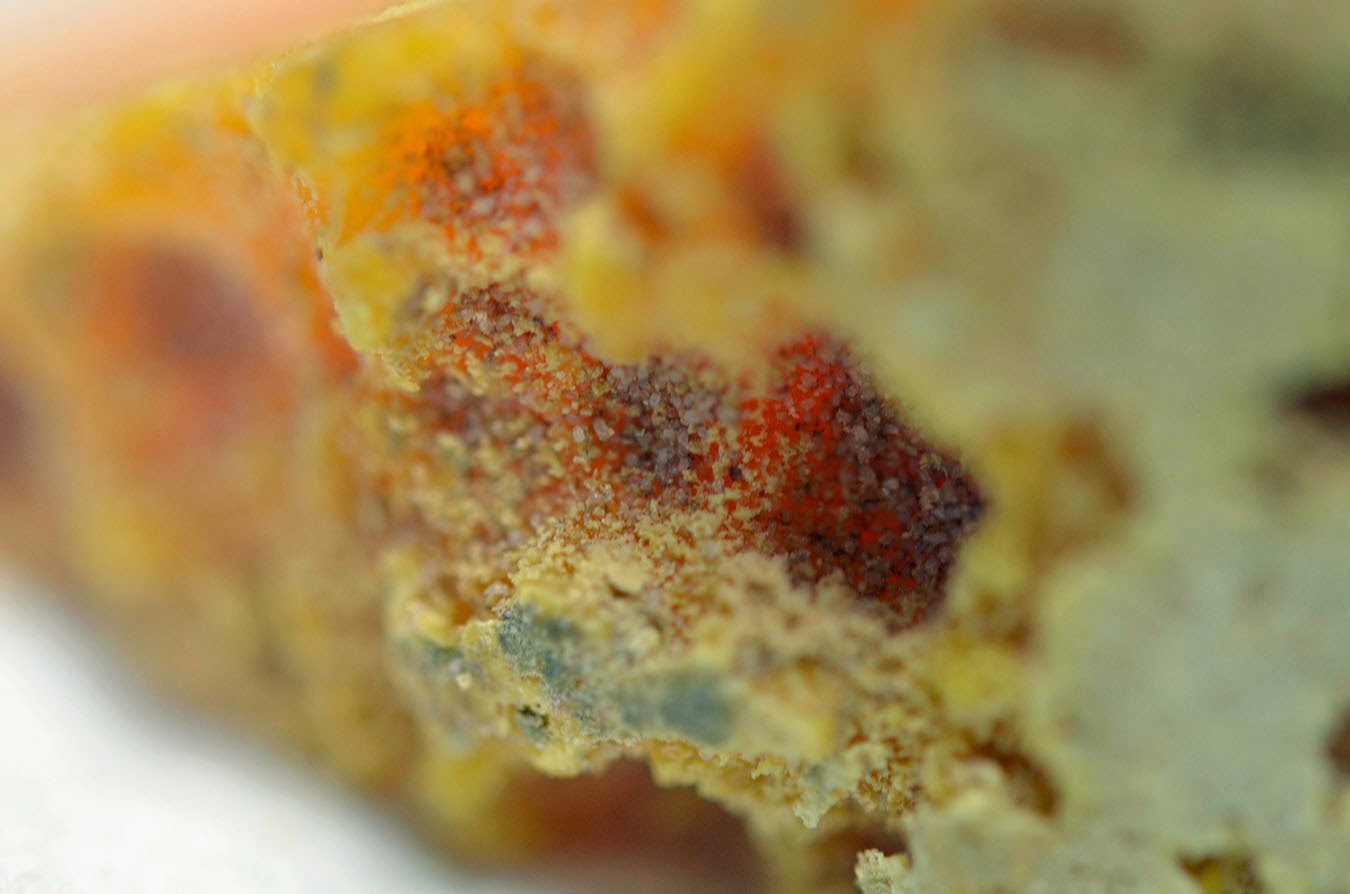 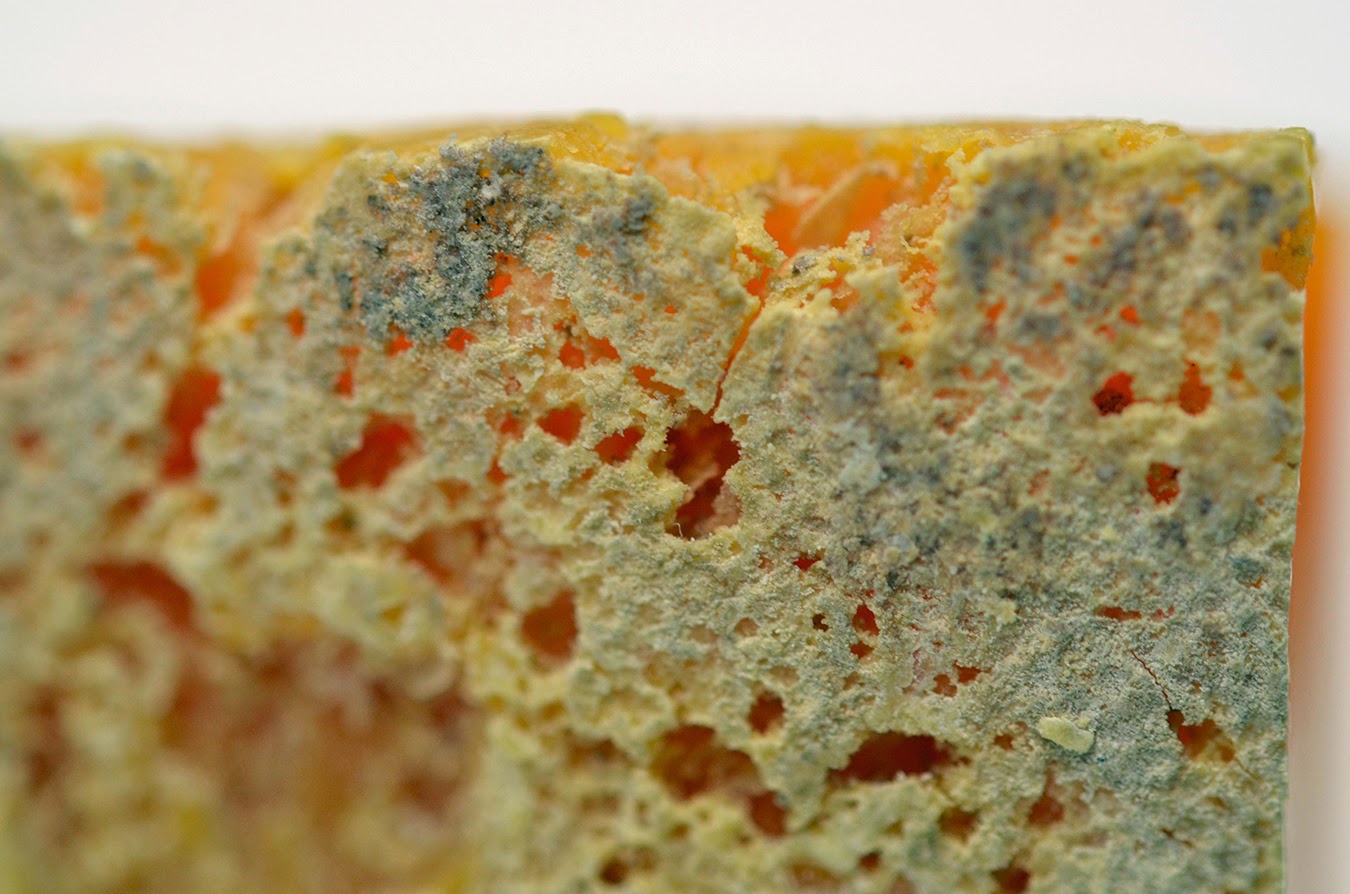 By scraping the rind and placing the scrapings, along with a drop of saline, on a glass slide, you see the following: 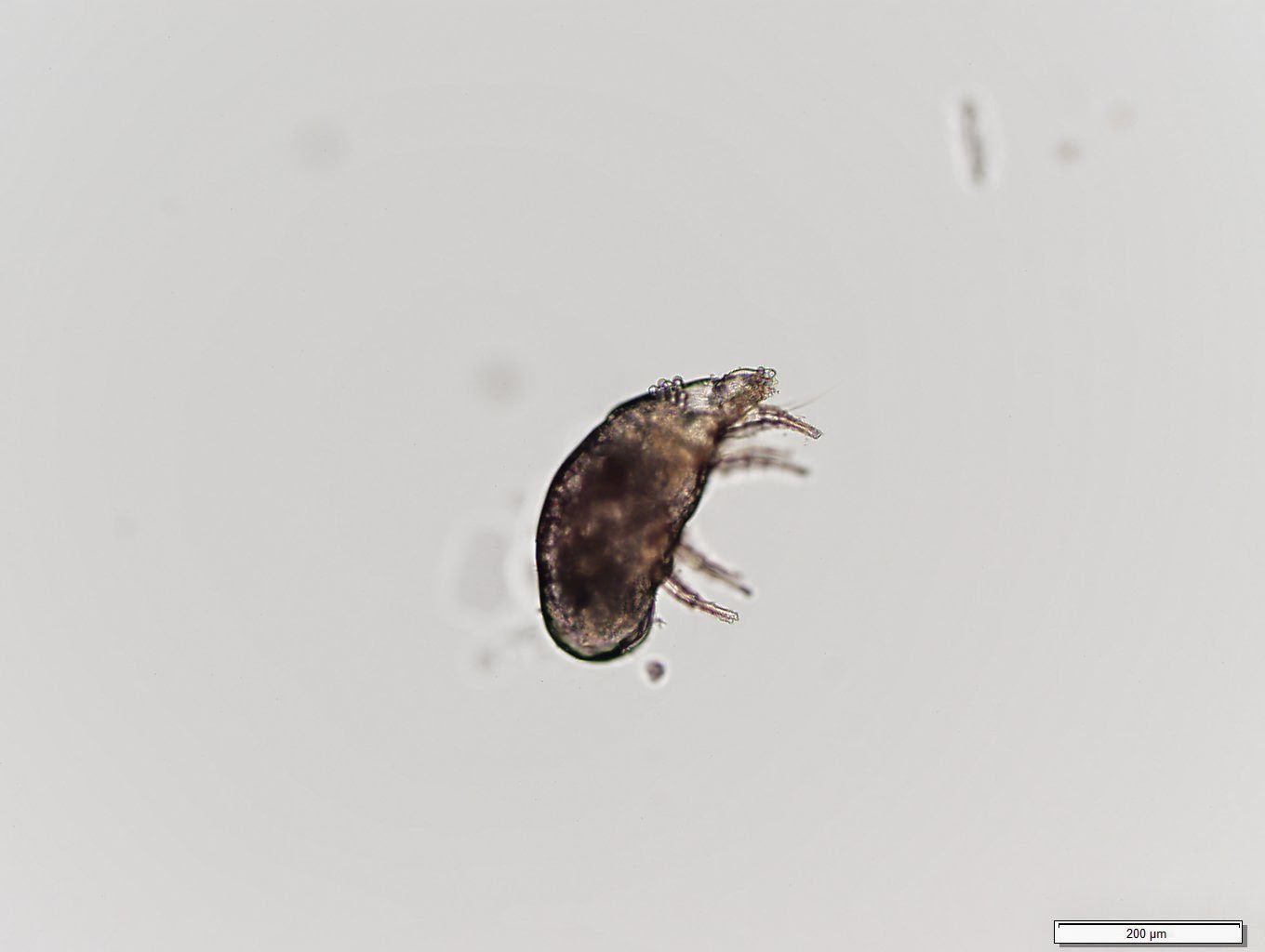 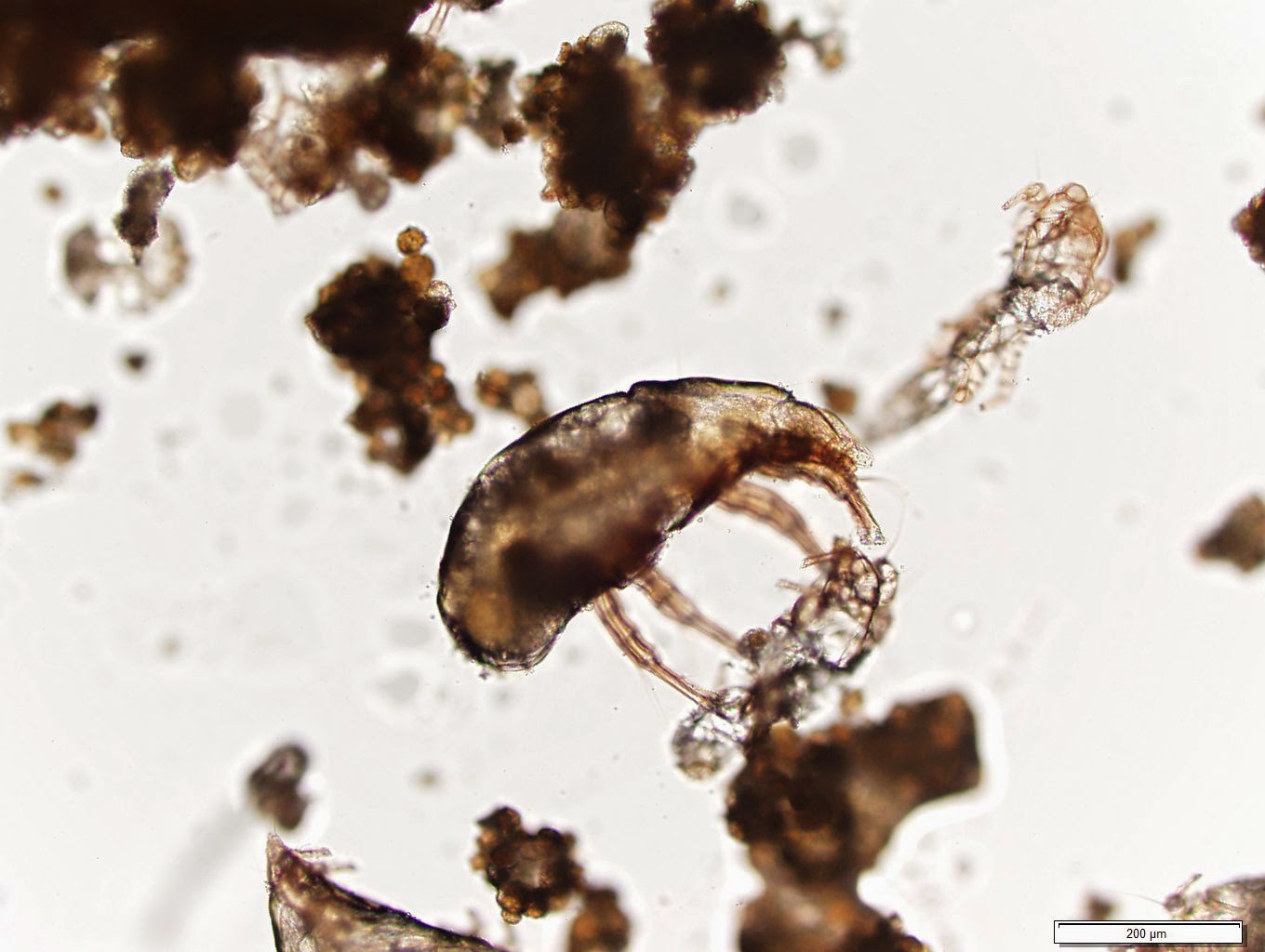 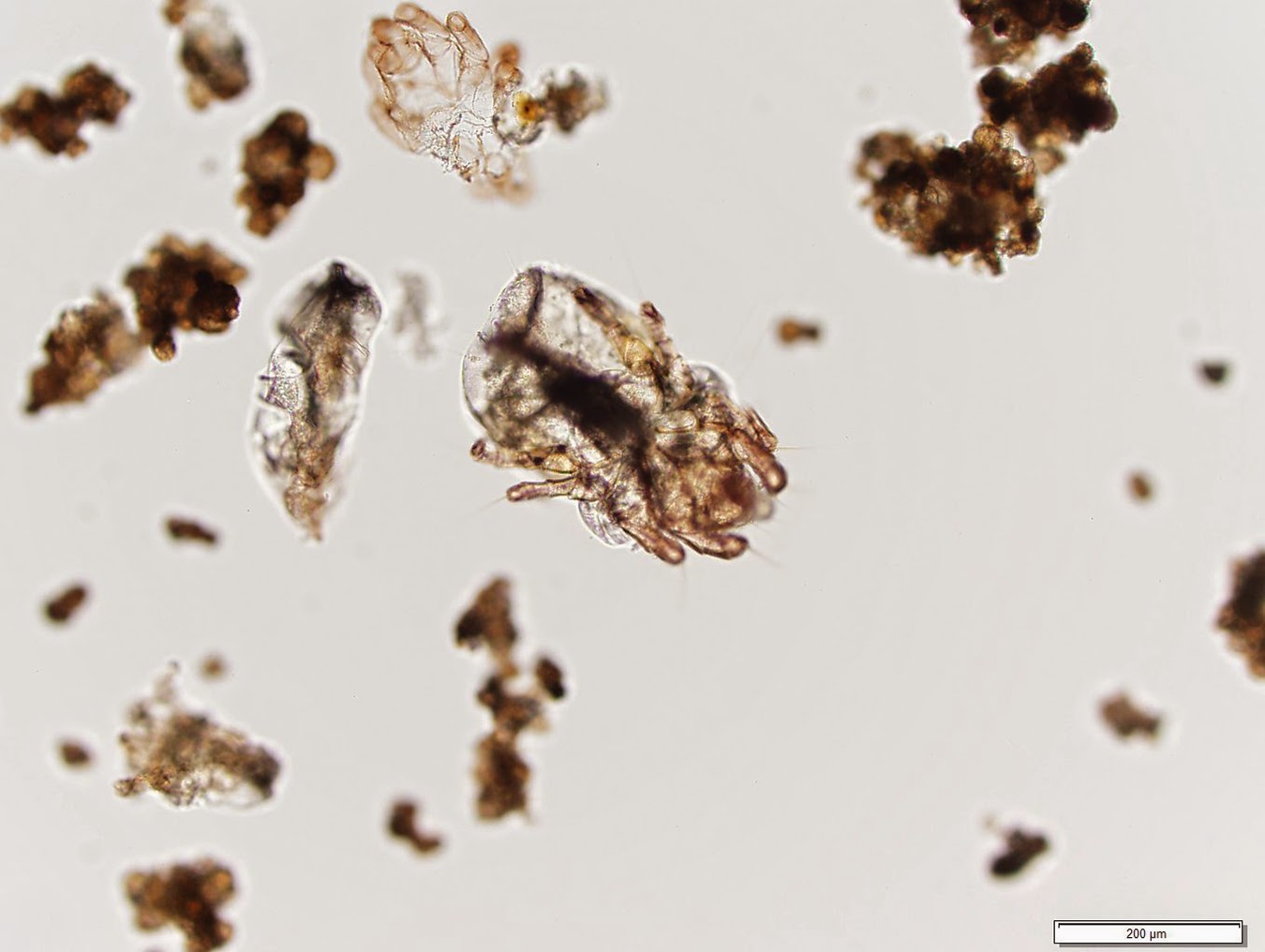 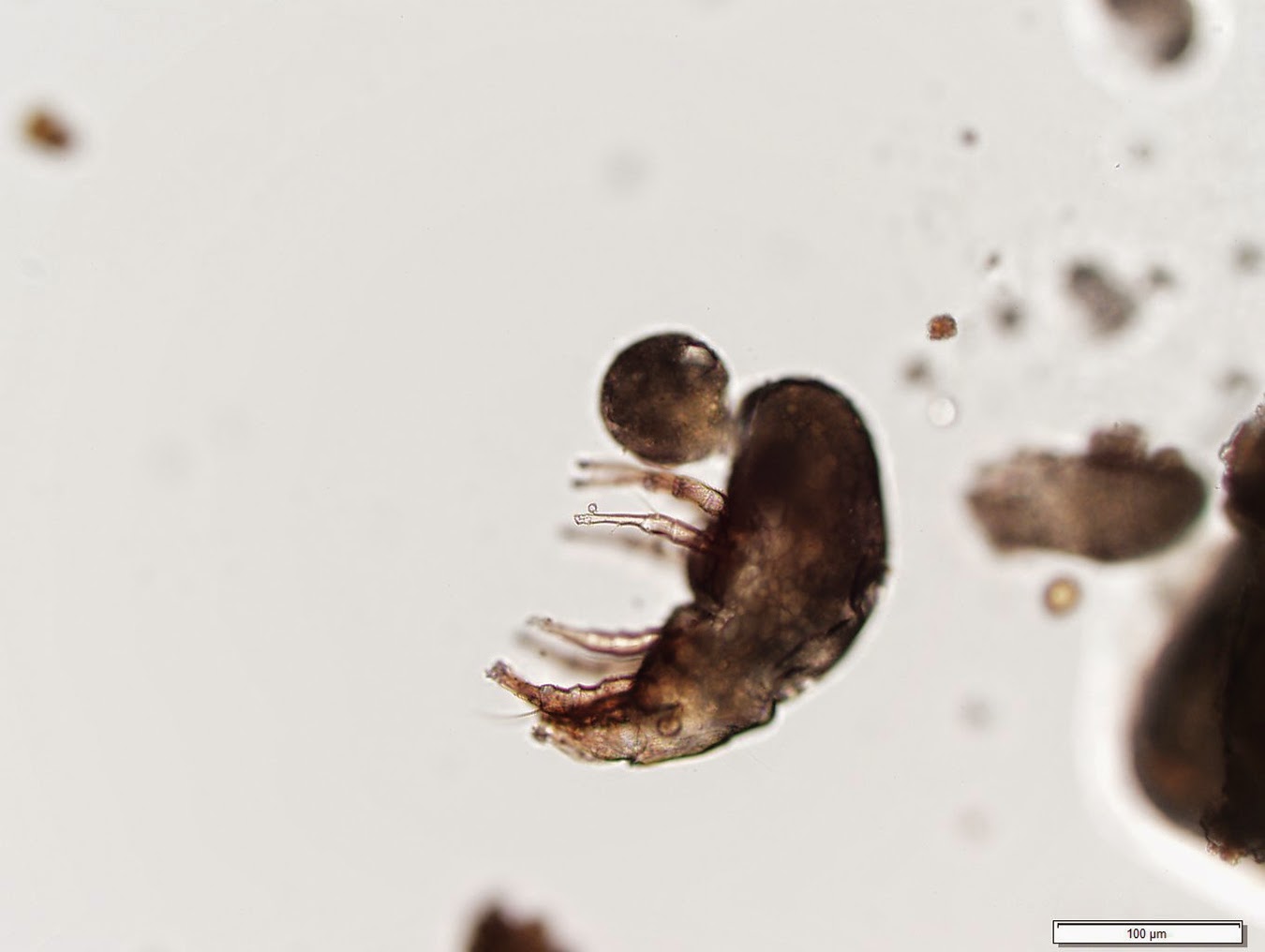 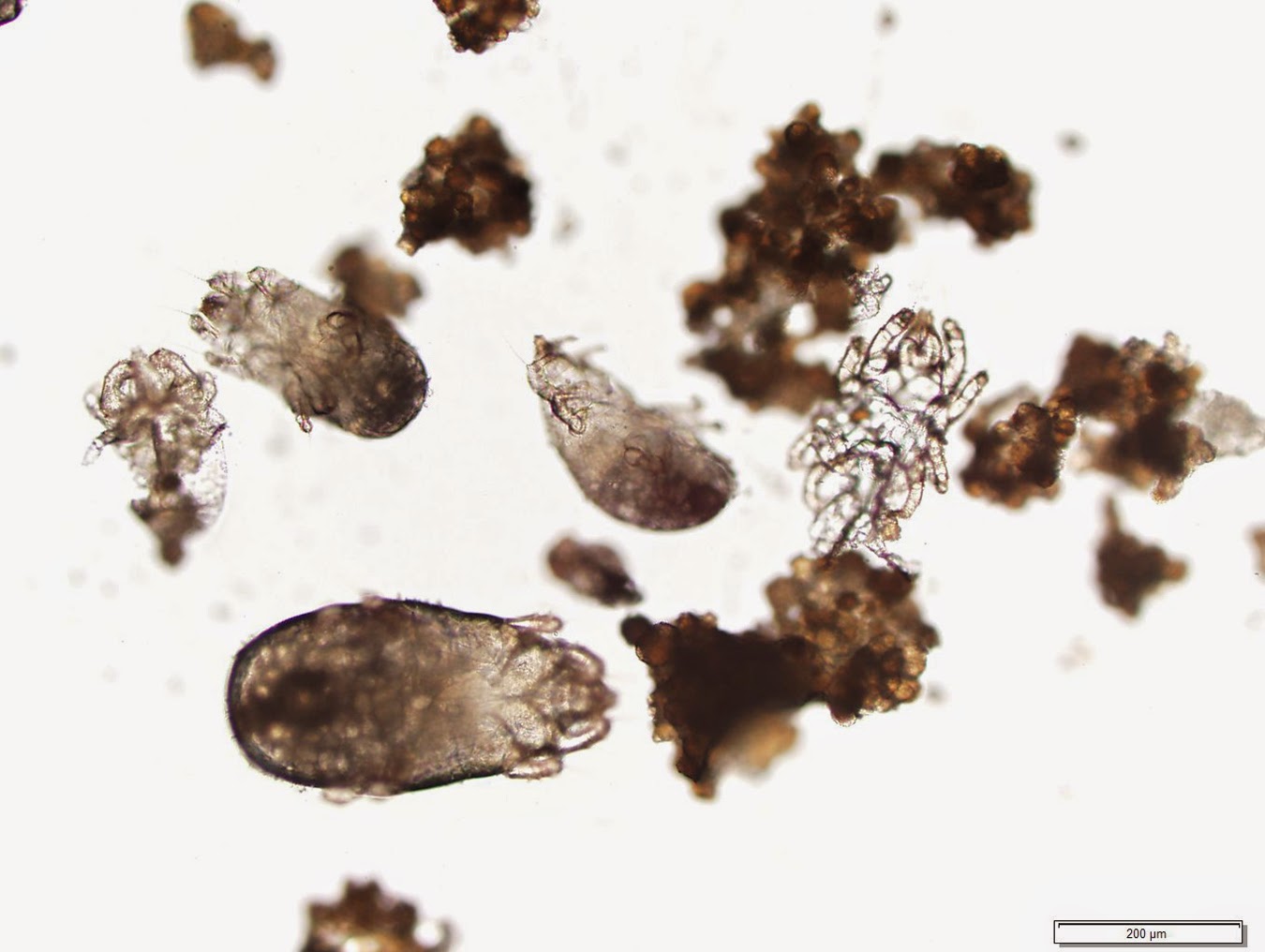 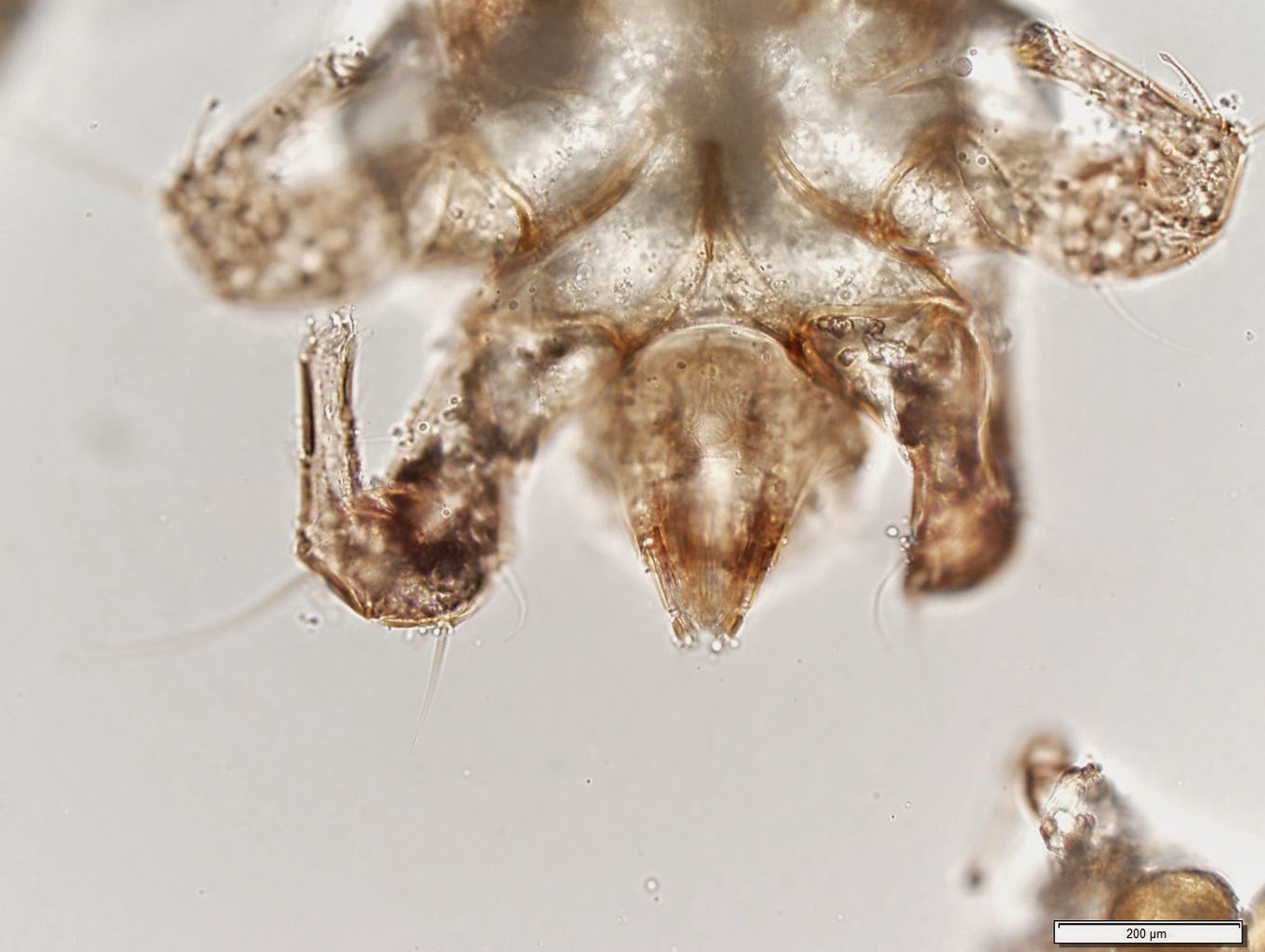 Identification of these arthropods?
(I hope this doesn't turn anyone off of cheese!)
Posted by ParasiteGal at 11:41 AM 8 comments:

Answer:  Cheese mites!  Specifically Acarus siro, the mites used to create the very distinctive crust and taste of this French cheese called Mimolette.  Mimolette cheese is colored with annatto to provide its cantaloupe" orange color, while the mites are intentionally introduced to the external surface to provide its gray crust.  The mites are thought to add to this cheese's distinctive parmesan-like flavor.

Despite some over-hyped media reports, the Food and Drug Administration has not actually banned the importation of Mimolette cheese into the United States.  However, there have been reports of halted shipments at the border due to failure of the cheese to meet regulations due to excess of mites on the cheese.  I couldn't find any reference to this on the FDA's web page, but here is a good report from National Public Radio.

Posted by ParasiteGal at 5:32 PM No comments:

Here is another great case from Dr. Orihel's collection at Tulane University.  No history, but the appearance is quite classic. Identification? 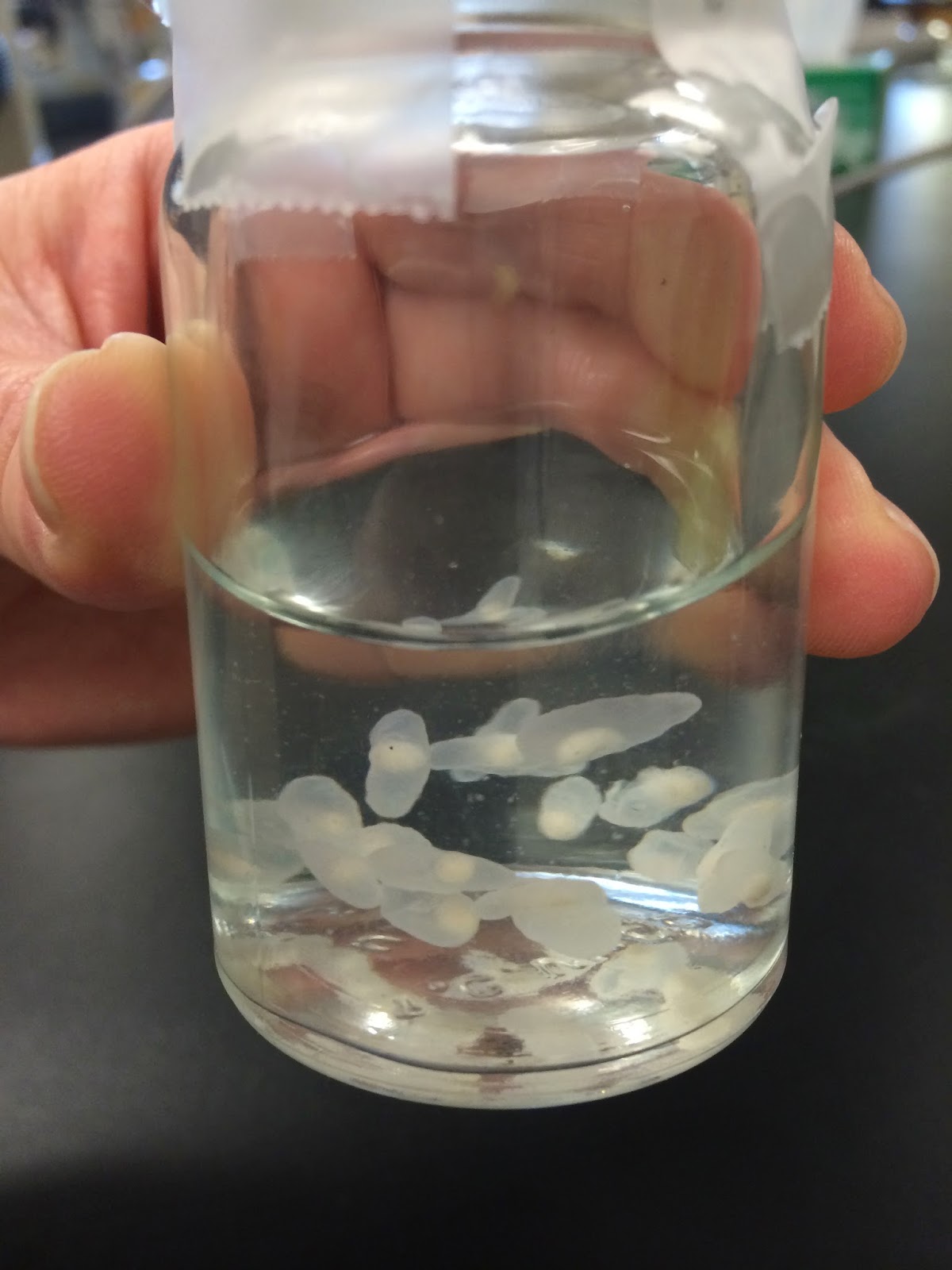 Posted by ParasiteGal at 5:49 PM 7 comments:

Answer:  Taenia sp. larvae, otherwise referred to as cysticercae (cysticercus = singular).  If these were found in a human, then they would be cysticercae of T. solium, which are commonly referred to as Cysticercus cellulosae. Thank you to everyone who wrote in with the answer.  As noted by Florida Fan, you can see a similar image in Ash and Orihel's Atlas of Human Parasitology, 5th edition, on page 371.

Cysticercae have a characteristic solid structure (the inverted scolex) surrounded by a fluid filled cavity called a bladder.  For this reason, Taenia solium is sometimes referred to as the bladder worm (although I would discourage using this terminology since it is confusing to most people). 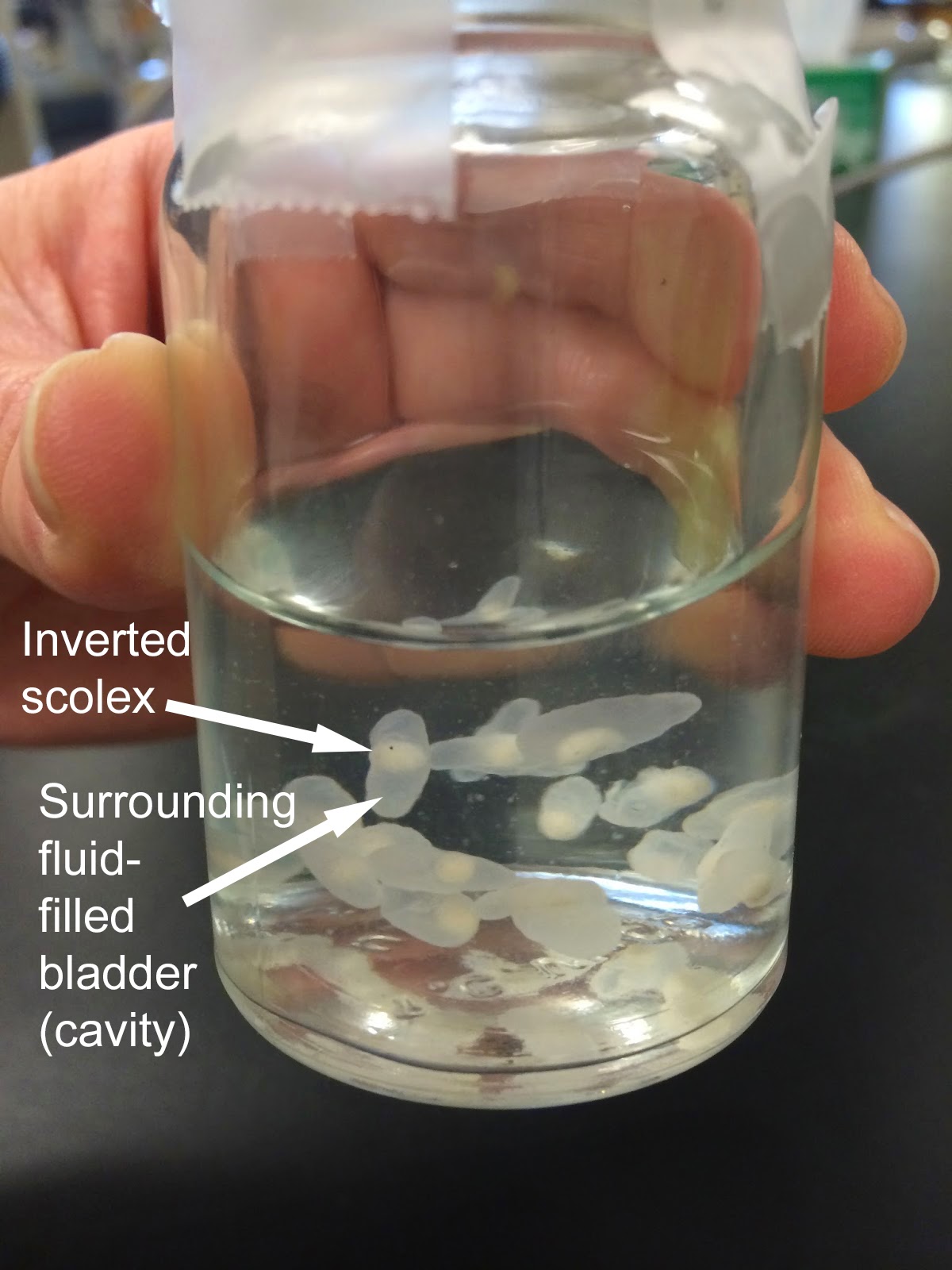 Remember that a 'bladder' is simply a fluid-filled or air-filled sac and doesn't just refer to the urinary bladder.  Other well-known bladders are the gallbladder and the fish swim bladder .
Posted by ParasiteGal at 11:14 AM No comments:

Dear Readers,
For this post, I wanted to highlight one of the fabulous cases from Tulane University, the former lab of the Parasite guru, Thomas Orihel.  I had the pleasure of putting on a Parasitology workshop last week at the ASTMH annual meeting along with Christina Coyle, Michael Libman, and Susan McLellan; Susan is an infectious disease physician at Tulane and was our host for the workshop.

The following is one of the coolest displays I've ever seen - back from the 1950s when tapeworms were submitted following treatment (often with quinacrine) to ensure that the head was expelled. On an interesting historical note, quinacrine is not thought to have vermicidal activity, but causes the head to detach so that the worm can be expelled.  Its use has now been replaced by praziquantel and other more effective medications for treatment of cestode infection. 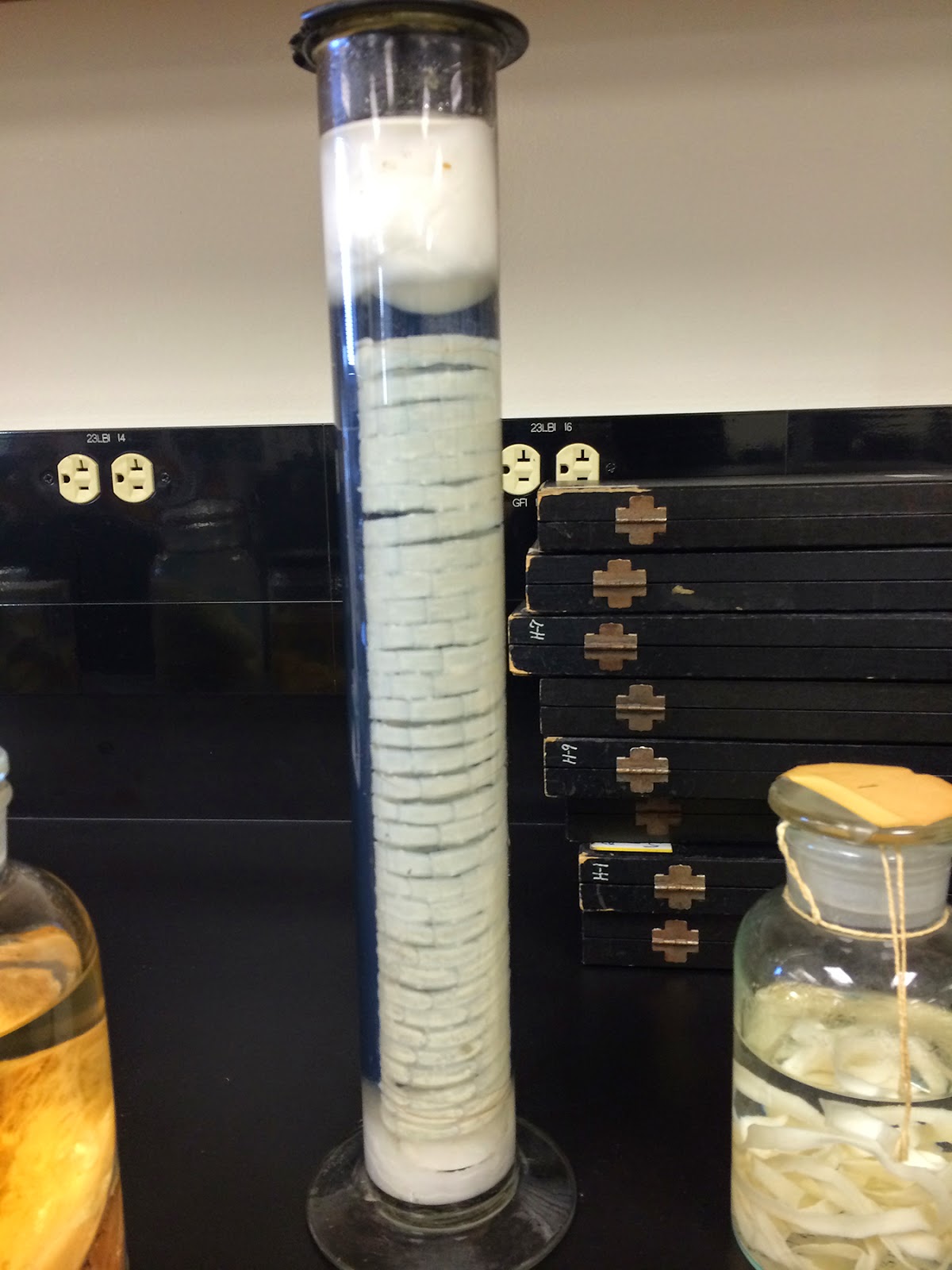 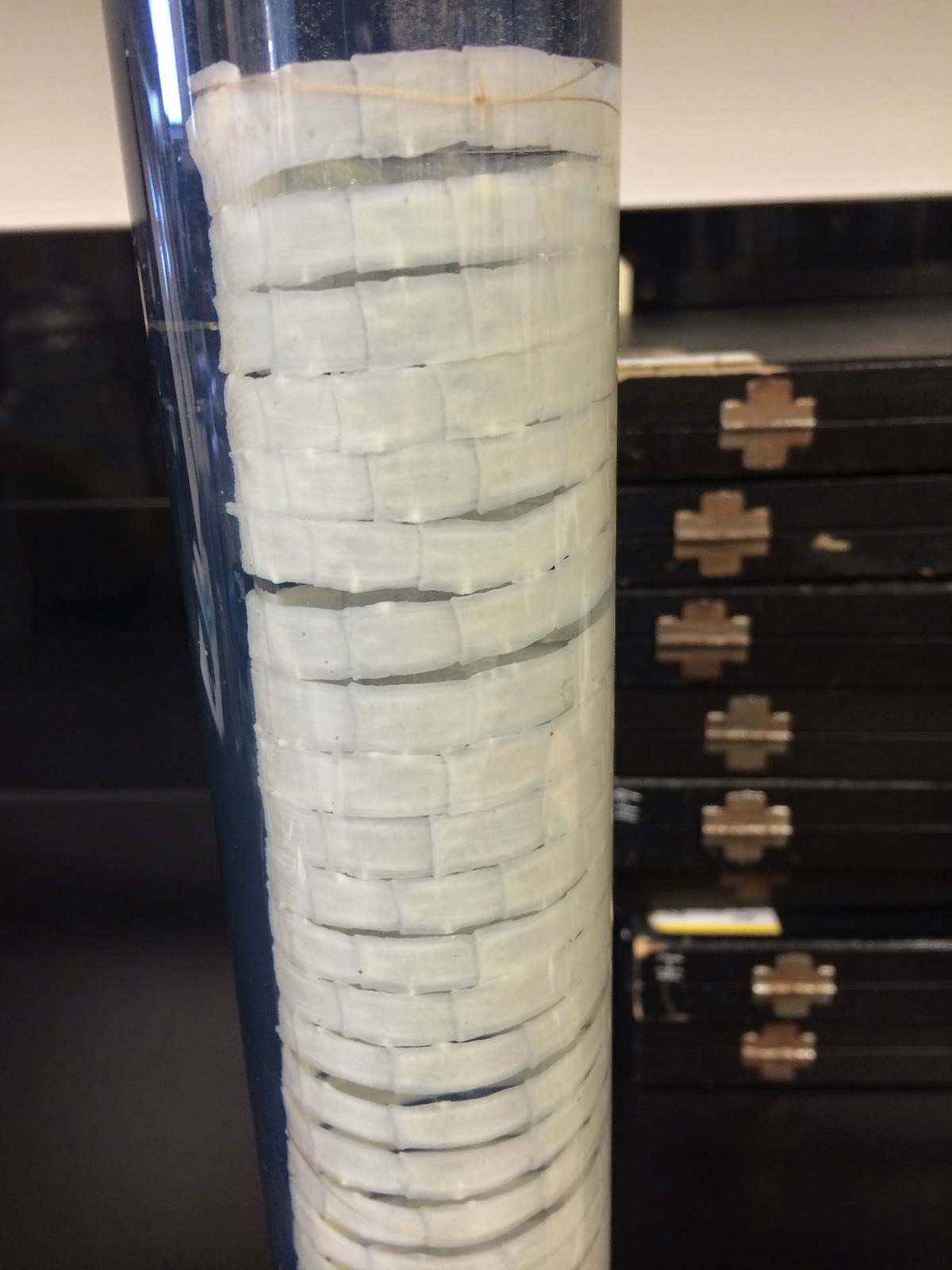 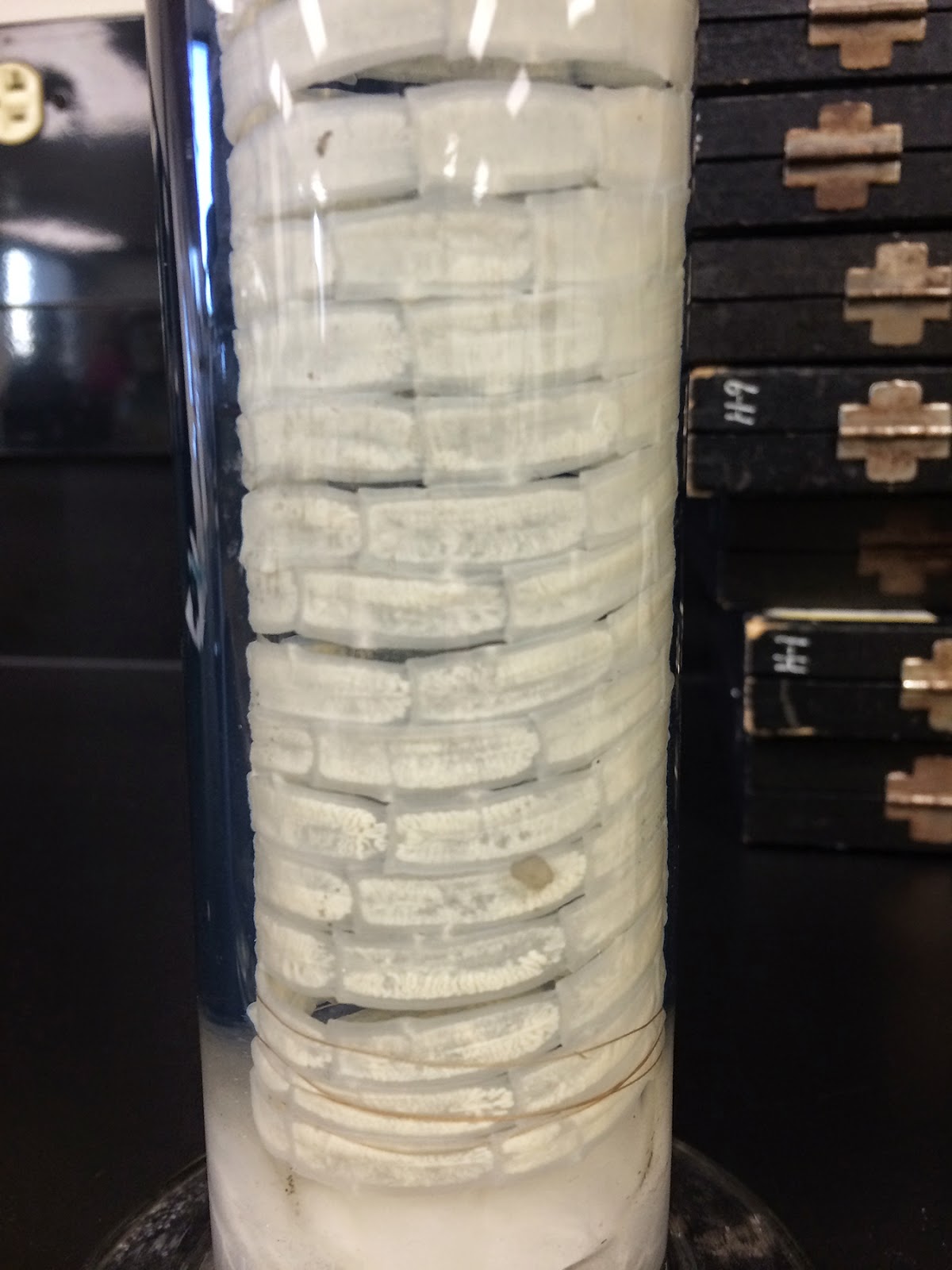 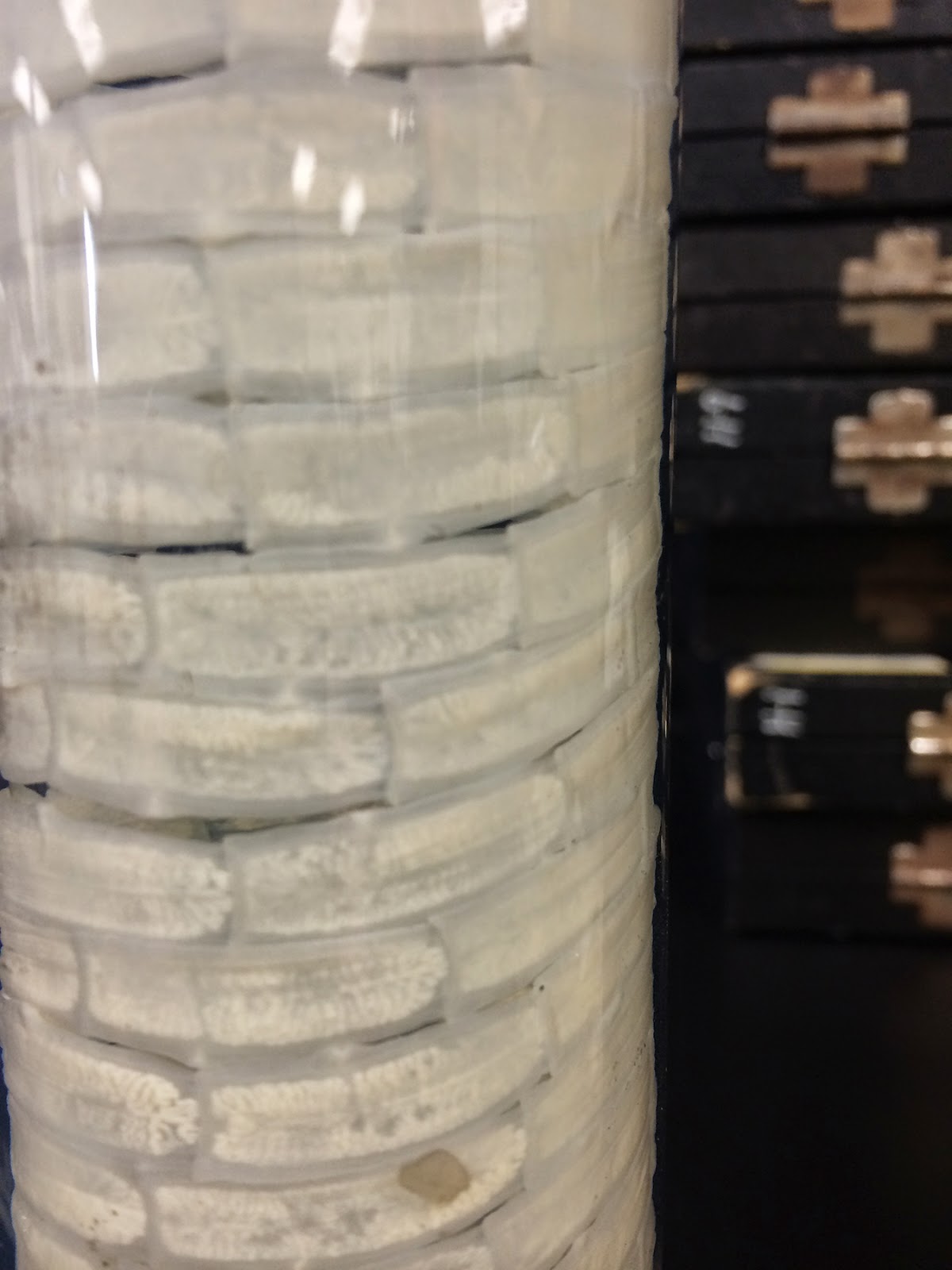 Identification?
Posted by ParasiteGal at 11:58 AM 12 comments:

Answer:  Taenia saginata: intact long segment of attached proglottids wrapped around a glass rod and carefully preserved inside of a cylindrical tube at Tulane University.

If you haven't already, please read the very poignant story that Florida Fan tells about his own experience with tapeworm infection.  It is in the comments from this case (question section).
Posted by ParasiteGal at 5:38 PM No comments:

The following large structures were seen on a stool wet mount preparation, measuring from 50 to 80 micrometers in largest dimension. The patient has a history of chronic intermittent diarrhea that is occasionally bloody and abdominal pain.  Identification? 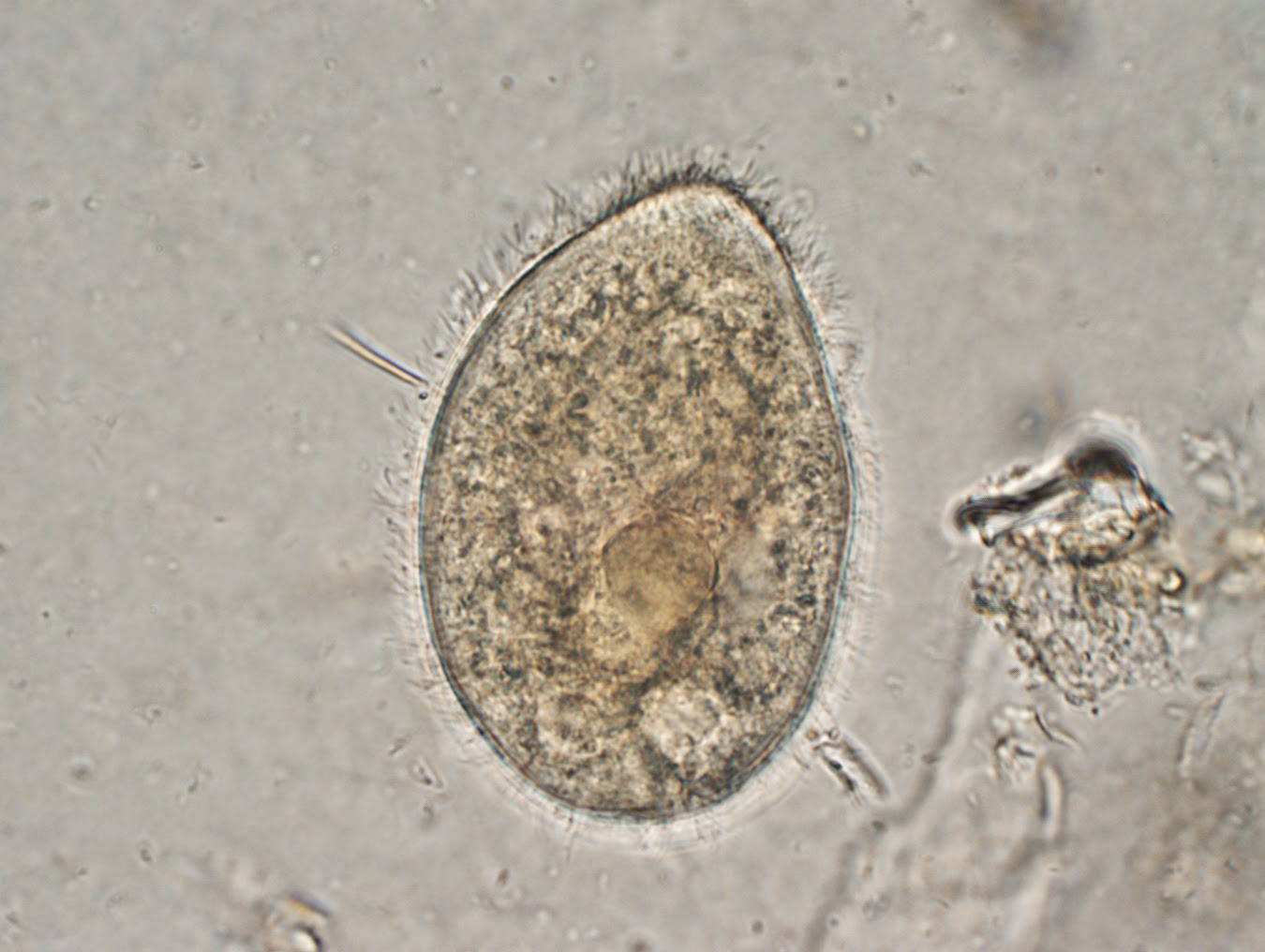 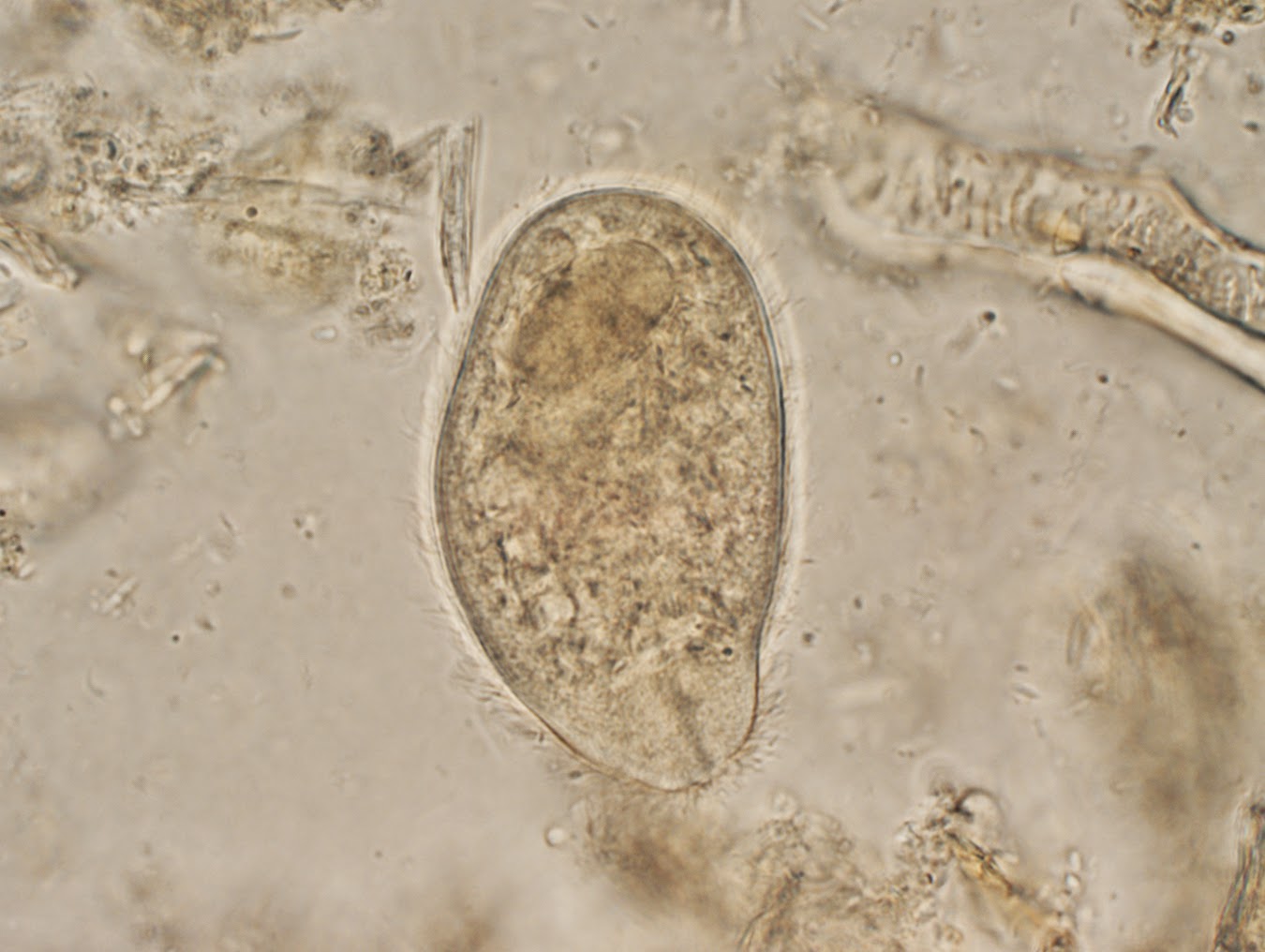 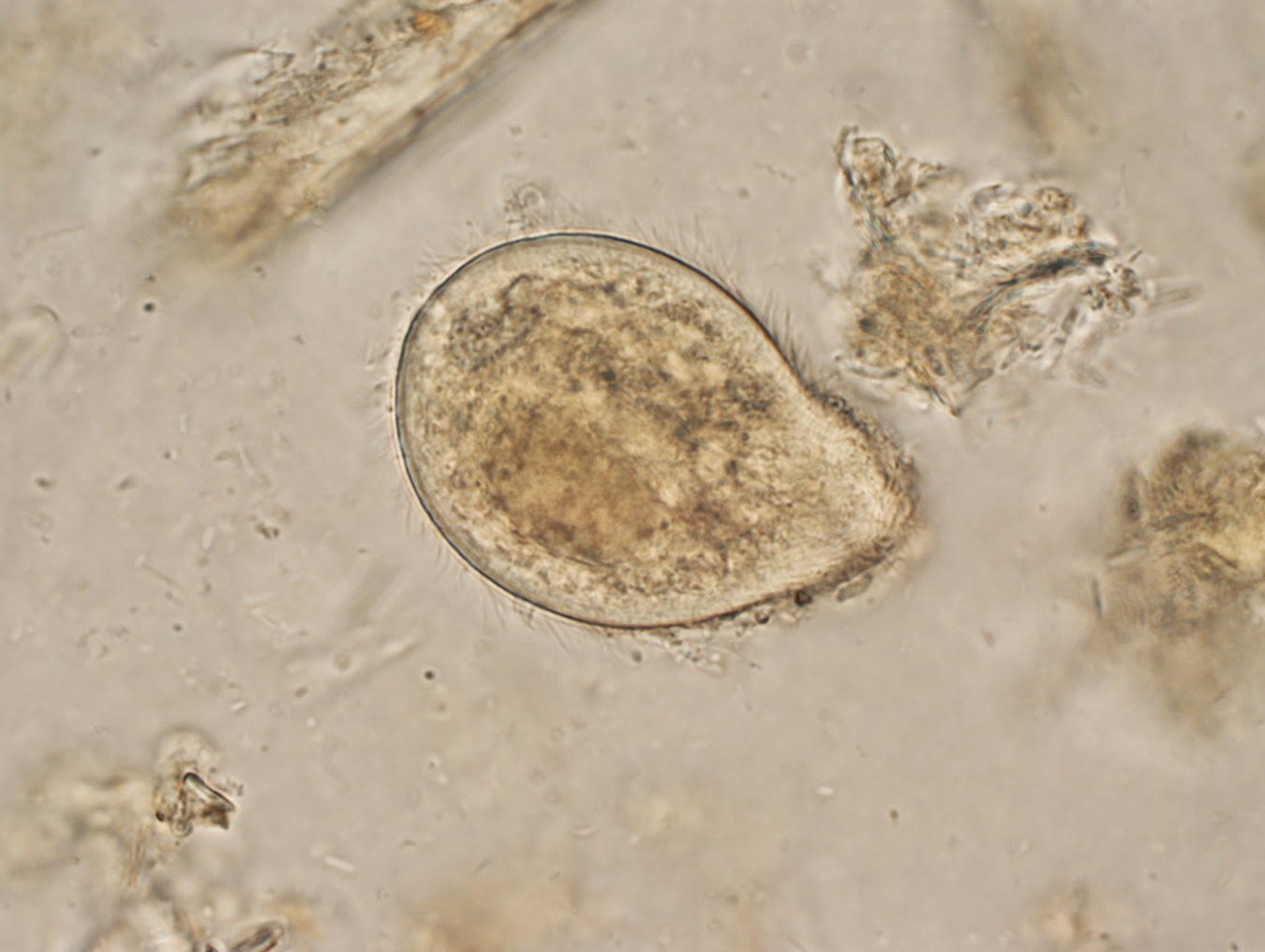 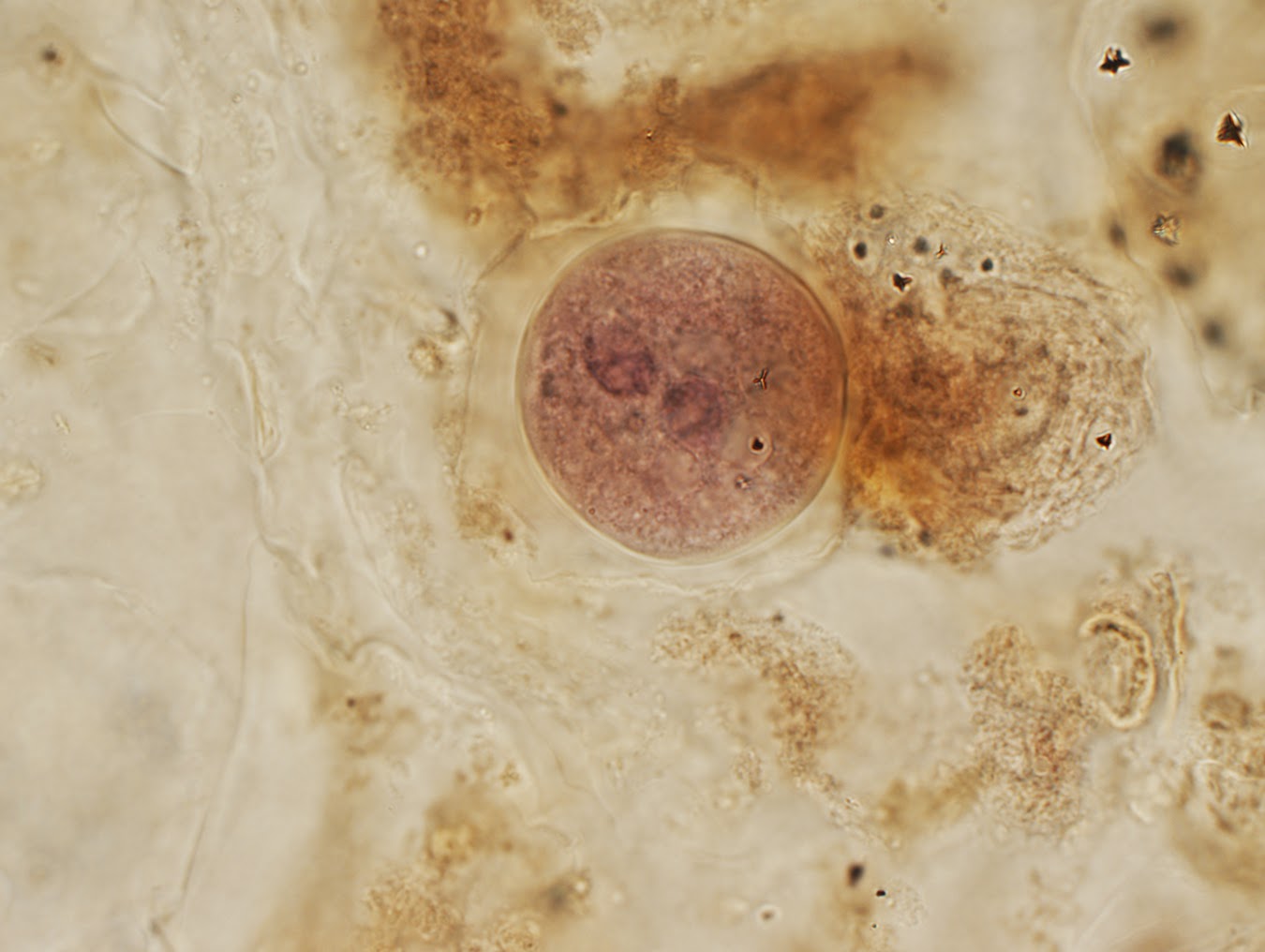 Posted by ParasiteGal at 8:15 PM 9 comments: 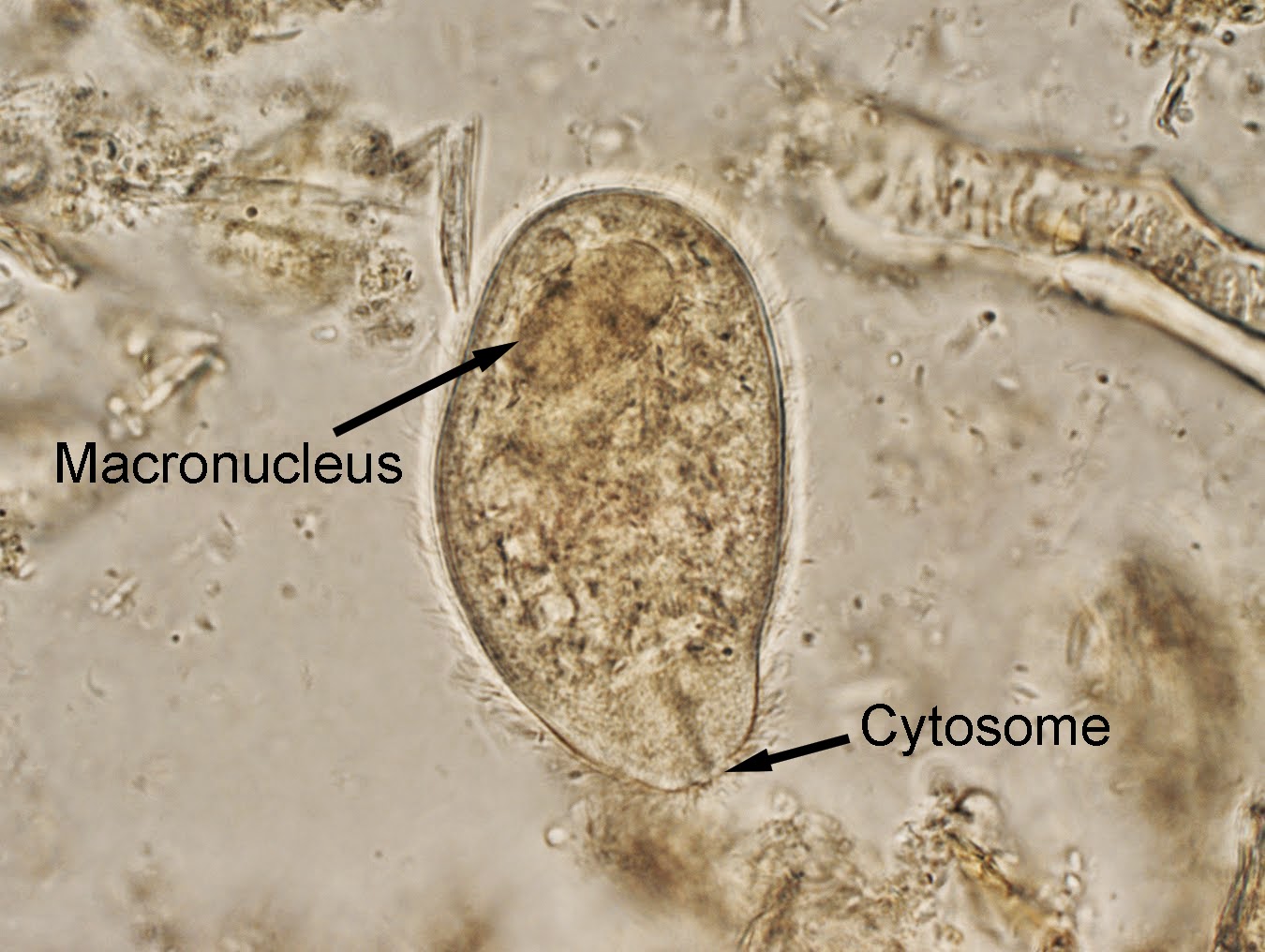 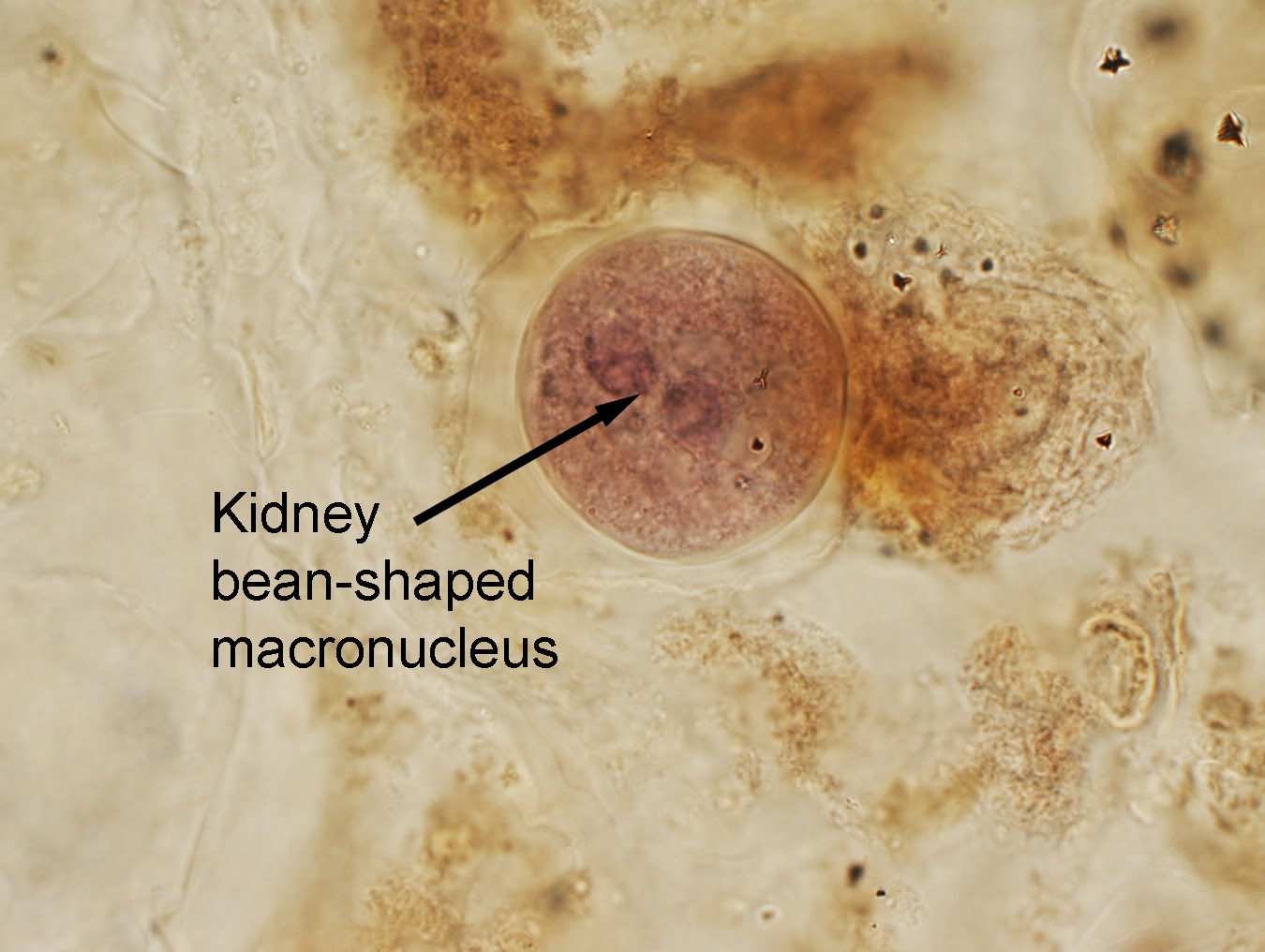 As noted by Anon, the classic motility of the ciliated parasite is described as "boring" - not "uninteresting" but "rotary"!

Thank you to everyone who wrote in with the answer.
Posted by ParasiteGal at 11:10 AM No comments: