The following small intestinal biopsy was taken from an elderly woman with cough, abdominal pain, and diarrhea. She reports no travel history outside of the United States, and has lived in the southeastern U.S. most of her life. Diagnosis? 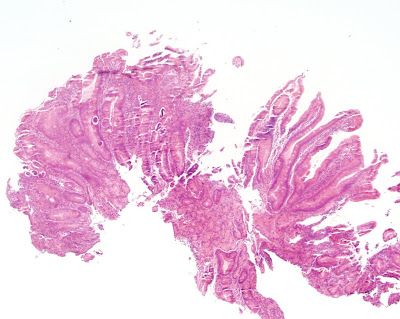 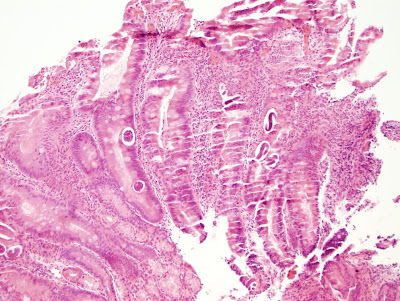 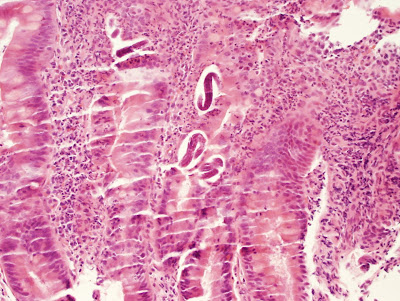 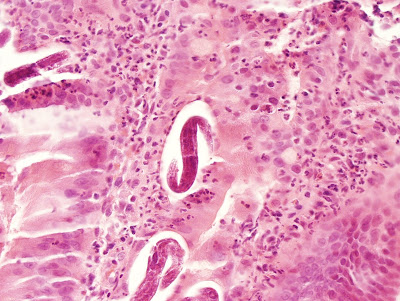 Answer: Strongyloides stercoralis larvae. This is a potentially serious infection, and can result in hyperinfection and death in immunocompromised hosts. It is endemic in regions of the world where human feces contaminates the soil, including some parts of the Southeastern United States where sanitation and waste treatment is inadquate.

Infection is acquired when infectious L3 larvae in soil penetrate intact human skin and enter the circulatory system to eventually reach the intestine.

Refer to the CDC DPDx web site for more information on the complicated life cycle of Strongyloides stercoralis.
Posted by ParasiteGal at 7:20 PM No comments:

I have a somewhat different case for all of your this week:

The following were seen on a Wright-Giemsa stained peripheral blood thin film from a 30 year old renal-transplant recipient with recurrent fevers. No travel history is available. (CLICK ON IMAGES TO ENLARGE) 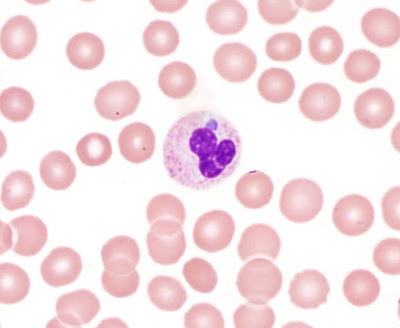 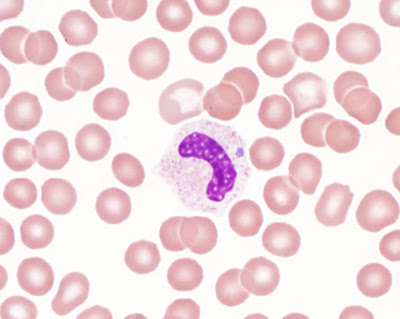 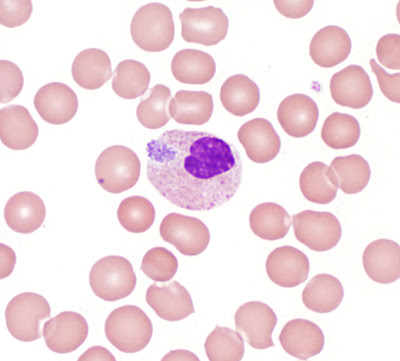 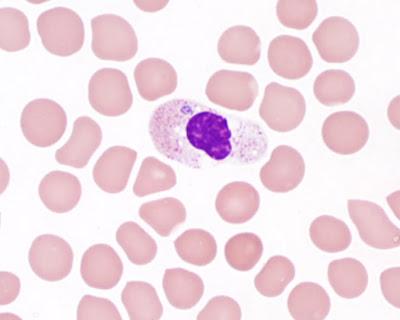 Answer: Morulae (bacterial clusters) of Anaplasma phagocytophilum within neutrophils. As noted by Anonymous, the morulae of E. ewingii are also found within neutrophils and can look identical to Anaplasma morulae; thus the diagnosis should be confirmed by another method. In this case, real-time PCR confirmed the diagnosis of Anaplasma phagocytophilum. Serology can also be used, although there is cross-reactivity between Ehrlichia and Anaplasma and the titers for antibodies to both organisms should be examined to see which is higher (thus indicating the more likely cause of infection).

I decided to show this case, even though it isn't a parasite, since intra-leukocytic morulae can be seen on the same peripheral blood films that are made to look for malaria parasites, trypanosomes, and microfilariae. It is also possible to see (rarely) Borrelia spirochetes of relapsing fever. Therefore, it's important to look at all of the cells (and between them!) when examining a peripheral blood film - you never know what you'll find.

A word of caution - not all blood film preparations are suitable for visualizing morulae inside of leukocytes.The Giemsa-stained preparations in my laboratory have been optimized for detection of intra-erythrocytic parasites; they do not demonstrate leukocytes well. The morulae of this case were actually seen by my hematology colleagues on their Wright-Giemsa stained films. I examined blood from the same patient (same collection) by our Giemsa method and was unable to find any morulae.
Posted by ParasiteGal at 10:02 AM No comments:

The following was seen on a drop of unstained peripheral blood from a patient who traveled to Cameroon and Spain.

Here are some of these objects on Giemsa-stained concentrated blood (CLICK ON IMAGES TO ENLARGE). They measure approximately 240 - 300 micrometers in length. 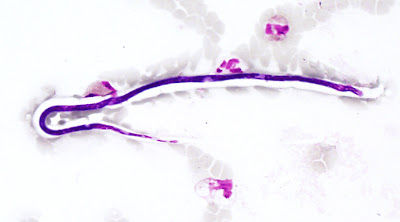 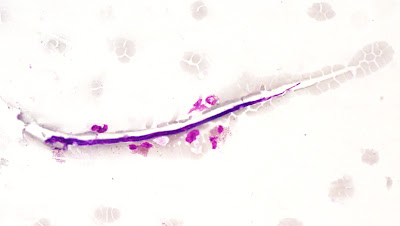 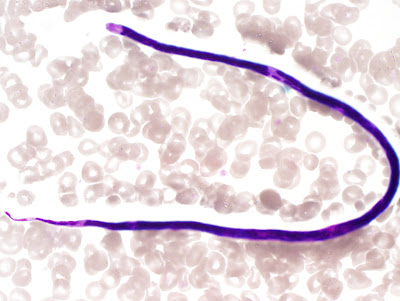 Identification?
Posted by ParasiteGal at 8:43 AM 6 comments:

The key features used to identify this case were:
1. Presence of a sheath (unstained, see below)
2. Internal nuclei that extend to the tip of the tail
3. Size in expected range for Loa loa.

In the image below, an empty-appearing space around the entire worm, as well as at the end of the tail (arrows) represents the unstained sheath.

As L. R. mentioned, "This would have been picked up in Cameroon not Spain I imagine as Loa Loa is the tropical African eye worm, contracted from a bite by the vector Chrysops spp. (mango or deer flies)."

Just a note: Most of the symptoms due to this worm are due to the migration of the adult, which brings it throughout the body, and sometimes across the bridge of the nose or surface of the eye (hence the name 'eye worm'). Although this can be very distressing to the patient (!), it does not typically harm the eye or cause any permanent change to the patient's vision. Loa loa should NOT be confused with Onchocerca volvulus which causes "African River Blindness." In the case of O. volvulus infection, ocular scarring and loss of vision is due to migration of the microfilariae (not the adults) through the eye, resulting in inflammation.

Loa loa also does not cause elephantiasis.

Thanks to everyone for writing in!
Posted by ParasiteGal at 9:58 AM No comments:

The patient is a 40 year old professor who had recently taken a trip to Brazil with 15 of his students. During his trip, he and his students took oral malaria prophylaxis, used an insecticide treated bednet while sleeping, and applied DEET to exposed skin during the day. However, one of the 15 students came down with "malaria" in March. The professor then presented with night sweats (but no fever) and the astute physician ordered a peripheral blood exam for parasites. The following are representative images from the blood films: 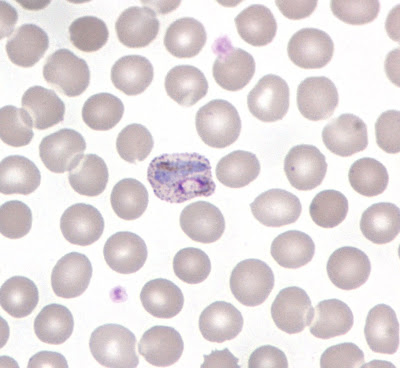 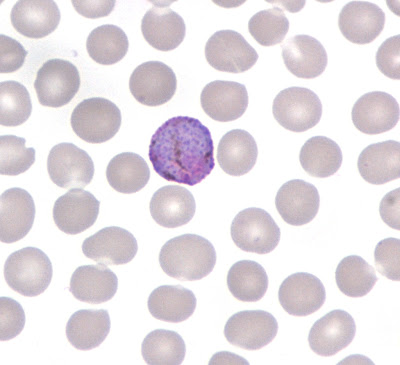 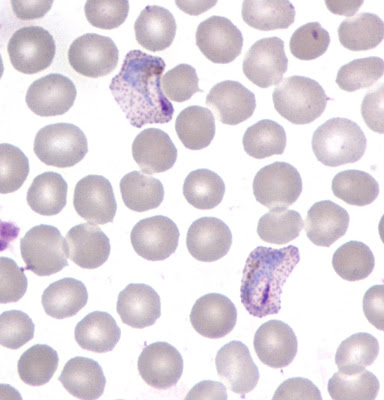 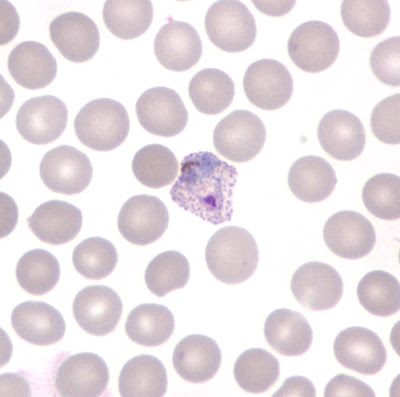 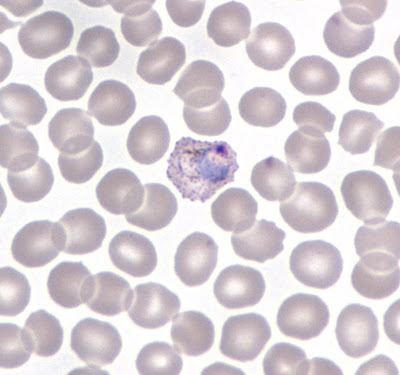 Everyone who wrote in recognized these parasites correctly. As mentioned by Kanoot, there are multiple amoeboid trophozoites of P. vivax shown and a single gametocyte in image #2. Neuro_Nurse correctly mentions that failure to comply fully with malaria prophylaxis is one of the most common reasons for malaria in travelers. Although we don't know for sure, it is likely that this patient did not strictly adhere to the prescribed regimen.

After recognizing that a malaria parasite is present, it is then important to speciate the organisms and provide an estimation of percent parasitemia.
I use the following approach to determine the infecting species:

First, I look at the size of the infected red blood cell, in comparison to the uninfected neighboring cells. If the infected cells are consistently enlarged, then I narrow my identification down to either P. vivax or P. ovale. The presence of stippling (a.k.a. Schuffner's dots) as seen here helps to confirm this differential. I then look for characteristic features of the 2 species, such as amoeboid forms of P. vivax or a predominance of ovale-shaped infected red blood cells with fimbriated (jagged) edges that are associated with P. ovale infection. In this case, the enlarged amoeboid forms that fill most of the cytoplasm, and the irregular shaped infected red blood cells that seem to hug the contours of the neighboring cells allow for the diagnosis of P. vivax infection.

Back to our Patient:
Neuro_Nurse correctly states that the treating clinician should consider radical treatment with primaquine after ruling out G6PD deficiency in this patient. Primaquine is typically given in combination with other antimalarial treatment, since it has the most effect on the hypnozoite stages that remain dormant in the liver. This will prevent subsequent relapse due to activation of the hypnozoite forms. It is important to check for the inherited condition, G6PD (glucose-6-phosphate dehydrogenase) deficiency, before giving the patient primaquine, since it can lead to a serious, and even fatal, hemolytic anemia.
Posted by ParasiteGal at 1:02 PM No comments: