According to the World Health Organization (WHO) :

World Malaria Day is a day for recognizing the global effort to provide effective control of malaria. It is an opportunity:
- for countries in the affected regions to learn from each other's experiences and support each other's efforts;
- for new donors to join a global partnership against malaria;
- for research and academic institutions to flag their scientific advances to both experts and general public; and
- for international partners, companies and foundations to showcase their efforts and reflect on how to scale up what has worked. 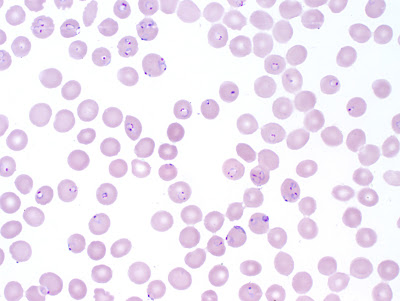 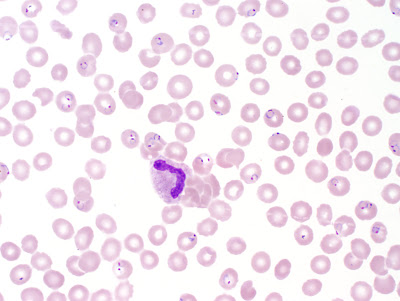 Identification?
Posted by ParasiteGal at 11:21 AM 7 comments:

Also important in the diagnosis is the fact that the infected red blood cells (RBCs) are not enlarged in comparison to the neighboring uninfected cells and that no stippling is present. I've highlighted the important diagnostic features of P. falcipaum in the image below: 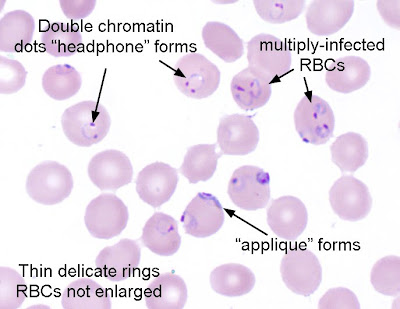 To answer LR's question on how to approach Plasmodium speciation:

The size of the infected cells and presence/absence of stippling are the first 2 things I tend to use to formulate my diagnosis. Enlarged RBCs (+/- stippling) supports the diagnosis of P. ovale/P. vivax. Normal sized or small RBCs with no stippling (possible clefts/dots) supports the diagnosis of P. falciparum/P. malariae/P. knowlesi. I then look at other features, such as size/shape of trophozoites, classic forms (e.g. "band" form of P. malariae or "head phone" form of P. falciparum), number of merozoites in schizonts, and presence of later stage forms (typically not seen in P. falciparum infection). The "classic forms" are characteristic but not definitive for the various species, and storage/transport conditions and anti-malarial treatment may cause variations in morphology; therefore, the diagnosis must be made taking the entire morphologic picture into consideration. Rapid antigen tests and PCR may be helpful with difficult cases.

Thanks to everyone who wrote in with comments on this case!
Posted by ParasiteGal at 8:41 AM No comments:

The following worm was found in a frozen cod fillet from the local chain grocery store. When first received, it had a red-brown color and was in a tight coil. It measures approximately 3cm in length.(CLICK ON IMAGES TO ENLARGE) 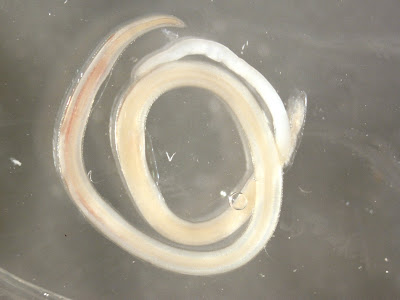 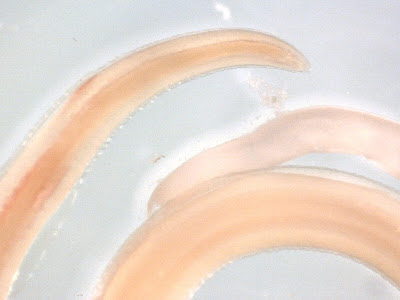 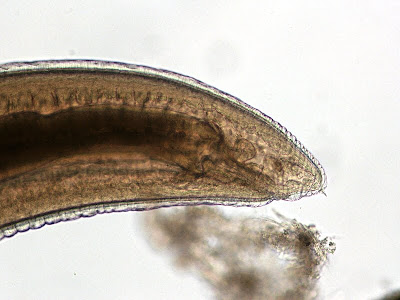 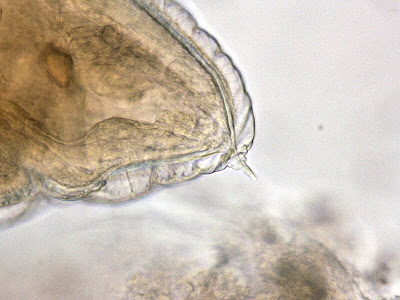 If ingested, would this worm cause infection?
Posted by ParasiteGal at 7:38 AM 12 comments:

Thanks to everyone who wrote in with the answer to this case. You all recognized this as one of the anasakid nematode (roundworm) larvae.

Anisakiasis is a zoonotic disease, with marine mammals (e.g. dolphins, seals) serving as the definitive hosts. Humans become accidental hosts after ingesting raw or undercooked seafood containing anisakid larvae. The larvae can't complete their life cycle in humans, but may attempt to embed in human gastric or intestinal mucosa, resulting in intense pain, and rarely, perforation. A chronic granulomatous response can also develop, mimicking inflammatory bowel disease. Alternatively, larvae may be "coughed up" or passed symptomatically in stool.

Luke Roberts reminds us that some individuals may experience gastroallergic reaction to anisakid antigens (in either alive or dead worms), resulting in urticaria (hives), erythema (redness), angioedema (swelling beneath the skin), bronchospasm (constriction of the airways), and even anaphylaxis (severe whole body reaction).

Diagnosis can be made by identification of characteristic features of 2-cm anisakid larvae, including a posterior mucron or "spine" (when present) and 3 poorly formed anterior lips with a small boring tooth. Speciation is performed by examining the size, presence, and position of the intestinal cecum. B.A.M. comments that "A genus-level ID is not possible from these images, but there appears to be a hint of an anteriorly-directed intestinal cecum, which would support Pseudoterranova." 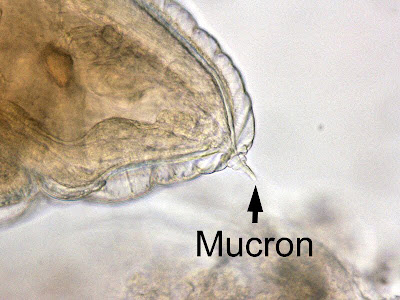 Anisakiasis is most common in places where people eat undercooked/uncooked saltwater fish or squid. Commonly infected fish include cod (Atlantic or Pacific), Pacific halibut, mackerel, salmon, and red snapper. Some studies have reported over 90% of examined fish to be infected. Fresh water fish may also be infected. The United States FDA and fishmongers/grocers try to mitigate the risk of anisakiasis by removing the worms prior to consumption. However, it's still easy to find these larvae. I can typically find at least 1 in a bag of 7 frozen cod fillets!

Fortunately, freezing kills the worm, and greatly decreases the risk of acute disease. However, as anonymous states "Freezing should render non-infectious, but I'll pass just the same."

According to the CDC, "adequately cooking fish (60° C) or freezing (-20° C for seven days or -35° C for 15 hours) before ingestion will kill anisakid helminths" and thus eliminate the risk for acute anisakisis.
Posted by ParasiteGal at 11:44 AM No comments:

A colon biopsy from a patient with dysentery is received. On endoscopy, multiple ulcers in the rectum are noticed. Diagnosis? 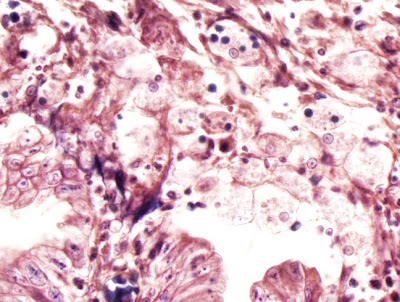 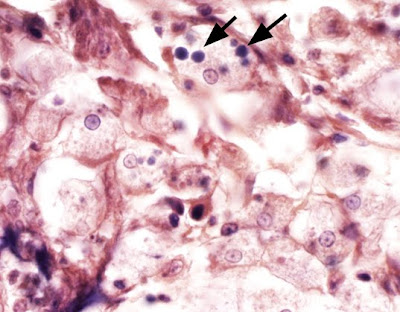 Answer: Amoebiasis, due to Entamoeba histolytica

The diagnosis can be made by identification of classic Entamoeba trophozoites with a "ring and dot" nucleus (see image) containing engulfed red blood cells (top 2 arrows). 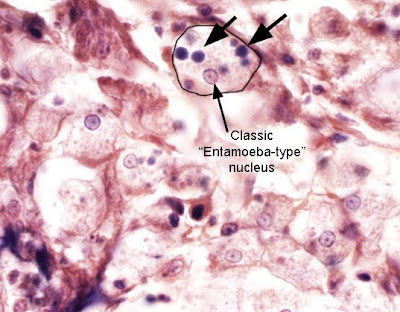 This protozoan parasite only rarely invades the intestinal wall and causes symptomatic infection. Infection is most commonly asymptomatic. This organism is morphologically identical to the closely related human commensals E. dispar and E. moshkovskii, which may also be found in the human intestinal tract. Unless invasive disease or trophozoites containing ingested red blood cells are observed in biopsy or stool preparations, these amebae cannot be differentiated morphologically.
Posted by ParasiteGal at 7:26 AM No comments:

Welcome Mayo Clinic Medical Students to the Parasitology Case of the Week. Please look at the case below and answer the question using Blackboard.

The following worm was retrieved during a screening colonoscopy near the ileocecal valve: (CLICK ON IMAGES TO ENLARGE) 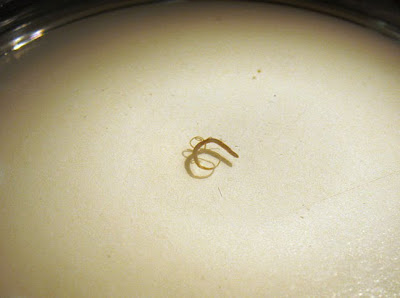 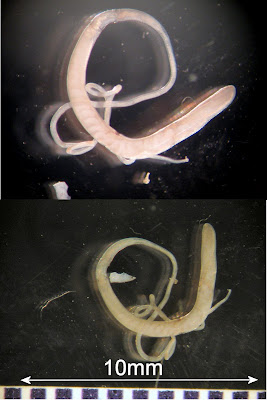 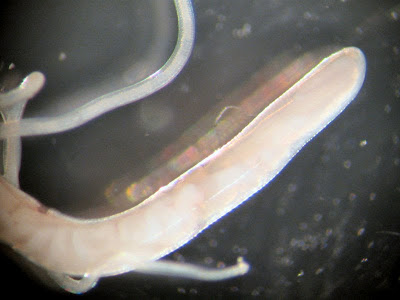 By gently 'prodding' the worm with an applicator stick, the following eggs were expressed: 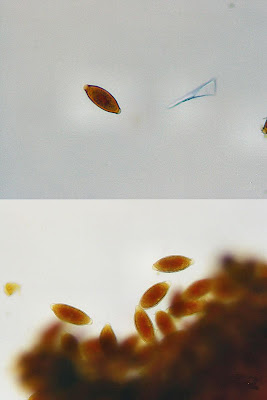 QUESTION: (Mayo Medical Students - Please answer on Blackboard)
Which of the following are true regarding this parasite?
1. It is an intestinal trematode (fluke)
2. Symptoms of infection tend to increase with worm burden
3. Ongoing autoinfection results in long lasting infection (decades)
4. Infection is acquired following ingestion of undercooked meat
5. Eggs are infectious within hours of being laid


Many thanks to Bill Pasculle who donated this interesting case and beautiful photographs!
Posted by ParasiteGal at 12:46 PM