The following were seen in a fresh stool specimen from a patient with chronic watery diarrhea.

The video can also be seen here:
http://youtu.be/gD0FtgV8KeY

100%
Many many thanks to Dr. Tom Grys and his parasitology staff who donated this video!
Posted by ParasiteGal at 7:43 PM 14 comments:

This video shows the characteristic "falling leaf" motility of Giardia.  I really like how you can see the shape of the trophozoite in this video.  Note in the still shots below that is somewhat flattened laterally and therefore looks like a leaf.  It helps explain the pattern of motility that we see. 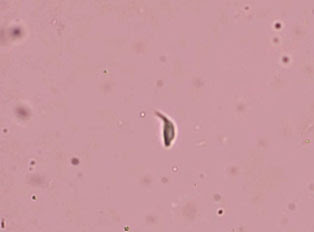 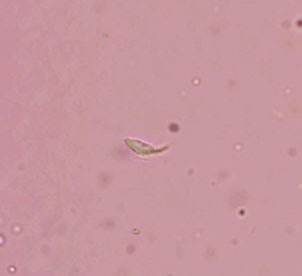 It is only when the troph turns to show its ventral-dorsal aspect that we see the classic piriform (pear) or 'kite' shape of the trophozoite: 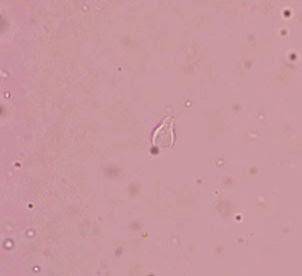 And now our poem from Blaine Mathison!

Giardiasis has often been referred to as Beaver Fever
Not to be confused with the phenomenon about a certain singer
And this parasite has much better dancing moves
as it winds through your lumen to a flagellar groove
And with no annoying ‘pooparazzi’ life couldn’t be sweeter!

(For those of you who aren't up on the latest pop culture [like me], Blaine is referring to Justin Bieber and the bewildering phenomenon of Bieber Fever - yes folks, that really is a thing)

Posted by ParasiteGal at 8:52 AM 3 comments:

The following were seen in an unstained sputum specimen from a patient with peripheral eosinophilia, cough, and worsening pulmonary infiltrates.  She had been receiving chemotherapy for ovarian cancer.  Right before this specimen was obtained, she had been admitted to the ICU for respiratory failure. (CLICK ON IMAGES TO ENLARGE) 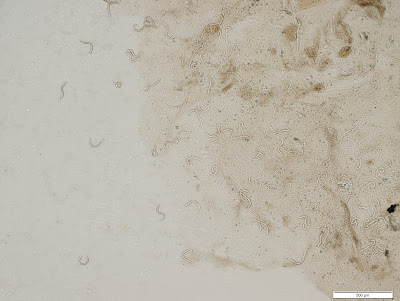 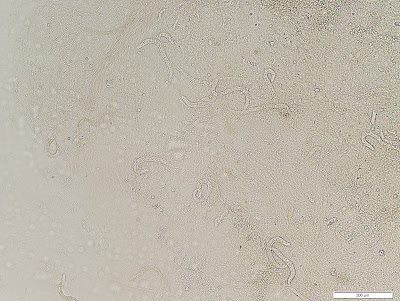 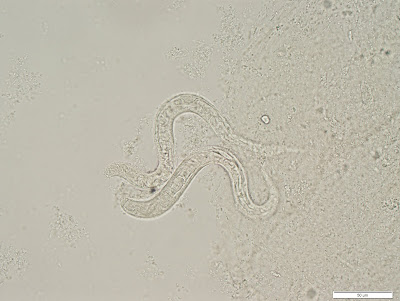 Posted by ParasiteGal at 4:59 PM 7 comments:

Shown is a very heavy infection of Strongyloides stercoralis, with numerous larvae seen in this sputum specimen.  When we identify Strongyloides in my lab from any specimen outside of the GI tract, we consider it a critical result and report it to the physician immediately.  Unfortunately, this case was fatal, despite prompt treatment.

As Lukus points out, "Disseminated strongyloidiasis, can occur in patients immunosuppressed by chemotherapy or AIDS; Ivermectin is treatment of choice."

Of note, a low level of autoinfection occurs naturally in immunocompetent hosts, during which filariform larvae enter the circulation and travel to the lungs. They then break out into the airways, migrate up the bronchi and trachea, and then are swallowed, to reach the small intestine where they mature into adults.  This is how infection can persist for decades.  Unfortunately, an immunocompromised state can accelerate this process, resulting in large numbers of larvae entering the circulating and traveling to the lung and elsewhere in the body.  Death is often due to sepsis (due to bowel flora carried by the larvae into the blood and CSF) and respiratory failure.
Posted by ParasiteGal at 7:26 PM 2 comments:

I have another very 'pretty' case for you this week.  The following protozoa were seen in a trichrome stained stool smear from a pig farmer, originally from China.  The cysts measure approximately 11-15 micrometers in diameter, while the trophozoites measure 15-20 micrometers in greatest dimention.  Identification? 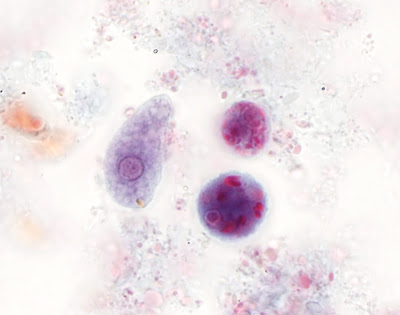 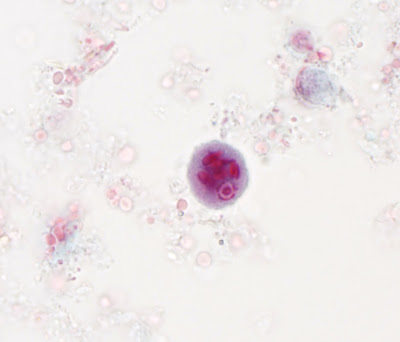 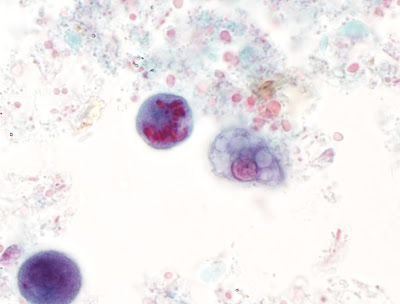 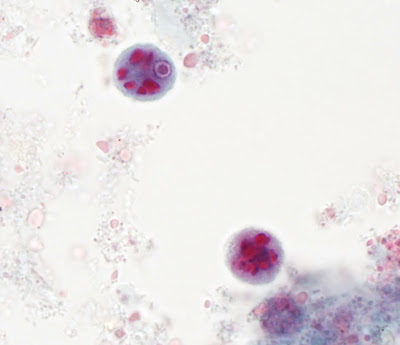 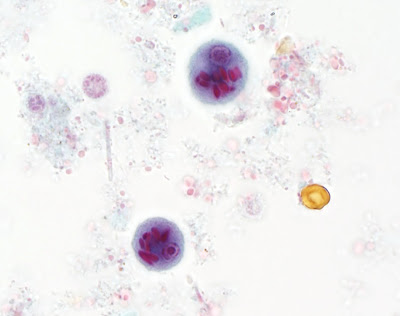 As mentioned by several of my viewers, this organism is characterized by its abundance of chromatoid bodies in the cyst form, moderate size, Entamoeba-type nucleus with peripheral rim of chromatin and eccentric karyosome (the latter can be large and diffuse as in this case), and single nucleus in the cyst form.  Some of you mentioned that the chromatoid bodies resembled RBCs; however, they are more numerous than would be expected for RBCs, and more elongate and irregular in size.

Here are some of the characteristic features of the cyst forms: 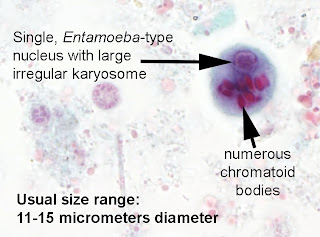 Thank you for writing in!
Posted by ParasiteGal at 9:10 AM No comments:

Happy Independence Day to all of the Americans following this blog.

As a special post, I'd like to share some excellent Entamoeba histolytica movies taken by Sinclair Stammers in the lab of my mentor, Dr. Graham Clark, at the London School of Hygiene and Tropical Medicine.  Dr. Clark and Dr. Diamond wrote the definitive papers proving that E. histolytica and E. dispar are separate organisms by molecular analysis.

HERE is the link to the movies.  Search for "Entamoeba histolytica" and click the Motion button - that will bring you right to the movies.  Note the classic directional motility of the trophozoites.  They will crawl right off your slide is you let them.  The time lapse movies are fascinating.

Dr. Clark runs the Entamoeba Homepage which some of you may find of interest.  You can access it HERE.