The following were seen microscopically (4x objective) on a non-nutrient agar plate containing stool. The patient was from Cambodia and presented with abdominal pain and eosinophilia.

Here is a macroscopic image of the agar plate with the stool specimen. 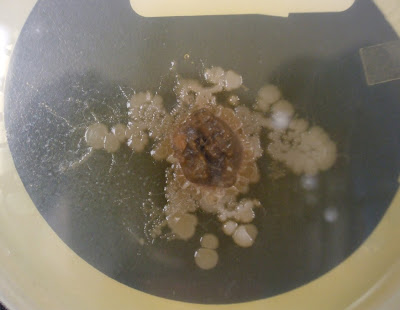 Diagnosis?
Posted by ParasiteGal at 9:01 AM 6 comments:

Answer: Probable infection with Strongyloides stercoralis. Other larvae, such as those of hookworm species, can have a similar appearance on agar culture, and thus it is important to correlate the laboratory findings with the clinical presentation. In this case, the patient had a long standing eosinophilia, consistent with ongoing autoinfection with S. stercoralis. Microscopic examination of the larvae can also confirm the identification. MicrobeMan gave a great description in his comment to this post: "The nutrient agar plate very nicely demonstrates the production of furrows left in the wake of the migrating larvae, which emanate away from the central "dollop" of feces. The bacteria are dragged along by the migrating worms and grow in the furrows, which acts as an indicator for larval migration. As a side note, this particular scenario can play out in vivo, as well. In the host, gut flora can be introduced outside of the intestinal lumen by larvae that have penetrated the intestine." The last point above is very important; bacteria introduced into the blood stream by migrating larvae can cause bacterial sepsis and contribute to the morbidity and mortality of strongyloidiasis.
Posted by ParasiteGal at 7:59 AM No comments:

A 50 year old male from South America died suddenly and an autopsy was performed. show are hematoxylin and eosin stained tissue sections of myocardium (heart muscle). Diagnosis?
(CLICK ON IMAGES TO ENLARGE) 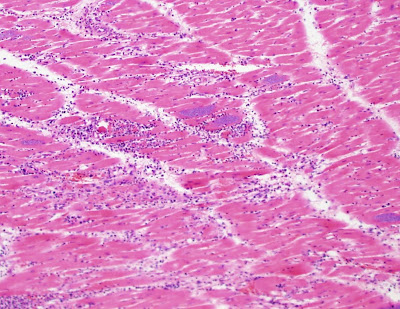 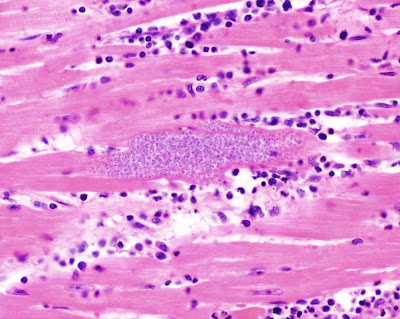 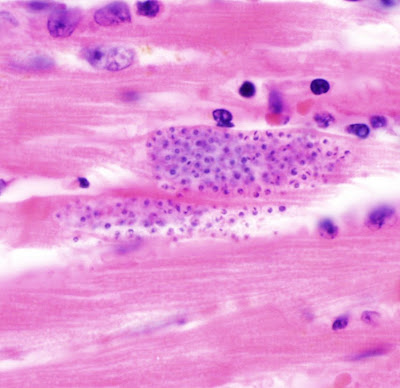 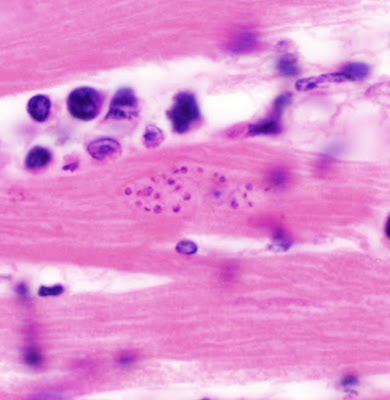 congratulations to Josh, Alasdair, BW, and Anonymous who wrote in with the correct answer!

The diagnostic features of this case are:
1. Location in cardiac muscle
2. formation of "pseudo-cysts" 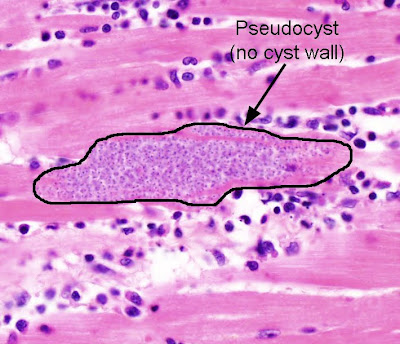 3. Amastigotes (non-motile forms) within pseudocysts, containing both a nucleus and rod-shaped kinetoplast 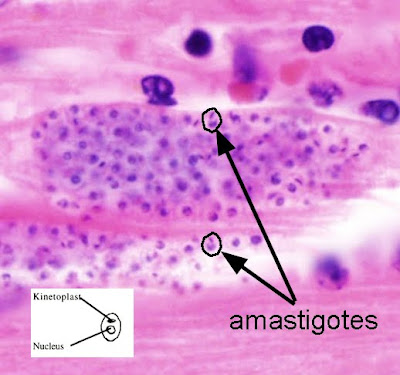 Posted by ParasiteGal at 8:49 AM No comments:

The following was identified in "perirectal abscess fluid."
It measures approximately 55 microns in length. Identification?
Photo courtesy of Heather A. 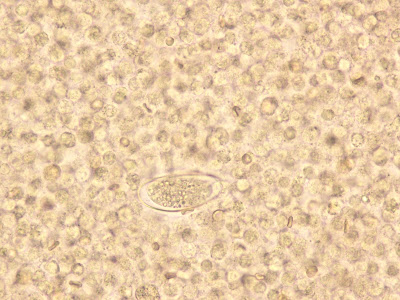 Answer: Enterobius vermicularis ovum (egg) surrounded by inflammatory cells. Thank you for all of the comments on this case!

All of you realized that this is a pinworm egg, due to the presence of characteristic features, including medium size (50-60 microns in length) and flattening on one side. The flattened side gives the egg somewhat of a "D" shape as is shown below. The eggs are fully infectious within 4-6 hours after being laid, without the need for a soil incubation phase. Therefore, infection passes easily from person to person. 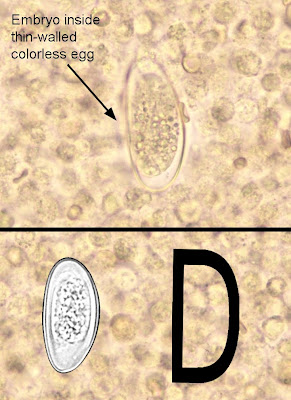 Pinworm eggs are typically deposited by the female on the perianal folds of the host; however, the worms and their eggs can occasionally get lodged in folds of intestinal mucosa, or other inopportune places in the intestine (eg. diverticula, appendix) and result in formation of an abscess (as seen here).
Posted by ParasiteGal at 10:39 AM No comments: