The following were seen on splenic aspirate. Diagnosis? 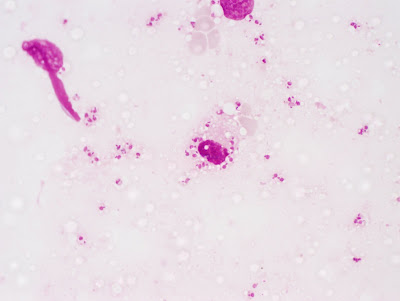 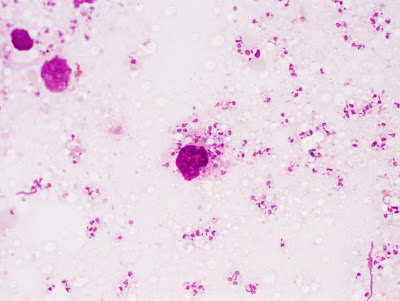 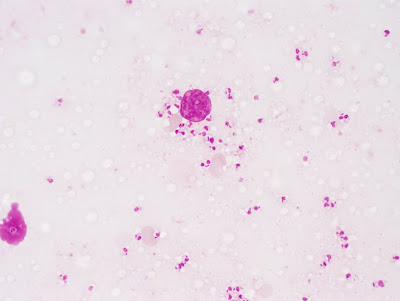 Posted by ParasiteGal at 9:51 PM 3 comments:

Answer: Leishmania spp. amastigotes. Note the small (2-5 micron) oval-shaped objects within and outside of macrophages, with a nucleus and classic rod-shaped kinetoplast. The large purple objects are macrophage nuclei. 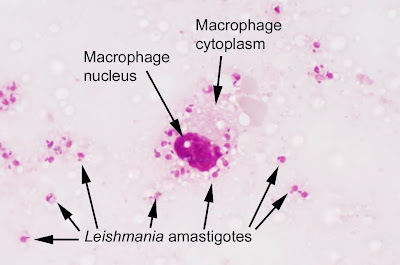 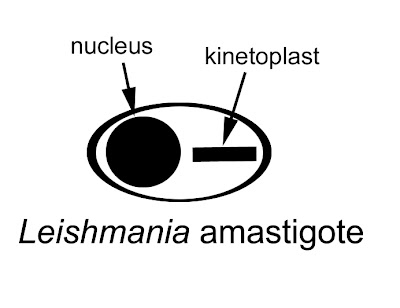 Visceral leishmaniasis is prevalent in some parts of India and Africa, the Mediterranean, and South America.
Posted by ParasiteGal at 8:57 PM No comments:

Here's a more straight-forward case than our recent ones: 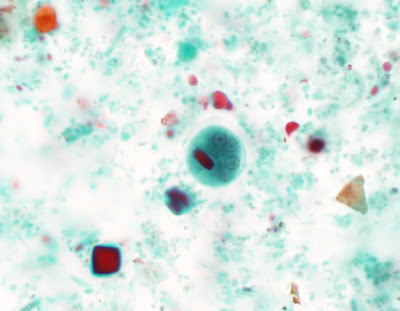 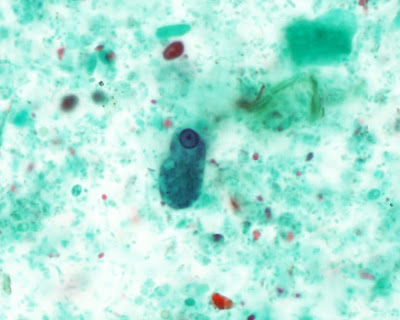 Identification?
Would the fact that the patient is asymptomatic make a difference in your diagnosis?
Posted by ParasiteGal at 11:22 AM 7 comments:

Answer: Entamoeba histolytica/dispar
Congratulations to all of the viewers who wrote in with the answer - you recognized that the morphologic features and size were consistent with these two closely related protozoa. E. histolytica is a recognized pathogen, although it only causes disease in approximately 10% of the people it infects. E. dispar, on the other hand, is generally considered a non-pathogen. Unfortunately, the two are morphologically indistinguishable, and require isoenzyme, antigen, or molecular methods to distinguish them. The only exception to this is when E. histolytica trophozoites are seen invading the bowel wall on histologic section, or contain ingested RBCs on ova and parasite exam. No ingested RBCs are seen in this case, so it is not possible to differentiate between the two organisms.

Finally, just to make life difficult for clinical parasitologists, there is now a THIRD species of Entamoeba which is morphologically indistinguishable from E. histolytica and E. dispar. Entamoeba moshkovskii is now recognized to be a wide spread environmental organism and occasional human parasite. Therefore, I suppose that the most correct answer to this case is "Entamoeba histolytica/dispar/moshkovskii!!
Posted by ParasiteGal at 9:39 AM 4 comments:

OK, usually I stick with human parasites, but I recently came upon some rodents with the most remarkable parasites! We were conducting a catch and release study of small rodents to determine what diseases they were carrying. In the particular area that we were trapping, a large percentage of mice had the following parasites:

One with a parasite in its chest region 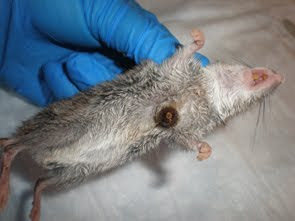 Here is a video showing how the parasite was slightly moving (although it's hard to make out since the mouse's heart is also beating):


Another mouse with double parasites in its posterior 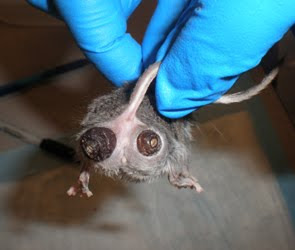 We were able to remove one of these for further examination. Here is the video of its removal:


Here is the object we removed: 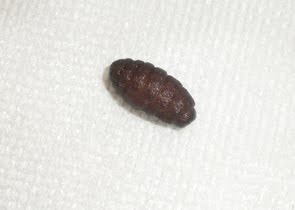 Finally, here is the mouse after we removed the parasite, showing the pocket that was left behind: 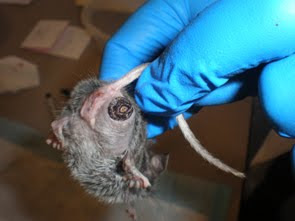 As Bill mentions in his comment, he tried to rear two of these larval flies to adults but they did not enter the pupation stage (the next step of development prior to the emergence of the adult). If we could have examined the adult fly, identification to the species level would have been more straight-forward. However, we can say that based on the features of the larvae, these are most likely Cuterebra spp.

In nature, these larva drop off the rodent host and pupate in the ground. They then emerge as adults.

Thank you for all of the comments on this interesting case.
Posted by ParasiteGal at 8:52 AM 1 comment: