I have a fascinating parasite for the dreaded Case of the Week 666 - not a bad way to end out 2021! I promise I will start us off in 2022 with something fun.

The following was seen on a Giemsa-based stain from a liver cyst. Identification? 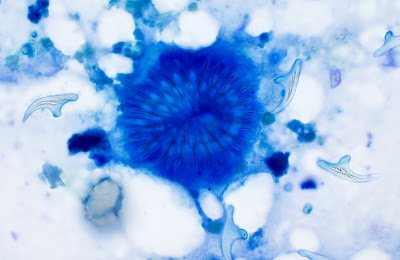 Posted by ParasiteGal at 5:17 PM 7 comments:

Answer to the Parasite Case of the Week 666: Echinococcus sp. degenerating protoscolex (immature scolex) and free hooklets. We can't say which species of Echinococcus is present from the image alone, but it is most likely to be E. granulosus, as this is the most common species to infect humans, and it commonly forms a liver cyst that is amenable to aspiration.

This is a beautiful example of rostellar hooklets in a protoscolex. 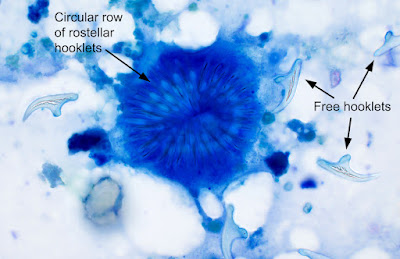 Here are some other great examples of Echinococcus sp. protoscoleces and hooklets in aspirate fluide from previous posts: 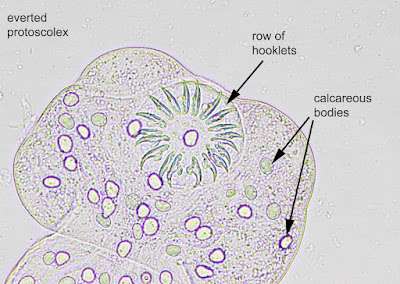 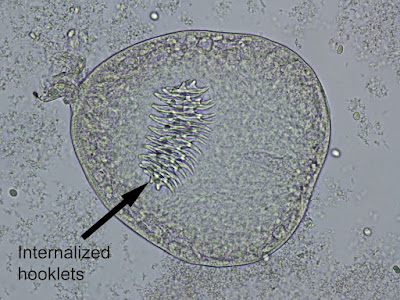 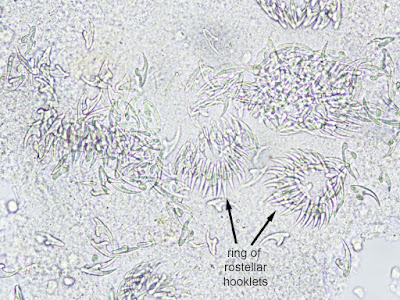 Posted by ParasiteGal at 1:39 PM No comments:

This week's case was made possible by BEI Resources and the NIH-NIAID Filariasis Research Reagent Resource (FR3) Center. They provided the materials and excellent instructions for this special experiment: 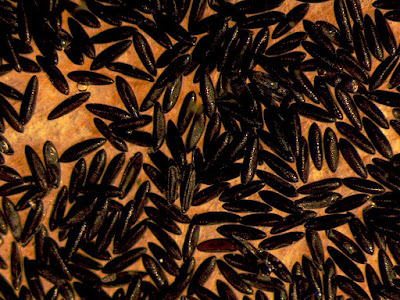 These black elliptical objects measure ~550-600 micrometers long, and came dried on a piece of paper towel. I added a strip of the paper towel to a Petri dish containing distilled water and waited about 30 minutes for the action to start. Here is what happened:

Here are some still shots of the action: 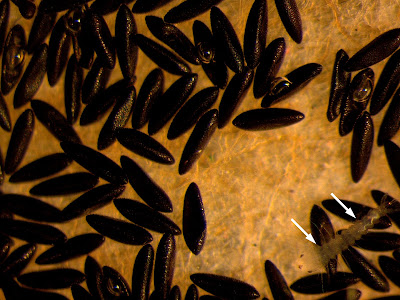 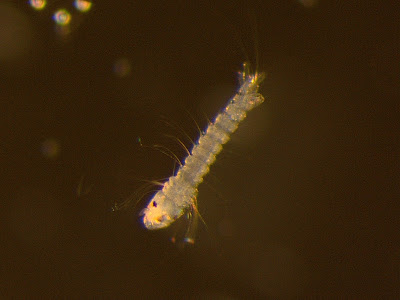 What are these objects??
Special thanks to Dr. Shelly Michalski and Teagan at the FR3 for providing the materials for this special experiment!

Posted by ParasiteGal at 9:26 AM 9 comments:

Answer to the Parasite Case of the Week 655: Culicidae mosquito eggs and larvae. The appearance of the eggs (darkly-colored, individual eggs, not in a raft, and without bilateral floats) is consistent with Aedes spp. Since I ordered these specifically from the FR3, I can say with certainty that these are eggs those of Aedes aegpti. I hope you all enjoyed the video of the wriggling L1 larvae!

Posted by ParasiteGal at 1:00 PM No comments:

Here's another fun case from my lab, courtesy of our awesome parasitology technical specialist, Heather Morris. The following objects were found on screening colonoscopy. 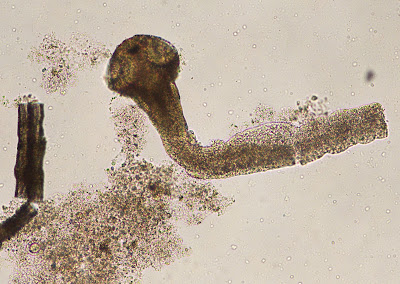 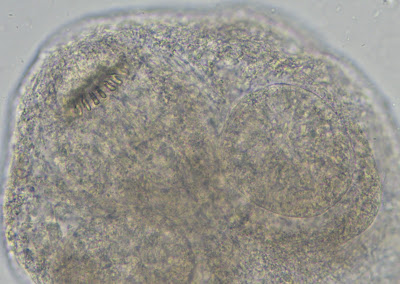 The following helpful object was found in the accompanying fluid: 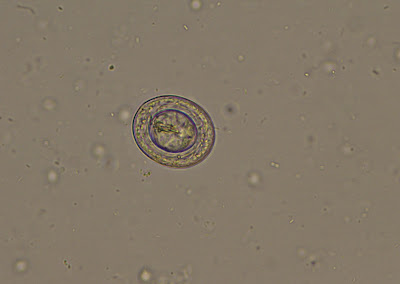 Answer to the Parasite Case of the Week 664: Hymenolepis (Rodentolepis) nana scolex and egg.

It is very unusual to see a scolex of H. nana; in my experience, it is usually only the proglottids that are removed when seen during colonoscopy. Therefore, it's a real treat to get to see the scolex in an actual clinical specimen!

Like Taenia solium and Dipylidium caninum, the scolex has an armed rostellum (i.e., protrusion with hooklets). The rostellum of H. nana is generally smaller than that of T. solium, and is often retracted. 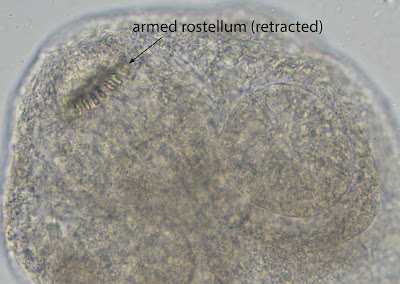 The presence of characteristic H. nana eggs allows for definitive identification. Note the filaments emanating from each pole of the inner membrane. 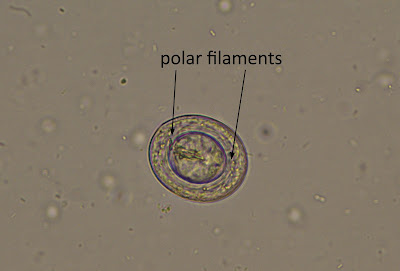 Posted by ParasiteGal at 6:20 PM No comments:

This week's case was generously donated by Monica Jarvis, Lilian Flores, and the parasitology lab at the North Carolina Department of Health and Human Services. They identified the following structures in a stool wet mount. They measure approximately 160 micrometers in length. Identification? 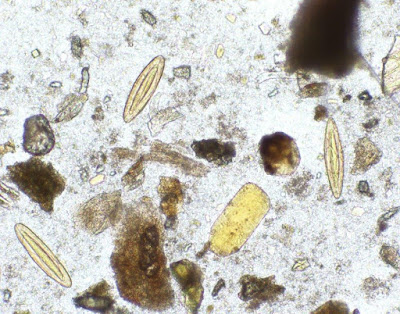 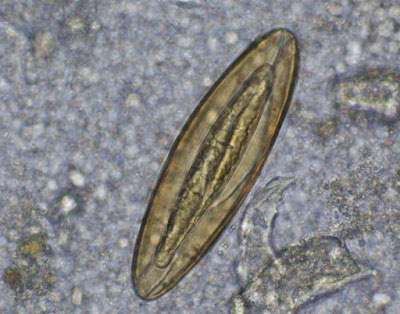 Posted by ParasiteGal at 5:08 PM 9 comments:

Answer to the Parasite Case of the Week 663: Not a human parasite; "Beaver bodies".

Beaver bodies are sporocysts of the unicellular, eukaryotic protozoon, Psorospermium cf. haeckeli (Hilgendorf 1883), a parasite of crayfish. They may be seen in the stool of individuals after eating crayfish, and thus obtaining a dietary history may be helpful. Sporocysts are the host-dependent stage, and are released into the environment after the crayfish host dies. In nature, free-living amoeboids emerge from the sporocyst and are capable of infecting new crayfish.

The genus Psorospermium is located phylogenetically near the animal-fungal divergenc and was formerly thought to be an alga. Only one species (haeckeli) has been described, but molecular analysis suggests that there may be multiple species.

Here is a comparison between beaver bodies and diatoms: 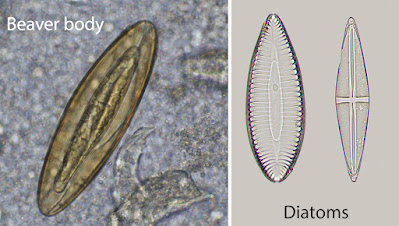 Thanks again to Monica and Lilian for sharing this great case!
Posted by ParasiteGal at 4:14 PM 1 comment: