Parasite Case of the Week 542

This week's case is a lovely gif image compiled by our excellent parasitology technical specialist, Heather Arguello. The following structures were seen on a non-nutrient agar culture that had been inoculated with corneal scrapings. The plate had been overlain with Escherichia coli to provide a food source for parasites that may be present in the specimen. The central structure is ~40 micrometers in maximum dimension, while the rounded structure to the left is ~15 micrometers in diameter. Identification?

Answer to Parasite Case of the Week 542: Acanthamoeba sp. trophozoite and cysts

The free-living amebae, Acanthamoeba species and Naegleria fowleri (but not Balamuthia mandrillaris) can be grown on non-nutrient agar overlain with bacteria to provide a food source for the organisms. In this case, the presence of a characteristic double-walled cyst and trophozoite, along with the source (corneal scrapings) allow us to identify this ameba as an Acanthamoeba species. 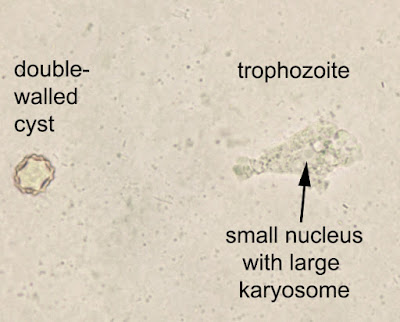 We sadly did away with our free-living amebae culture a while back and replaced it with a multiplex real-time PCR assay. It's faster than culture, while providing equal sensitivity, so it is better for patient care. However, I do miss seeing these cool organisms grow in culture!

Posted by ParasiteGal at 8:27 PM 4 comments:

This week's case was generously donated by Drs. Mauro Saio and David Hamer. The patient is a middle-aged male who noted the following objects in his stool. Individually, they measured approximately 1 cm in length. Identification? 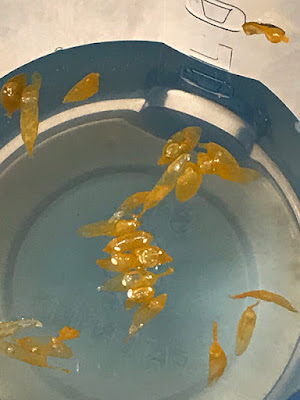 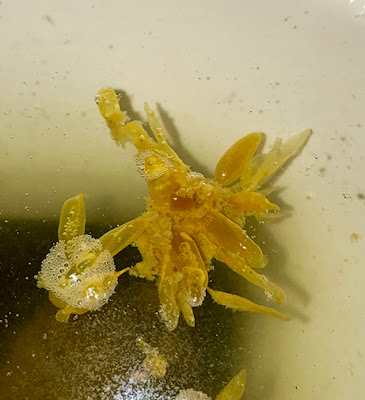 Posted by ParasiteGal at 9:20 PM 9 comments:

Answer to Parasite Case of the Week 541: not a parasite; citrus juice vesicles.

This is a not-uncommon finding in stool that is helpful to recognize, since it is occasionally submitted as a potential parasite. In this case, the patient reported eating clementines regularly. So here is a dissection of a clementine for comparison: 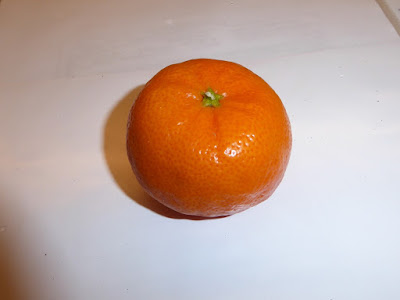 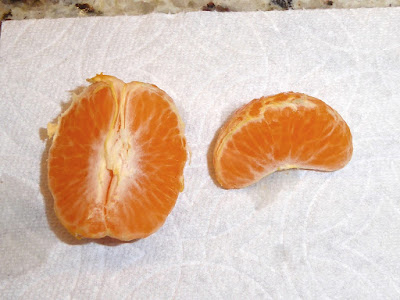 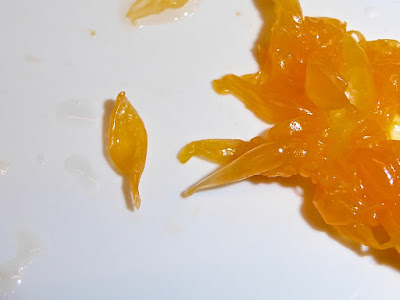 Pretty good, huh? Of course it's not possible to recognize the type of citrus from this case alone, and a report of "not a human parasite" is usually sufficient for patient care. 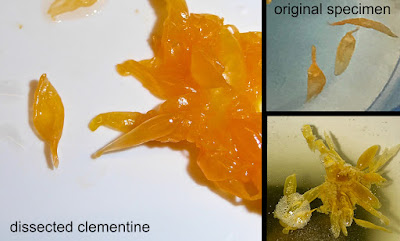 Wikipedia has a nice article on juice vesicles if you would like more information.
Posted by ParasiteGal at 6:53 AM 3 comments:

This week's beautiful photographs are from Emily Fernholz at my lab. These objects were seen in a human stool specimen and measure approximately 80 micrometers in length. Identification? 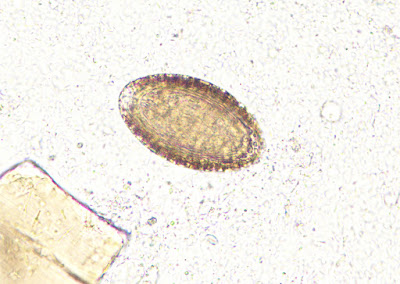 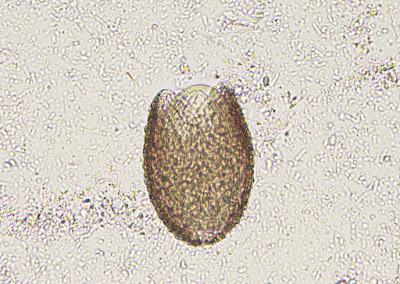 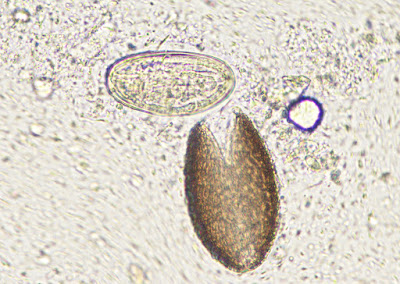 The features are nicely appreciated on this video:

Answer to Case of the Week 540

Answer to Parasite Case of the Week 540: Macracanthorhynchus species, one of the acanthocephala ("thorny-headed worms"). M. hirudinaceus or M. ingens would be the most likely culprits, although as mentioned by Florida Fan, we would need the head of the worm to morphologically identify this to the species level. The acanthocephala are common parasites of animals, but only rarely infect humans. Infection is acquired through ingestion of an infected arthropod such as a millipede or beetle.

The eggs are very striking. They are ovoid and measure 80-100 micrometers in length. As described by Bernardino Rocha, they are dark brown egg with a thick rugged textured shell. Within the egg is the characteristic larval form (acanthor) with rostellar hooks (which you can sort of make out in this egg). 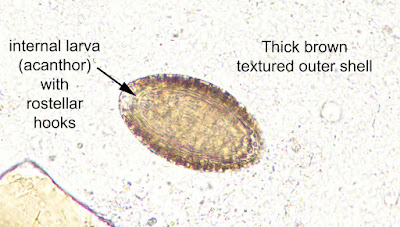 Interestingly, Macracanthorhynchus eggs are rarely seen in human stool. Blaine Mathison mentioned that this worm can occasionally reach sexual maturity in the human host and can even produce mature eggs; for some reason, however, the eggs are either not readily shed from the female, or are shed in such low numbers that they aren't commonly seen. Blaine also speculated that the eggs could be missed in O&P exams due to lack of technologist familiarity with them. Finally, there is the possibility of spurious passage from ingestion of soil or pig intestines containing the eggs/worms.

Of note, this particular patient had a follow-up specimen several days later which still contained Macracanthorhynchus eggs. Thus, my hypothesis is that this represents true infection rather than spurious passage.

This week's beautiful case was donated by Florida Fan - a finding in a concentrated stool specimen: 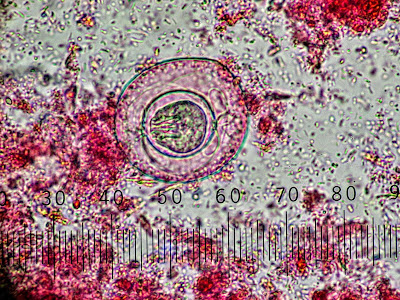 The scale bars each represent 2.5 micrometers.
Identification?
Posted by ParasiteGal at 1:22 PM 18 comments:

Answer to Parasite Case of the Week 539: Hymenolepis nana

This beautiful egg donated by Florida Fan nicely demonstrates all of the classic features of H. nana, including the thin inner membrane surrounding the hooked oncosphere [*] from which polar filaments arise. The polar filaments arise from opposite poles of the inner membrane (arrows) and spread out into the space between the inner and outer membranes, thus providing a key differentiating feature from the filamentless-Hymenolepis diminuta. 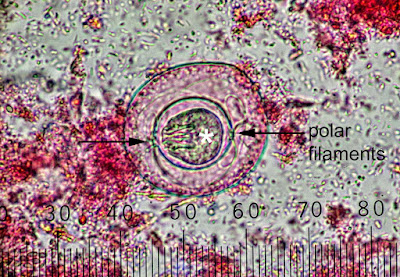 Blaine wrote a poem for this parasite back when I featured it in 2013. Here it is again for your enjoyment:

If you google "oatmeal" and "bugs," you will find multiple consumer complaints (and some nice YouTube videos) to explain the oatmeal reference!
Posted by ParasiteGal at 8:21 PM 1 comment:

Here is our fun monthly case from Idzi Potters and the Institute of Tropical Medicine, Antwerp:
Your boss brings in some wormy things and mentions that “his cat regurgitated these in the morning”.
What is your diagnosis? Risk for humans? 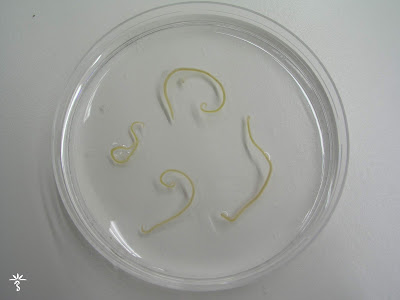 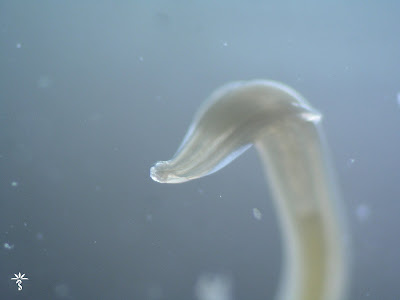 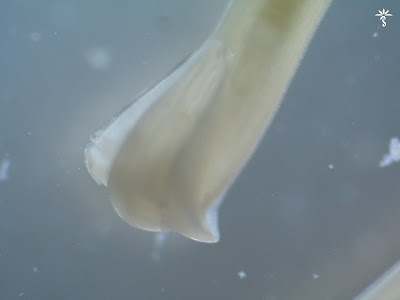 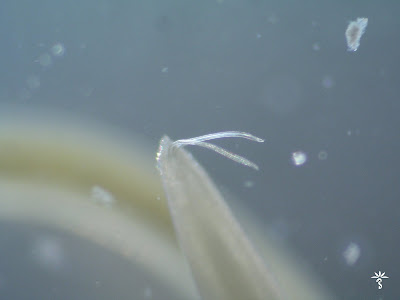