Several small dark-colored irregular "soot-like" objects (~1/4 inch long x 1/8 inch wide) were found floating on the surface of murky water in a neglected bird bath in late Spring. One such cluster was scooped out mostly intact and mounted on a slide for further examination. It is shown below.  Identification?

The following fields were taken of a Giemsa-stained peripheral blood film from a businessman who recently returned from India.  Diagnosis?

Posted by ParasiteGal at 4:35 PM 6 comments:

As noted by Anon, Lee, and Marco Ligozzi, the diagnostic features include: 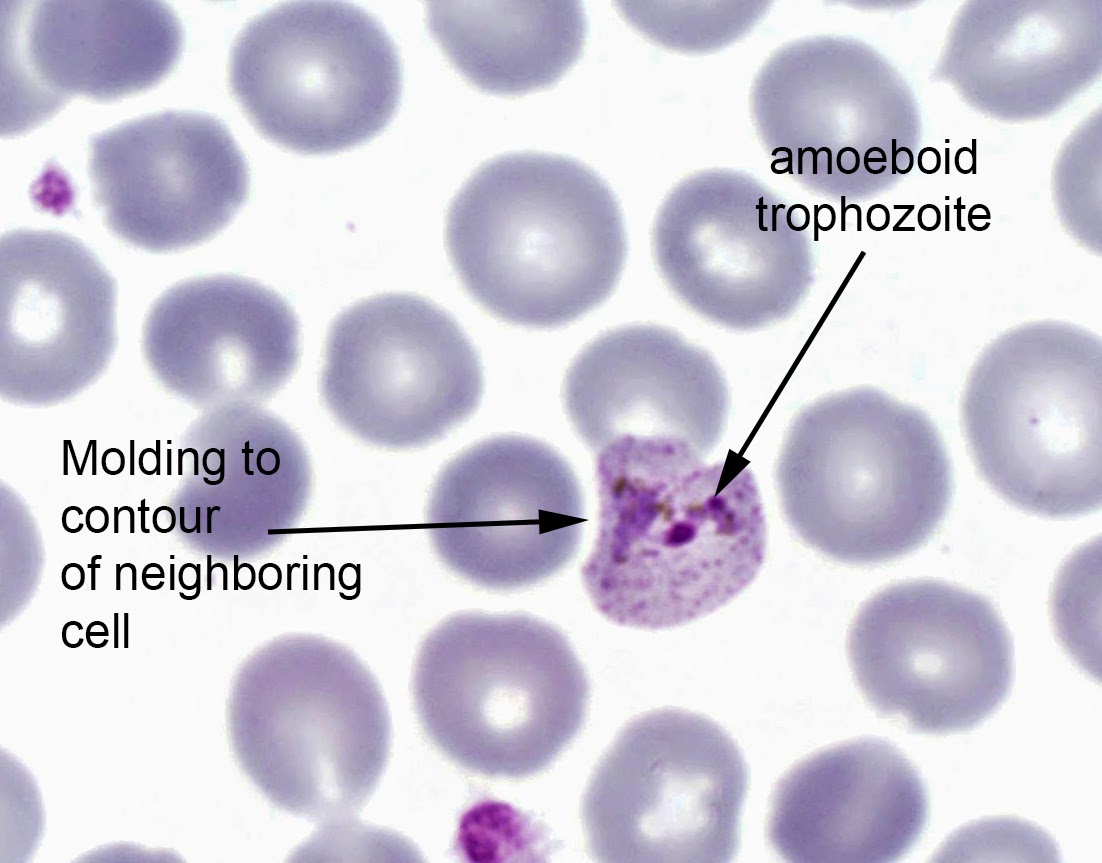 The primary differential based on the morphology is Plasmodium ovale, which also infects younger (thus larger) RBCs and exhibits Schüffner's stippling.  It can sometimes be challenging to differentiate between the two species, particularly when only a few parasites are present.  The main differentiating features that P. ovale exhibits are oval shape (seen in approximately 1/3 of infected cells), darker/coarser hemozoin pigment, fimbriated (ragged) edges of the infected RBCs, and more compact trophozoite forms.  The P. ovale schizont stage also has fewer merozoites than P. vivax.
Posted by ParasiteGal at 2:54 PM No comments:

Dear group,
We are now on our 300th case! This blog was 'born' in 2007 as a way for me to share cases with just a few clinical microbiology fellows at my institution.  I am now very proud (and amazed) to say that this blog has expanded to have an international viewership and receives more than 14,000 page hits each month from individuals with a wide variety of backgrounds and interests.  Your readership and comments continue to inspire me.  Thank you!

The case for this week consists of several strands of hair from an elderly man living in a skilled nursing facility.  What is your identification? 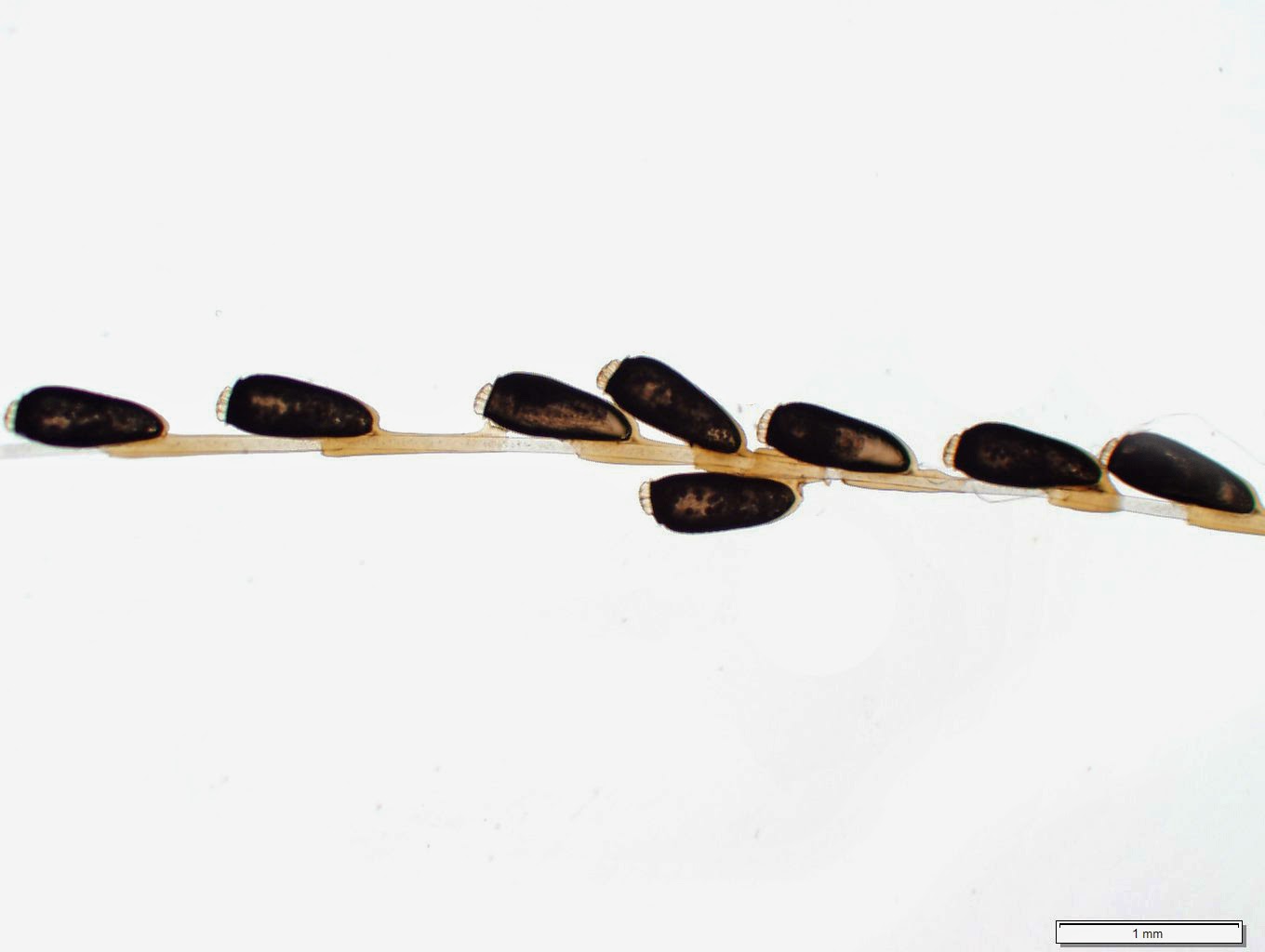 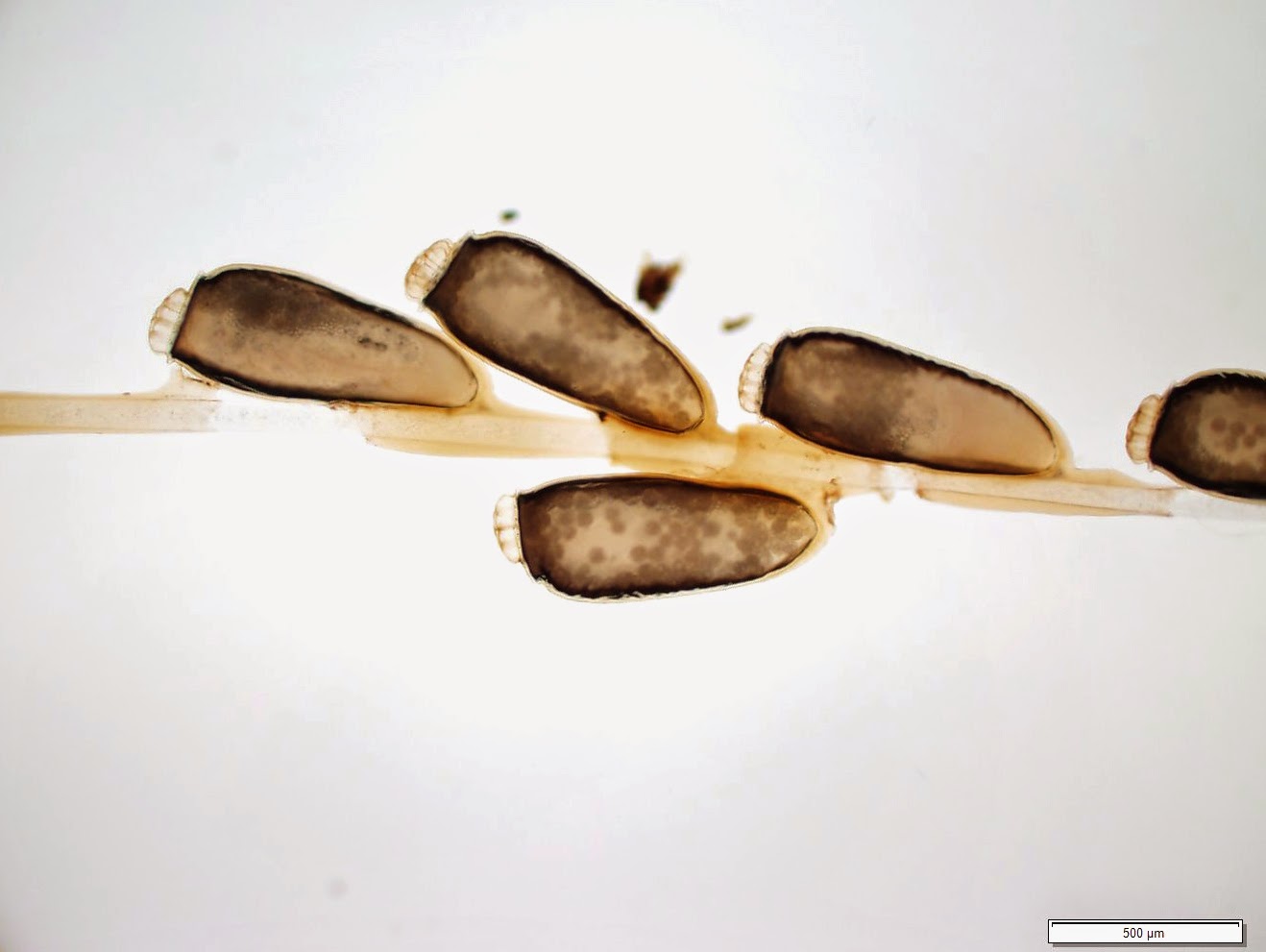 Answer:  Pediculus humanus nits (eggs).  This case was striking in that there were a large number of nits on these strands of hair, indicating a heavy infestation.

Given the location of the nits on hair, this is most likely the head louse (P. h. capitis) rather than the body louse (P. h. humanus).  The crab louse, as some readers suggested, also lay their nits on hair, but these nits can be differentiated by their taller operculum: 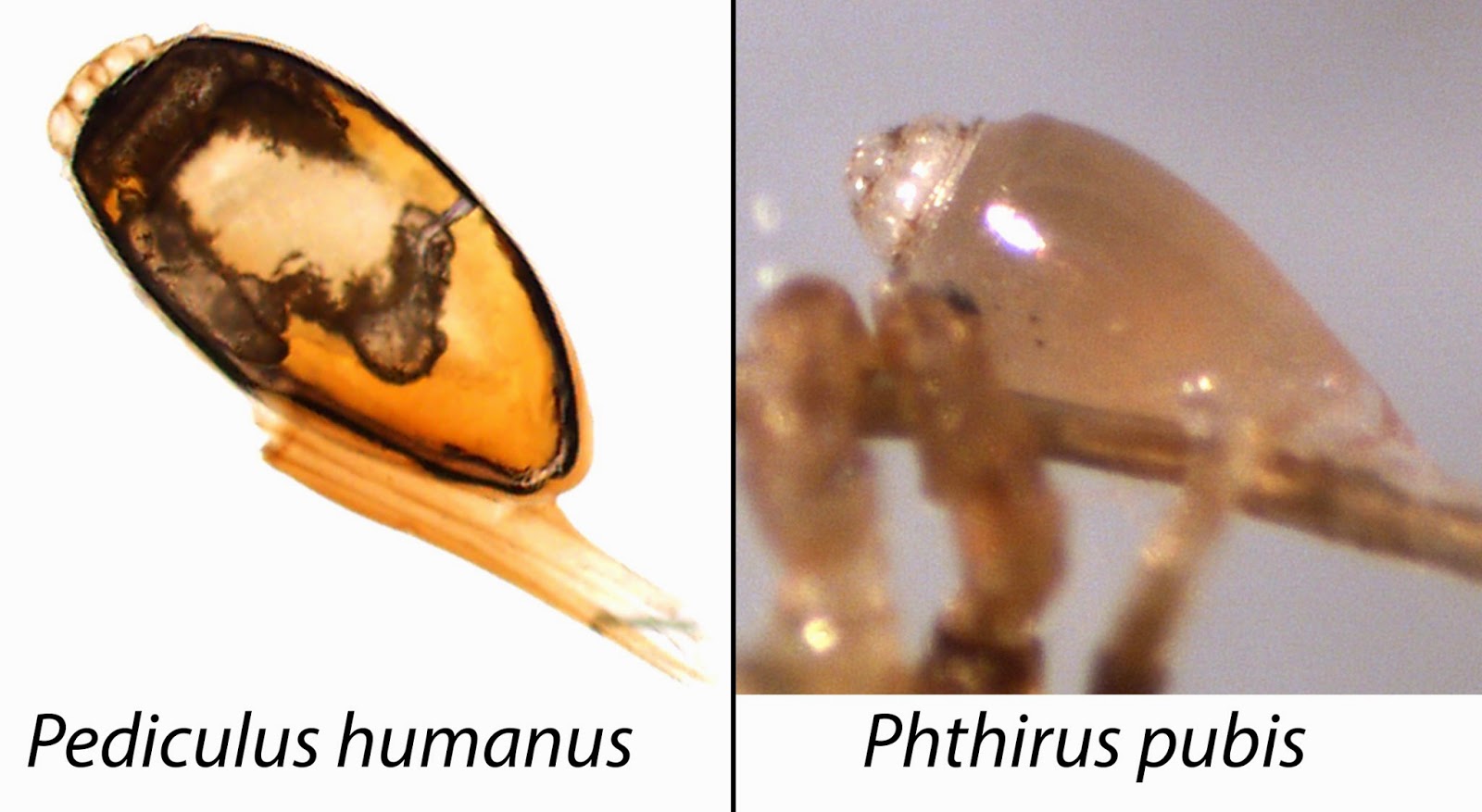 Due to the very infectious nature of head lice, the other residents of the nursing facility should be examined and treated for head lice if appropriate.


And now our poem from Blaine:


To Bobbi’s lab some ID fellow did submit
Objects plucked from the head of an elderly Brit.
For the general rule of thumb
When one sees a flat operculum
Is that it’s likely a Pediculus humanus nit
Posted by ParasiteGal at 2:19 PM No comments:

The following object was noted in a routine endocervical Papanicolaou-stained smear.  Identification?  How would you sign this case out?  This case was generously donated by Tony Rollins CT(ASCP) and Dr. Harvey Cramer, MD. 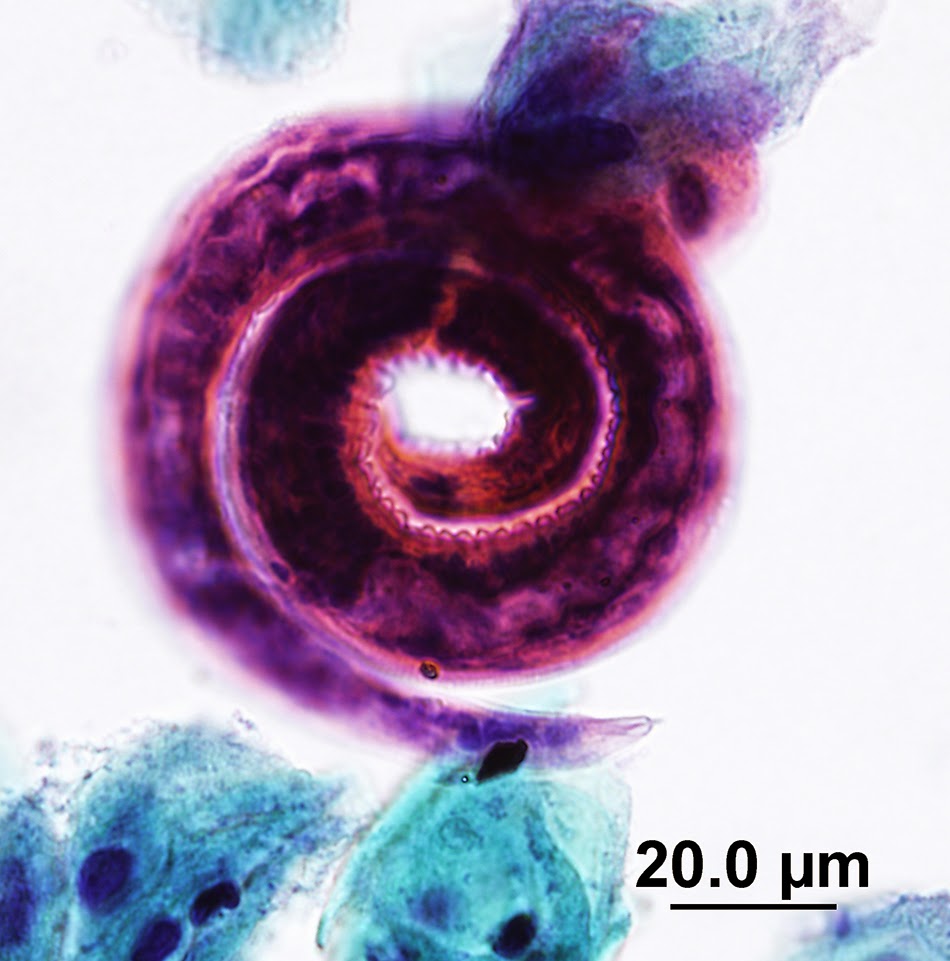 Answer:  Not a human parasite.

This is an incidental finding of a free-living plant/water nematode that likely contaminated the specimen during collection, transport, or staining.  If this had been my case, I probably wouldn't even make mention of the nematode in the actual patient report to avoid unnecessarily raising concerns for the clinician or patient.

If this been a more significant problem (e.g. there had been a lot of these worms present), then I would have taken additional steps such as examining the reagents used in my lab and having a discussion with the clinician about what the patient might have using (e.g. naturopathic douches) that could have introduced the worms into this location.

Many of you wrote in with some good suggestions of what this worm could be, including a variety of human parasites that have similar morphologic features or could conceivably end up in an endocervical location. However, these parasites can be ruled out based on their larger size and lack of expected features (e.g. no narrow anterior end for Trichuris trichiura or no thin pointed tail for a female Enterobius vermicularis. I think that the most challenging worm to rule out was an anisakid (Anisakis sp. or Pseudoterranova decipiens) based on what appeared to be a posterior mucron (see below).  However, this is a look-alike; the structure we are seeing is actually a stylet at the anterior end of the worm, which may be seen in a variety of free-living nematodes. Fortunately size is a helpful differentiating feature; the worm in this case is less than 300 micrometers in length while anisakid larvae are 20 to 35 millimeters in length. 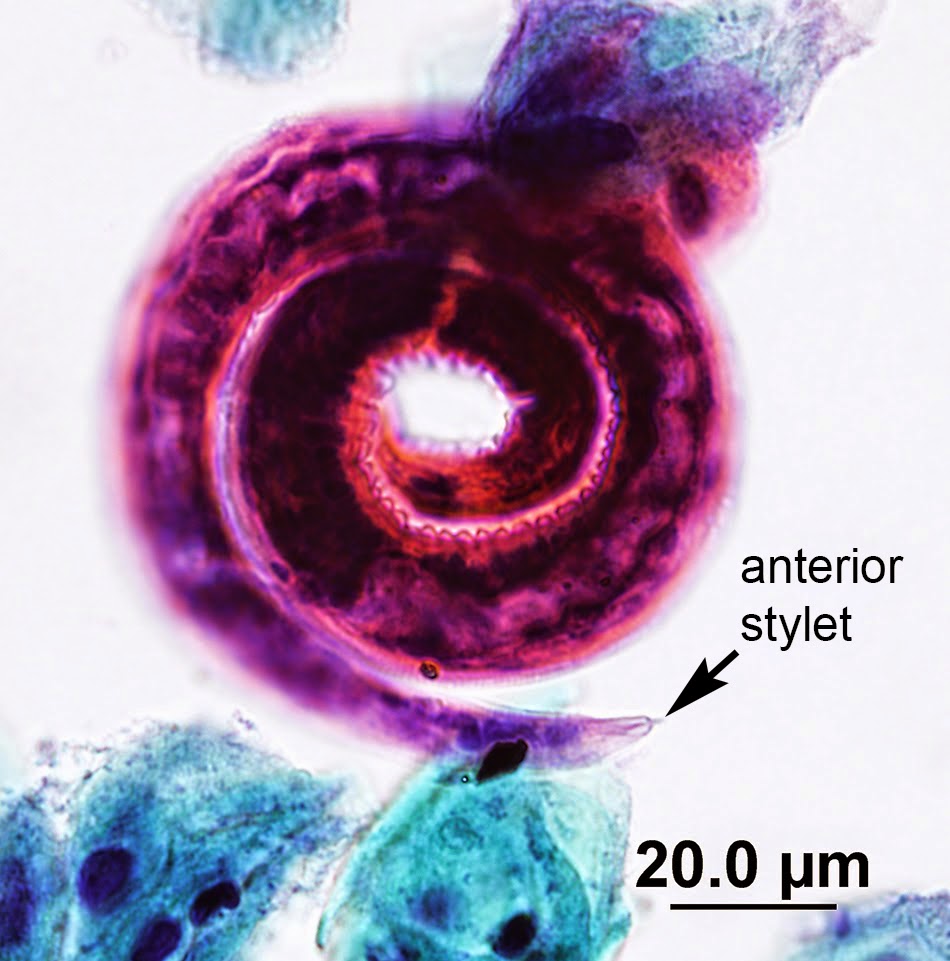 Thank you all for writing in on this case!
Posted by ParasiteGal at 12:01 PM No comments:

The following was submitted for parasite identification.  The source of the specimen is "found in stool"
Identification? 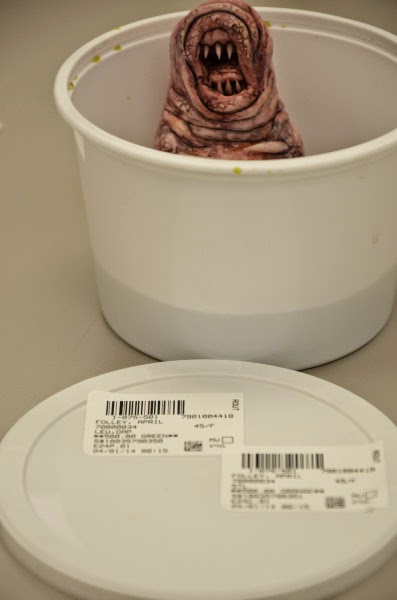 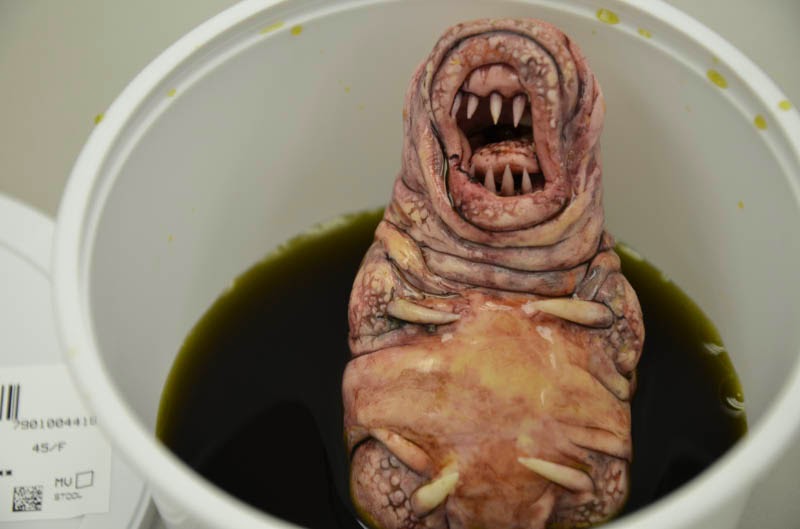