We had a number of great arthropod cases in the past few weeks! Here's one that had us stumped for a little while:

The following live objects were noted on a tampon brought in by a female patient to her  gynecologist. The patient also reports that these objects are being shed in her stool and urine.

Examination of the specimen revealed a clearly-used tampon containing the following objects - many that appeared to be superficially embedded in the cotton fibers: 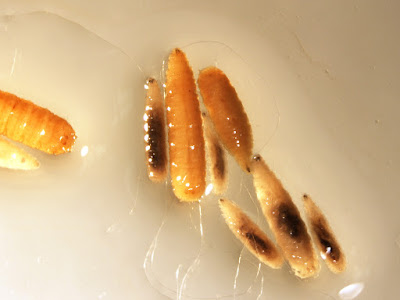 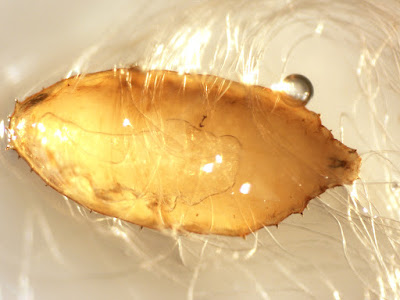 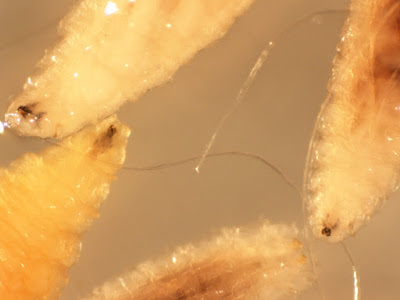 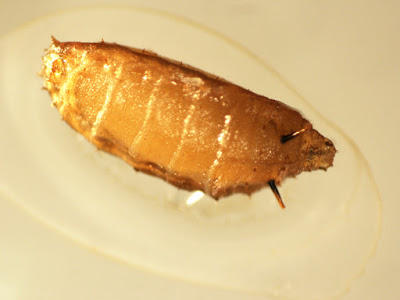 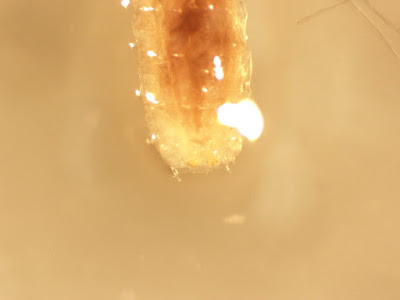 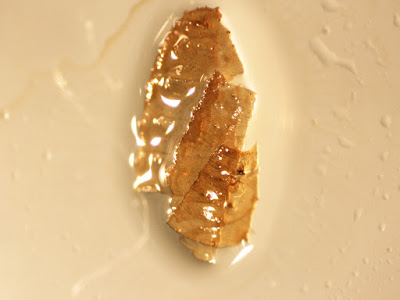 Identification? What additional information would you like?
Posted by ParasiteGal at 7:53 PM 10 comments:

Answer:  Fly larvae; most likely representing involvement of the tampon in the environment rather than in the patient.

As described by Florida Fan and Anon, this is supported by the presence of different larval stages and a possible pupa with respiratory structures. Pupal casings were also seen, indicating that at least 1 adult fly had hatched. There also appears to be more than 1 genera of fly present. 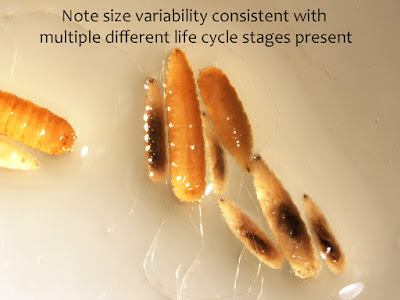 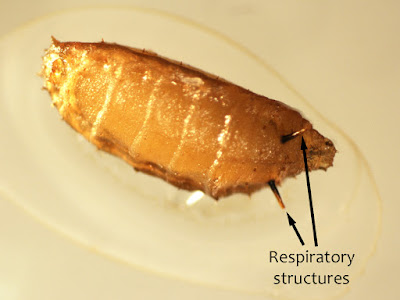 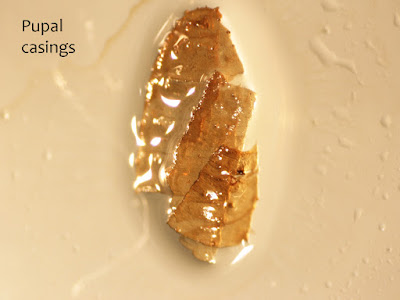 If this had all been in the patient (e.g. facultative or obligatory myiasis), then we would have expected the larvae to be in the same stage and of the same genus, unless there was a wound exposed to the environment which different flies were continuing to lay eggs in.

Discussion with the physician revealed that the patient did not have a wound, and that the tampon had been brought in by the patient, rather than being removed by the physician. Therefore, the most likely explanation for this case is that the tampon had been discarded in an open trash can that was exposed to flies. The patient is now likely traumatized by finding the tampon covered in fly larvae, and is understandably concerned that she is also passing larvae in her urine and vaginal secretions. The best course of action for the physician is to explain the situation and reassure her that she does not have myiasis.

Thank you to Blaine Mathison for helping me accurately describe the flies in this case!

Posted by ParasiteGal at 3:01 PM No comments:

This week's case is a blood specimen from an elderly gentleman from Arkansas. He is asplenic and has received multiple blood transfusions for chronic anemia. Below are images from Wright-Giemsa stained thin films taken by our Clinical Microbiology fellow, Poornima. 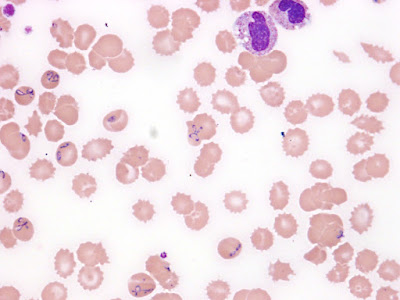 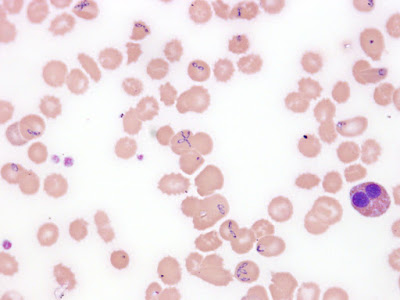 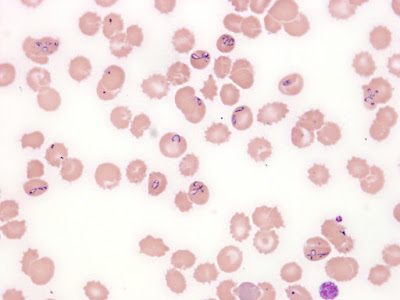 Identification?
What is the likely species involved in this case?

Answer: Babesia sp.
Interestingly, this case was identified as Babesia divergens/MO-1 strain by PCR testing. The currently unnamed MO-1 strain (found in Missouri) is closely related to B. divergens, a pathogen of cattle in Europe. Since the description of the MO-1 strain, other B. divergens-like organisms have been detected in Kentucky and Washington states. 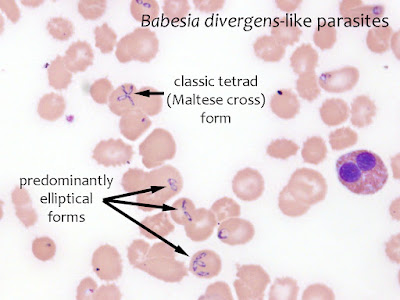 Although it would be difficult to differentiate B. divergens-like parasites from B. microti based on morphology alone, the presence of predominantly small elliptical forms with prominent tetrads should raise the suspicion for the former parasite.

This week's case is a peripheral blood smear from a 52 year-old businessman from India. Identification? 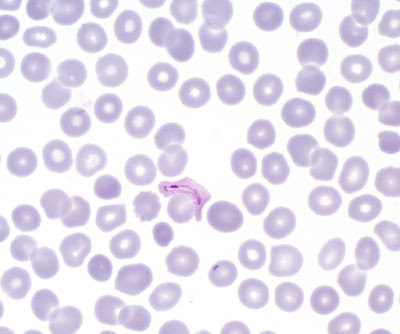 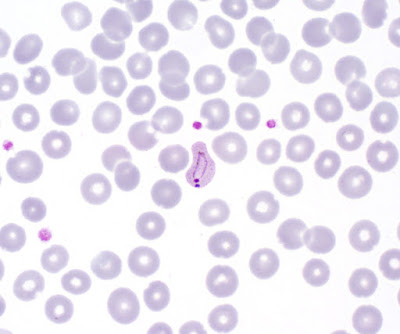 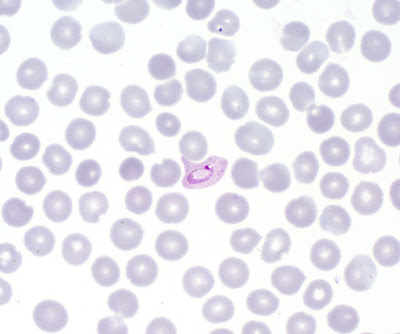 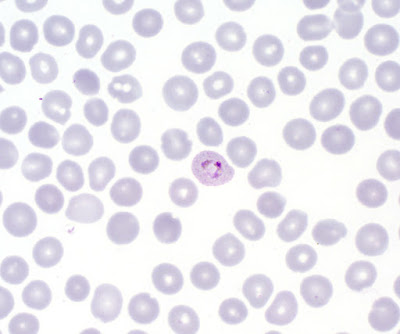 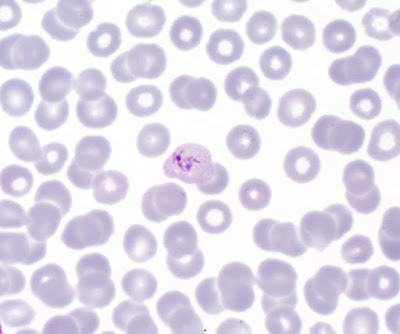 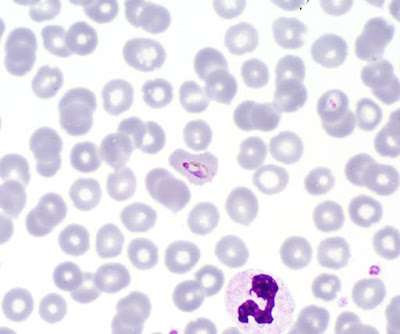 Posted by ParasiteGal at 4:09 PM 7 comments:

Thanks to everyone who wrote in on this case. As nicely described by Florida Fan, Yasir and Antonio, the infected red blood cells are larger than the uninfected neighboring cells and Schuffner's dots (stippling) are present, thus indicating that this is either P. vivax or P. ovale infection. You can then narrow down the choices by noting the ameboid chromatin which is most consistent with P. vivax. Some softer features of P. vivax that are also seen in this case are the 'hugging' or 'molding' of infected cells to neighboring cells and the predominance of rounded rather than oval forms. 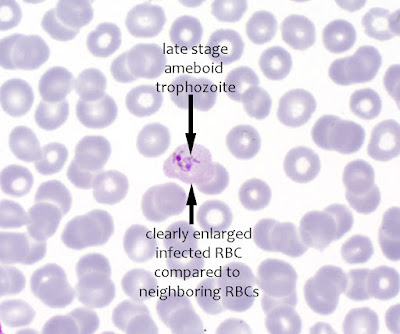 Florida Fan does point out that the last picture shows what appears to be fimbriation (jagged edges) which is commonly seen in P. ovale. I However, this is also a rather soft feature when only seen occasionally, and I wouldn't let a single cells with possible fimbriations steer me towards P. ovale if the other features are supportive of P. vivax. (I added this last photo in to see if it would fool anyone and was very happy to see that it didn't! You are all too smart for that).

Finally, the history of travel to India is most consistent with P. vivax infection, since this species is responsible for the majority of malaria cases there (with P. falciparum causing most of the remaining cases). In comparison, reports of P. ovale malaria in India are very rare.

Posted by ParasiteGal at 7:25 PM No comments:

This lovely little family was submitted by Florida Fan. Identification? 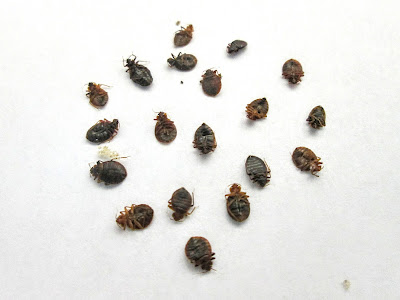 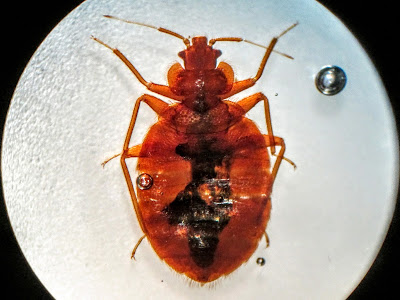 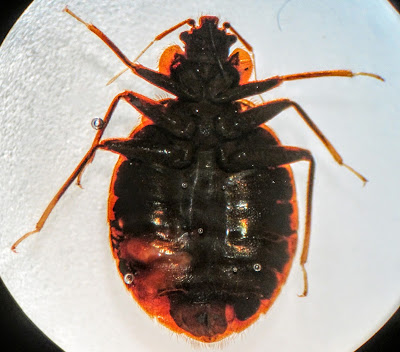 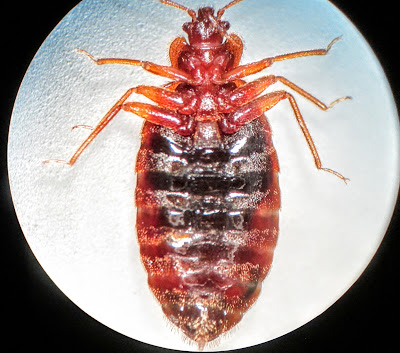 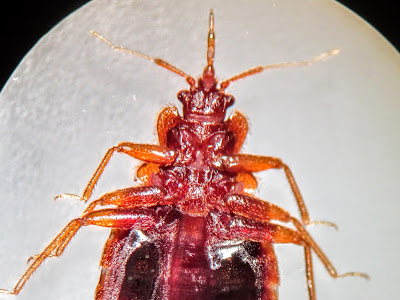 Posted by ParasiteGal at 9:28 AM 7 comments:

Answer: Cimex lectularius, the common human bed bug. The other human bed bug is Cimex hemipterus, the tropical bed bug. While C. lectularius has a cosmopolitan distribution, C. hemipterus is found primarily in tropical regions. These 2 species can be differentiated by subtle morphologic features, which I won't get into here. As seen in this case, human bed bugs have a broad oval dorso-ventrally flattened body, short rudimentary front wings, and a laterally-flared pronotum lined with setae (hair-like structures). 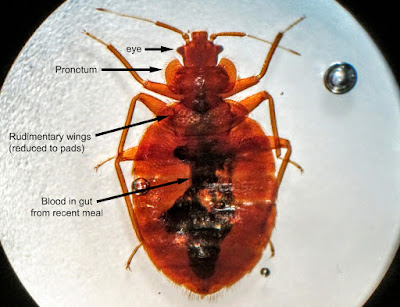 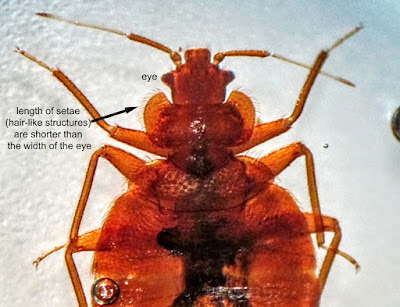 Here is a bat/bird bed bug for comparison. Note the prominent long setae. 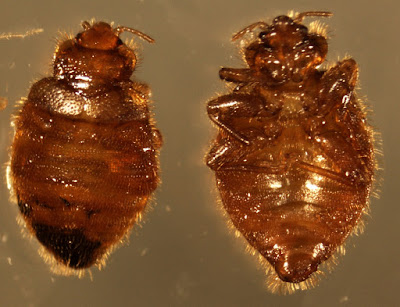 Posted by ParasiteGal at 3:00 PM 5 comments: