The following objects were seen on a peripheral blood film from a 36 year old male who recently returned from an African safari.  Identification? 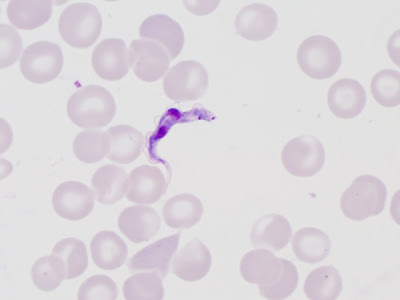 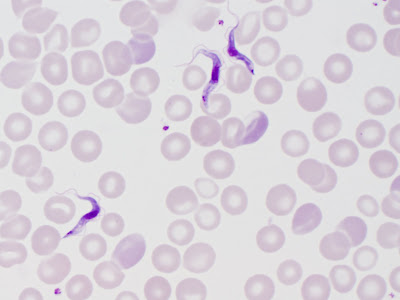 What is happening in this image (arrow)? 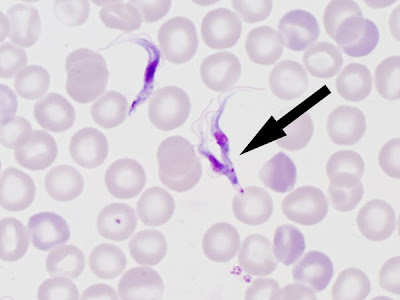 Posted by ParasiteGal at 5:24 PM 5 comments:

Note the trypomastigote that is preparing to divide by replicating its internal structures: 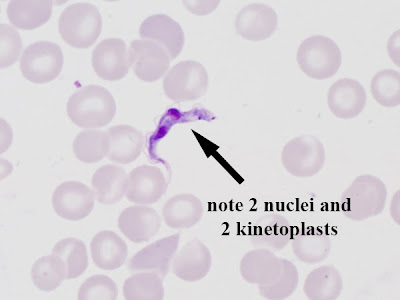 Here is a trypomastigote which has almost completely divided: 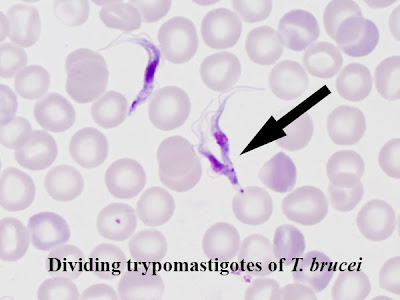 Thanks for all of the comments!
Posted by ParasiteGal at 8:22 AM 3 comments:

The following were found in a stool specimen from a 52 year old immigrant from Vietnam with pancreatitis and right upper quadrant pain.  They measure between 30 to 35 micrometers in length.  Identification? 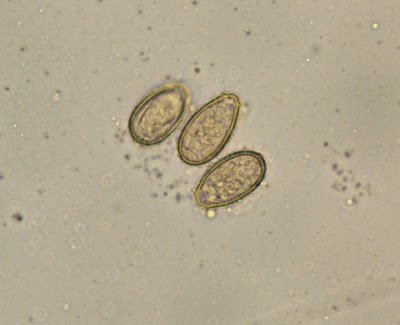 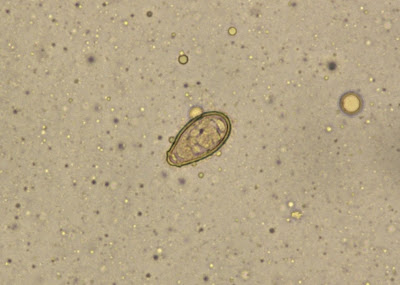 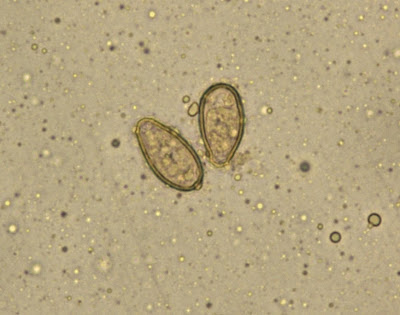 What is a feared complication of infection?
Posted by ParasiteGal at 3:53 PM 6 comments:

The characteristic features of these distinctive eggs are their small size (19-35 micrometers in length), 'urn' shape, shouldered operculum and abopercular knob: 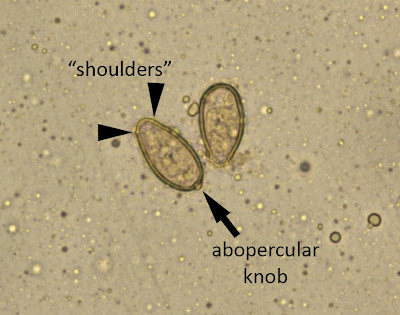 The eggs of Opisthorchis sp. are slightly smaller than those of Clonorchis sinensis, but there is significant overlap and it is not usually possible to differentiate the two.
Posted by ParasiteGal at 5:12 PM No comments:

This case was generously donated by Florida Fan.  The following object measures approximately 4 cm in length.  It is stained with a Carmine stain.  Identification? 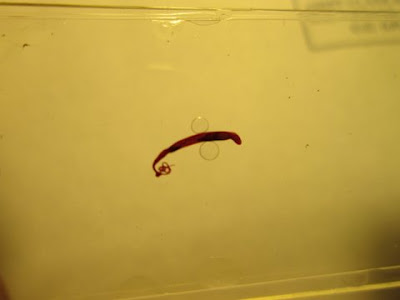 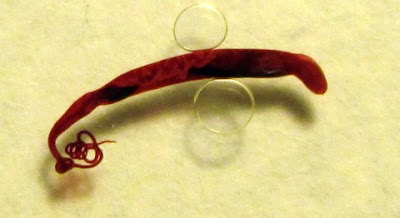 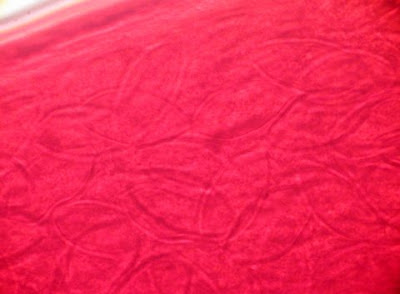 Bonus question:  Which end is this? 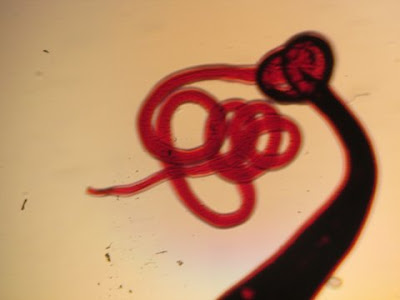 Posted by ParasiteGal at 6:54 PM 6 comments:

The overall shape of the worm (resembling a whip) is diagnostic, as are the outlines of the characteristic eggs seen within the worm (compare to the egg that I superimposed on the image): 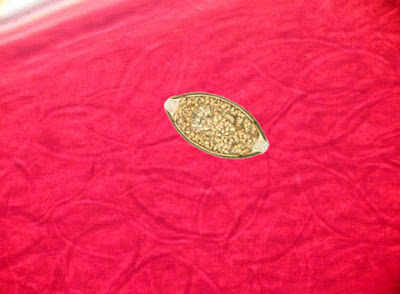 With a little imagination, you can see where the bipolar plugs of the intrauterine eggs are. The presence of eggs lets us know that this is a female.  Also, the tail (the thicker portion of the worm) is not curled; males have curled tails while females have straight tails.

So the answer to the bonus question (as alluded to above) is that the end shown below is the head: 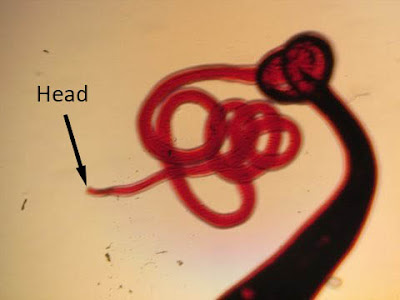 As Heidi points out, this is opposite to what most people would think.  To help my students understand this, I use the following explanation:

First, think of how the worm lives inside the human intestinal tract:  it embeds one end into the colon wall while the rest hangs in the lumen.  If you had to choose one end of the worm to embed into the colon, it would make sense to choose the thin needle-like end and not that fat blunt end. Hence, the thin end is embedded and the thick end hangs free.

OK, so that answers the question of how the worm is oriented in the intestine, but which end is which?
To answer that, think about egg production:

The female whipworm produces hundreds of eggs which need to be excreted in stool in order to continue the worm's lifecycle.  Therefore, it makes sense that the part of the worm containing the uterus packed full of eggs hangs in the lumen, where eggs can easily be deposited with the stool.  The head is the thin part that is embedded into the colon wall.

So it all makes sense after all!

And now our poem from the talented Blaine Mathison
(for Henry B. and all other Case of the Week Viewers):

"Colonoscopy?!?!" Henry was about to flip!
For he certainly didn't want to make that trip
So many horrors on his mind
of what the doc might find,
such as Trichuris flailing around like a whip!


Posted by ParasiteGal at 11:25 AM No comments:

The following were removed from the small intestine during upper endoscopy for abdominal pain.  Identification?  The larger of the 2 measures 1.3 cm in length.  Bonus points for identification to the genus and species level. 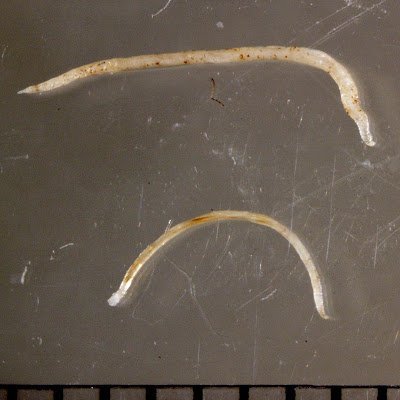 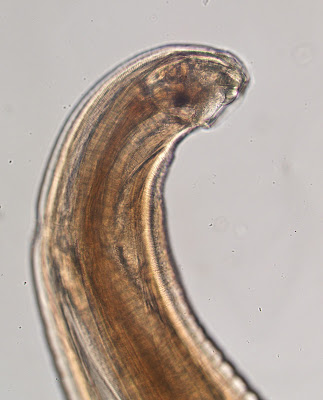 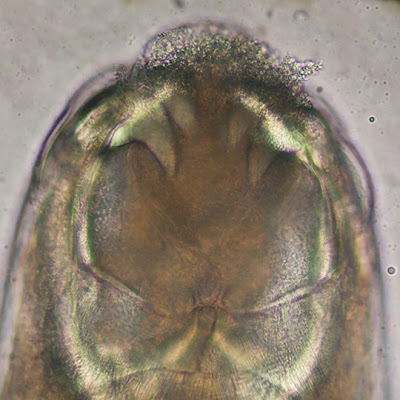 Posted by ParasiteGal at 9:00 AM 8 comments:

I received some great comments on this case!
From Lukus:  "Ancycloctoma duodenale - the twin ventral plates with 2 teeth each differentiate it from A. caninum which has ventral plates with 3 teeth each.  The large worm is likely a female and the smaller a male. 1.3 mm is pretty much the top range for adult females."

Florida Fan further elaborates with "the smaller one is the typical male with its terminal copulating bursa on the left side of the picture."

Wow - extra bonus points for differentiating the male and female worms. I had only asked for the species which everyone got correct.

This indeed Ancylostoma duodenale, which has a pair of 2 vampirey teeth versus the pair of 3 as Lukus pointed out (it is one of my pet peeves when educators grab the first photo of Ancylostoma they find on their Google search and call it an A. duodenale when it's actually an A. caninum...)

Also, as both Lukus and Florida Fan point out, the male is at the bottom of the first image, which can be differentiated by its smaller size and blunt ended tail: 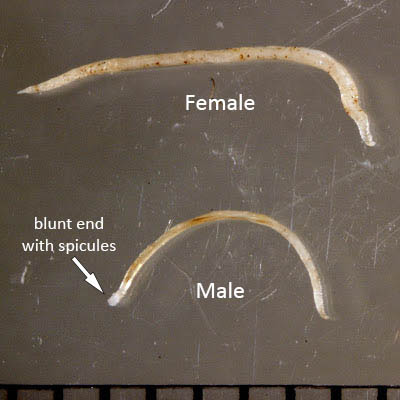 If you were to look at the tail under the microscope, you would see that the tail ends in multiple points: 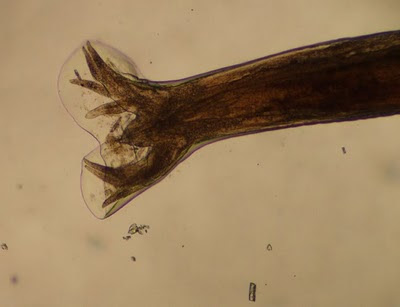 The female, on the other hand, has a pointed tail.
Posted by ParasiteGal at 6:43 PM No comments: