Happy Monday everyone! I'm on vacation this week, so here is a nice straight-forward identification for your viewing pleasure. A trichrome-stained stool specimen: 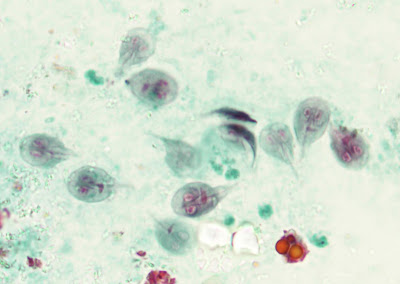 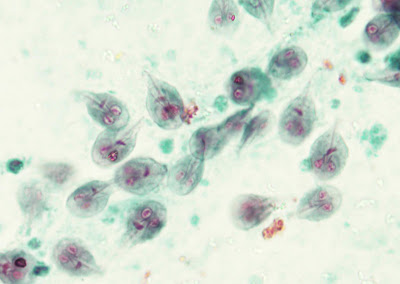 Images courtesy of Emily Fernholz. Identification?
Posted by ParasiteGal at 8:07 AM 11 comments:

As one of my twitter viewers comments - it's a Giardia party! Thus the inspiration for today's photo: 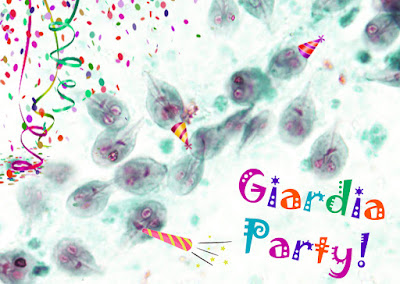 If you haven't done so already, I encourage you to read the posted comments from this case. They are very interesting and educational.
Posted by ParasiteGal at 9:40 AM 1 comment:

This week's case was generously donated by Dr. Kamran Kadkhoda. The following was seen crawling out of the nostril of a young child from Southwest Asia. Identification? 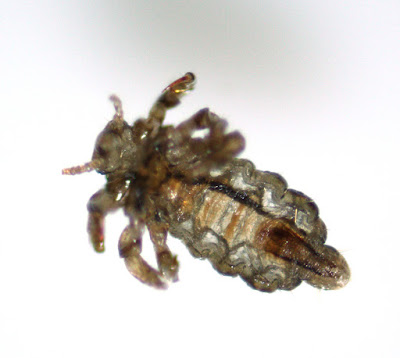 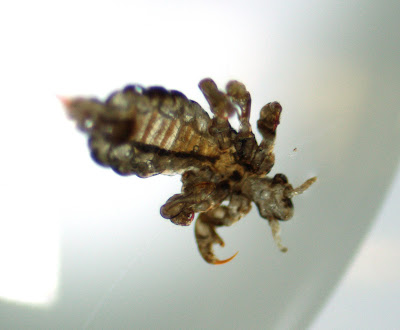 As Idzi mentioned, it is not possible to tell P. h. humanus and P. h. capitis apart by morphology alone since there is significant overlap in sizes between the 2 otherwise identical subspecies.

Richard, Florida Fan and Idzi nicely discussed the likely route of introduction into the nostril: little fingers, or possibly even inhalation. It makes me wonder though - could the lice ever live on nostril hair?

As a review, here are some of the key identifying features of Pediculus humanus:


Thanks again to Kamran for donating this case! 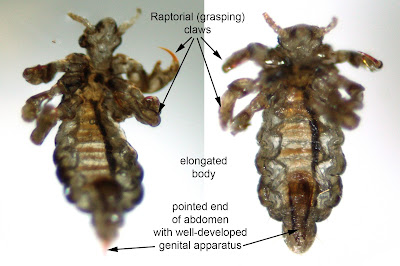 Posted by ParasiteGal at 9:18 PM No comments:

This week's case is an arthropod removed from an elderly male living on the Pacific coast of the United States. He feels well and reports that he recently returned from safari in Tanzania. 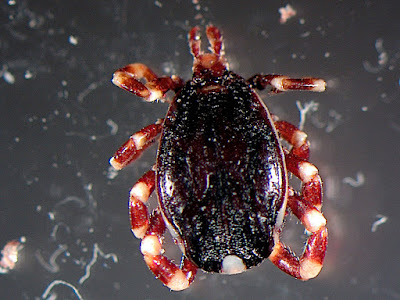 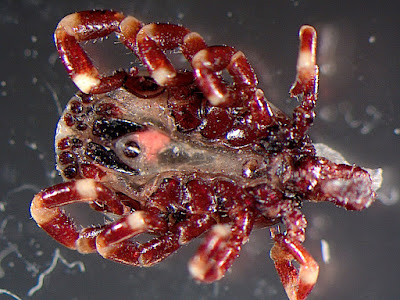 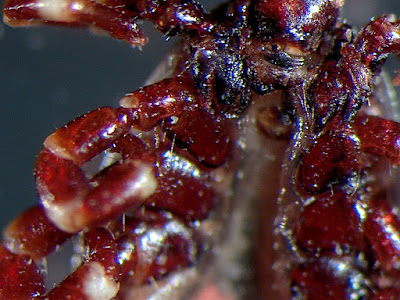 Identification?
What infectious organisms are potentially transmitted by this arthropod?
Posted by ParasiteGal at 9:12 AM 10 comments:

As many of you noted, this is one of the "Old World" ticks found in many parts of North Africa, South Africa, the Middle East, Asia, and Europe.

Here are a few important facts about this tick :

This is the second case of imported Hyalomma that has been brought to my attention in just the past 3 years, and the 3rd that Blaine has seen (!) highlighting the important of appropriate recognition and tick identification.

As Blaine and I mention in our manuscript, Hyalomma spp. might be misidentified as Amblyomma when using keys for North American ticks. We state that "Hyalomma can best be separated from Amblyomma by having festoons of varying size, an inornate dorsal shield (scutum), and spurs on the coxae I roughly equal in length." Of note, many (but not all) Hyalomma spp. also have a striking band pattern on their legs as seen in this case. 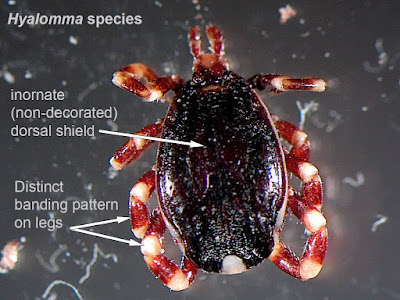 Check out our manuscript for links to various regional-specific Hyalomma identification keys. Identifying the species can be tricky due to genetic variation and morphological variations.

Posted by ParasiteGal at 11:56 AM No comments:

This week features our monthly case from Idzi Potters and the Institute of Tropical Medicine, Antwerp. The patient presented with a non-healing back furuncle shortly after returning from a trip to Bolivia. The following was removed from the furuncle: 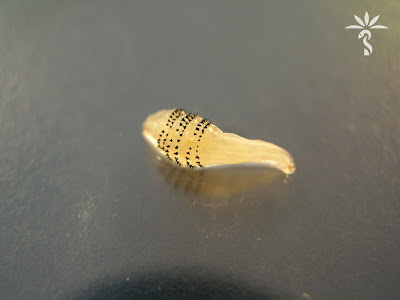 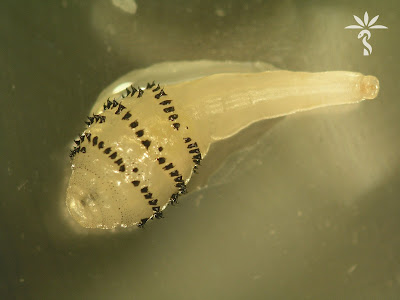 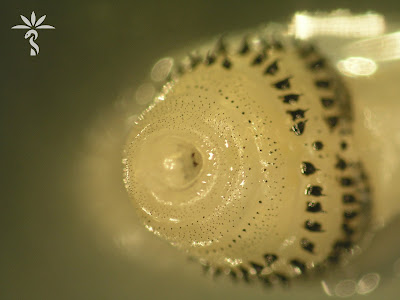 Posted by ParasiteGal at 4:00 PM 8 comments:

There are several helpful features in this case that allow for an identification to be made: 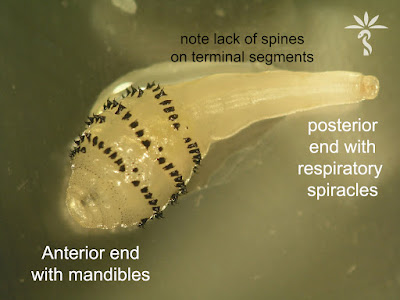 We unfortunately don't have a view of the posterior respiratory spiracles which would have sealed the diagnosis, but the rest of the features are sufficient to call this D. hominis. You can look at a previous case to see what the spiracles would have looked like: Case of the Week 347. There is also a link there to an old, but still useful, key for identifying botfly larvae commonly seen in humans.

Posted by ParasiteGal at 11:42 AM No comments:

All,
I’d like to hear from you regarding how you use my parasite case of the week blog for educating yourself or others. If you have time, please email me your answers to the following questions.
1. Do you look at the posts shortly after they come through, or do you save them for later? (feel free to elaborate)
2. Do you use them just for self-education, or also for educating others?
3. If you use the cases for educating others, please tell me how you do this (e.g. send via email, incorporate into conference or teaching rounds, etc.). I’d love to hear your specific examples.

Please email me your responses at b_pritt@yahoo.com
Thanks!
Bobbi
Posted by ParasiteGal at 3:05 PM No comments: