An elderly man had a lung nodule resected due to concern for malignancy. Below are sections of the formalin-fixed paraffin embedded tissue. Identification? 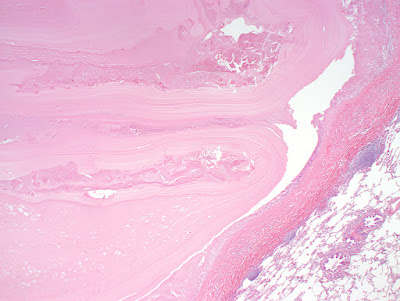 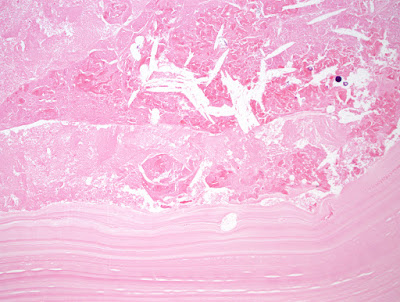 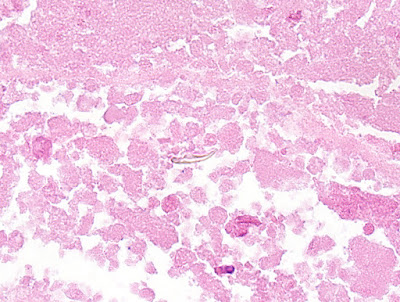 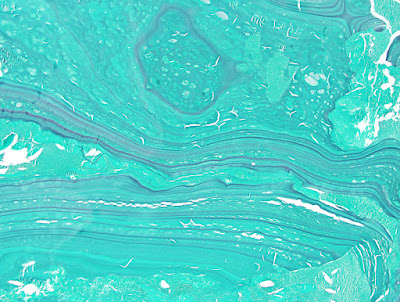 Posted by ParasiteGal at 8:35 AM 7 comments:

The first image demonstrates the edge of the large cyst with collapsed laminated membranes, suggesting that this could be infection with Echinococcus granulosus. However, it is not possible to definitively determine the infecting species without seeing the entire lesion. E. granulosus generally causes a large cyst that can contain multiple daughter cysts. Each cyst/daughter cyst is surrounded by a laminated layer. In comparison, Echinococcus multilocularis forms multiple cysts separated from one another by only cellular stroma. Unlike E. granulosus, the cysts of E. multilocularis are not contained within a 'mother' cyst and often grow in an invasive fashion into the surrounding tissue.

The diagnosis of echinococcosis is made on the following features:
1. Characteristic laminated layer that is highlighted with GMS stain.
2. Presence of a single refractile hooklet

There were no other parasitic forms such as protoscoleces present in this case, and I had to look for about 30 minutes just to find the single hooklet (!) As noted by HLCM fan, the hooklets are best seen by closing the microscope's diaphragm.

The GMS stain is helpful for highlighting the laminations when no other parasitic forms are seen and differentiating the parasitic material from fibrin (which will not stain with GMS). GMS staining can be  especially useful in cases of collapsed and degenerated cysts.

Thank you all for writing in on this case!

Posted by ParasiteGal at 8:11 AM No comments:

The following structures were seen in a Giemsa-stained peripheral blood smear from a southeast Asian immigrant. Identification? (CLICK ON IMAGES TO ENLARGE) 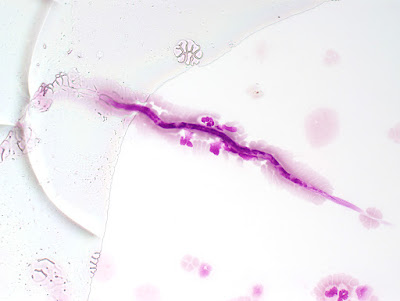 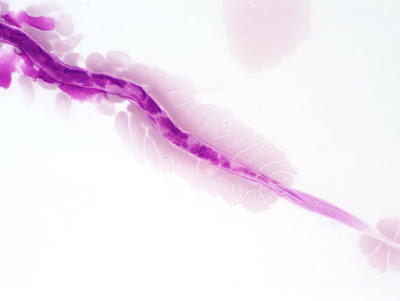 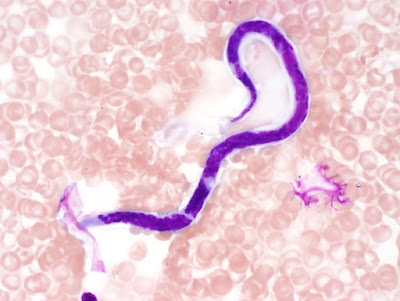 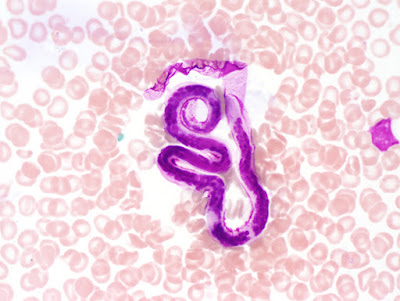 Posted by ParasiteGal at 1:01 PM 7 comments:

Several readers pointed out that these microfilariae have a clearly visible sheath. The presence of a sheath allows us to narrow the differential down to 3 microfilariae: Wuchereria bancrofti, Loa loa, and Brugia spp. These can then be differentiated by characteristics of the head, tail, and the position of the nuclei in the tail. In this case, there are widely-spaced subterminal and terminal nuclei in the tail which is characteristic of Brugia malayi. The deeply-staining pink sheath also supports this identification and allows B. malayi to be differentiated from B. timori. (CLICK ON IMAGE TO ENLARGE) 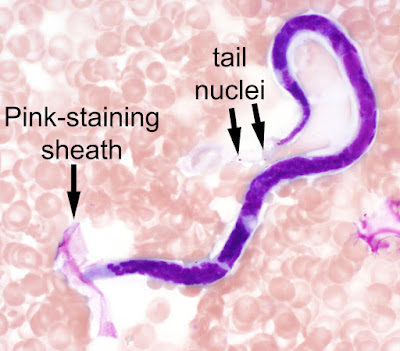 Posted by ParasiteGal at 8:33 AM No comments:

The ABCs of Ticks

Dear Readers,
I don't have a case for you this week, but instead thought I would share some information I put together on ticks and how to avoid tick bites this summer. The following link will bring you to some interactive flash cards which highlight the ABCs of ticks. It's pretty basic information, but hopefully you will find it to be useful. 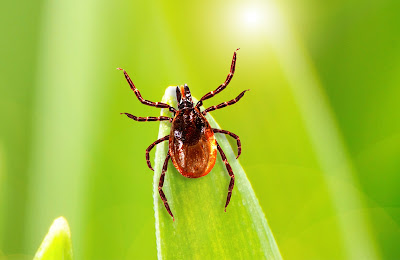 Hope you are all having a safe, tick-free summer!
Posted by ParasiteGal at 7:37 AM 1 comment:

The following images were taken from a brain biopsy of an immunocompromised patient with a mass lesion and mental status changes. Multiple organisms were seen around blood vessels and infiltrating adjacent brain tissue. These objects measure up to 20 micrometers in largest dimension. 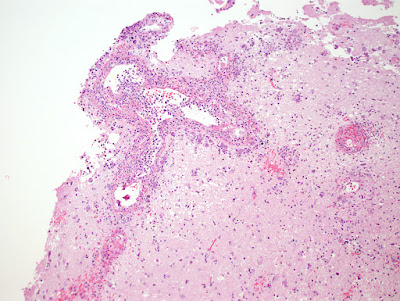 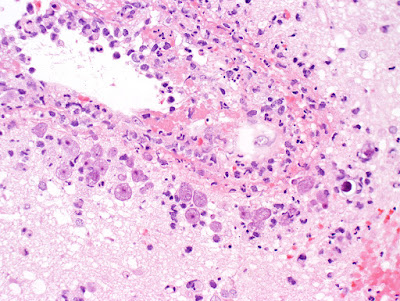 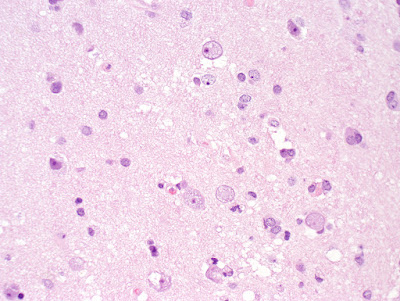 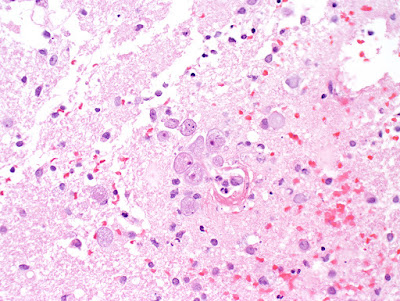 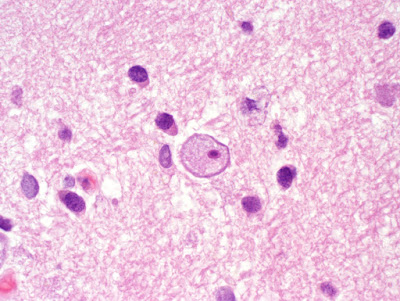 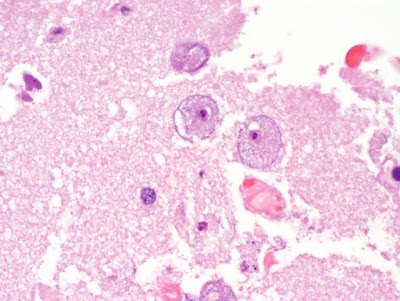 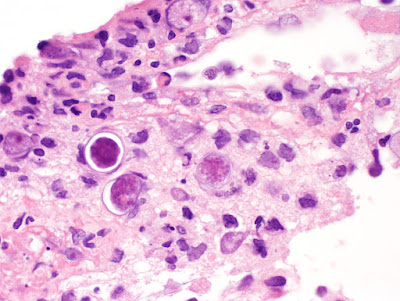 The characteristic features of this case include predominance of organisms around blood vessels (reflecting its hematogenous route of dissemination) and presence of both characteristic cysts and trophozoites. 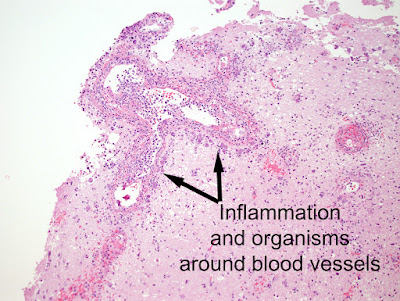 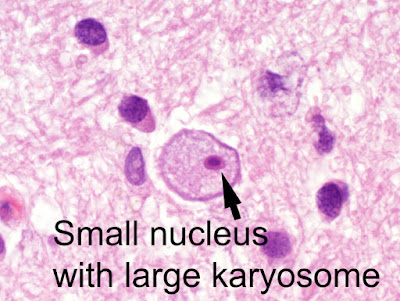 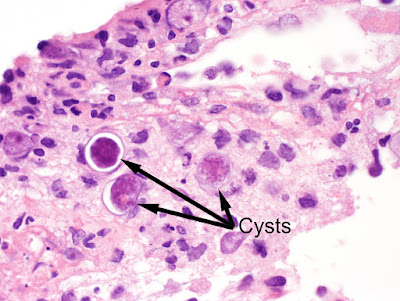 It is not possible to differentiate Acanthamoeba species from B. mandrillaris, and therefore additional testing was performed. This cases tested positive for Balamuthia mandrillaris by both our in-house and CDC's real-time PCR assay for free-living amebae. Dr. Ali at the CDC also confirmed the findings using an indirect immunofluorescence assay. Note how the trophozoites beautifully light up using B. mandrillaris-specific fluorescent-labelled antibodies. 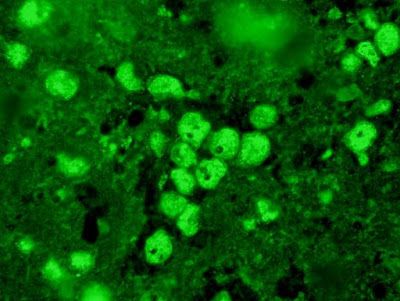 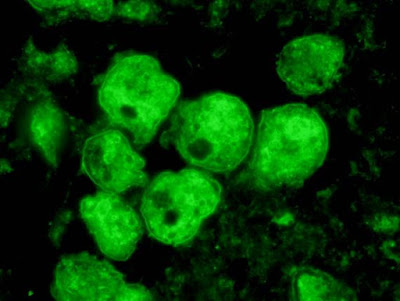 Posted by ParasiteGal at 4:51 PM No comments:

Happy Fourth of July to all of my readers in the U.S.! This week's case is a good reminder to think about food-borne illnesses as you go to picnics and cook-outs on this weekend.

The patient is an adult male with "explosive" watery diarrhea (like fireworks - sorry, bad pun) for the past several days. Round, slightly wrinkled-appearing objects measuring approximately 8-10 micrometers in diameter were seen as negative outlines on routine Trichrome stain: 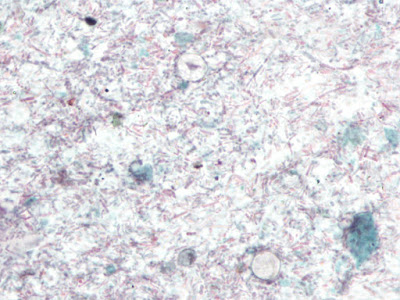 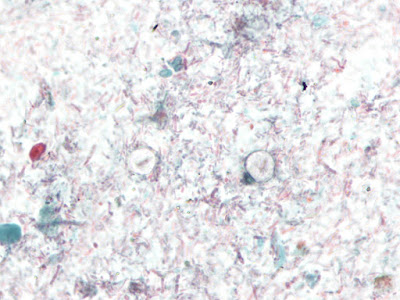 These objects also stained clear to bright pink-red on modified trichrome stain (if you use your imagination, you can say that this slide is red, white and blue): 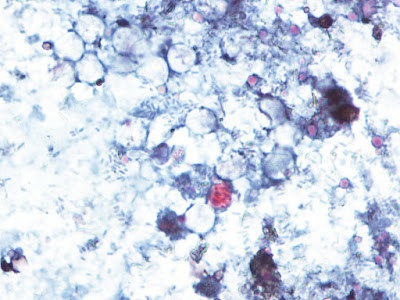 Florida Fan nicely described the diagnostic features of this case:

1. Round non-staining oocysts on Trichrome stain with a wrinkled, "ground glass" appearance
2. Positive staining with modified acid fast stain
3. Larger size (8-10 microns in diameter), distinguishing the oocysts from those of Cryptosporidium species.

Florida Fan mentioned that he has been seeing cases of cyclosporiasis recently in Florida. As a national reference lab, we have also seen a number of cases recently from around the country - upper Midwest, Northeast, and South - thus leading me to think that we have a small outbreak going on. I know that the CDC is currently investigating this possibility, so I anticipate hearing more on this soon!
Posted by ParasiteGal at 9:55 AM 1 comment: