The following eggs are all from the same species. There are typically seen in fecal preparations and measure between 50-80 microns. The last photo was taken with a 40x objective (2.5 measurement conversion), and thus measures 50 microns.

Questions:
1. Identification?
2. Explain the difference between the 3 eggs (i.e. why do they look different even though they are from the same organism)?
CLICK ON THE IMAGES TO ENLARGE 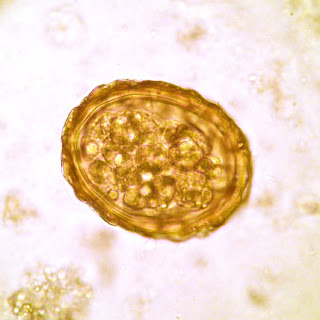 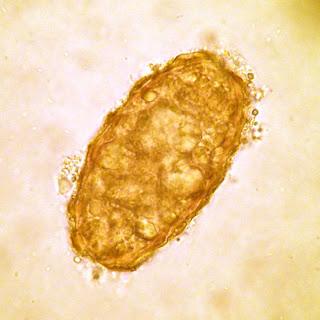 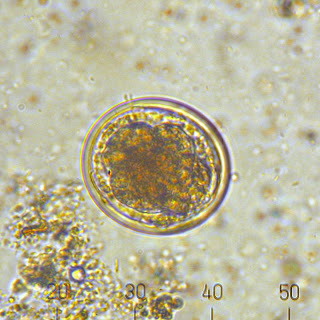 Congratulations to everyone who wrote in - you all got it right.
1. Identification? Ascaris lumbricoides

2. Explain the difference between the 3 eggs (i.e. why do they look different even though they are from the same organism)?
The top egg is fertile.
The middle egg is infertile. Infertile eggs are larger and longer than the fertile eggs, often have a thinner wall, and can take on bizarre shapes.
The bottom egg is decorticated - it has lost it's outer mamillated layer. Importantly, note that it still has it's characteristic thick wall. This allows its differentiation from thin walled hookworm eggs.

As a bonus, here is an extra photograph: The fleshy 'lips'/mouth parts of Ascaris. You'll notice that the mouth does not have any 'teeth', hooklets, or cutting plates. That is because, unlike Strongyloides stercoralis, Trichuris trichiura, the hookworms, and the tapeworms, Ascaris lumbricoides does not attach to the mucosal surface, but lives freely in the gut lumen. 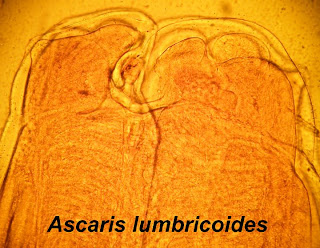 Posted by ParasiteGal at 12:36 PM No comments:

The following eggs were identified from a resected brain lesion. They measure approximately 90 micrometers in length. CLICK ON THE IMAGES TO ENLARGE. 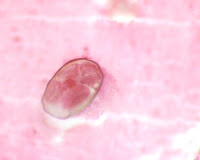 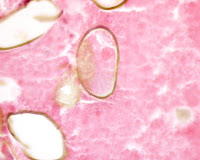 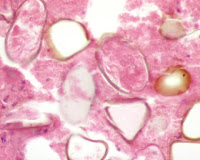 Diagnosis?
Posted by ParasiteGal at 3:23 PM No comments:

This was definitely one of the harder cases I've shown so far. I tried to make it a little easier by telling you the size of the eggs (90 microns) and the location (brain). There are not many eggs that fall into this size range and are known to (rarely) involve the CNS. Schistosoma japonicum would be your main differential diagnosis.

The key to identifying these eggs is by recognizing the shouldered operculum. It is present on at least one egg in each image (shown by arrows). The eggs of Fasciola and Fasciolopsis spp. also have an operculum, but it is not shouldered and is very hard to identify in tissue sections. These eggs would also be larger than 90 microns. Of note, the eggs of S. japonicum are not operculated.

For interest, I also added an image demonstrating the egg contents, and an image where an egg is being ingested by a multinucleated foreign-body type giant cell (essentially a giant macrophage). CLICK ON THE IMAGES TO ENLARGE. 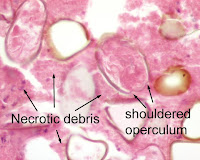 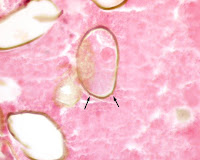 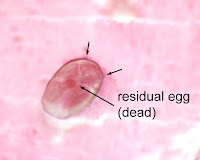 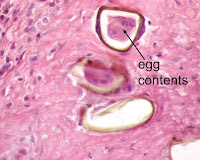 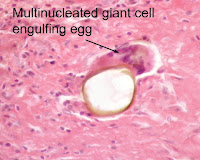 Posted by ParasiteGal at 1:21 PM No comments:

The following egg is found in a human fecal concentration. Without knowing size, what is the most likely diagnosis? Name 3 other possible diagnoses. CLICK ON THE IMAGE TO ENLARGE. 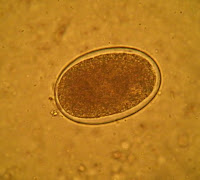 From the answers I received, I think I made this harder than I intended to. While not 'classic', this egg is most diagnostic for human hookworm (either Necator americanus or Ancylostoma duodenale, since they cannot be distinguished morphologically). The germinal mass is usually in the 4-8 cell stage (early cleavage stage), although in this example, it is in an advanced stage and it is harder to make out individual cells. Other distinguishing features include a thin hyaline shell which is rounded at both ends and a germinal mass that mostly fills the egg. Eggs measure approximately 60 x 40 micrometers.

Without being given the size, other eggs with a near identical appearances include:
1. Trichostrongylus spp. - usually the germinal mass is in a more advanced stage than hookworm eggs and does not fill the egg. The egg measures approximately 80 x 40 micrometers, and tapers at one end. It has been reported from humans worldwide.

2. Oesophagostomum spp. - These eggs are indistinguishable from human hookworm eggs, although it is common to find an early larva (L1) within the egg. The most common species, O. bifurcum, is found in Africa in regions where Necator americanus is also highly prevalent. Culture is required to definitely distinguish to two.

3. Ternidens deminutus - This rare nematode is primarily found in South Africa. Eggs are also identical to hookworm eggs, but are slightly larger at 85 x 50 micrometers.

4. Strongyloides stercoralis - I mention this one just for completeness sake, since eggs are not usually seen in feces, and light microscopic diagnosis is based on finding of classic larval forms.

Other diagnostic considerations include vegetable matter and decorticated Ascaris eggs. The former usually have rigid rectangular walls, while the latter have a much thicker shell than hookworm eggs.
Posted by ParasiteGal at 11:00 AM No comments:

This week, I'd like to start with a link to an interesting image and video from the April 3rd edition of the NEJM: http://content.nejm.org/cgi/content/full/358/14/e16

Thank you to Wash for bringing it to my attention. As always, please feel free to send in links, photos, and stories to share with your fellow parasitologists. It's good to hear from you, and a great way to share knowledge.

Now, on to the case:

This photograph was taken by my classmate at the London School of Hygiene and Tropical Medicine. This worm was noted in a section of Cod, purchased in London, England. It was part of an anniversary dinner that she had cooked for her husband. As a good parasitologist, she immediately grabbed her camera and snapped some photos. Unfortunately, her husband was less than pleased and the worm did not make it to the laboratory for definitive diagnosis. However, we can make a presumptive diagnosis based on the size, color, shape of the worm, and it's presence in Cod from the Atlantic Ocean. Any thoughts? CLICK ON IMAGE TO ENLARGE. 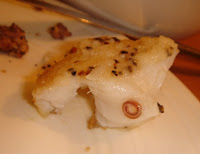 My favorite quote from this case:
"I don't know what this is, but that picture of the cooked cod with the worm in it is. . . . .disturbing."

Most likely identification: Pseudoterranova decipiens. This organism is usually found in cod, giving it the name "cod worm". It is frequently found in the flesh of fish; most commonly the belly flaps.

Another possibility is the "herring worm": members of Anisakis simplex complex, which are found in a variety of fish, including herring.

If the fish (and the worms) are thoroughly cooked, then ingestion will not cause human disease. However, they cause the diner considerable distress if discovered during a meal (like in this case), and thus, the fish handlers take steps to identify and remove parasites prior to sale.
Posted by ParasiteGal at 10:00 AM No comments: