The following were seen on a giemsa-stained thick blood film made from EDTA whole blood. Identification? (CLICK ON IMAGES TO ENLARGE) 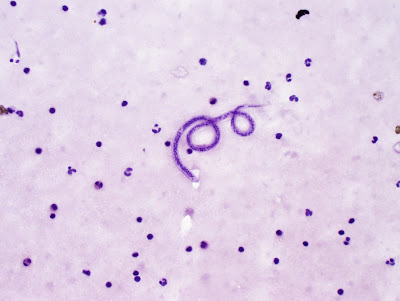 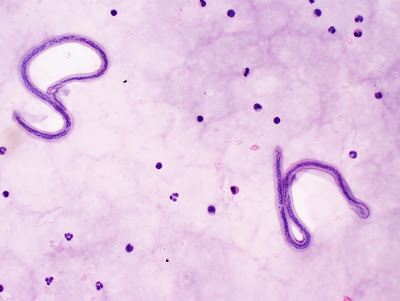 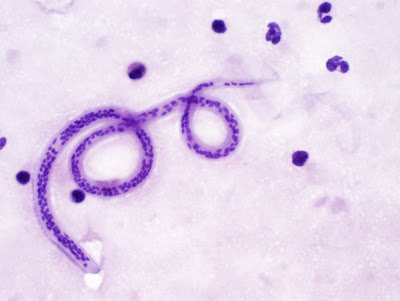 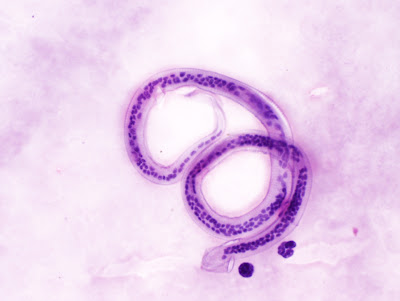 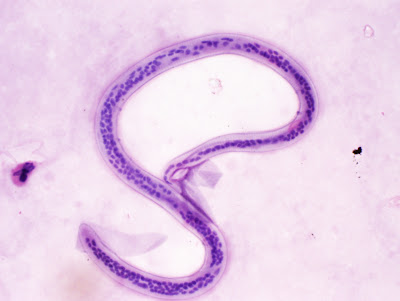 Posted by ParasiteGal at 2:54 PM 8 comments:

The main features that support the diagnosis are:
1. presence of a sheath (faintly staining)
2. nuclei do not extend to the tip of the tail 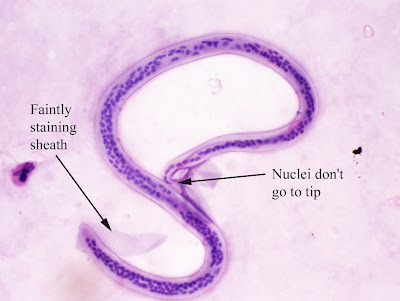 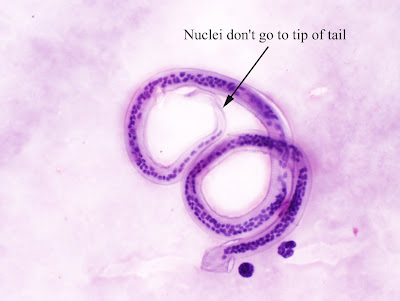 Some viewers commented that this could be Brugia malayi since the sheath stains with giemsa. However, I find this to be a less-reliable feature. More important are the characteristics of the nuclei. The nuclei of B. malayi extend to the tip of the tail, unlike those of W. bancrofti.

Great job on a tough case!
Posted by ParasiteGal at 6:03 PM 1 comment:

The following were seen on an unstained "squash prep" of a diaphragm biopsy. Diagnosis? (CLICK ON IMAGES TO ENLARGE) 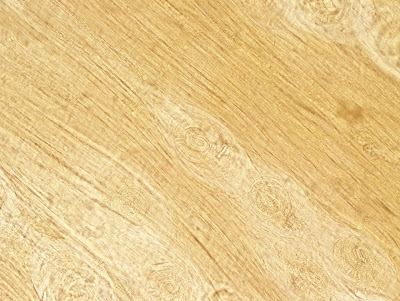 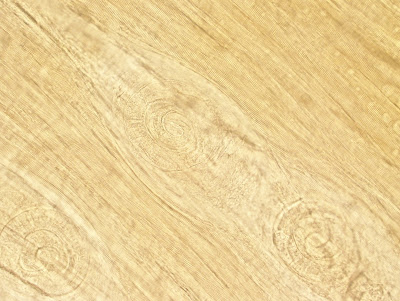 Posted by ParasiteGal at 8:04 AM 4 comments:

Answer: Trichinella spp. Shown here are multiple L1 larvae in skeletal muscle. Note that each larvae is contained within a 'nurse' cell derived from the invaded host myocyte (muscle cell).

There are at least 3 species of Trichinella that infect humans, of which T. spiralis is the most common. T. spiralis has several subspecies, which some may be genetically distinct enough to warrant being a separate species. Larvae of T. pseudospiralis do not encapsulate within a nurse cell, but are otherwise morphologically similar to larvae of T. spiralis. Regardless of the species, the symptoms and prognosis seem to be the same, and are related to the parasite burden in the host (more larvae, worse disease).

Trichinosis (aka trichinellosis and trichiniasis) is classically acquired from ingestion of undercooked pork containing Trichinella spp. larvae; however, bear, horse, and walrus meat are also major sources of infection. After ingestion, the larvae mature in the host intestine and mate. The adult female then releases thousands of first stage (L1) larvae which penetrate the intestine and migrate to skeletal muscle via the blood stream. When the larvae reach skeletal muscle, they penetrate the individual muscle cells and remain coiled up inside the cell until ingested by another carnivore. So each host serves first as a definitive host, and then an intermediate host!

The moral of the story - don't eat undercooked meat.

Thanks for all your comments!
Posted by ParasiteGal at 12:19 PM No comments:

The following structures were seen on Trichrome stained stool ova and parasite examine:
(CLICK ON IMAGES TO ENLARGE) 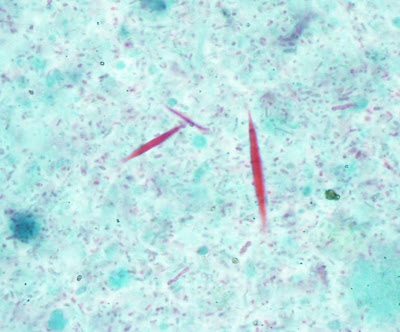 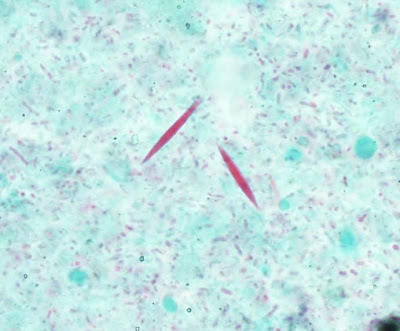 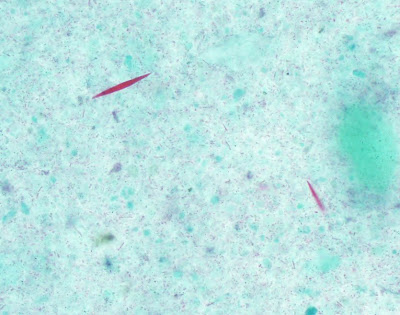 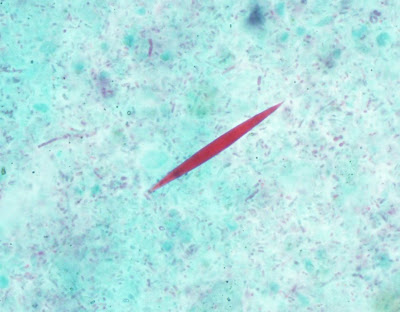 Identification?
What is the significance of finding these structures in stool?
Posted by ParasiteGal at 2:51 PM 4 comments:

Answer: Charcot-Leyden crystals.
I received some very nice comments on this post -

Anonymous (x2), Kathy, and BW from VT all correctly recognized these striking slender crystals. They have a characteristic shape, described as "a pair of hexagonal pyramids joined at their bases", with pointed ends. They are normally colorless, but take on a striking pink-orange color with the commonly used modified trichrome for stool preparations. They also vary in size and may be as large as 50 µm in length.

Charcot-Leyden crystals consist of lysophospholipase, which is an enzyme synthesized by eosinophils. They are produced from the breakdown of these cells, and therefore, are seen in conditions in which eosinophils are common, such as allergic conditions or tissue-invading parasites.
Posted by ParasiteGal at 8:29 PM No comments:

The following was seen on giemsa stained cervical smear. (CLICK ON IMAGE TO ENLARGE) 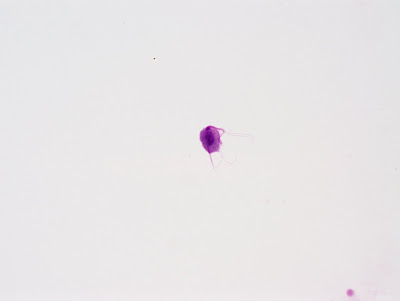 Answer: Trophozoite of Trichomonas vaginalis.
Congratulations to everyone who wrote in - you all got the correct answer!

The main identifying features are the longitudinal axostyle, flagella, and undulating membrane: 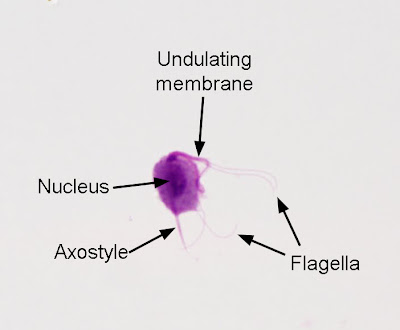 Posted by ParasiteGal at 2:16 PM No comments:

Bladder biopsy from a 28 year old male who immigrated from Kenya 5 years prior and presented with gross hematuria, flank pain, and bladder calcifications on a CT scan.
(CLICK ON IMAGES TO ENLARGE) 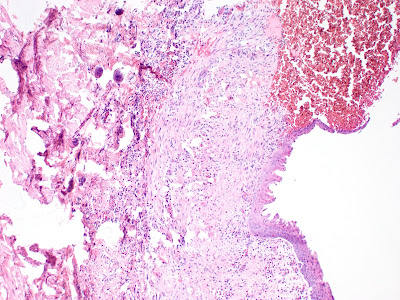 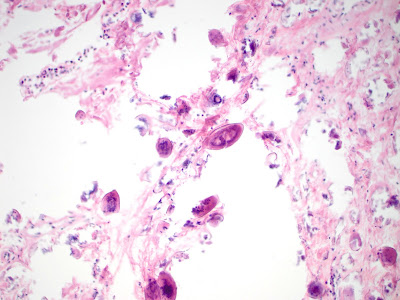 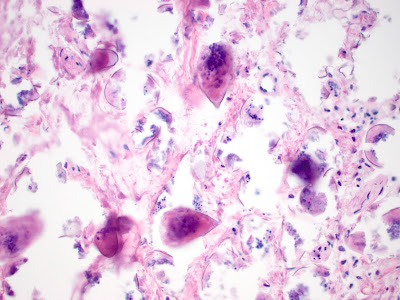 Diagnosis? What is this patient at risk for?

Special thanks to Dr. Bekker from Fletcher Allen Health Care, VT, who donated this case!
Posted by ParasiteGal at 9:40 PM 4 comments:

Urinary schistosomiasis due to Schistosoma hematobium. This patient is at risk for squamous cell carcinoma of the bladder, caused by ongoing squamous metaplasia and inflammation from the eggs present in the bladder wall.

In histologic sections, the eggs are typically seen in various stages of degeneration and calcification. Here, some degenerating nuclei are present within the egg (H&E, 1000x). 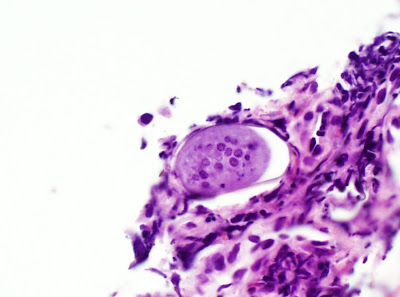 To make a diagnosis to the species level, you need to see a clearly identifiable terminal spine. The spines of these eggs are fairly clear (arrows): 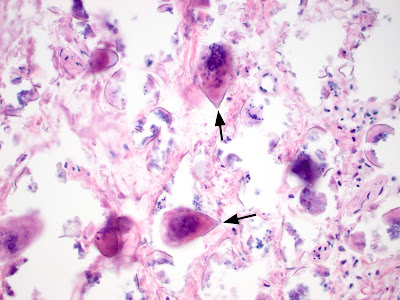 and are even more pronounced in this image from a separate case: 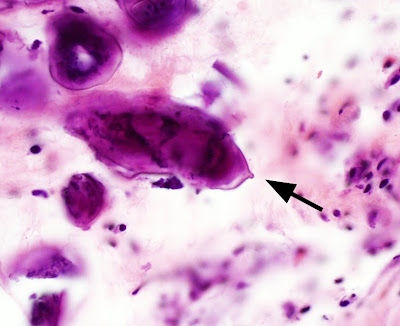 When urinary schistosomiasis is suspected, examination of urine for characteristic eggs is a non-invasive way to make the diagnosis.
Posted by ParasiteGal at 11:48 AM No comments: