The following objects were aspirated through a fine-gauge needle along with fluid from a slowly growing cystic mass. Papanicolaou stain. No further information is available. (CLICK ON IMAGES TO ENLARGE)
Identification? 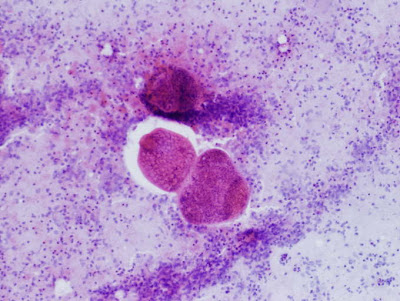 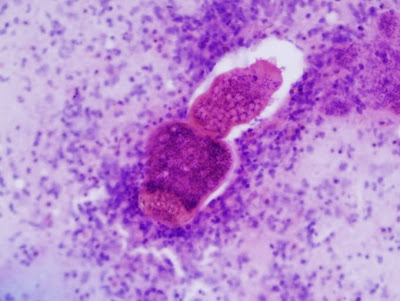 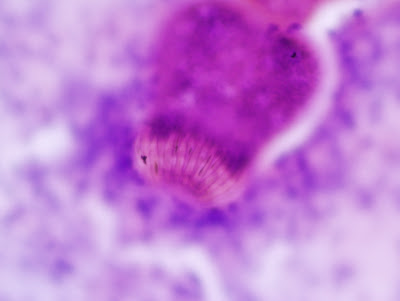 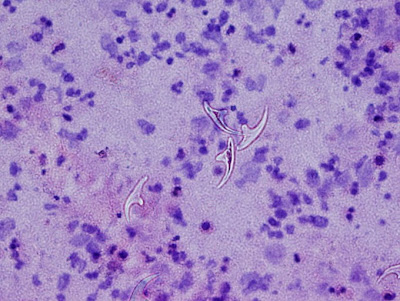 The fact that this is a single cystic mass, and that protoscoleces are present suggests that this is E. granulosus instead of E. multilocularis, but clinical and radiographic correlation is necessary for definitive speciation. E. granulosus typically produces a single, slowly growing cyst, that may eventually contain one or more daughter cysts - each containing protoscoleces (the so called 'cysts within a cyst' appearance) - while E. multilocularis typically produces multiple, rapidly growing cysts that expand in a invasive fashion, and are not constrained by an outer cyst wall. E. multilocularis cysts rarely contain protoscoleces in humans, but are often 'sterile'. These 2 species are the most common to infect humans, but other species rarely infect humans as well.

Thank you all for the great comments on this case! I especially enjoyed "I am hooked on Echinococcus" by Scott and Anonymous.
Posted by ParasiteGal at 8:40 PM No comments: 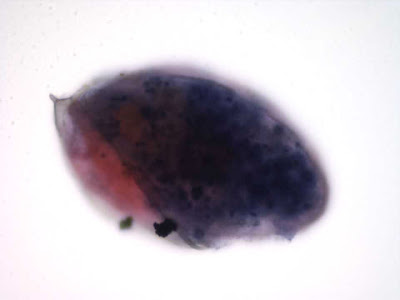 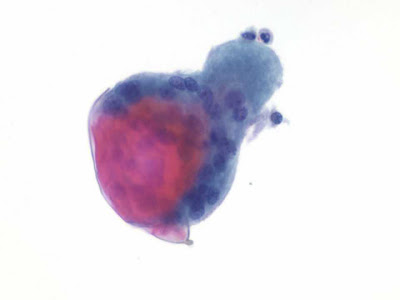 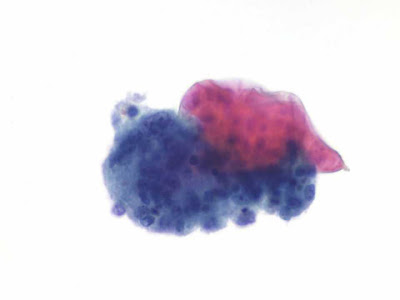 (I'd like to thank Drs. Gladwyn Leiman and Ann Berry for these beautiful images!)
Posted by ParasiteGal at 6:44 PM 2 comments:

Identification:
Schistosoma hematobium egg.
The distinguishing features of this eggs are its large size (>100 microns in length), and characteristic terminal spine. The fact that they are found in urine is another important feature, since these eggs are usually laid around the venus plexus of the bladder, and some eventually make their way through the bladder wall into the urine. 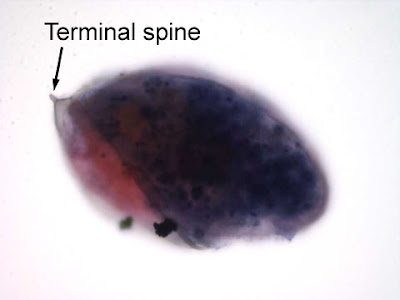 What is striking about this case is the associated inflammatory response. Note here how the egg has been badly damaged by the adherent collection of inflammatory cells. 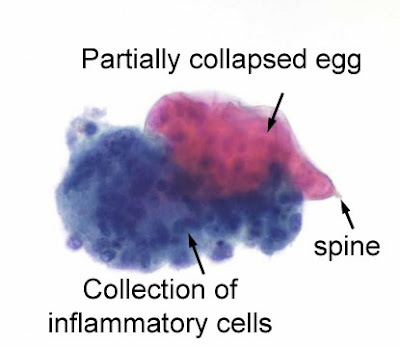 Even more striking is this image of a multinucleated giant cell that is trying to engulf an egg intact! 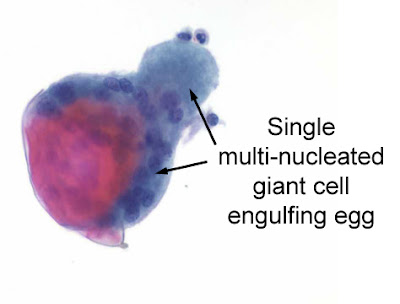 One writer asked why the eggs were stained. This is a good point, since we don't typically stain urine specimens in the microbiology lab. However, this was a specimen that was submitted to cytology and was subjected to Papanicolaou (pap) staining. The eggs are easily identified both with and without staining, but the pap stain nicely highlights the inflammatory response, and makes for some striking images!
Posted by ParasiteGal at 3:27 PM 1 comment:

The following objects were identified from a concentrated wet mount preparation of stool. The patient was originally from China, and has a history of cirrhosis. Identification? 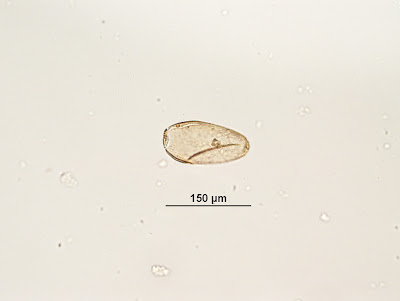 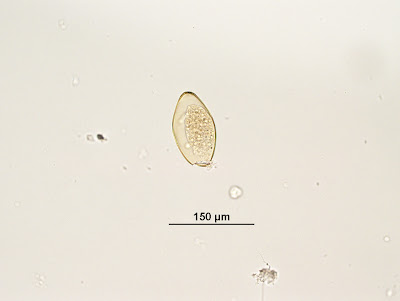 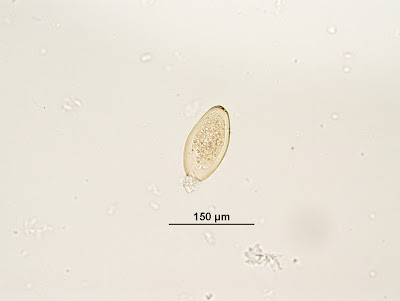 Posted by ParasiteGal at 4:57 PM 7 comments:

Answer: Fasciola hepatica
Congratulations to everyone who wrote in on this case! You all recognized that this egg falls into the category of thin-walled oval operculated eggs, which includes (in increasing size) Clonorchis sinensis, Diphyllobothrium latum, Paragonimus westermani, and Fasciola hepatica/Fasciolopsis buski. I put the last 2 eggs together since they are morphologically indistinguishable - although they are from 2 distinct flukes that inhabit different regions of the body.

There are subtle differences between these 5 eggs, but they can be easily confused for one another. That is why it is essential to MEASURE your eggs using an ocular micrometer so that an accurate identification can be made. Of interest, these 5 eggs are from 4 flukes and 1 cestode. This just shows that there is morphologic overlap between very different phyla of parasitic worms.
Posted by ParasiteGal at 6:26 PM No comments:

The following insect was found in a patient's home in the Northeast U.S. The patient wanted to know if he should be concerned about potential disease transmission.
What is the identify of this insect? What would you tell the patient's physician? 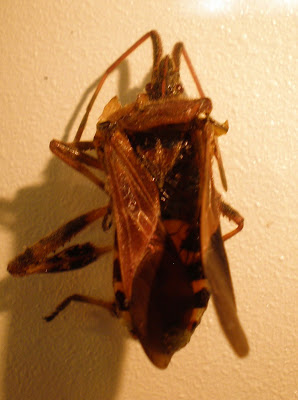 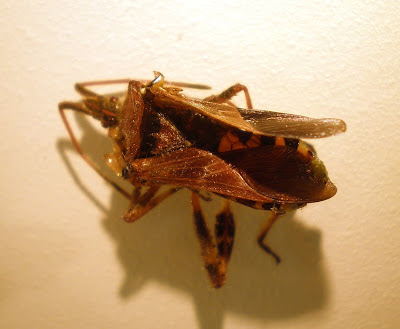 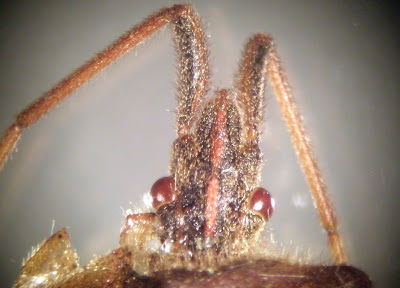 (Note - this is a good example of how insects are submitted to the laboratory for diagnosis. They are rarely in perfect condition!)
Posted by ParasiteGal at 7:21 PM 7 comments:

Answer:
Well, it turns out that this case is much more complicated than I originally thought. I was going to call this a Reduvid bug, from the Reduviidae family, which includes "Assassin" or "kissing" bugs. Assassin bugs are the vectors of Chagas disease (Trypanosoma cruzi). There are over 135 species in North America, but fortunately, Chagas disease is limited to the southern most portion of the U.S., and is primarily in Central and South America.

However, in showing these photographs to my entomology friends, they comment that this bug may be either a Reduvid bug or one of the leaf-footed bugs (family Coreidae), that has approximately 80 species in N. America. Damsel bugs (Family Nabidae) can look similar too, but are usually small (3mm to 1 cm). Since the insect is no longer available for further examination, I'm afraid that the final identification will remain a mystery.

Fortunately, the 2nd part of my question is easier to answer - how you should advise the patient's physician. Regardless of this bug's identification, it is not likely a vector of human disease, unless it had gotten to New York state by stowing away in someone's luggage from a region that is endemic for Chagas disease. Therefore, you can reassure the physician that this bug does not pose a risk to his or her patient.
Posted by ParasiteGal at 9:28 PM 1 comment:

The following object was seen in the stool of a Mexican immigrant and brought to the lab for identification. (CLICK ON IMAGES TO ENLARGE) 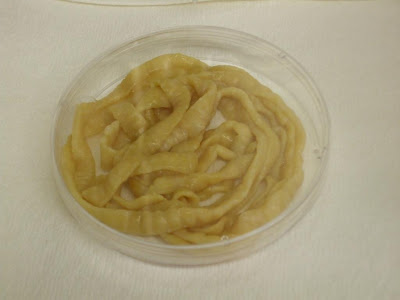 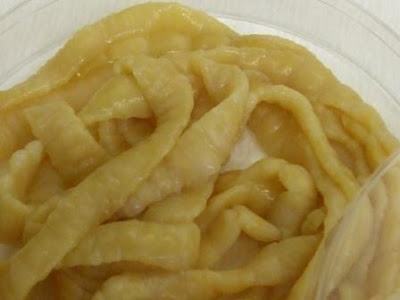 The fluid expressed from the object contained the following: 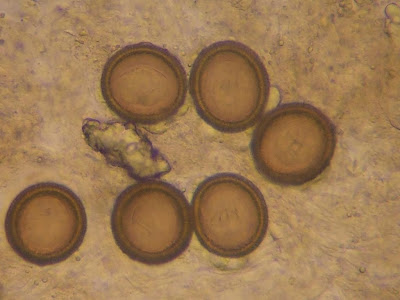 Answer to Case of the Week 91

Answer: Taenia spp. adult tapeworm
Shown here is a long segment of proglottids which had been shed intact in the patient's feces. To confirm the diagnosis, fluid was expressed from the proglottids, and provided the following eggs. Note the thick striated outer wall and inner hooklets, with is classic for Taenia eggs. As a note - If you see hooklets inside a helminth egg, then you know you are dealing with a cestode. 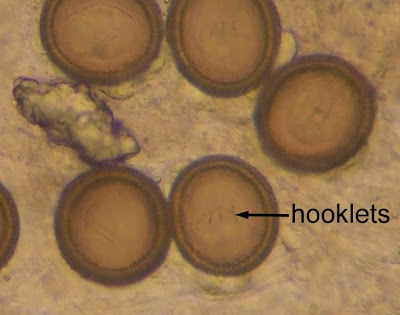 The presence of diagnostic eggs allows for identification to the genus level. However, speciation requires examination of the uterine branches within a mature gravid proglottid (e.g. through india ink injection), or examination of the scolex (if found). In this case, the specimen was submitted in formalin which interfered with our ability to inject india ink into the uterine branches. Since no scolex was found, we were not able to provide definitive speciation in this case.

Salbrent mentions the following important point: "all Taenia eggs and proglottids must be handled with extreme care b/c T solium eggs are infective to humans." This is essential to remember when handling proglottids! Accidental ingestion of T. solium eggs can lead to cysticercosis, where humans serve as the intermediate host of the tapeworm - a much more deadly disease than intestinal infection with the adult tapeworm. Eggs can remain infectious for months, even in fixatives such as ethanol or formalin. So wear gloves whenever handling tapeworm proglottids, and wash hands well afterward.
Posted by ParasiteGal at 10:23 PM No comments: