For this week's case, I thought you might enjoy seeing a 'potpourri of parasites' from a stool concentrate wet preparation.

Which eggs are shown here? 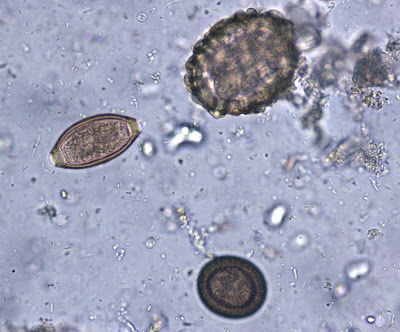 Posted by ParasiteGal at 8:31 AM 5 comments:

Thank you for all of the responses on this case. They were all correct!
Posted by ParasiteGal at 9:31 AM No comments:

The following were incidental findings on seen on intestinal biopsies. Diagnosis? (CLICK ON IMAGES TO ENLARGE)
x20 original magnification 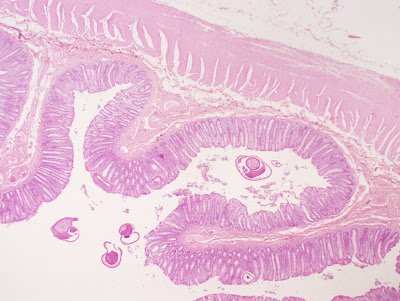 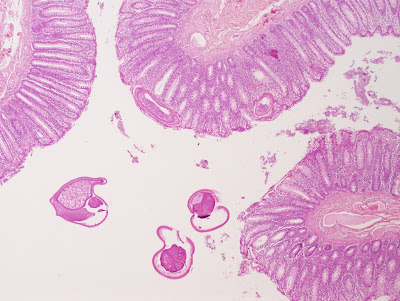 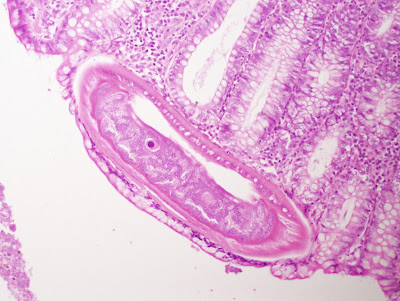 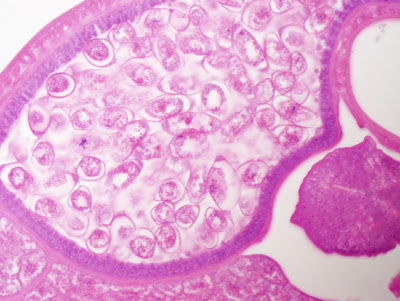 Posted by ParasiteGal at 4:27 PM 3 comments:

Shown in this case are sections of a round worm in the colonic mucosa. The presence of cross-sections within the mucosa raise the possibility of several nematodes, including Strongyloides stercoralis, Capillaria philippinensis, and Trichuris trichiura, with the latter being supported by the presence of free-hanging sections of worm in the intestinal lumen (recall that the smaller head of Trichuris embeds itself into the colonic mucosa (arrows below), leaving the larger body hanging free in the lumen.) (CLICK ON IMAGE TO ENLARGE) However, the defining feature of this case is the characteristic morphology of the eggs within the uterus demonstrating smooth walls and bipolar plugs. 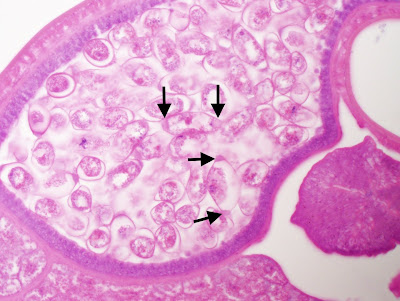 Other features shown in this case are a nice example of a stichocyte with large nucleus and nucleolus and classic polymyarian musculature.

Thanks to everyone who wrote in for this case!
Posted by ParasiteGal at 8:02 AM No comments:

The below photographs are of H&E stained sections from an orchiectomy specimen. The patient is a Californian man with a complaint of "testicular mass." No further history is available. The questions that the referring pathologist has for you are:

1. Is this a worm or some type of artifact?
2. If it is a worm, could it be Strongyloides stercoralis or Toxocara spp.?

What do you think? 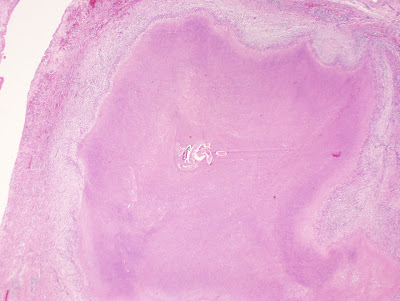 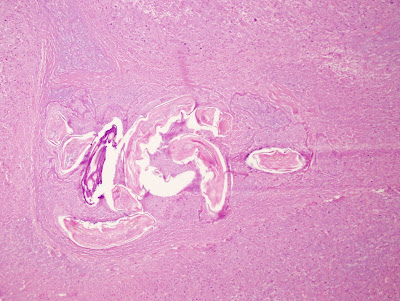 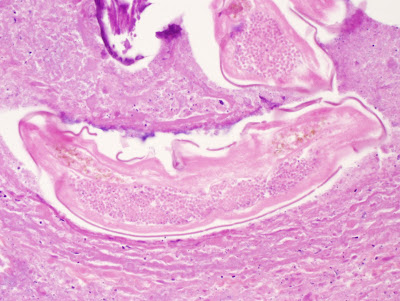 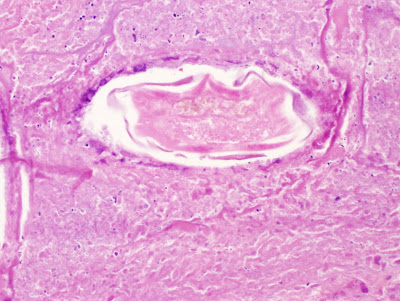 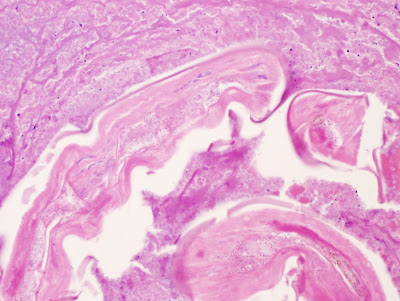 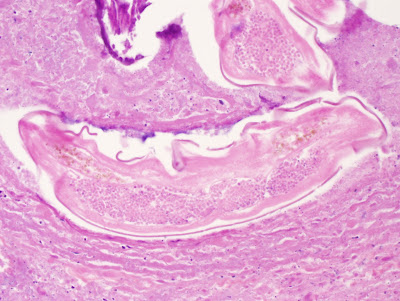 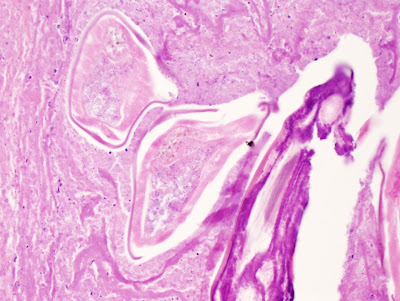 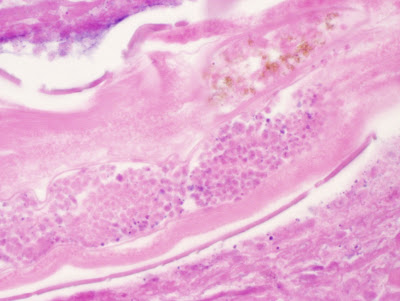 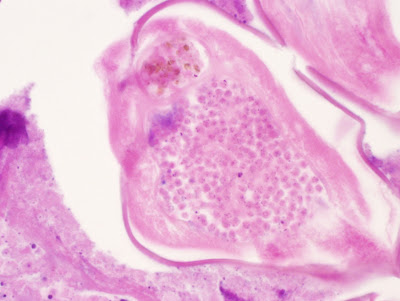 Posted by ParasiteGal at 2:35 PM 4 comments:

Additional history was received after the case was reviewed, which included a travel history to Central and South America. Therefore, W. bancrofti is a strong consideration, and serologic testing would be advised. Peripheral blood films could also be identified for microfilariae, although this particular worm does not appear to be gravid and is also somewhat degenerated, indicating that it is no longer viable. For W. bancrofti, blood for microfilariae examination should be obtained between 10 pm and 2 am when the microfilariae are released into the bloodstream.

Anonymous points out "In Pathoparasitology , the classic atlas by Michael Kenney, he says "except for W.bancrofti and aberrant eggs of schistosomes,no parasites are usually found in the testes". Thought this might help."

I agree - this is very helpful for formulating a differential diagnosis. The diagnosis microscopic features include:
1. coiled appearance on cross section with surrounding fibrosis
2. size/diameter
3. suggestion of a double uterus, consistent with an adult female filarial worm

Many times, microfilariae can also be seen within the uterus, although they were not present in this case.

I would like to thanks the excellent DPDx team who helped confirm my initial diagnosis and expand on the differential diagnosis. They have a very useful web site at http://www.dpd.cdc.gov/DPDx/
Posted by ParasiteGal at 3:16 PM No comments:

This week's case is somewhat challenging.

The following objects were seen on a peripheral blood film from a patient who recently immigrated from Africa. They measure 230-240 micrometers in length. No further history is available.
Identification? (CLICK ON IMAGES TO ENLARGE) 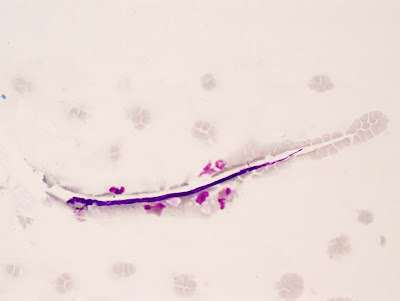 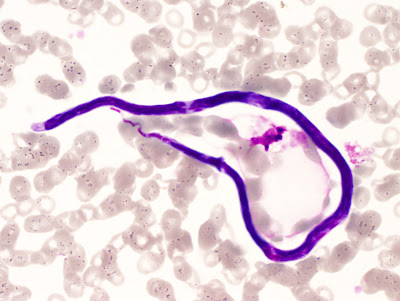 The key features shown in this case are the presence of a non-staining sheath (below), correct size range, and nuclei that extend to the tip of the tail. 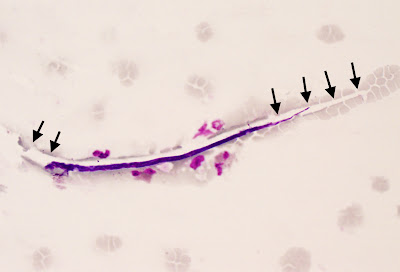 Thanks to everyone who wrote in!
Posted by ParasiteGal at 2:33 PM No comments:

The following is a concentrated stool specimen stained with a modified acid fast stain. The patient had reported to his physician after a week-long bout of diarrhea. He had recently attended an event in which he and other guests had eaten fresh salad. Several of the other guests are also sick. 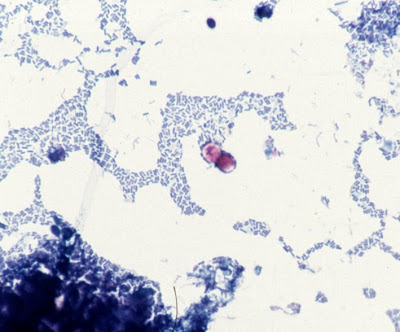 The size, history, and strong acid fast positivity are consistent with a diagnosis of cyclosporiasis. However, one viewer points out that the coccidians are inherently difficult to capture in a single photograph since the cellular features may not be well defined, and that fungal artifacts may still be in the differential. Therefore, I've also included the following wet-prep image showing an oocyst from this same case (CLICK ON IMAGE TO ENLARGE). From this image, the round shape and internal structures can be appreciated. 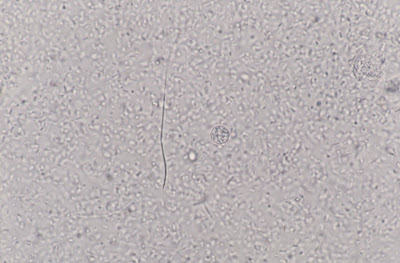 When examining modified acid fast stains, it is also important to note that the size of the stained objects is also important, since Cryptosporidium spp. oocysts have a very similar appearance, but are smaller (4-6 microns in diameter).
Posted by ParasiteGal at 12:17 PM No comments: