Welcome to all of my new readers! I hope you enjoy the parasite case of the week. Please feel free to leave me comments and suggestions. To receive weekly updates, you can subscribe to an RSS feed of this blog (just ask and I'll send you instructions), or request to be added to my weekly email. You can also just check the blog periodically. I update every Monday evening!

Here is this week's case:
The following is an hematoxylin and eosin stained skin biopsy taken from a mission worker who just returned from the Middle East. He presented with a 5 cm, non-healing ulcer. The biopsy shows numerous small (2-3 micron) objects inside macrophages. The arrows point to a defining feature of the organisms. Identification? Note that the organisms are scant, and hard to make out, even under 1000x oil immersion. What type of slide preparation is better for showing the morphology of this parasite? Based on these images, what is your differential diagnosis? And finally, what special stain would help you exclude some of the other possible diagnoses? (CLICK ON IMAGES TO ENLARGE) 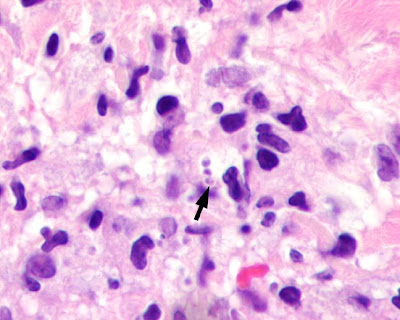 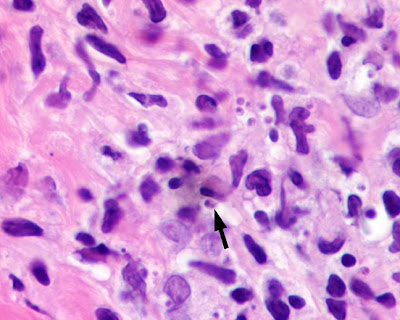 Wow, I can't believe we're up to case 70 already! I've really enjoyed the comments and suggestions from all of my readers.

Here are the answers to this week's case:
Identification?
Leishmaniasis. What is seen is the amastigote stage of this parasite. They live inside of macrophages, and range from 2-5 micrometers in greatest dimension. Therefore, the differential diagnosis includes other small intracellular yeasts such as Histoplasma capsulatum. Also in the differential are Toxoplasma gondii and Trypanosoma cruzi (although both would be unusual in this site). The best way to tell Leishmania apart from yeasts and T. gondii is to identify the rod shaped kinetoplast within each amastigote, in addition to the single nucleus. The arrows in the images point to what is most likely a kinetoplast. Note that it is very hard to see in a formalin-fixed, paraffin-embedded section! The best way to see the characteristic morphology is via a touch prep that is allowed to air dry and is then stained with giemsa (see below). Note that the kinetoplast is much more obvious. 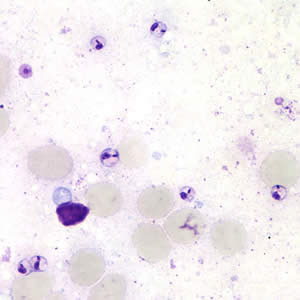 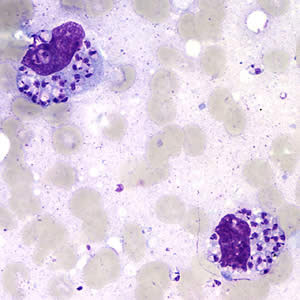 T. cruzi will also appear as clusters of intracellular amastigotes with kinetoplasts. However, T. cruzi will infect any nucleated cell, and is typically found in smooth and cardiac muscle cells. In these cells, the amastigotes occupy a poorly defined pseudocyst, which is typically much larger than the small collection of Leishmania amastigotes in infected macrophages.

A couple of other helpful hints:
1. H. capsulatum has a pseudocapsule (seen as a clearing around each yeast)and no kinetoplast. (arrow head, below image - 1000 times original magnification, oil immersion) 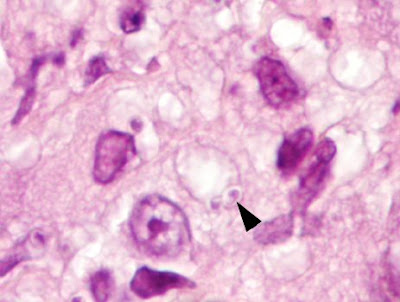 2. T. gondii is typically found in brain tissue (usually with necrosis in acute disease), and rarely, lymph nodes. The organisms have a classic arc shape on touch prep instead of the oval shape of the amastigote.

So what is the best way to differentiate Leishmania from H. capsulatum on formalin fixed tissue sections if you don't have an air-dried touch prep? A silver stain for fungi (e.g. GMS). The former is negative, while the latter is positive. The following is a silver stain performed on this case. The arrow points to a single amastigote, which is clearly NOT staining with GMS (1000 times original magnification, oil immersion). 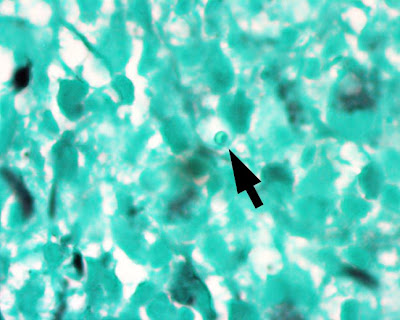 Posted by ParasiteGal at 8:58 PM No comments:

The following were seen under 40x magnification growing on tap water agar, 5 days after inoculation with brain tissue. The patient had a slowly progressive meningoencephalitis. Identification? What stages of this organism are seen in this image? (CLICK ON IMAGES TO ENLARGE). 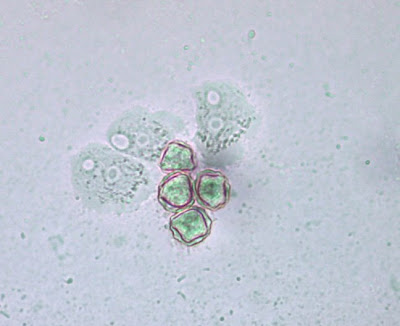 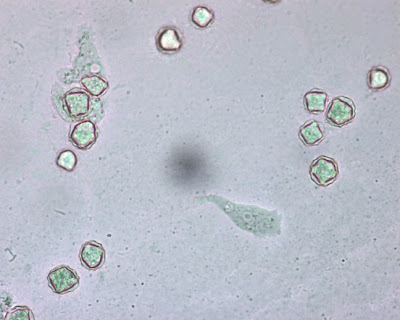 Posted by ParasiteGal at 8:23 PM 3 comments:

Answer: Acanthamoeba species. The arrow points to 4 classic cysts with 2 walls each - a wrinkled outer wall (exocyst) and inner star-shaped or polygonal wall (endocyst). The trophozoites contain a single nucleus with a large karyosome (arrow head). Acanthamoeba spp. and Balamuthia mandrillaris can both show cysts and trophozoites in human infection, but the cysts of B. mandrillaris have a smooth, thick outer wall, unlike the wrinkled or stellate cyst walls of Acanthamoeba. Both are free-living amebae that can rarely cause chronic granulomatous encephalitis in immunocompromised patients. 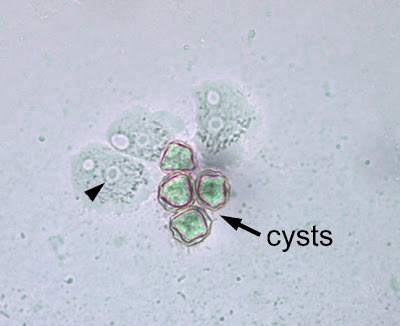 A closely related free-living ameba, Naegleria fowleri, can also infect the human central nervous system, but typically causes a rapidly progressive meningoencephalitis. The typical host is a previously healthy young adult or child. In human disease, only trophozoites are seen. The cysts are not seen in human infection. Naegleria differs from the other two amebae in that it also has a flagellated form in the free-living state. This can be observed in amebic culture by adding tap water. Within hours, the trophozoites convert to flagellates and start swimming!

Thank you for all of your responses to this case. I can tell that I have a group of excellent parasitologists!

Posted by ParasiteGal at 9:46 PM No comments:

The following were seen in a Trichrome stained stool preparation from a patient with bloody diarrhea and abdominal pain. The objects measure 80 um in greatest dimension.
Identification? (CLICK ON IMAGES TO ENLARGE) 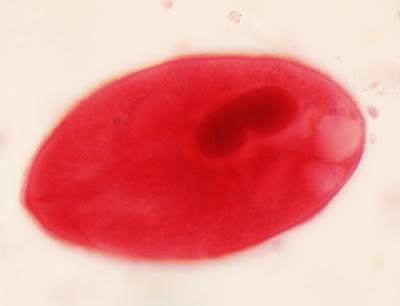 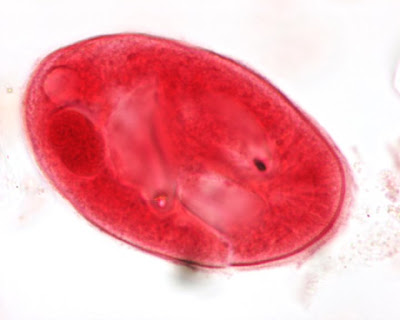 This organism is the only ciliated parasite to infect humans. At 80 microns or larger in longest dimension, it is also the largest protozoan to infect humans. Shown here is the classic ciliated oval trophozoite with 'sausage' or 'kidney bean' shaped nucleus.