Autopsy of an eldery immunocompromised woman with no travel history outside of the U.S. Shown are sections of necrotic large bowel and necrotic luminal material.
Diagnosis? 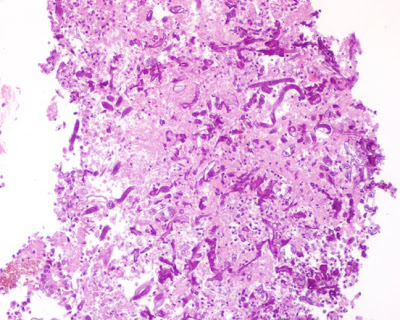 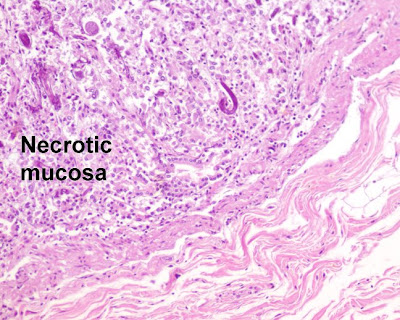 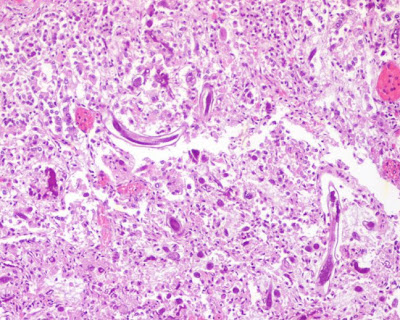 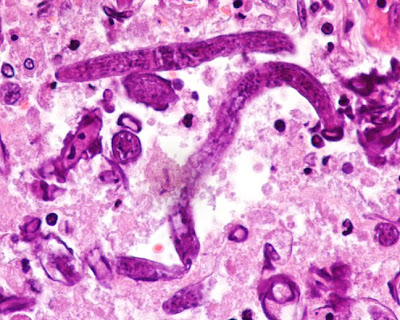 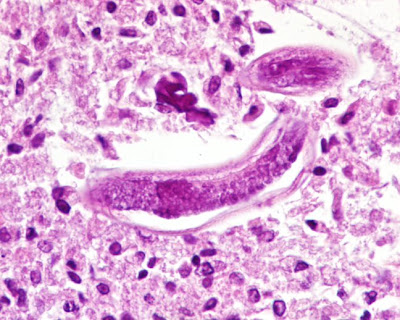 Posted by ParasiteGal at 8:01 PM 2 comments: 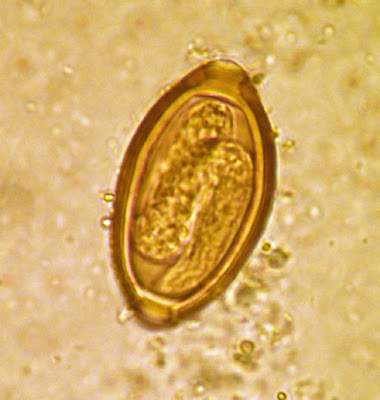 Bonus question - what is the infective form of this organism?
Posted by ParasiteGal at 4:12 PM No comments:

No responses to this one - I guess I made it too easy? This is a beautiful example of a Trichuris trichiura or whipworm egg. Note that it is a mature specimen; the egg has embryonated and there is now an easily visible larva inside. It is unusual to see eggs in this advanced state of development since maturation usually occurs in the soli.

To answer the second question: the infective form is the embryonated egg shown here. It is ingested in fecally contaminated food or water, and the larvae hatch in the small intestine. The adults then take up residence in the cecum and large intestine.
Posted by ParasiteGal at 7:50 AM No comments:

The following was seen in a peripheral blood smear in a traveler from Africa. I don't have a low power view, but these high power images should give you enough to make the diagnosis. (CLICK ON IMAGES TO ENLARGE) 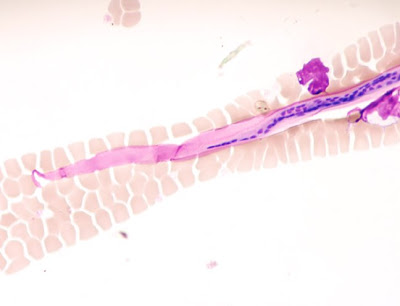 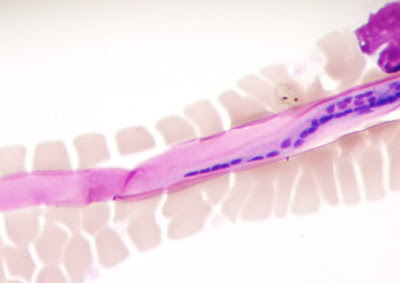 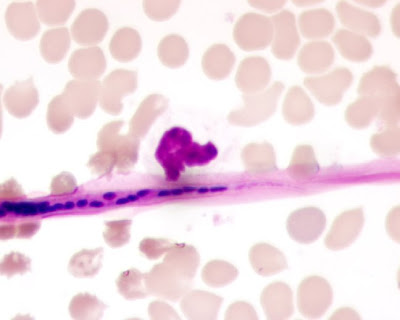 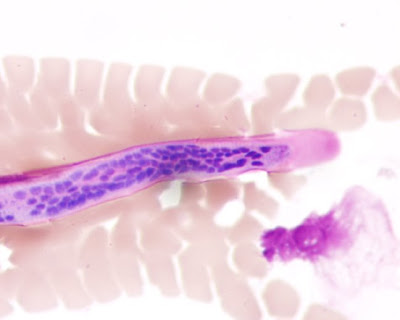 Posted by ParasiteGal at 5:03 PM 3 comments:

Ok, I admit this was a hard case. There are several morphologic features present in these images to point you to an identification; unfortunately, some are conflicting. However, this is a real case and one that initially stumped us in the laboratory as well. Below are the steps I use for speciating microfilariae based on morphologic features:

First, I look for is the presence or absence of a sheath. Only 3 microfilariae have a sheath, so this immediately helps to focus your answer. For those of you that like memory aids, you can remember the 3 sheathed microfilariae by the following phrase: Wears Long Britches. The first letter of each word (W.L.B.) is the first letter of each organism: Wucheria bancrofti, Loa loa, and Brugia spp. Think of the "long britches" as the sheath over the worm's "leg".

If you identify the sheath, then look to see if the sheath stains with giemsa. The sheath of W. bancrofti and L. loa doesn't usually stain, and thus appears as a negative image, while the sheath of Brugia is usually bright pink. The sheaths of the first 2 organisms do stain pink with hematoxylin and eosin, so it's important to know what stain you're looking at (shame on me for neglecting to include this information).

This is where most will get out their atlases and look up the other specifics such as length of the worm, position of nuclei relative to the tail, characteristic of the nuclei and the tail, and the size of the cephalic space. Finally, travel history is essential, since the filarial worms have different geographic distributions.

So for this case, the overall length (approx. 300 microns), presence of a sheath, short cephalic space, and lack of nuclei in the narrow pointed tail indicated that this was W. bancrofti. Furthermore, the patient was from Africa, and had no history of travel to Asia, which would be expected to make a diagnosis of Brugia spp. The only feature that didn't quite fit was the fact that the sheath was stained pink with giemsa. Well, I guess you can't have it all....

Thank you to everyone who wrote in on this case. It just goes to show that real-life is rarely as easy as the textbooks.
Posted by ParasiteGal at 3:20 AM No comments:

The following are touch-preps from a brain biopsy. Identification? (CLICK ON IMAGES TO ENLARGE) 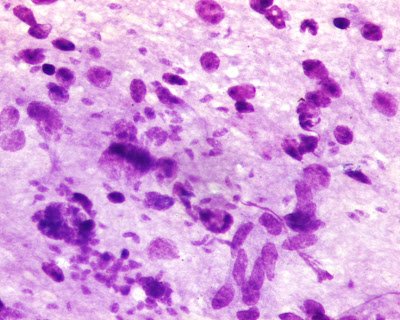 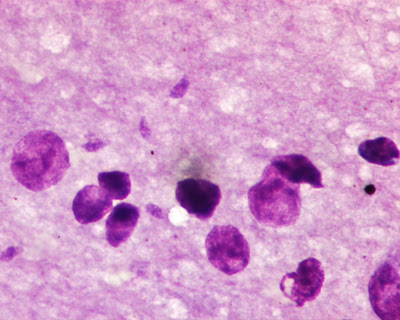 This was a very challenging case since the multiple small objects (the tachyzoites) blended in with the surrounding tissue. However, if you click on the second image (also shown below), you get a larger view where it is easier to make out the organisms. I've added some arrows to highlight 2 of the tachyzoites that have a particularly nice arc shape. (CLICK ON THE IMAGE TO ENLARGE) 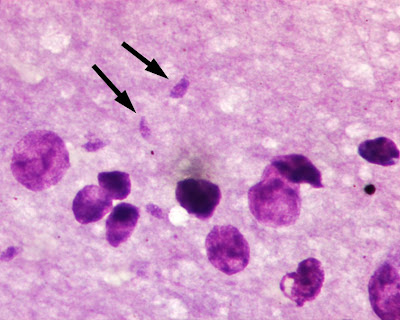 I posted this case because it is what you may expect to see in real life. When available, the clinical history, serology and radiology can help support the diagnosis. Thanks to everyone who was brave enough to write in on this case!
Posted by ParasiteGal at 4:00 PM No comments: