This week's case was kindly donated by Monica Jarvis and Liliana Arias. The patient is a young child who lives on a family farm. The mother noticed "worms" in the child's stool and submitted them to the laboratory for identification. 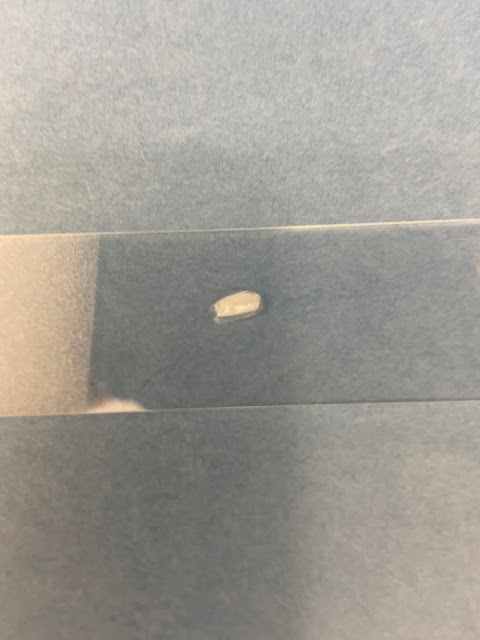 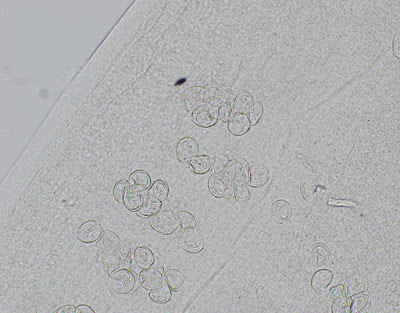 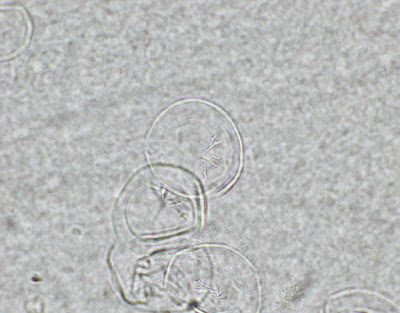 Answer to Parasite Case of the Week 582: Dipylidium caninum proglottid and eggs.
Note the beautiful egg packets, with each egg containing a 6-hooked oncosphere: 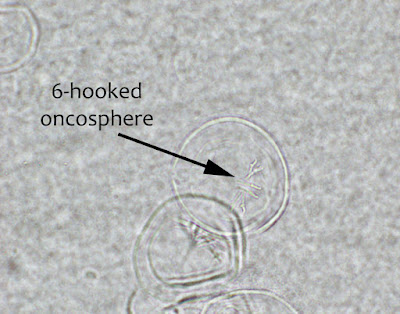 As Old One reminds us, when dealing with a D. caninum infection don't forget to treat your pets and possibly premises for fleas!
Posted by ParasiteGal at 9:56 PM No comments:

This week's case was donated by Theodore Trejo. The following were seen in skin scrapings collected from a middle-aged man complaining of itching. The motile objects measure approximately 0.3 mm in length. Identification? 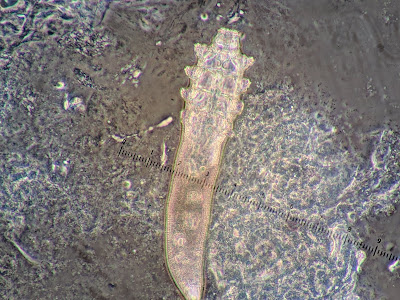 View on full-screen for best visibility:

Answer to Parasite Case of the Week 581: Demodex folliculorum, the human follicle mite.

Demodex are fascinating arthropods that live in our follicles and sebaceous glands. There are 2 species found in humans: D. folliculorum and the shorter D. brevis. Many of us have them - especially as we get older - and they are mostly commensals, not causing any symptoms. However, they may cause rosacea and blepharitis (inflammation of the eyelids) in some individuals.

As with all arachnids, they have 8 legs as nymphs and adults, and 6 legs as larvae. Adults have a genital opening right below the legs, which allow them to be distinguished from nymphs: 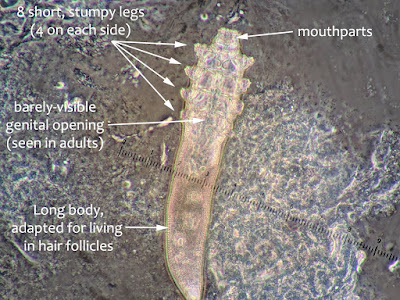 The video from this case shows how many mites can live in a single follicle. Kosta Y. Mumcuoglu noted that there are at least 6 specimens of D. folliculorum present, with at least two of them embedded in the follicle. By viewing the video on full screen mode, I think there may even be more - up to 8 based on the movement I see within the follicle. Wow!

Thanks again to Theodore Trejo for donating this very nice case. I'll close with the fun poem from Old One:

with controversy. We have only to thank Herr Dr. Jake Henie
Who discovered this mini monster dwelling within Thee
Posted by ParasiteGal at 9:51 AM 1 comment:

This week's case was donated by Dr. Neil Anderson. The following objects were seen in an EDTA blood specimen obtained from a patient with recent travel to sub-Saharan Africa (note that the blood was ~10 days old when the video was taken). 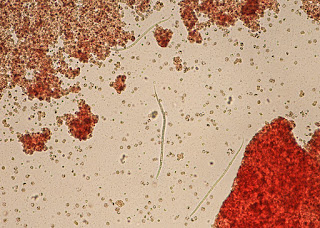 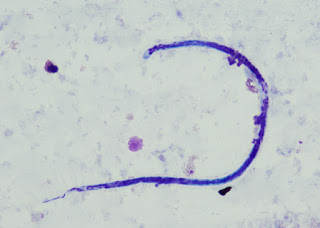 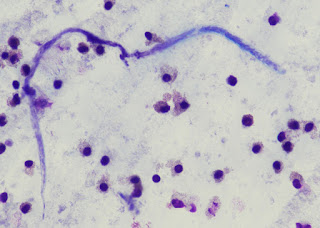 Answer to Parasite Case of the Week 580: Loa loa microfilariae. As noted by several readers, the nuclei go to the tip of the tail, the microfilariae are relatively large, and there is faint evidence of a sheath, all of which are characteristic features for this species. As I teach my students, the nuclei "flow-a flow-a" (to the tip) in Loa loa. Another memory trick from William Sears is that the nuclei go "lower and lower" in Loa loa. Take your pick for your favorite! Remember that the sheath will not always be seen. Size is a more definitive feature in differentiating Mansonella spp. from the sheathed microfilariae.

William also mentioned that one should always check for the presence of Onchocerca volvulus co-infection, and get a microfilariae count before initiating therapy with the drug of choice for loiasis, diethylcarbamazine (DEC). In this case, the microfilaremia was calculated at 1,960 microfilariae/mL blood, which is well below the threshold of 8,000/mL at which DEC is contraindicated (thank you for calculating this Heather, and for the lovely photos in this case). DEC is also contraindicated in patients with concomitant onchocerciasis since the rapid death of O. volvulus microfilariae in the eye can lead to blindness.

What I found remarkable about this case was how long the microfilariae remained alive. They were still moving (albeit, somewhat choppily) at 10 days after blood draw, and the following image was taken of a smear make with 14 day-old blood. Not bad! According to filariasis expert, Shelly Michalski, the Project Liaison for the NIH Filariasis Research Reagent Resource Center, microfilariae are remarkably hardy, and can survive freezing -80°C. Wow! 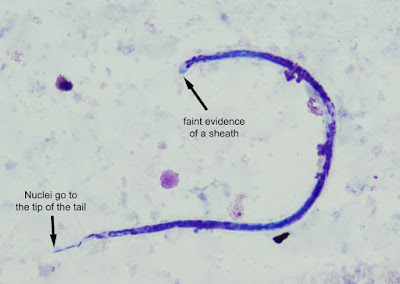 And finally, to celebrate Valentine's day, here is this beautiful Brugia from Blaine Mathison: 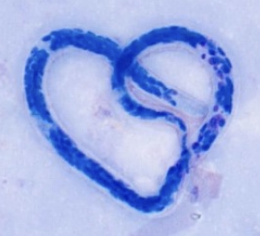 Posted by ParasiteGal at 5:53 PM No comments:

Here is our monthly case from Idzi Potters and the Institute of Tropical Medicine, Antwerp. The following were seen in a direct wet preparation of an unfixed stool specimen from a patient with bloody diarrhea and recent travel to sub-Saharan Africa. The objects in question measure approximately 20 micrometers long. Identification? 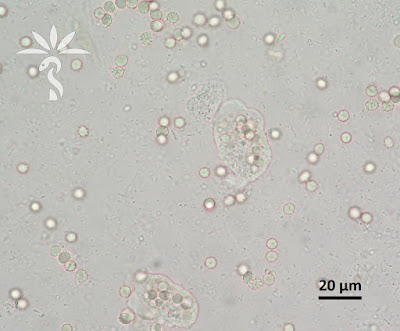 Answer to Parasite Case of the Week 579: Entamoeba histolytica

This great case by Idzi nicely shows the directional motility of an E. histolytica trophozoite - something that is less commonly seen in the clinical laboratory as more fecal specimens are received in a fixative. This case also highlights the characteristic ingestion of red blood cells (erythrophagocytosis) by the trophozoites. 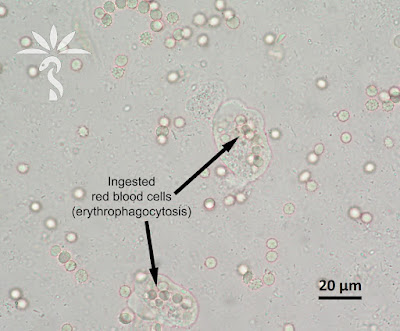 Dr. Graham Clark reminds us that non-pathogenic Entamoeba species may also ingest red blood cells that are in the environment, so correlation with clinical presentation, biopsy, antigen and/or PCR tests is also warranted.
Posted by ParasiteGal at 10:26 AM 2 comments: