This week's case has been generously donated by Blaine Mathison at ARUP. Two different types of objects were seen in a trichrome-stained stool specimen that was screened by a digital slide image and machine learning platform. How did it do? Did it find real parasites?

The following objects are approximately 8 to 13 micrometers in diameter: 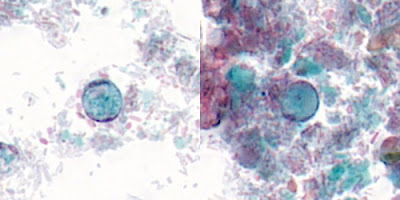 These objects are 10 to 15 micrometers in greatest dimension. 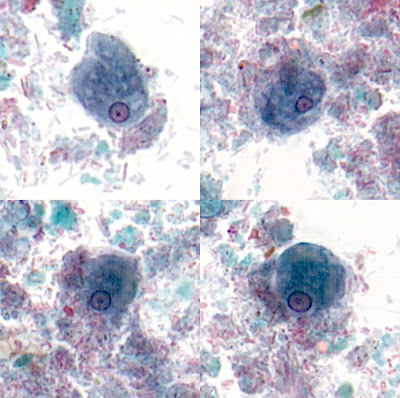 From Blaine: These images were captured by software trained to detect intestinal protozoa in trichrome-stained stool specimens. The final report was Entamoeba histolytica/E. dispar and Blastocystis sp. It is difficult to determine the species of Entamoeba from only four examplars, but the even peripheral chromatin and discrete karyosome are supportive of E. histolytica/E. dispar which is how this case was signed out from both the slides and the whole-slide scanned image. I see a lot of respondents placing weight on the cytoplasm, which I always take as a ‘soft’ feature – I prefer peripheral chromatin.

The software we are training (still in validation stage) is designed to detect Entamoeba based on the nucleus (the amorphic forms of trophozoites created too many false positives when we tried to detect the entire organism). The software is not designed (at least at the moment) to identify the Entamoeba to the species level. All slides flagged as positive with a high score of being positive are to be manually backread for confirmation and species-level ID. The software is more of a screening tool, in hopes of cutting down manual read of 70% of our negative trichromes.

So to those who questions if artificial intelligence is going to make parasitologists obsolete - the answer is "no"! Dr. Marc Courturier assures us in his comment: "Have no fear. We will all have jobs as expert parasitologists. This technology that Blaine and I have been working on will make our work MUCH easier, faster, and more accurate. And fun...because lets face it...no one likes sitting for 8 hours at a scope.The future is bright for parasitology."

Thanks again to Blaine (and Marc) for donating this case!

This week's case was donated by Dr. David Pritchard. The following worm was noted in the toilet of a patient with an extensive international travel history. Likely identification?

Answer: Not a human parasite: earthworm (Phylum Annelida, subclass Oligochaeta, Family Lumbricidae). It could very well be a Lumbricus species as some readers suggested, but I don't know enough about the different genera of earthworms to tell you for sure. Perhaps a knowledgeable reader can educate us on this topic?

So, wow, I've been on a roll with these parasite mimics! I'll try my best to include some true parasites in upcoming posts. Those of you who have followed this blog for a while probably know that I am fond of mimics - probably because they are so commonly seen in the clinical microbiology lab and provide an interesting challenge to clinicians, patients and laboratorians alike. In this case, I'm sure the patient wouldn't have hesitated to identify this object as an earthworm if it had been in a bait and tackle shop. It's when mimics end up in unfamilar settings (i.e., the toilet bowel) that they become a cause for alarm.

So how did this earthworm end up in the toilet? My plumber friend tells me that this is not an uncommon occurrence since pipes break due to the wear and tear of being in the ground. Tree roots, it would seem, are the enemy of sewage pipes.

For those of you wondering how to tell an earthworm apart from other large worms (e.g., Ascaris lumbricoides), here are some of the defining features that are not seen in human parasites:
1. Clitellum - the thickened glandular non-segmented portion of the earthworm's body found in sexually-mature adults.
2. Segmented body with setae. Setae are the small bristles found on each segment that help the worm move through soil.
3. A mucin-secreting epithelial layer beneath a thin cuticle. This is best appreciated on histopathologic exam; you can see a nice example in my previous CASE 234. 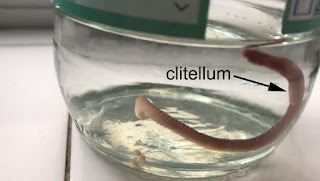 With that, I'll leave you with an interesting 'conversation' between two of our faithful readers, Old One and Florida Fan:

And here is a poem from Blaine Mathison:
To see a worm wiggling in a toilet bowl
would certainly on anyone take its toll
but there's nothing to fear
for it didn't come out your rear
but a crack in your pipes allowed contamination from the soil!

For those of you who would like a more serious poem (with no offense to Blaine's), Florida Fan and Sir Galahad remind us of the poem by Jacques Roubaud, "Le lombric" (the Earthworm). You can find a passable translation HERE. Enjoy!
Posted by ParasiteGal at 7:52 PM 1 comment:

This week's case features an interesting finding in a concentrated stool specimen. The photos are from my awesome technical specialist, Heather Arguello. The individual structures are approximately 25  micrometers in length, while the longer tubular structure is 330 micrometers long. 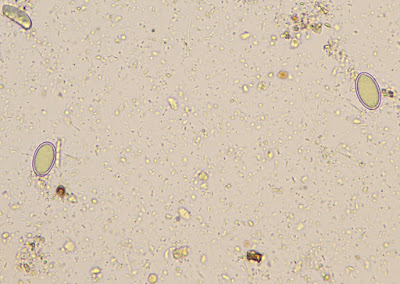 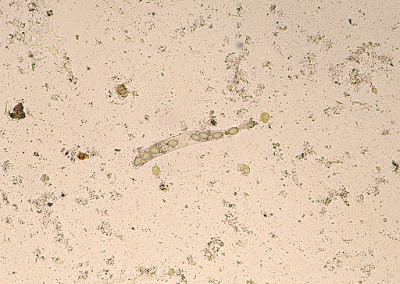 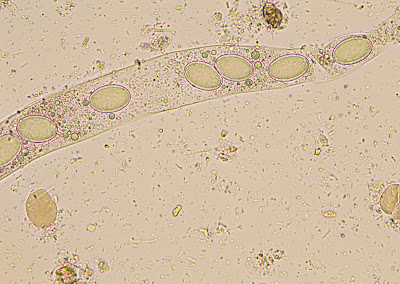 Answer to Parasite Case of the Week 544: Ascus with ascospores (presumed mushroom) spores. Interestingly, it is morel season in many parts of the United States, and these appear to be a perfect match to morel ascospores! 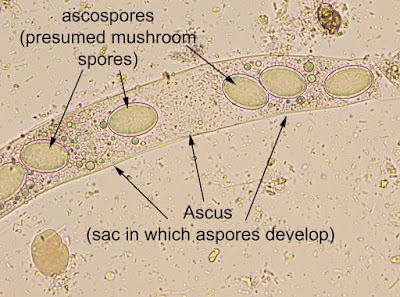 While we commonly see mushroom spores in stool specimens (and have to differentiate them from  helminth eggs), and intact ascus (a sac in which the spores of ascomycete fungi develop) is rarely seen. Thanks again to my lead tech Heather who took the time to snap a photo of this cool finding!
Posted by ParasiteGal at 6:28 PM 1 comment:

This week we are featuring our monthly case from Idzi Potters and the Institute of Tropical Medicine, Antwerp.

The patient is a 15 year old boy returning from swimming camp, who presents with several-day history of profuse watery diarrhea. A stool specimen was submitted for parasite examination, and multiple small (3-6 µm), round structures were identified. The following photos are taken after: 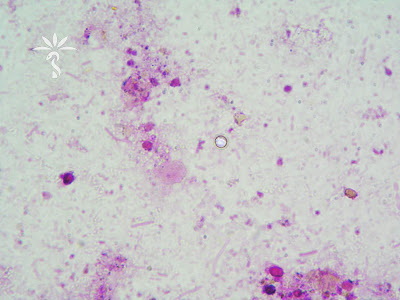 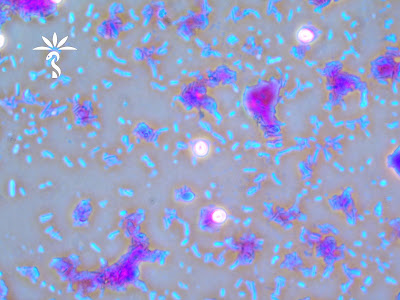 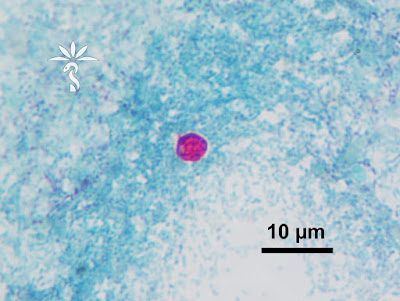 Identification?
Posted by ParasiteGal at 8:24 AM 10 comments:

Answer to Parasite Case of the Week 543: Cryptosporidium sp. oocysts

The case shows how Cryptosporidium oocysts look in a variety of different preparations including phase contrast (very cool). As we are all taught during training, Cryptosporidium spp. oocysts are red-pink using a modified acid fast stain (as shown in image 3 of this case) and measure 4-6 micrometers in diameter, thus allowing their differentiation from the similarly-appearing Cyclospora cayetanensis oocysts (which are 8-10 micrometers in diameter). Florida Fan reminded us that not all of the oocysts will reliably stain with the modified acid fast stain, and thus some may appear as 'ghost' cells or negative outlines. A modified safranin stain can also be used and has been reported to more reliably stain the oocysts.

Florida Fan mentioned that the direct fluorescent antibody (DFA) for Cryptosporidium spp. oocysts - widely regarded as the most specific microscopic method - doesn't necessarily detect all Cryptosporidium species, and thus there is the potential false negative results. In certain cases, confirmation with another method may be helpful.

Finally, Old One tells a tale of prior infection in our case comments that he thankfully survived! It is indeed possible that his prior infection stimulated development of a protective immune response - likely an interferon-gamma mediated memory T cell response. However, it is not clear if this immune response would prevent future infections with all different species of Cryptosporidium.

Thanks again to Idzi for sharing this beautiful and classic case!
Posted by ParasiteGal at 9:59 AM 2 comments: