A 53 year old male presented with signs of meningitis including severe headache, nausea, vomiting, and neck stiffness.  This later progressed to seizures, neurologic abnormalities, and coma. Examination of the CSF showed elevated opening pressure, elevated protein, and eosinophilia.  The patient expired and an autopsy was performed.  The following are H&E stained sections of brain.  What is your differential diagnosis? (CLICK ON IMAGES TO ENLARGE) 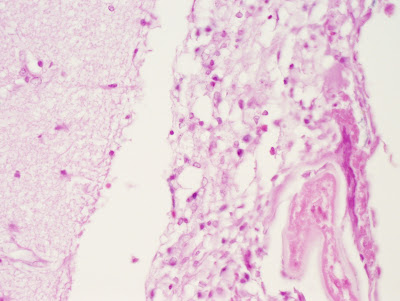 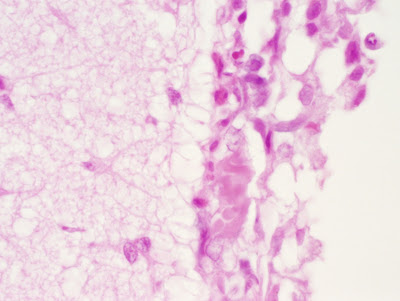 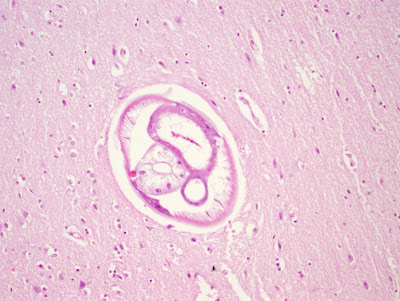 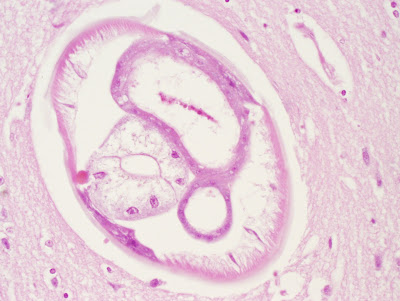 Posted by ParasiteGal at 8:32 PM 6 comments:

All the respondents did a great job on getting the correct answer on this challenging case.

As nicely stated by B.A.M, the identification can be made by the presence of a "syncytial, nucleated intestine, lateral chords (a bit flat in this case), smooth, thin cuticle, polymyarian musculature, and lack of alae (seen in Toxocara). Looks like an immature female, non-gravid reproductive tube present. This species rarely develops to sexual maturity in the human host." 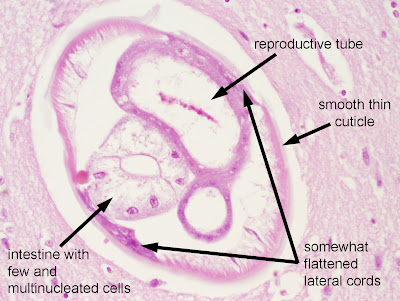 Also in the differential is Gnathostoma species, which would be differentiated from Angiostrongylus cantonensis by its distinct morphologic features, including voluminous lateral cords.

In these cases, it is very helpful to have a travel and exposure history. However, as MicrobeMan said, "Perhaps the patient does have history of travel that we just don't know about."  In this case, no further history was available.

Vspyder points out that "A. cantonensis is the most common cause of eosinophilic menhingitis in asia and the south pacific" while Matthew Rollosson mentions that this parasite has also been found in Australia, some areas of Africa, the Caribbean, Hawaii and Louisiana.  See the CDC general information site and DPDx web site for more details.

Thanks to all of my readers for their comments!

The following peripheral blood film is from an asplenic individual with a recent history of babesiosis.  How would interpret this film?  Are there any additional stains that would aid in your interpretation? (1000 times original magnification; Giemsa) 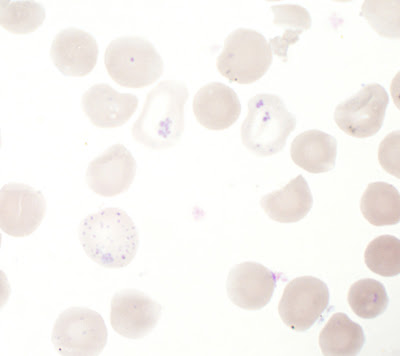 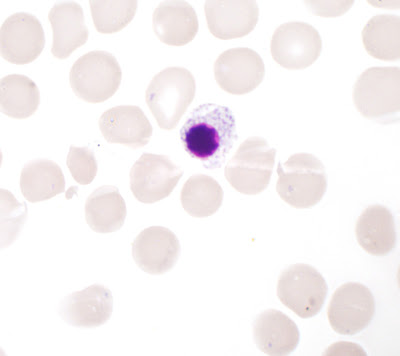 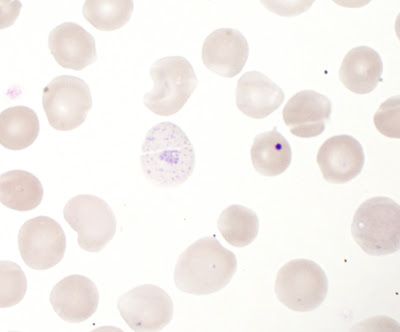 Answer:  No parasites present.  A nucleated red blood cell, reticulocytes, and Howell-Jolly and Pappenheimer bodies are shown.  These findings are consistent with the patient's known asplenia and are no cause for concern.  Because the Pappenheimer bodies can be confused with intra-erythrocytic parasites, it is sometimes useful to perform an iron stain on a peripheral blood film.  Pappenheimer bodies will stain strongly positive (bright blue) while the parasites will not. 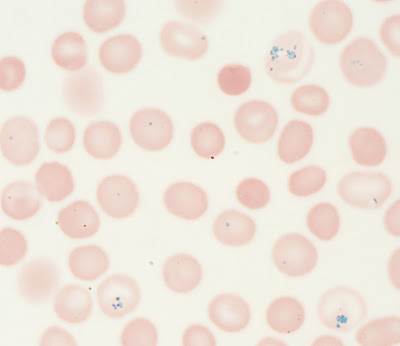 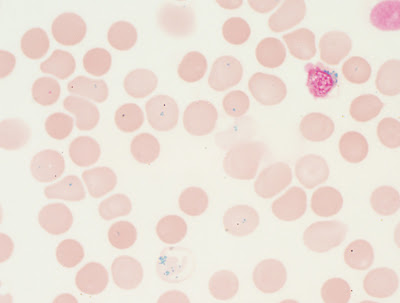 Howell-Jolly bodies may also be mistaken for intra-erythrocytic parasites but can be differentiated by their large round dark blue-purple shape with lack of accompanying cytoplasm.  See this Previous Case of the Week for an example of Howell-Jolly bodies.
Posted by ParasiteGal at 7:59 PM No comments:

The following was passed in the stool of an otherwise asymptomatic patient. 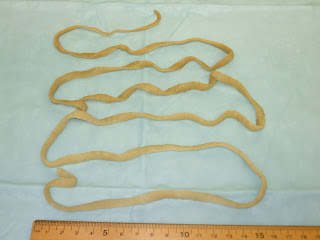 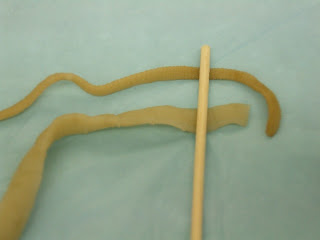 Representative portions of the specimen were cleared using Euparal and pressed between 2 glass slides to show the following: 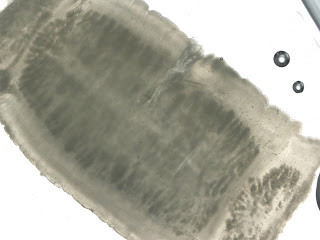 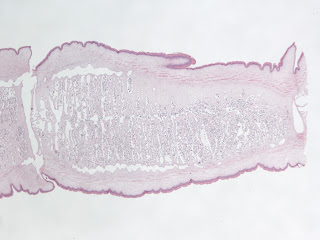 Finally, the following was expressed from the fresh specimen. 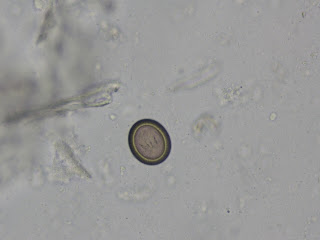 Posted by ParasiteGal at 9:37 PM 8 comments:

This case demonstrates numerous features of Taenia species, including gravid proglottids that are longer than they are wide (compared to proglottids of Diphyllobothrium latum which are wider than they are long), lateral uterine branches originating from a central uterine stem, and round to oval eggs with internal hooklets and radial wall striations.  As mentioned by Anonymous, "The eggs of T.saginata and T solium are not distinguishable from each other."  This also holds true for the gross appearance of the proglottids.

Instead, differentiation of the human Taenia species is accomplished by:
1.  Examining the features of the scolex (which is usually not present in the specimen unless obtained after anti-helminth administration) AND/OR
2.  Examining the number of primary lateral uterine branches in a gravid proglottid.  As some mentioned, T. solium has less than 13 primary lateral uterine branches while T. saginata and T. asciata have greater than 13-15 primary lateral uterine branches.  Determining the number of branches is traditionally accomplished by clearing the proglottid in lactophenol or another chemical and/or injecting India ink in the proglottids.  The branches are then counted from a single side of the uterine stem (not both sides), being sure to count only the primary branches (right as they come off of the central stem) and not the terminal branches.

The preparation shown here was created by clearing a gravid proglottid in Euparal essence. We also attempted to clear the proglottids in lactophenol but the results were not as good.  After clearing, the proglottid was simply pressed between 2 glass slides, using Euparal Mounting Media as a permanent and flexible mountant.  In my lab, we try to avoid India ink injection, given that this requires a considerable amount of proglottid manipulation which potentially increases the risk of exposure to Taenia eggs.  Recall that ingestion of Taenia solium eggs may result in cysticercosis.

In addition to pressing the proglottids between 2 slides, we also sent a proglottid for histologic sectioning.  The section shown here nicely highlights the presence of >15 primary lateral uterine branches.  We don't typically use histologic sectioning in my lab, but it is useful as a back-up or confirmatory method.

Finally, as anonymous points out, T. asiatica should also be considered in this case since it has the same number of primary lateral uterine branches as T. saginata.  It is only by molecular analysis or examination of the scolex that the 2 can be differentiated.  The distribution of Taenia asiatica is limited to Asia and is seen mostly in Thailand, Korea, China, Indonesia and Taiwan.
Posted by ParasiteGal at 10:09 AM No comments:

To my regular readers:  this case of the week is part of a medical school curriculum and therefore I will not provide the option to leave comments (I can't have anyone giving the answer away!).


Live from New York!
The following arthropods were submitted to the lab for identification: 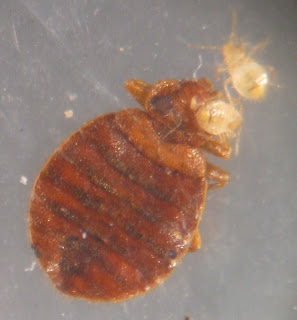 Identification?  Mayo Medical Students, please answer the question that goes with this case on blackboard.
thanks!

The following was submitted in ethanol from an 18 month old child.  No history or source is given.  The object is extremely firm and somewhat pliant, but can be broken apart (see below).  How would you sign this case out?  Possible diagnosis? 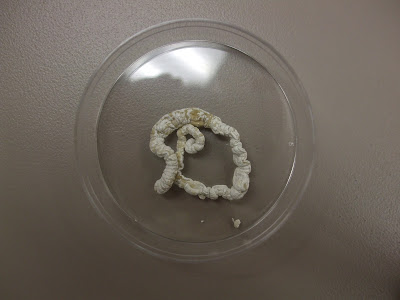 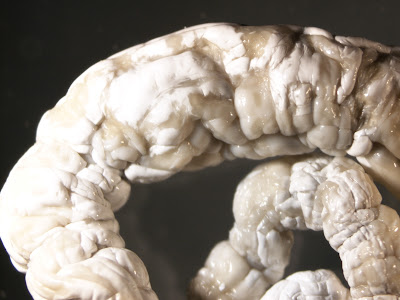 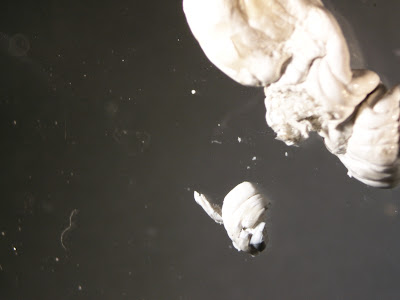 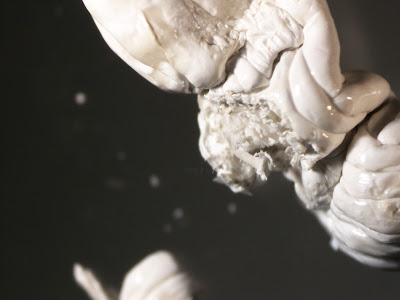 How I would sign this case out:  Not a human Parasite
My best guess at what this is:  chewing gum.  Unusual, yes, in an 18 month old, but we don't know the full story, and we all know how kids like to sample their environment by tasting...

Thanks for all of your comments! (you too G.P.)
Posted by ParasiteGal at 9:37 PM 1 comment: