This week's case is from Dr. Kamran Kadkhoda. The following object was found in the diaper of 3 year old child. It measures approximately 30 cm in length. Identification? 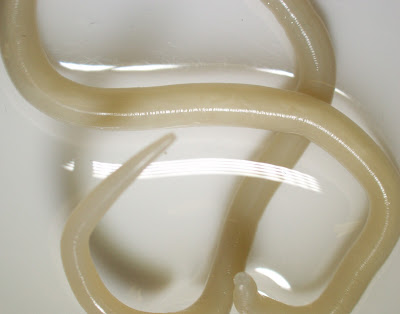 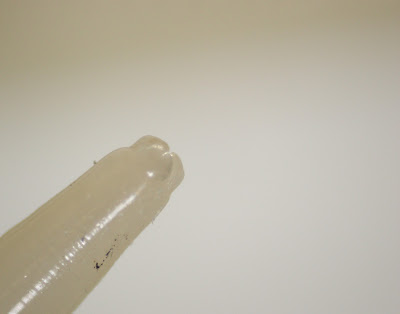 Posted by ParasiteGal at 7:59 AM 8 comments:

The identification of this roundworm is based on its large size, tapered head and characteristic trilobate (3) "lips": 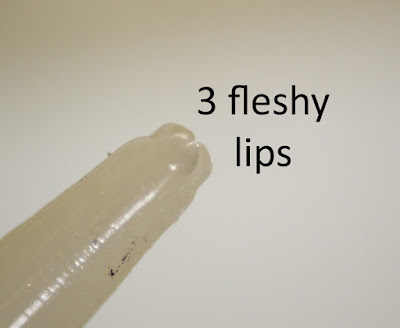 This worm can be further identified as a female based on its straight rather than coiled tail. Ali also astutely noted the presence of a "vulvar waist" - a narrowing at the junction on the anterior and middle thirds of the body, which also indicates that it is a female. Kamran was unable to express any eggs out of the worm; if found, the presence of eggs would also have confirmed the female gender. The size (30 cm) falls within the range of both male and female worms and therefore unfortunately cannot be used to identify the gender in this case.

Thanks to all of my readers for the excellent comments!
Posted by ParasiteGal at 8:15 PM 1 comment:

This week's case was generously donated by our long time contributor, Florida Fan. The following were noted in the stool of a apparently healthy man with no known travel history. The eosin wet mounts were photographed using the 40x objective, while the trichrome-stained slides were photographed using 100x. We don't make eosin saline mounts in my laboratory anymore; I had forgotten how pretty they can be. 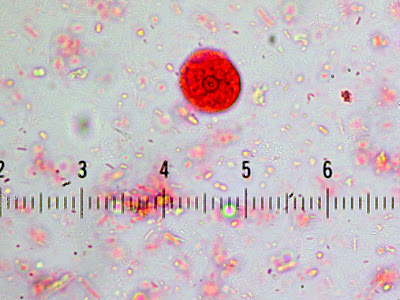 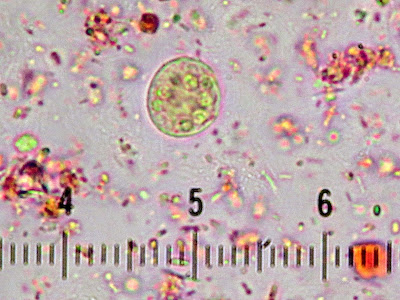 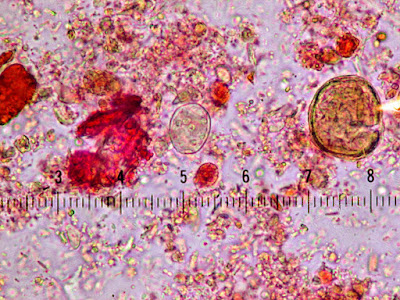 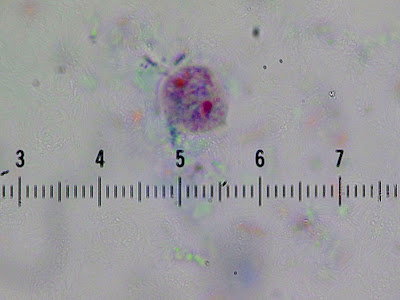 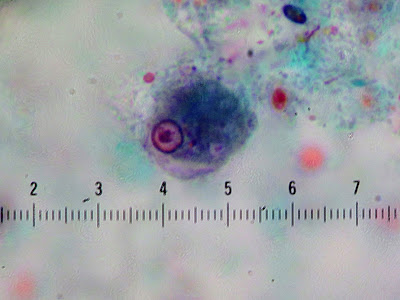 This case from Florida Fan nicely shows the diagnostic features of E. coli, including the large size and >4 nuclei in the mature cyst stage: 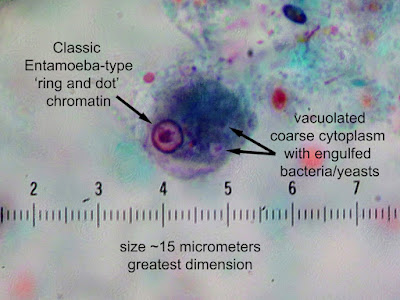 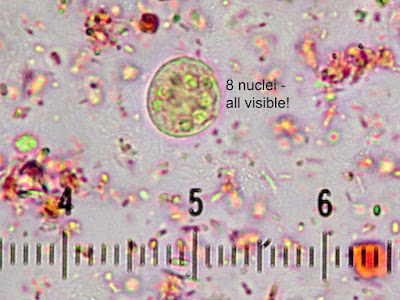 Again, the colors of the trichrome and eosin saline mounts are beautiful.

As I mentioned above, there was also a D. fragilis trophozoite present. Because of its small size and indistinct chromatin features, this organism is significantly more difficult to identify. Here is the current case (bottom, left), as well as an idealized photo from my own collection (bottom, right). Note that the trophozoites have 1 to 2 nuclei with a 'fragmented' or 'fractured' chromatin pattern. The chromatin may also have a smudgy appearance. 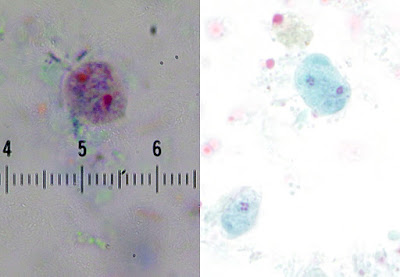 Thanks again to Florida Fan for donating this case!
Posted by ParasiteGal at 9:16 AM No comments:

This week's case was generously donated by Dr. Piryanka Uprety and the excellent Clinical Microbiology and Hematology Laboratories at the University of Pennsylvania. The following structures were initially observed by a hematology fellow in a wet mount (40X) from a BAL specimen. Photographs and videos are courtesy of Joyce Richardson, Vivian Whitener, and Darrin Jengehino from the Hematology Laboratory.

Wet preparation of the BAL fluid with iodine showed the following: 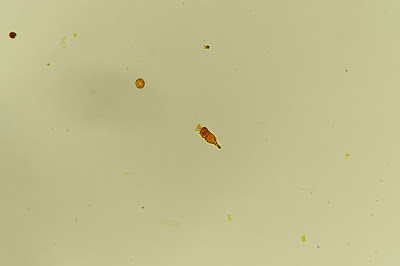 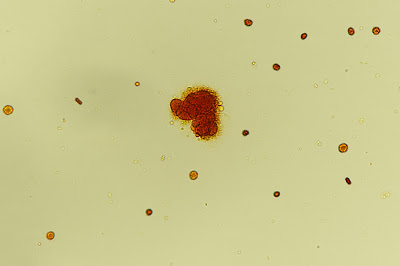 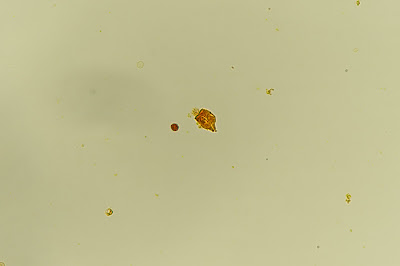 Answer: ciliated respiratory epithelial cells. These are a common parasite mimic, especially when seen in unfixed wet preparations, since the cilia remain motility for quite some time after being exfoliated from the respiratory mucosa. It is important to note that these are NOT parasites. Unfortunately there are several reports where these are misidentified as Lophomonas blattarum; however, L blattarum is a parasite found in various arthropods and is NOT thought to be a human parasite.

You can easily identify ciliated epithelial cells by their small size and characteristic shape. Note that the cilia are present in a dense band at the apical surface: 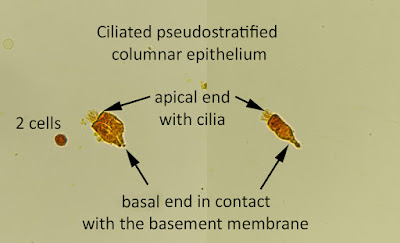 You can really appreciate the columnar shape of the cells in this case.

It can be even more challenging when the ciliary tufts become detached (called detached ciliary tufts/DCTs or ciliocytophthoria). I've featured this multiple times on my blog in the past and have described how to differentiate ciliated host cells from other microorganisms. Check out these past posts for more information:

Thank you all for writing in!
Posted by ParasiteGal at 7:21 PM No comments:

This week's case is a worm that was found near the anogenital region of a young child while she was being bathed by her mother. The child is asymptomatic. 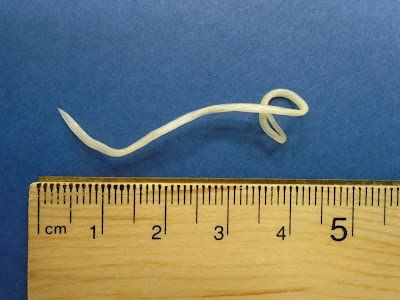 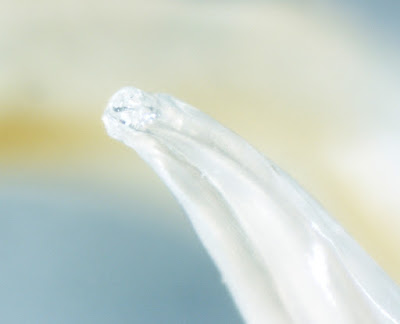 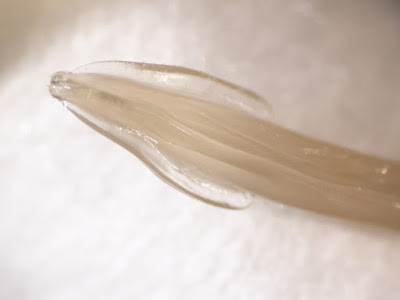 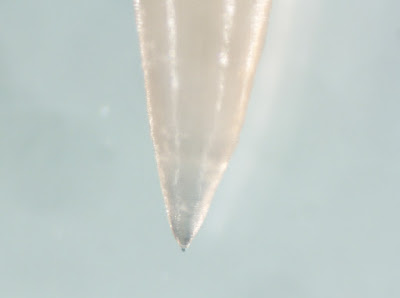 Identification? What is the potential significance of this finding?

Answer: Adult Toxocara cati; the presence of this adult worm represents either environmental contamination (e.g. from an infected cat) or spurious passage by the child.

This case generated an excellent, entertaining, and somewhat disturbing (!) discussion. As many of you correctly noted, this is an adult Toxocara species. It has a similar appearance to Ascaris lumbricoides, but can be differentiated by the presence of the pronounced short, wide cervical alae: 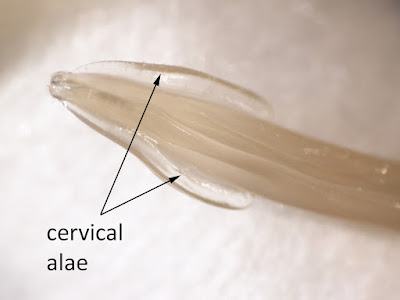 The shape of the alae allow it to be differentiated from other Toxocara species. Note that the alae narrow towards that anterior end, giving the appearance of an arrow (image by my excellent parasitology technologist, Emily Fernholz).

Humans are not a definitive host, but can acquire infection with the larval form of the worm when accidentally ingesting eggs in contaminated soil or infected paratenic hosts. The larvae cannot mature in humans, but can migrate throughout the body causing a potentially serious condition called visceral larva migrans.

So how did this adult worm end up in a human host? Well, we can't really say for sure that it actually was IN this patient since it was noted outside of the body during bathing. Therefore it could have been expelled by family cat and simply ended up in the bathtub.

Alternatively, it could be that the child had ingested an adult or immature worm from the environment (the term kitty spaghetti will stick with me forever! See the comments for more information) and it had passed through her intestinal tract and was expelled intact. Authors from the US CDC published a interesting series of cases like this in 1998. You can read the article HERE.

Regardless of the scenario, it is clear that there is an infected household cat that needs to be treated. As I mentioned above, eggs that are shed from infected cats can mature in the environment and pose an infectious risk to humans (i.e. visceral larva migrans).

Thank you all for excellent comments!

Posted by ParasiteGal at 5:50 PM No comments:

Happy New Year! This week's case is by Idzi Potters and the Institute of Tropical Medicine Antwerp. The following were seen in an unfixed stool specimen at 400X original magnification. (Hint: maximize the size of the video for best viewing). Identification?