The following was submitted for identification to the parasitology laboratory. It was found on a patient's leg and the clinician queried myiasis, although there was no apparent wound in the patient's skin. What should you tell the concerned physician? 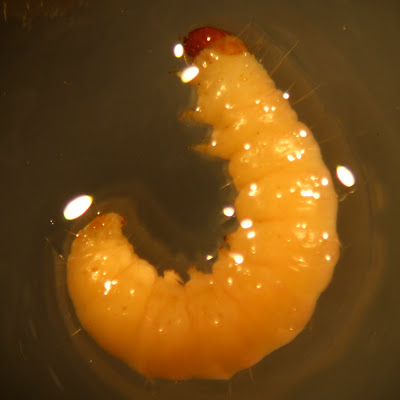 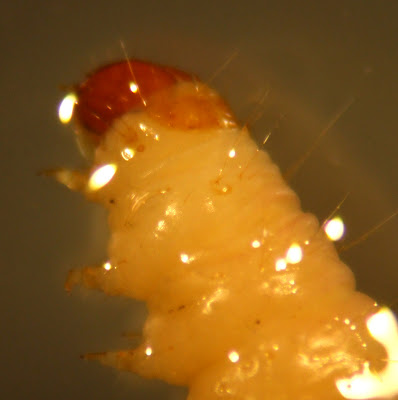 Posted by ParasiteGal at 12:35 PM No comments:

Answer: You should tell the clinician that this is likely a free living insect larvae and that there is no need for further concern. In this instance, the clinical presentation does not suggest myiasis since the larvae was not found within human tissues. Furthermore, this larva clearly has legs, which is NOT a feature of myiasis-causing fly larvae.

Upon further questioning, the patient reported what appeared to be a moth's nest in the box springs of his bed. The nest contained larvae that were identical to what is shown.
Posted by ParasiteGal at 8:36 AM 1 comment:

The following worms were removed from the small bowel during colonoscopy. At the time of the procedure, the endoscopist noted several punctate hemorrhages in the surrounding mucosa and rightly concluded that these represented previous attachment sites for the worms. 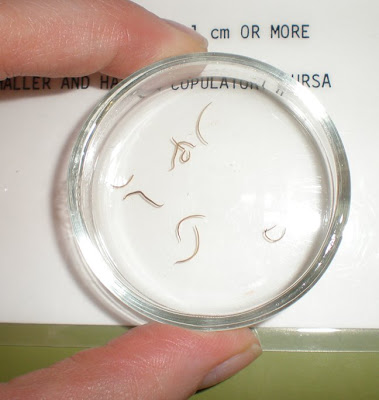 Light microscopy of the mouthparts revealed the following. 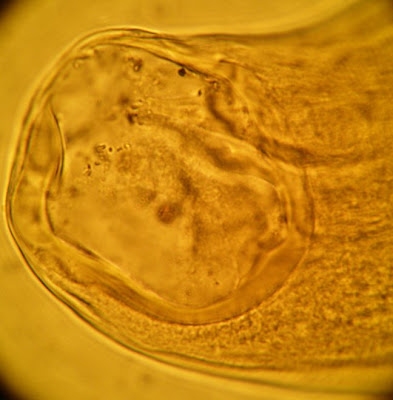 Answer: Hookworm. Necator americanus. You can distinguish N. americanus from the other hookworm Ancylostoma duodenale but the presence of cutting plates instead of teeth. See Case of the week 3 for an example of Ancylostoma mouth parts.
Posted by ParasiteGal at 12:31 PM No comments:

The following is a routine hematoxylin and eosin stained histologic section of small bowel. The patient presented with watery diarrhea. Identification? What would a likely clinical scenario be for this infection. CLICK ON IMAGES TO ENLARGE. 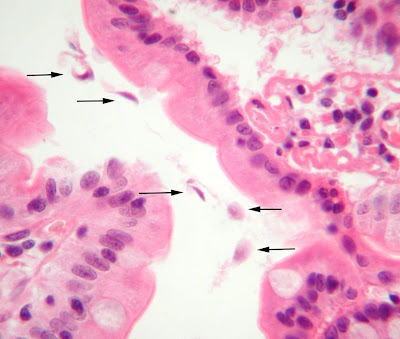 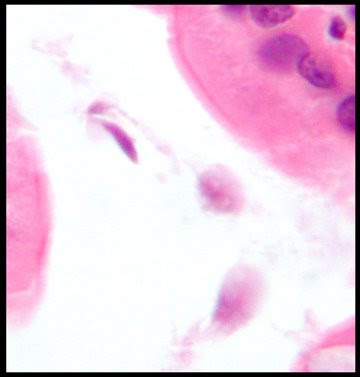 Answer: Giardiasis
Note that the organisms are cut in various planes so that you only rarely see a perfect pear shaped organism with 2 nuclei.

As part of this case, I asked the readers to propose a hypothetical scenario on how this infection was acquired. These are some of the answers I received:

1. Young, idealistic univerisity graduate takes the year before medical school to hike from Katahdin to Springer on the Appalachian Trial. Along about early October, somewhere in Blue Ridge of North Carlolina/Tennessee, after testing the limits of "minimalism" and ceasing to filter-sterilize his drinking water, he develops diarrhea so profuse that he's forced to hole up in a remote shelter for several days to regain strength. It is there that he first entertains a notion that the seemingly pristine "mountain streams" probably do serve as primary watershed for the many high-elevation pastures of nearby dairy and beef herds.

2. "Parasite Gal" and husband go hiking in the woods, get thirsty, and drink unfiltered water from a stream. Then, 24 hours later, they wish they were back in London.

I must admit that I am less fond of the second scenario, since it involves me personally!

Thank you for the creative responses.
Posted by ParasiteGal at 8:45 AM 1 comment: