The following was found in a stool specimen and submitted to the Clinical Parasitology laboratory for identification. It measures approximately 1.3 cm in length. Identification? 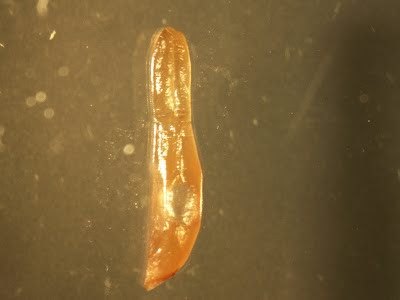 This case was signed out as "Not a human parasite. Most closely food material."

Go the the Visual Dictionary for a nice schematic of what I'm referring to.

In order to prove our hypothesis, one of our lab techs sacrificed her orange and we dissected it. I think the resemblance to our specimen is clear: 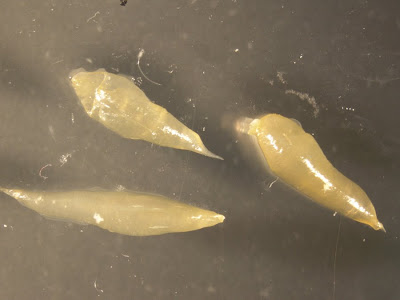 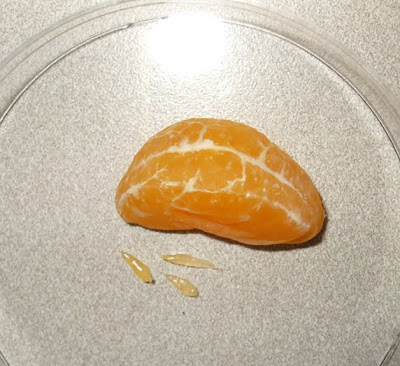 The following were seen on a peripheral blood smear from a patient who had traveled to an East African game park. 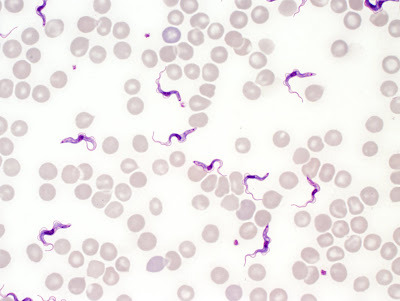 Posted by ParasiteGal at 8:31 AM 9 comments:

Given the history that this patient is from Eastern Africa, this organism is most likely to be T. brucei rhodesiense, which is limited in distribution to the Eastern side of the continent. However, as "Anonymous" mentioned in a comment to this case, the 2 T. brucei subspecies, T. brucei rhodesiense and T. b. gambiense, cannot be distinguished by morphology alone. Neuro_Nurse correctly points out that knowing the geographic exposure of the patient is very important for determining the most likely causative subspecies, since there is currently no geographic overlap between the two. Uganda is the only country in which both subspecies are found, and they currently occupy separate regions of the country. Clinically, infection with T. brucei rhodesience is typically more virulent and is treated with different anti-parasitic agents than infection with T. brucei gambiense.

Based on the blood smear morphology, a similar appearing trypanosome, T. cruzi, should also be considered in the differential. T. cruzi is found in South and Central America and causes American trypanosomiasis (a.k.a. Chagas disease). The most reliable method for differentiating the trypomastigotes (motile blood stage forms) of T. brucei and T. cruzi is by the size of the kinetoplast (see below, arrows). T. brucei has a relatively small kinetoplast, while T. cruzi has a larger kinetoplast. T. cruzi trypomastigotes also commonly form a "C" shape, although this is a less reliable feature. Finally, T. cruzi may also be found as a non-motile amastigote form in various tissues, while T. brucei is only found in the trypomastigote form in humans. 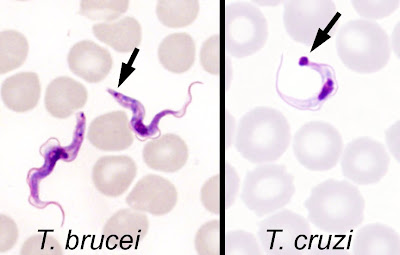 Posted by ParasiteGal at 5:28 PM 2 comments:

The following pieces of tissue (labeled "skin") were received in the laboratory from an 80 year old man. No further history was available. On closer examination, they appeared to be friable 'scabs' (CLICK ON IMAGES TO ENLARGE): 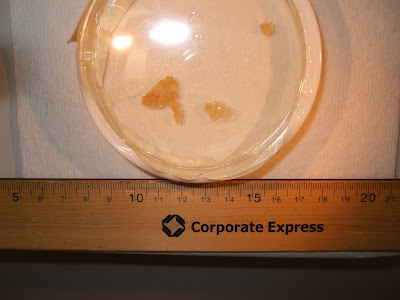 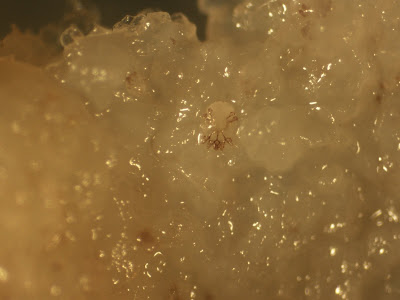 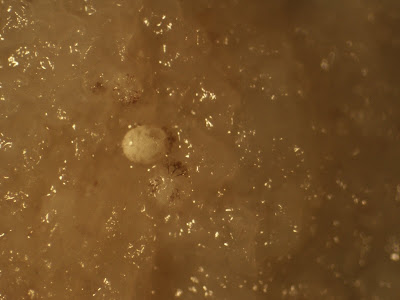 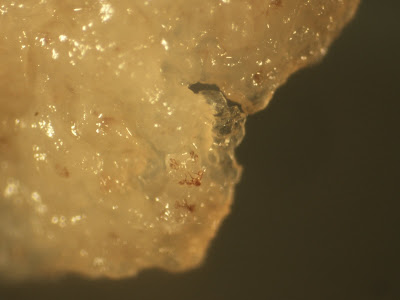 Some of them were moving!

Diagnosis?
Posted by ParasiteGal at 8:41 AM 6 comments:

Answer: Scabies caused by Sarcoptes scabiei (a.k.a. the "itch" mite)

This is a very remarkable case in that the mites are so numerous and that they were still alive when we received them. This degree of parasitism is consistent with Crusted or "Norwegian" scabies, occasionally seen in the elderly and individuals with a compromised or suppressed immune system. Patients with crusted scabies typically exhibit thick crusts of skin that contain thousands of mites. What is shown here is one of these crusts.

Some viewers commented that these organisms bore a resemblance to ticks; this is not surprising, since ticks and mites are both arachnids in the subclass Acari. They are differentiated by size (ticks are generally larger), and have a toothed hypostome and Haller's organ which ticks lack.

Thanks to everyone who wrote in on this case!
Posted by ParasiteGal at 8:16 AM No comments:

The following objects are Cyclops - one of the most common genera of microscopic fresh water Copepods (small crustaceans) that are involved in a number of parasite life cycles. So the question for this week: Which human parasites have Copepods in their life cycle? (CLICK ON IMAGES TO ENLARGE) 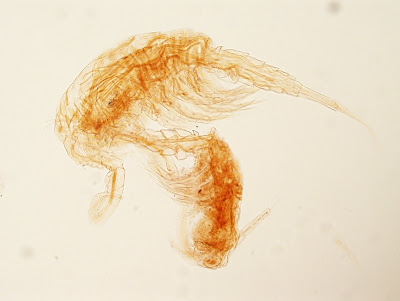 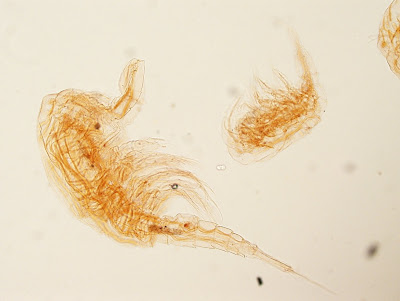 Posted by ParasiteGal at 8:16 AM 7 comments:

Answer: Copepods are involved in the following parasite life cycles:

You all did a great job!
Posted by ParasiteGal at 8:33 AM No comments: