This week's case is from Idzi Potters, Michiel R., and the Institute of Tropical Medicine, Antwerp.

An adult male with quite an extensive travel life as a photographer in Africa (DR Congo and Ethiopia), is now since 2 months in Rwanda when he finds the following structure of almost 15cm in length in his underwear (after having an awkward sensation at the level of the anus).

Can you identify this structure? 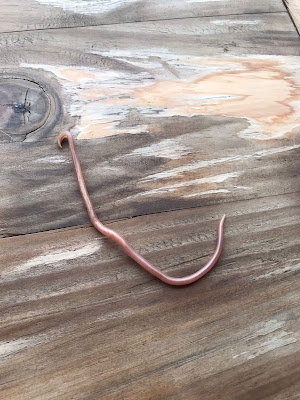 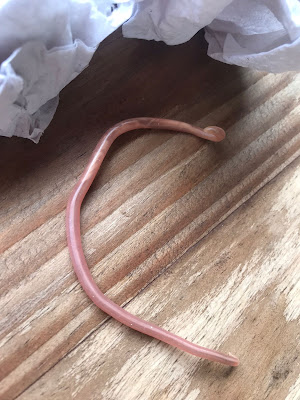 Posted by ParasiteGal at 6:44 PM 8 comments:

Answer to the Parasite Case of the Week 703:  Male Ascaris lumbricoides

As noted by Florida Fan, Dwight Ferris, and several others on Twitter and LinkedIn, we can tell that this is a male because of its curved tail. You can also see the characteristic mouthparts with 3 fleshy lips on the anterior end (if you zoom in quite a bit): 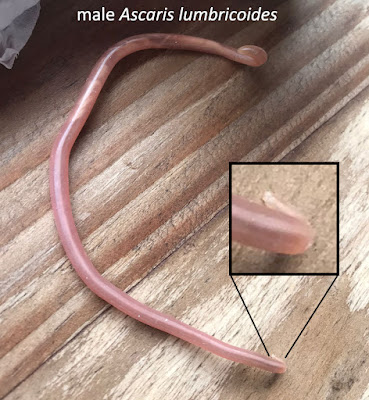 Note that this is a freshly-passed specimen, and fresh specimens may have a red-pink color. Given the color and size, this specimen may also be mistaken for an earthworm. Sam noted that the current specimen "can be differentiated from an earthworm as it lacks a clitellum (which is seen in earthworms in a reproductive state). Also the mouth parts of Ascaris and earthworms widely differ, which can be observed under a microscope."

Thanks again to Idzi for this outstanding case!

Posted by ParasiteGal at 10:15 AM No comments:

This week's fun find came from our Clinical Mycology lab, where the astute technologists noticed this object on a microscopic evaluation of skin scrapings treated with calcofluor white. Identification? Is there any need to call the ordering clinician? 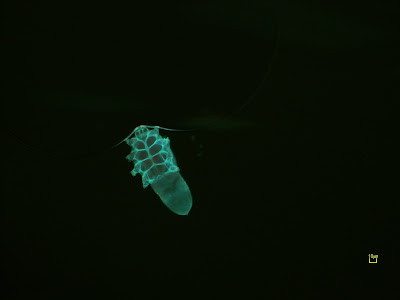 Answer to the Parasite Case of the Week 702: Demodex species; most likely D. brevis due to the short length of the posterior body (opisthosoma). As noted by Florida Fan, D. brevis inhabits the human sebaceous glands. This is in contrast to its lengthier neighbor, D. follicularis, which typically inhabits hair follicles. They are both primarily found in the face, including the eyelashes, eyebrows, and around the nose. Demodex spp. have 8 legs like other arachnids. The stubby legs end in blunt claws without pulvilli or suckers. Demodex mites also have short, blunt mouthparts and the body is elongated to a posterior point. Note that the mites do not have antennae; the structures seen below are artifacts from a neighboring air bubble. 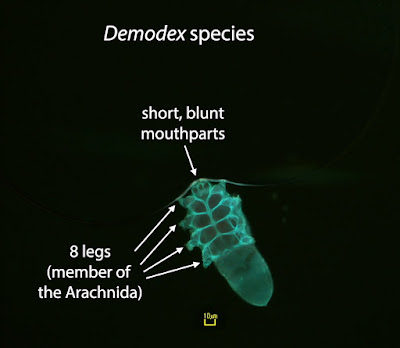 Demodex species are considered commensals in humans and do not usually cause disease. However, they have been associated with certain inflammatory conditions when present in large numbers, including folliculitis and rosacea. Therefore, they are worth reporting, but there is no need to urgently call the ordering provider with this finding. Thanks again to the Mycology lab for this beautiful photograph!

Posted by ParasiteGal at 8:06 PM No comments:

This week's case goes with some of my recent posts. The following arthropod was submitted from a patient with an itchy rash of his abdomen, pelvic region, and upper thighs. Identification? Also, are there any remarkable features of the particular parasite shown here? 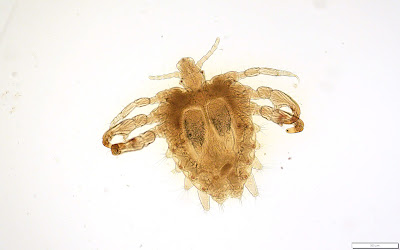 Posted by ParasiteGal at 8:22 AM 8 comments:

Answer to the Parasite Case of the Week 701: Female Pthirus pubis, a.k.a, the 'crab' or 'pubic' louse. She is gravid - with 2 eggs! I've seen many female crab lice with eggs, but never one with two eggs at once, so when I came across this specimen, I immediately wanted to share it with you. An anonymous reader commented that "She's very likely to die prematurely from being egg bound, and will suffer from that full feeling."  I thought that was a very interesting (and rather witty) statement. Does anyone know if a female P. pubis with 2 eggs is less likely to survive? 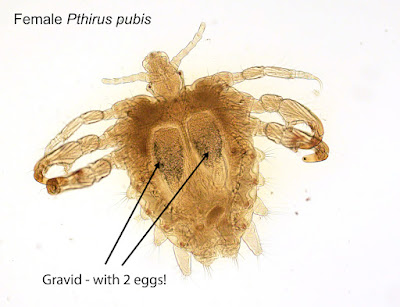 Note that the pubic louse is shaped somewhat like a pelvis - a helpful feature for differentiating it from the head/body louse, which has a much longer body. The pelvis reference is useful since P. pubis is sexually-transmitted. It's also important to note that both the pubic and head/body louse have large raptorial (grasping) claws, but the pubic louse has larger claws on the second and third legs which, in combination with its body shape, make it look particularly crab-like.
As mentioned by Sam, we can tell that this is a female due to the morphology of the posterior end, whereas the male posterior end is more rounded. He also commented that "This louse causes genital crabs. The claws are designed to latch onto the course pubic hairs of the genital area, allowing sexual transmission of this ectoparasite."  Here is a side-by-side comparison of the 2 human lice (Pediculus humanus and Pthirus pubis) for comparison. Also check out Case of the Week 700 for a nice example (and my mascot!) of P. humanus. 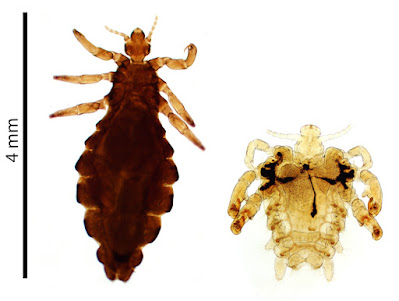 Head/body louse (left) and pubic louse (right)
Thank you all for the excellent comments on this case!

Posted by ParasiteGal at 7:57 AM No comments: