This week's case just came through my lab. The video and photos are courtesy of my excellent technical specialist, Heather Rose. Identification? 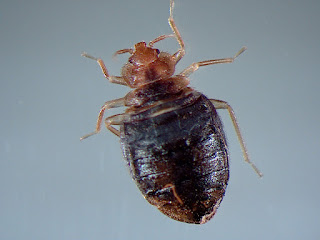 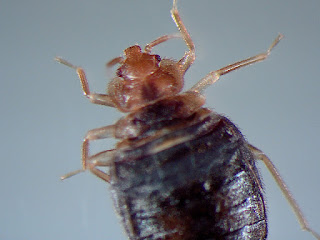 It was hard to get a still shot of this little arthropod:

Posted by ParasiteGal at 4:33 PM 7 comments:

Eew, indeed. As someone who has been in hotel beds more than my own recently, I have perfected the 'bed bug check' of the hotel room. I have been fortunate so far NOT to have found any of these little pests in my hotel room. I am now on my way to Belize for a vector-borne disease capacity-building project and hope that the trend continues.

Thanks to William Sears and Florida Fan who shared some nice stories about C. lectularis, and its cousins, the bat bugs (check them out in the comments section).

Blaine also helpfully pointed out that you *might* be able to see the ecdysial scar on the pronotum, which would indicate that this is a nymph rather than adult female as I had originally indicated.  I believe he is correct and so I took our my description of gender from the initial case description.


Posted by ParasiteGal at 10:00 AM No comments:

For this week's case, I'm going to take advantage of whole slide imaging technology via the cloud. The patient is a middle-aged male smoker from the southern United States who presented with shortness of breath, and imaging revealed a lung nodule. Because of concern for malignancy, the nodule was excised and sent to pathology for analysis. Here is a representative image of the nodule: 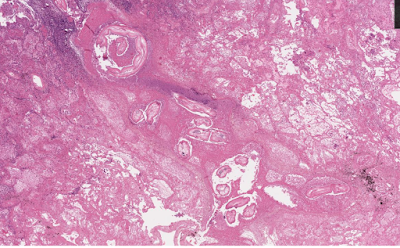 Click HERE to zoom in and explore this slide! You don't need any special password or software to view the case.

Posted by ParasiteGal at 2:33 PM 8 comments:

Answer: Dirofilaria sp., most likely D. immitis, given the location in the lung.
As Blaine pointed out, this case is unusual in that it features an adult rather than larval worm, as evidenced by the presence of reproductive organs. While it's not uncommon to see adult Dirofilaria in subcutaneous lesions (e.g. caused by D. tenuis), it's very uncommon (but not unheard of) to see adults in the lung. Some of the diagnostic features are highlighted in the image below. 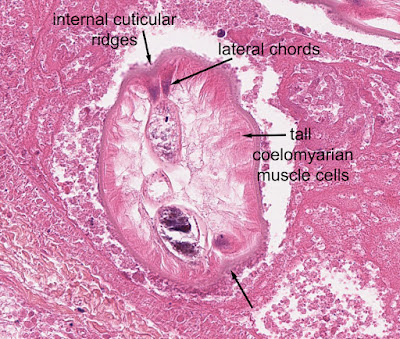 Thanks to everyone who gave the whole slide imaging technology a 'whirl', even if histopathology is not your area of expertise.
Posted by ParasiteGal at 3:33 PM No comments:

This week's case is donated by Dr. Luis Fernando Solórzano Álava from Ecuador. The 'patient' is not a human, but rather an Ecuadorian snail. However, the parasite shown is indeed very pathogenic to humans and has a predilection for the central nervous system.

You can also see the video HERE. 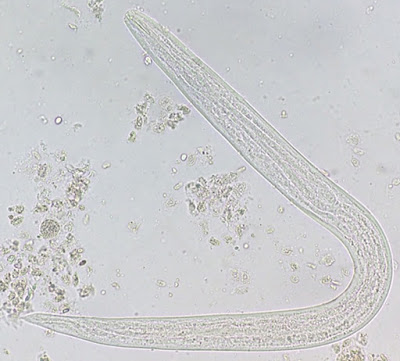 Any thoughts on its identification?
Posted by ParasiteGal at 9:26 PM 9 comments:

As many of you mentioned, the clues to the identification of this parasite are the characteristic morphology of the larvae, the host (snail), and the predilection of the parasite for the human central nervous system (CNS). A. cantonensis can infect snails and slugs, which if accidentally ingested, can lead to debilitating, even fatal, eosinophilic meningitis in humans when the immature worms migrate to the CNS and die. Human infection can also be acquired through ingestion of infected paratenic hosts such as crabs and fresh water shrimp, and may potentially be acquired through ingestion slug/snail slime containing L3 larvae on inadequately-washed vegetables.

Although this infection was first identified in Asia, it has spread throughout the Pacific basin, and is also found in parts of Africa, the Caribbean, and Ecuador. Florida Fan points out that the related organism, A. costaricensis, causes intestinal angiostrongyliasis, and is found in parts of South and Central America. Most cases of A. costaricensis infection are reported from Costa Rica

Here are some nicely-labelled images that Dr.  Solórzano Álava created for this case that demonstrate the key morphologic features. I find the pointed tail to be especially helpful! 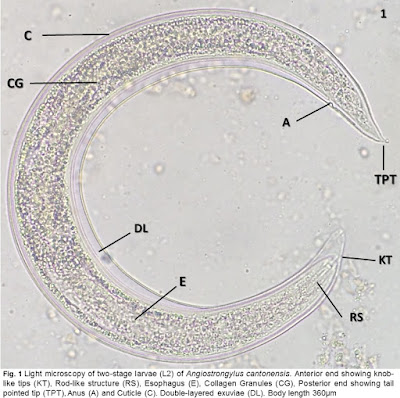 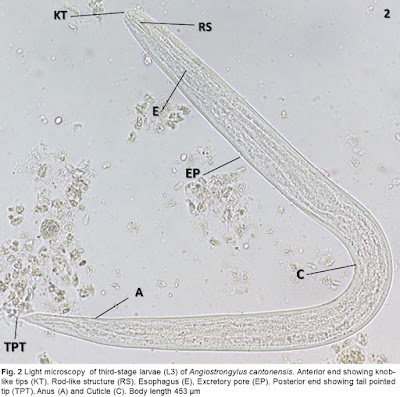 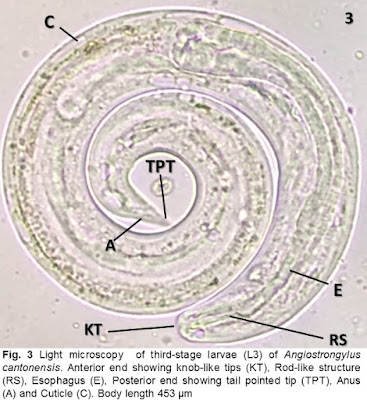 It's the first of the month again - time for a case from Idzi Potters and the Institute of Tropical Medicine, Antwerp!


The patient is a frequent traveler who recently returned from Kenya where he participated in a game tracking excursion. He now presents with high fever, malaise and headache. The following were seen in a preparation of unfixed blood:


You can also see the video on YouTube: https://youtu.be/IGadYEsc5rA


A Giemsa-stained thin blood film was also performed and showed the following: 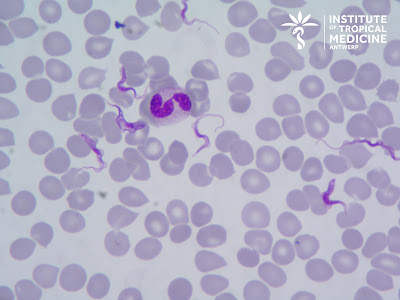 Answer: Trypanosoma brucei
This is most likely T. brucei rhodesiense based on:


Be sure to check out the video which show the characteristic 'auger' like motility of the trypomastigotes (i.e. rotating along its long axis).

Thanks to everyone who wrote in with the excellent comments. A lot of good points were raised by all. Ali Mokbel mentioned that we can't exclusively rule out T. b. gambiense, given that the patient is a frequent traveler and may have been to West Africa. Idzi also reminded us that the trypomastigotes of T. brucei are indistinguishable from those of T. rangeli, a non-pathogenic New World trypanosome which can occasionally infect humans. Fortunately, we can tentatively rule out these other species/subspecies based on the very high parasitemia and patient's symptoms. If there was any question about the identification (e.g. based on the patient's travel history), sub-species determination using PCR could be performed.

Finally, LS reminded us of the importance of determining whether the patient had central nervous system involvement since that would change the therapy. If suspected, a lumbar puncture could be performed to look for trypomastigotes.

For our students of parasitology, the following contains some general information about trypomastigotes, the most trypanosome stage seen in peripheral blood. Trypomastigotes are extracellular, unlike Plasmodium parasites, and may be seen 'swimming' between the red blood cells as in this case (check out Idzi's really cool video!). Although they have a somewhat 'worm-like' appearance, they are protozoa (not helminths), and can be easily differentiated from microfilariae by their small size (14 to 33 micrometers in length). They have a kinetoplast at their posterior end (arrows in image below) and a centrally located nucleus. A flagellum arises from the basal body (associated with the kinetoplast) and travels along the long axis of the trypomastigote as an undulating membrane. It projects from the anterior end as a free flagellum (arrow head, below), and provides the characteristic 'auger-like' motility of the trypomastigote. 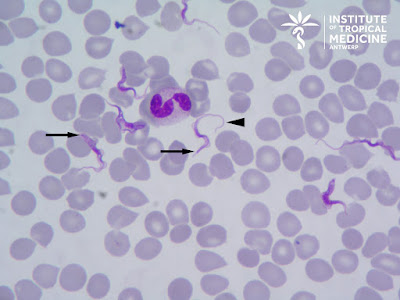 Note that the flagellum is at the anterior end of the trypomastigote, and not the posterior as many would expect! 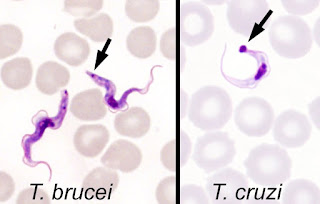