Here's a challenge for all of you:
Nasal polyp removed from a 50 year old Indian man with complaints of chronic nasal obstruction. Histologic exam reveals the following: (CLICK ON IMAGES TO ENLARGE) 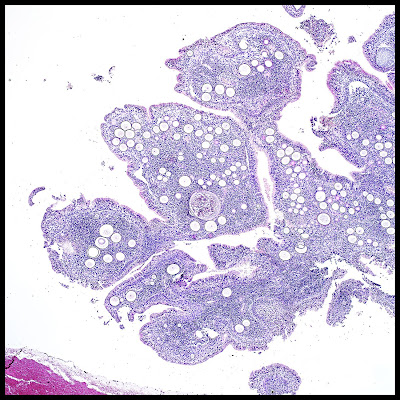 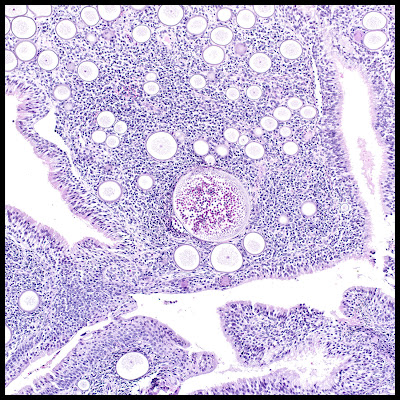 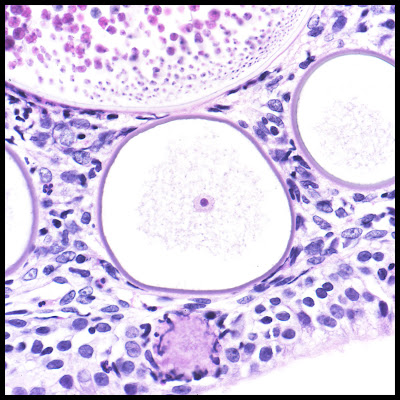 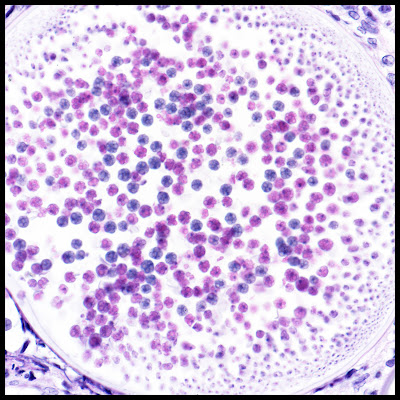 
Diagnosis?
Posted by ParasiteGal at 8:08 AM 4 comments:

Congratulations to Anonymous (x 3!), Kenneth, Chris, Victor, and Santoshpath who all got this correct! The keys to the diagnosis is the clinical history (location in nasal mucosa), exposure history (India), and histopathologic features of a polypoid mass containing mature sporangia (large, thick-walled spherical structures) and smaller internal sporangiospores (daughter cells). The sporangia stain with the fungal stains Gomori methenamine silver (GMS) and periodic acid-Schiff (PAS), and may mimic the appearance of similar appearing fungi such as Coccidiodes immitis (as one viewer suggested) and Chrysosporium spp. (the agent of adiaspiromycosis). Myospherulosis, a non-infectious entity, is also in the differential diagnosis. The difference between these entities is in the size of the spherule/sporangia and the internal structures.

This organism was previously considered to be a fungus, but it is now considered to be an aquatic protistan parasite (classified under Mesomycetozoea, which includes parasites of fish and amphibians). Rhinosporidiosis is endemic in India, Sri Lanka, South America, and Africa.

Although the disease most commonly involves the mucosa of the nose, mouth, and conjunctiva, involvement of the skin, ear, genitals, and rectum has also been described. Disseminated infection has been described in 3 individuals.

Thank you all for viewing and writing in!
Posted by ParasiteGal at 7:56 AM No comments:

The following images of Giemsa-stained peripheral blood films were taken from a 20-year old female who just returned from a trip to Kenya.

Identification?
What messages are important to relay to the treating physician? (CLICK ON IMAGES TO ENLARGE) 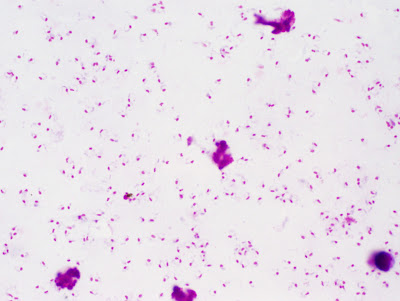 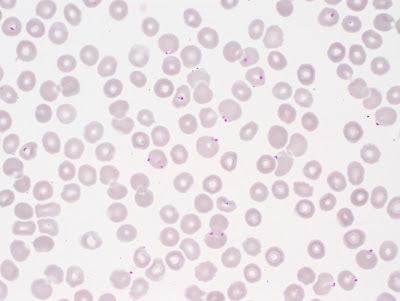 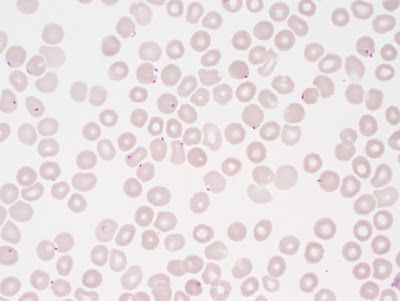 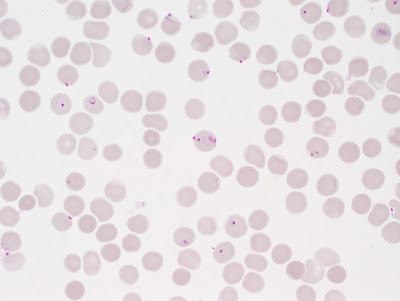 Posted by ParasiteGal at 1:47 PM 4 comments:

This case has classic features of P. falciparum infection, including multiply-infected RBCs, small delicate ring forms in RBCs that are not enlarged, and numerous applique forms. The parasitemia is also quite high. As anonymous mentions, "it looks like 20%, which is in the 'ack!' range." The thick smear in this case is especially impressive!

Fortunately, this patient was promptly treated and did well on medication alone. At last count, her parasitemia levels were undetectable. She did not undergo exchange transfusion, but this certainly was a consideration, given her high parasitemia.
Posted by ParasiteGal at 8:01 AM No comments:

The following were seen on a Giemsa-stained thick blood film made from EDTA whole blood. Identification? 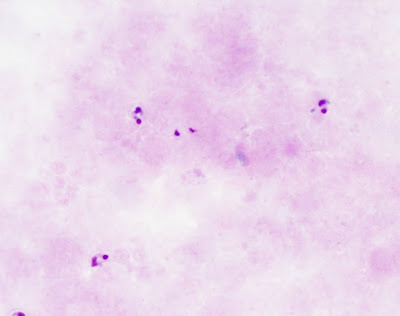 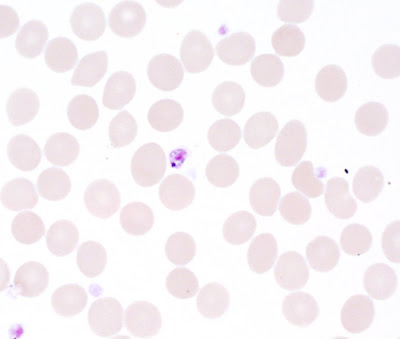 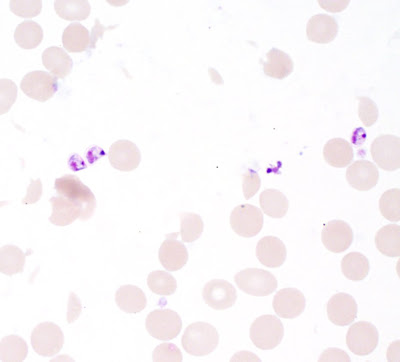 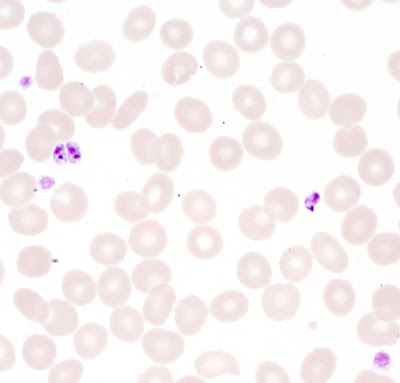 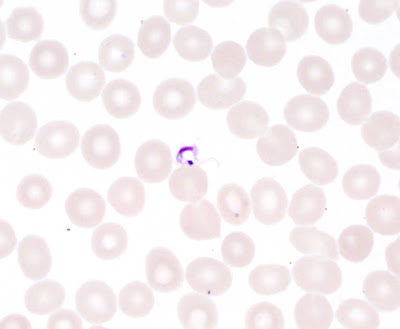 Which forms are present?
Posted by ParasiteGal at 8:45 AM 3 comments:

Answer: Trypomastigotes and intermediate trypomastigote/amastigote forms of Trypanosoma cruzi.
Thanks to everyone who wrote in for this case! This was, admittedly, a tricky case, since it is uncommon to see amastigote-type forms in peripheral blood. The reason these atypical forms were present is because this specimen was grown in culture and then innoculated in peripheral blood (artificial infection). Fortunately, the classic "C-shaped" trypomastigote forms with large kinetoplast were still abundant and allowed accurate identification. Although you wouldn't expect to see a case like this in nature, this type of preparation may show up on proficiency test (since this material is typically grown in culture). Another important point of this case is that the forms on the thick smear resemble Plasmodium rings; thus, it is always important to examine BOTH the thick and thin smears!
Posted by ParasiteGal at 1:26 PM No comments:

Welcome back to Case of the Week! It's been a while since our last post due to the holiday, but now we're back on schedule with a fun video for you:

The following insect was removed from the flank of a Medical Resident from Minnesota who had mistaken it for a 'mole' or 'skin tag'. He notes that it had been present for at least 5 days. He is concerned that he is now at risk for an arthropod borne disease; specifically he is worried about Lyme disease. What should you tell him?

Here are some accompanying images to aid in identification.
(CLICK ON IMAGES TO ENLARGE) 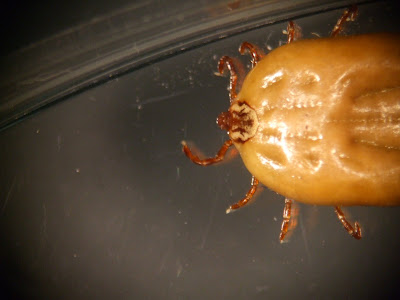 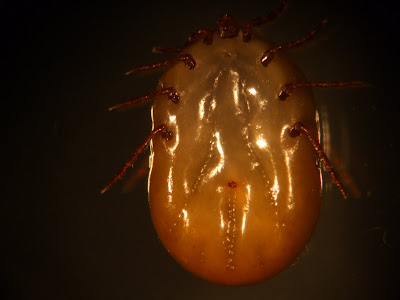 Posted by ParasiteGal at 2:37 PM 5 comments:

Routine prophylaxis of tick-borne diseases is not generally recommended; instead, you should tell him to monitor himself for symptoms of a tick borne disease (e.g. headache, myalgia, fever, rash, influenza-like illness) and see a physician immediately should any symptoms appear.
Posted by ParasiteGal at 8:10 AM 1 comment: