Parasite Case of the Week 2

Happy New Year!
I figured I would start off 2008 with a fun arthropod case. Also, to reward your patience, here are the answers to the last case:
http://parasitewonders.blogspot.com/2007/12/answer-to-case-1.html
Each week, I will post the answers below the corresponding case. 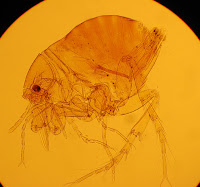 Questions:
Identification (genus and species)?
What disease does this arthropod cause?
Posted by ParasiteGal at 2:35 PM 7 comments:

Questions:
Identification (genus and species)? Tunga penetrans or "jigger" flea
What disease does this arthropod cause? Tungiasis.
This is the only flea that buries into human skin to lay its eggs.

Fleas can be tricky to identify if you're not familiar with them. Here are a few ways to tell this flea apart from others seen in association with humans:

As seen below, Tunga penetrans is a very distinctive flea (click on image to enlarge). It has a compressed thorax, upturned rear, and long serrated mouthparts (all the better to pierce your skin). 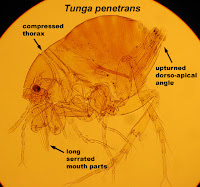 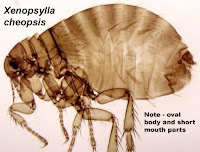 Finally, other fleas that may be seen in association with humans are Pulex irritans (the aptly-named human flea, which actually infests many different animals including humans), Ctenocephalides canis (dog flea), and Ctenocephalides felis (cat flea). The latter two will bite humans when their animal hosts are not available. My thanks to "anonymous" who reminded me that Ctenocephalides can transmit dipylidium caninum to humans (usually children)

Note that Ctencephalides fleas often have "combs" - what appear as a mustache (genal comb) and head fringe (pronotal comb) in the example below. 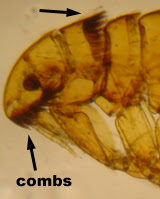 Parasite Case of the Week 1

Creepy Dreadful Wonderful Parasites will now be posting a new parasite Case of the Week. Starting every Monday, a new case will be posted. Please feel free to submit your answers and comments (there's an anonymous feature for those of you who are shy). The answer will be posted the following week with the new case. 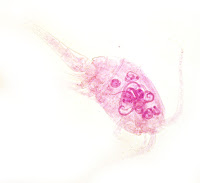 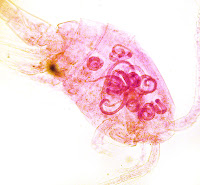 Click on the images to enlarge.
Questions:
What is this organism?
What are the objects within it?
List 2 parasites transmitted by this vector. Bonus - list 4!
Posted by ParasiteGal at 8:49 AM 4 comments:

What is this organism? Cyclops, a copepod or "water flea", a small crustacean
What are the objects within it? larvae of Dracunculus medinensis. Cyclops is the intermediate host for this parasite.

Great job to those who wrote in - a couple of you got all 4!


Posted by ParasiteGal at 1:54 PM No comments:

What is a Parasite?

According to Stedman's Medical Dictionary, a parasite"

This definition is, admittedly, broad.

Most would agree that a worm that lives in the intestinal tract of another organism and draws blood and nutrients from its host is a clear example of a parasite.

A body louse (pictured on the upper right of this page) that feeds on humans is also a parasite. In this case, it is an ectoparasite; it that lives on the outside of its host.

In contrast, a bacterium that lives in the mouth of a healthy individual without causing any notable harm is NOT considered to be a parasite.

But what happens when this same bacterium invades the throat and causes severe pharyngitis, known to most as "Strep throat." Is it now considered a parasite?
A bit harder to answer.

The same question could be applied to viruses and fungi.

Finally, would a human fetus inside the womb be considered a parasite? I'll let you answer that one for yourself.

For the purpose of this blog, I will limit my definition of a parasite to an organism that is phylogenetically unrelated to its host, lives in or on its host, and is a eukaryote. The latter excludes bacteria and viruses. By tradition, fungi are also excluded (although they are also eukaryotic). Our focus will be parasites of humans, although I'll likely throw in an odd reptile or amphibian parasite just for fun. Enjoy!
Posted by ParasiteGal at 12:05 AM 6 comments: