Objects such as those shown below were seen in a urine specimen submitted for examination. According to the patient, he had passed several of these objects in his urine. Possible identification?

Most of you astutely noted that these are NOT organisms you would expect to find inside the urinary bladder, and most likely result from exogenous environmental contamination after the sample was obtained.

At this magnification, you can appreciate the presence of siphons by which the larvae breath oxygen from the above the surface of the water. That puts them in the Culicine subfamily, which includes the Culex and Aedes genera. Given that these larvae are in urine, they are most likely Culex spp., since this species can tolerate high levels of organic pollution, and may be found in cess pits, open drains, and pit latrines.
Posted by ParasiteGal at 1:01 PM No comments:

The following larval tracks were seen on an agar plate that had been inoculated with the sputum of an immunocompromised patient from Kentucky. What parasite should you be concerned about? (Tracks are viewed using 4x objective) 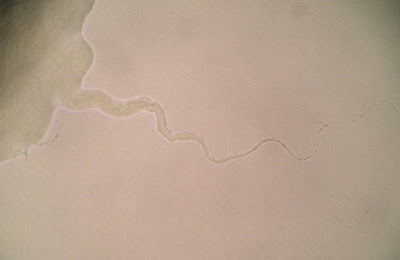 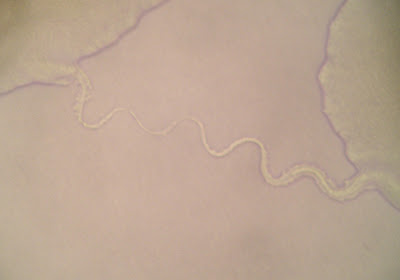 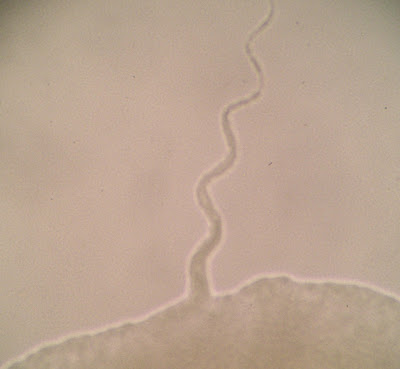 Posted by ParasiteGal at 3:16 PM 5 comments:

Answer: tracks left by Strongyloides stercoralis larvae. In this "culture" technique, stool is typically placed on a beef extract agar plate and incubated at room temperature. If Strongyloides stercoralis larvae are present, they will move out of the stool specimen, dragging bacteria with them. What we're actually seeing in this case the bacteria growing in the wake of the moving larva. These "tracks" can be seen using a dissecting microscope, and are typically present 24-48 hours after initial plating. Using a 4x objection, it is also possible to see "furrows" left in the agar by migrating larvae (without associated bacterial colonies) and the worms themselves.

Since this was a sputum sample, we were concerned that there was not enough bacteria present to allow the larva to create tracks; therefore, we made a 2:1 concentration of sample to Escherichia coli mixture and plated this on the agar.

A few interesting facts about Strongyloides stercoralis culture:
1. This technique was first described by Arakaki et al (1988).
2. In general, it increases the yield of positive cases by 50% or more compared to the formalin-ether concentration method.
3. Furrows and bacterial tracks are suggestion of a migrating larva, but definitive diagnosis is best accomplished by identification of the worm itself.
3. Other nematode larvae, such as free-living larvae and hookworm larvae, can be seen with this technique, so microscopic examination of the worm is important for differentiation. Of note, you would only expect to find these 2 larvae in stool samples that have sat at room temperature for an extended period (e.g. in hookworm infection, since this allows the eggs to hatch into L1 larvae), or if the sample was contaminated by soil that may contain free living nematodes.
4. Finally, as suggested by cmassey, the tracks resemble an aerial photo of the Amazon river flowing into the ocean!

Thanks to everyone who wrote in with comments.
Posted by ParasiteGal at 5:20 AM No comments:

The following were an unexpected finding from a ultrasound guided endoscopy and FNA of a pancreatic cyst. Giemsa stained, 400x and 600x. 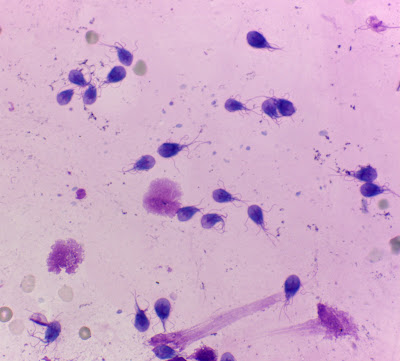 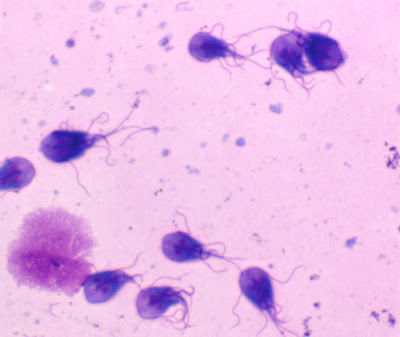 Question: What anatomic site did these organisms most likely come from?
Case courtesy of Dr. Abdelmonen Elhosseiny
Posted by ParasiteGal at 5:03 PM 5 comments:

As many of you guessed, these organisms were most likely picked up in the duodenum when the endoscope was threaded through the small bowel to get access to the pancreatic cyst. I don't know of any reports where Giardia trophozoites actually inhabited a location other than the intestinal lumen.

This is really a beautiful example of the trophozoite morphology, and again, I'd like to thank Dr. Abdel Elhosseiny for this case. The giemsa stain nicely highlights all of the flagella which are not usually seen so clearly in a routine stool Trichrome stain.

Thanks to all for writing in with your comments!
Posted by ParasiteGal at 3:05 PM No comments:

An inflamed appendix was removed surgically and sent to Surgical Pathology. When it was cut open, approximately 15 of the following objects were found inside the lumen:
(CLICK ON IMAGES TO ENLARGE) 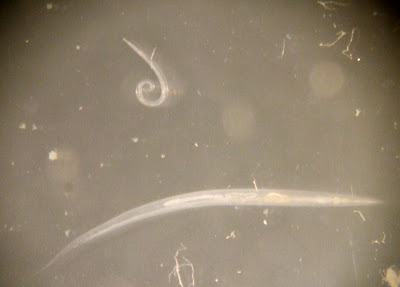 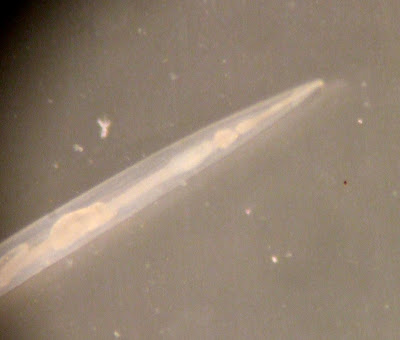 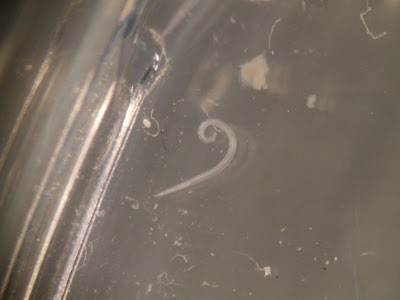 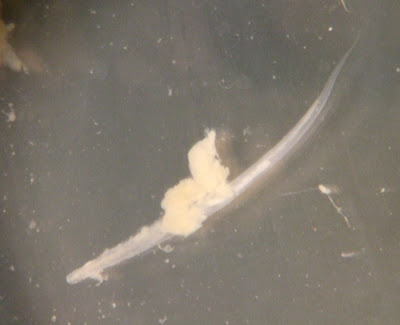 Posted by ParasiteGal at 8:34 AM 2 comments:

Answer: Pinworm (Enterobius vermicularis) infection. As Anonymous mentions, there is both a male and female in the top image. The male is much smaller and has a curved tail.

Besides the characteristic location (appendix and cecum), there are several features that allow for identification of these worms. First, the largest worms measure 1 cm or more in length, compared to the smaller 5 mm-long males (although I didn't give you this information in this case). Second, the females have a distinctive sharply pointed tail (pin-like) that comprises approximately 1/4 of their length. In both sexes, there are lateral alae (cephalic inflations) which are most marked on cross-section (and aren't easily seen in this case). Finally, they have a distinctive well-defined esophagus which is divided into a muscular and bulbous portions. The esophagus is nicely seen in this case, as illustrated below. 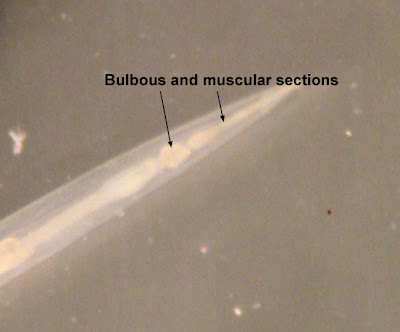 Posted by ParasiteGal at 3:37 PM No comments:

The following object was found in the diaper of a 1 year old female. The mother noted that it was moving when found. Identification? 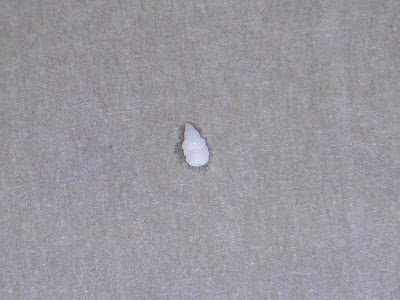 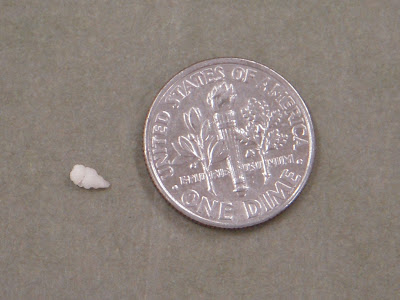 Posted by ParasiteGal at 8:33 AM 5 comments:

Well, this was definitely a challenging case this week! Many of you wrote in with suggestions that this is some type of fly larvae, and that is certainly a good thought. However, there are no structures such as spines or mouth parts to confirm this identity, and the history would be a bit odd.

Instead, this is actually a proglottid of Dipylidium caninum, the double-pored dog tapeworm. Although classically likened to "grains of rice," mature and gravid proglottids have been described as "pumpkin seed" shaped (as seen here).

The diagnosis is confirmed by identifying the characteristic egg packets of D. caninum. This can be accomplished by gently expressing eggs out of the proglottid using a sterile applicator stick. 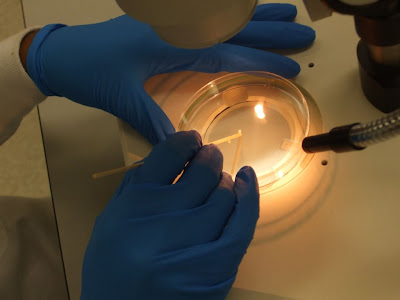 Any surrounding fluid can then examined microscopically. In this case, the following eggs were seen. 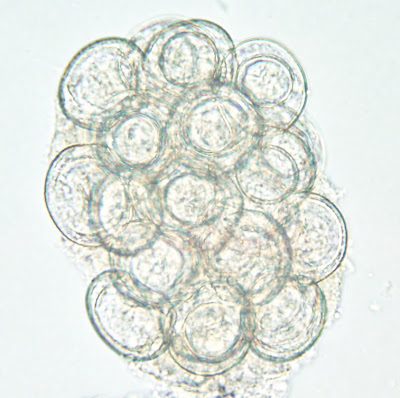 Congratulations to Fred P. who got this one correct!
Posted by ParasiteGal at 5:04 AM No comments: