This week's case was generously donated by Dr. LoAnn Peterson and Dr. Alicia Franken from Northwestern Memorial Hospital in Chicago.  The patient is a male in his early 50s with recent travel from Cameroon.  The following images are from Wright-Giemsa stained thin films made from peripheral blood.  Identification? 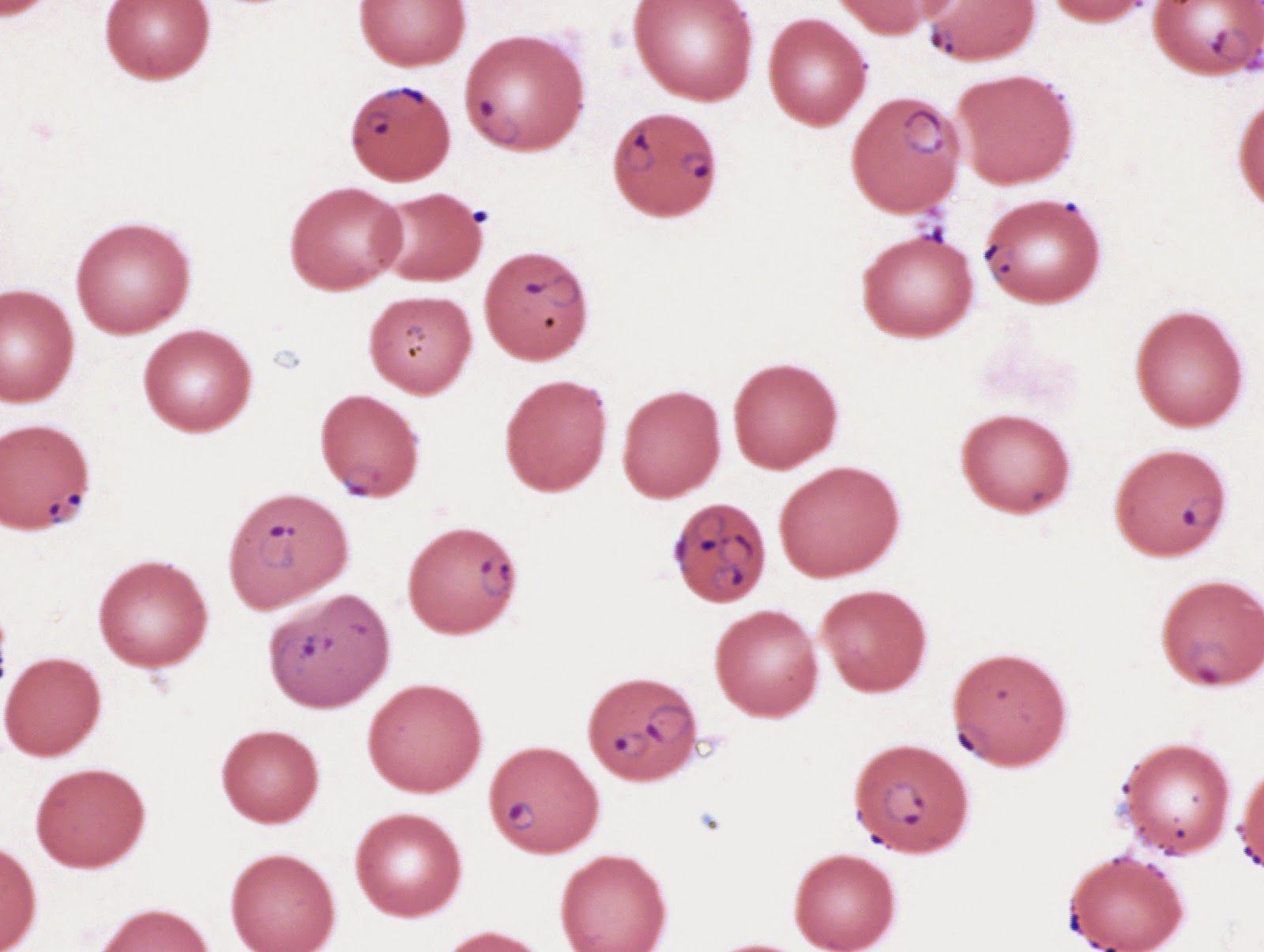 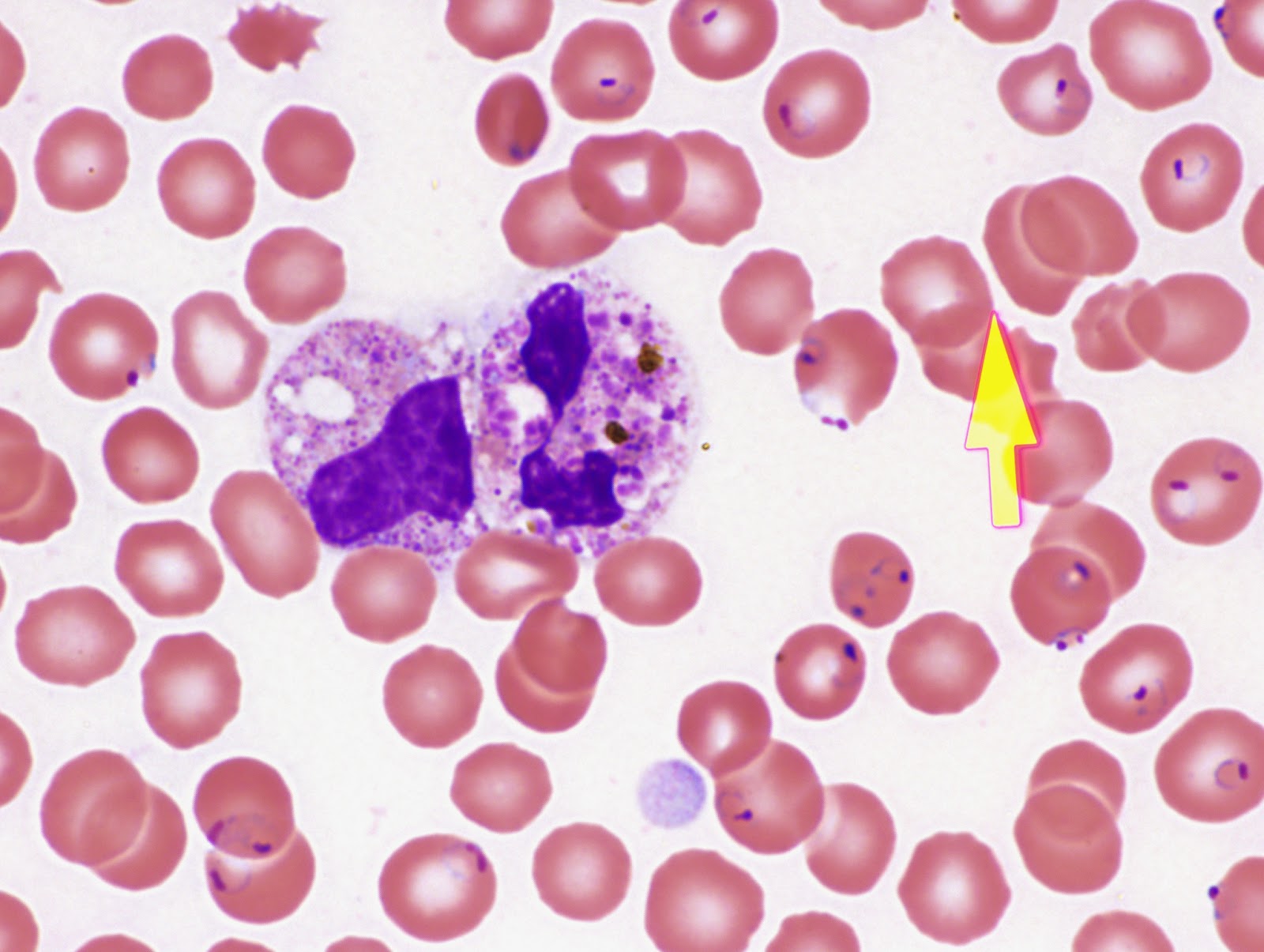 This case shows several of the characteristic morphologic features of P. falciparum infection, including normal size of the infected RBCs, the presence of only delicate ring forms (early trophozoites), and specialized "applique" and "head phone" forms.  There are also multiply-infected RBCs, which is characteristic (but not definitive) for P. falciparum. No stippling is present.  As noted by several readers, this is a heavy infection.  Calculation of percent parasitemia is important for guiding therapy and predicting patient prognosis. Note the presence of malaria pigment (hemozoin) inside of the neutrophils in the second image): 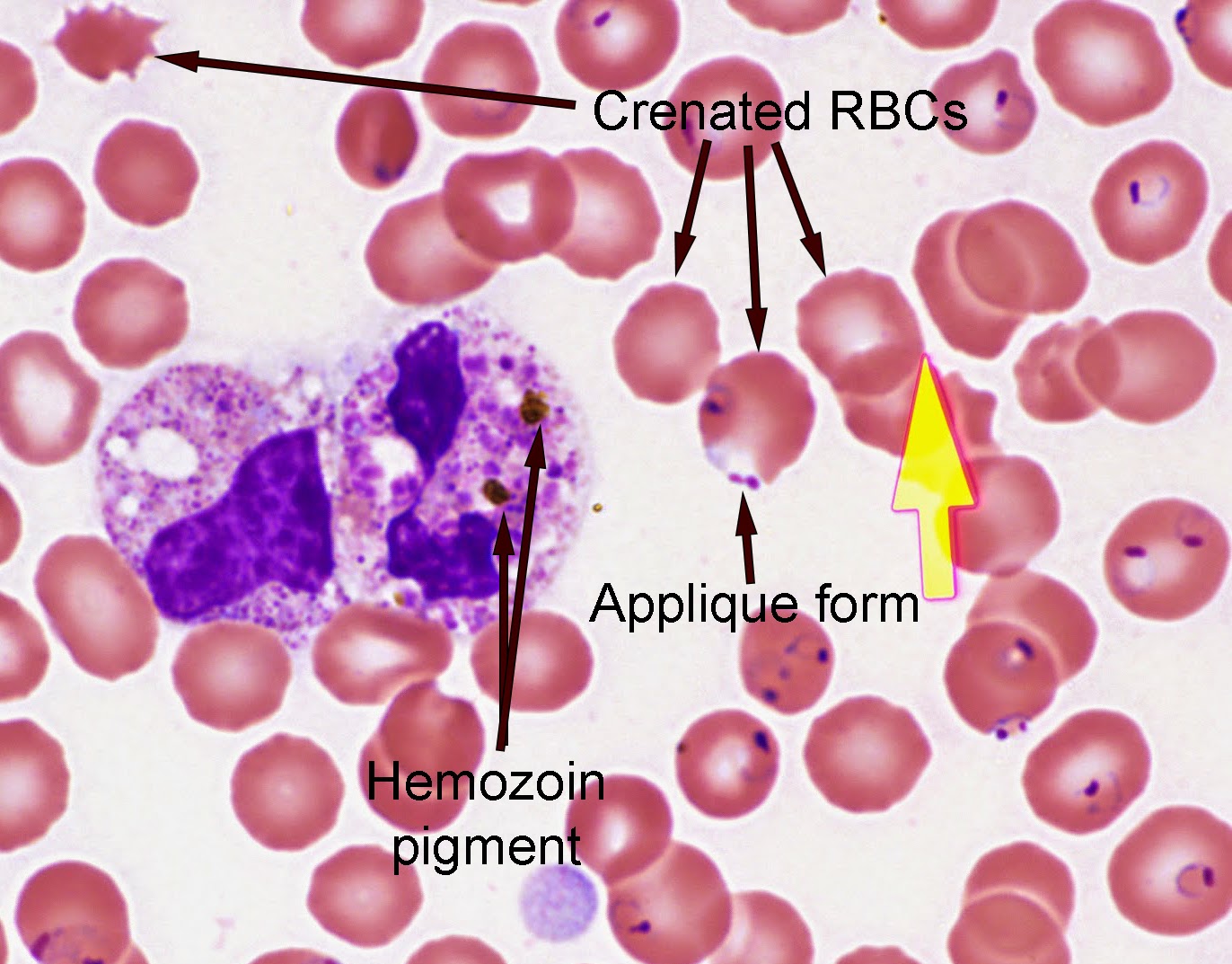 An important feature pointed out by Florida Fan is that a few of the RBCs are crenated, which should not be mistaken for the "fimbriations" of P. ovale.  Some clues that can help in this regard are that the infected RBCs are not enlarged (as would be expected for P. ovale - particularly in later stages) and that crenation is seen both infected and non-infected cells.  The latter is probably the most important point, since this indicates that crenation effect is due to either host factors or, more likely, an artifact of smear preparation, and not due to the presence of the parasite inside the RBCs.
Posted by ParasiteGal at 7:48 PM No comments:

Happy Holidays to all of my Readers! 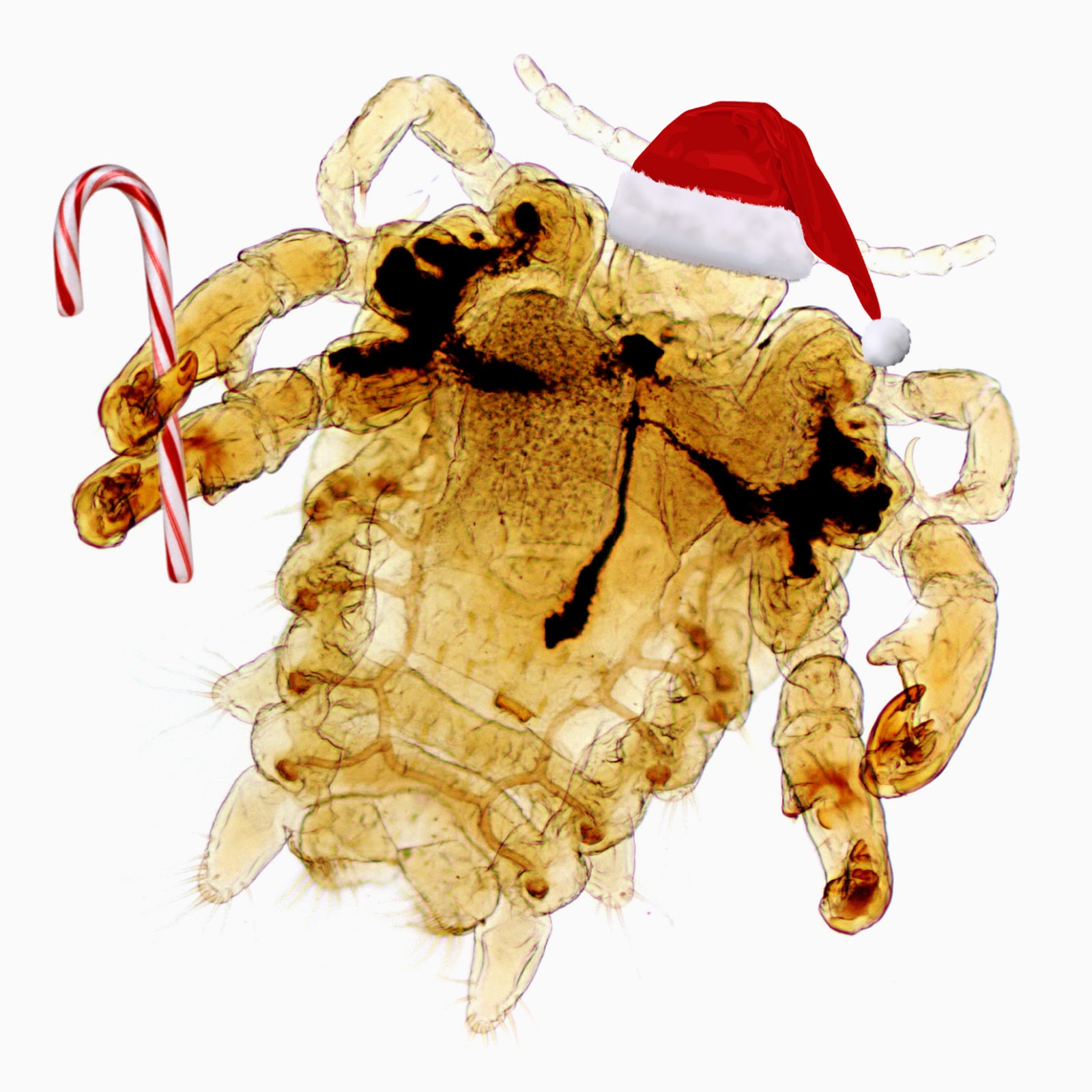 Here is a special holiday poem from Blaine Mathison:

He’s causing an itch
making you scratch
with those strong raptorial claws
hard to get him to detach
Santa Crab is coming to town.

He loves it when you’re sleeping
for that’s when he becomes aroused
You can buy up all the permethrin in town
you’ll still have to explain it to your spouse.

Dear Readers,
You may be interested in a new Parasitology bench guide that I produced through the College of American Pathologists Press: (shameless promotion, but I make no money from this book) 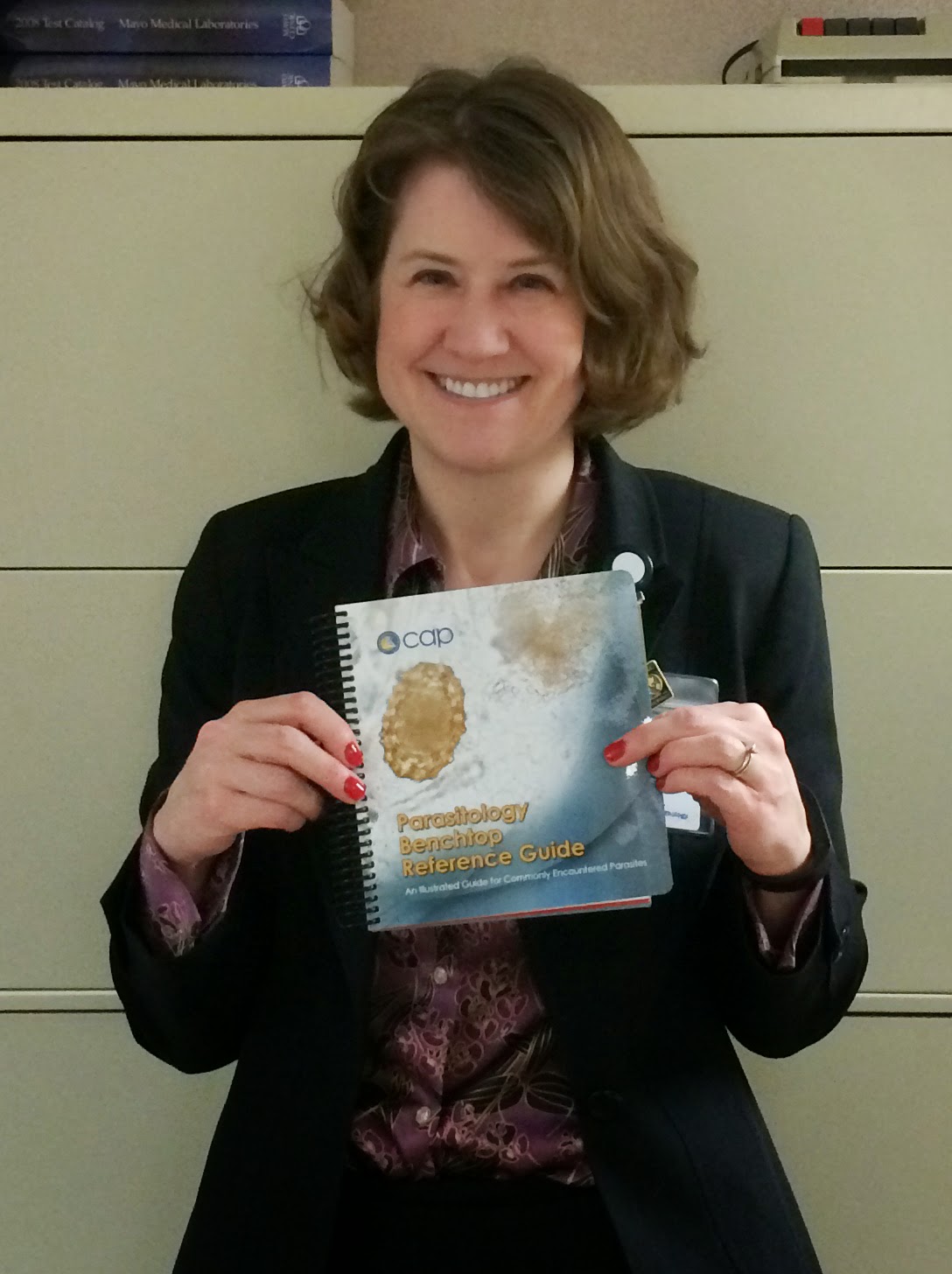 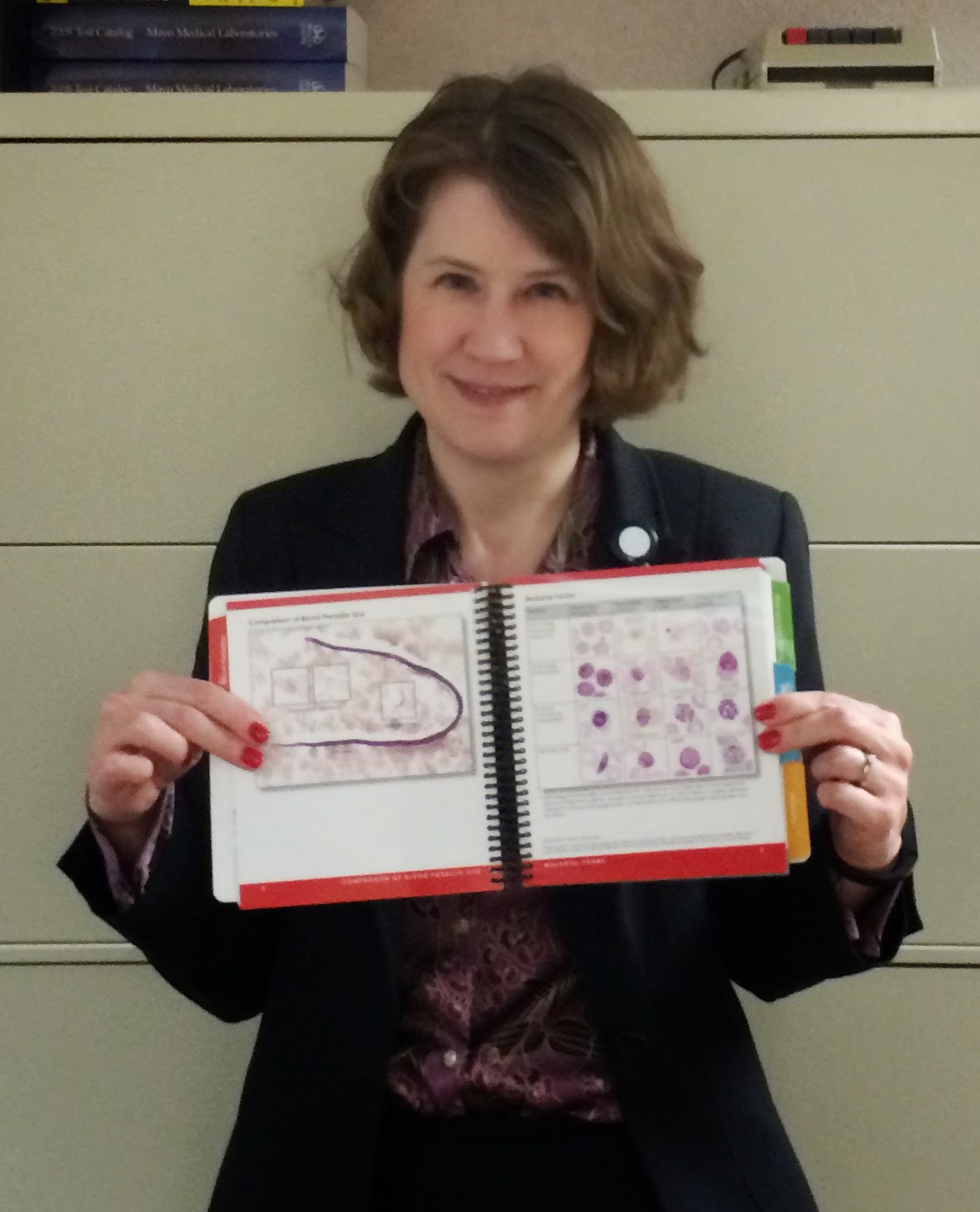 I'm pleased with how the bench guide turned out and think it will be useful for general reference at the bench or for boards preparation.  Here's a sample image from the benchguide: 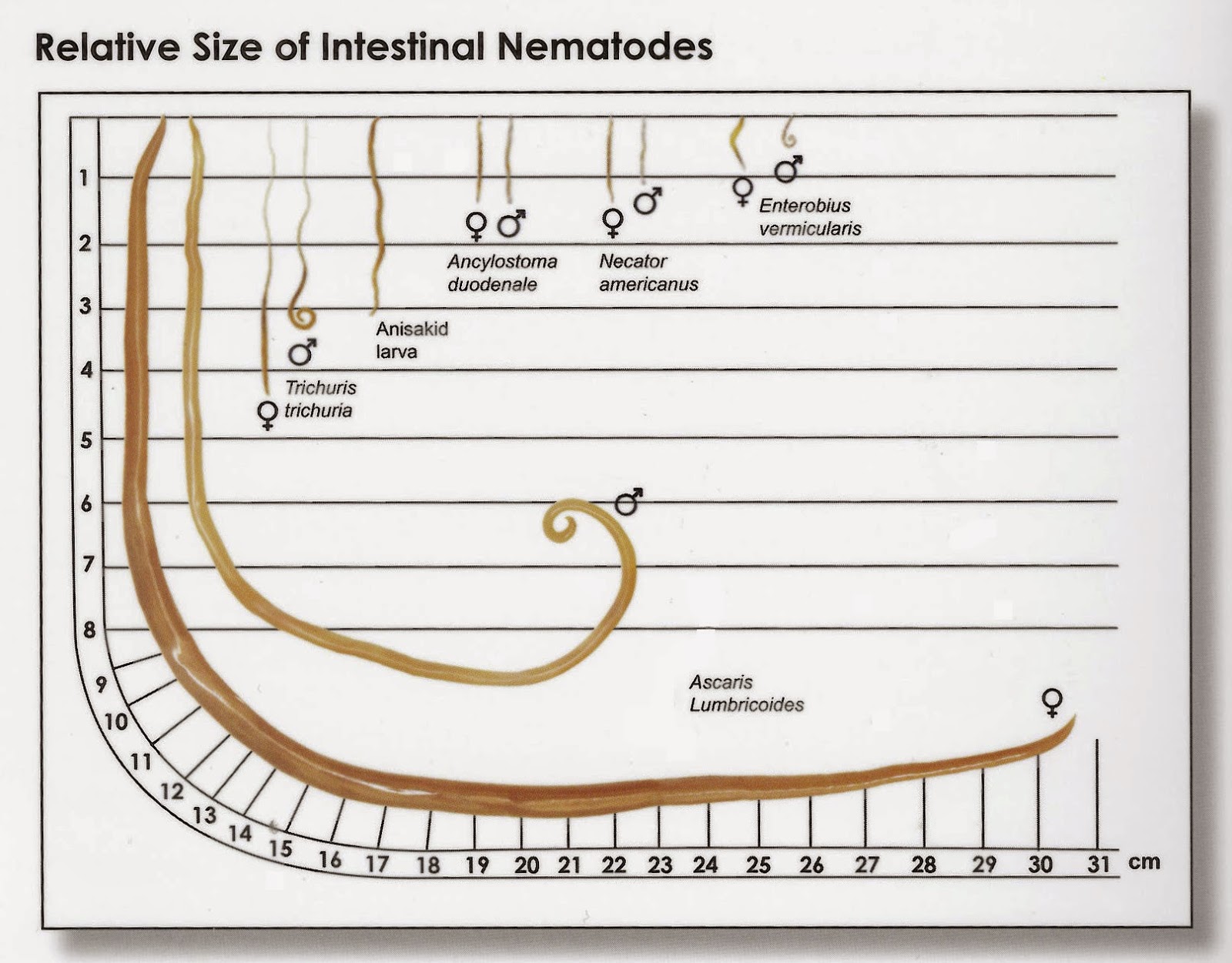 Posted by ParasiteGal at 5:51 PM 3 comments:

Happy Holidays to all of my readers!
Posted by ParasiteGal at 11:08 AM No comments:

The following were seen in Giemsa-stained peripheral blood films from an Indonesian man.  Identification? 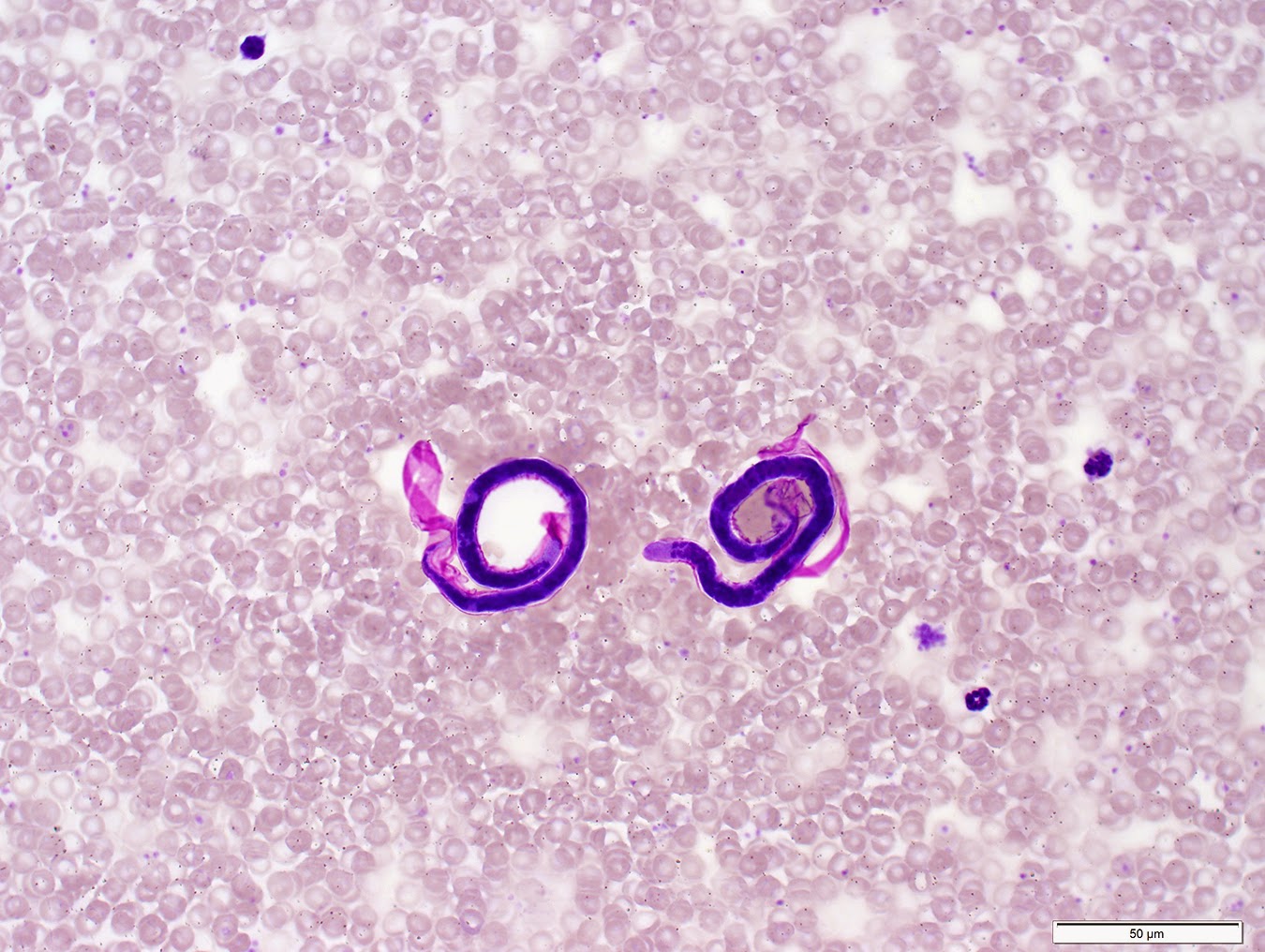 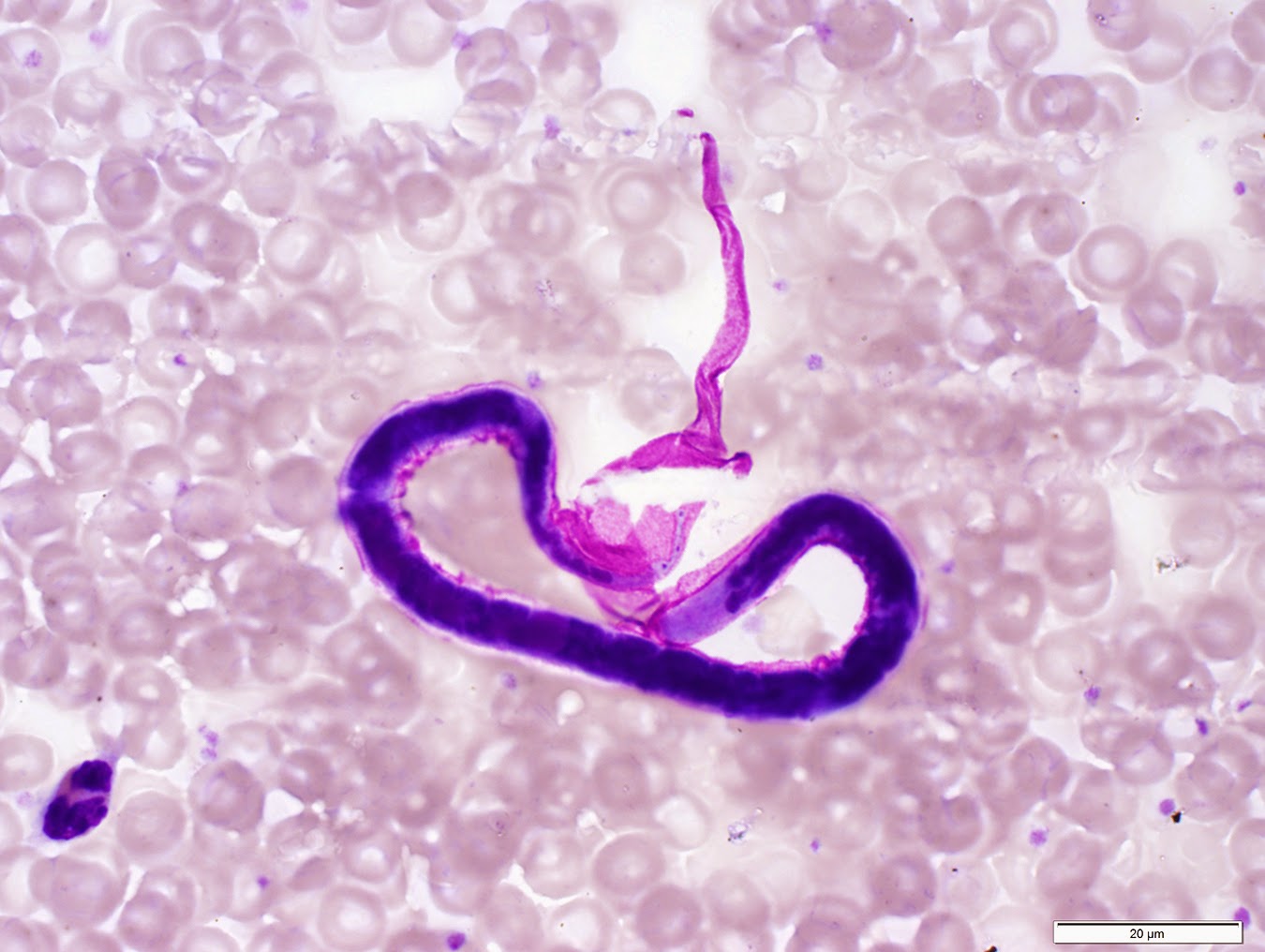 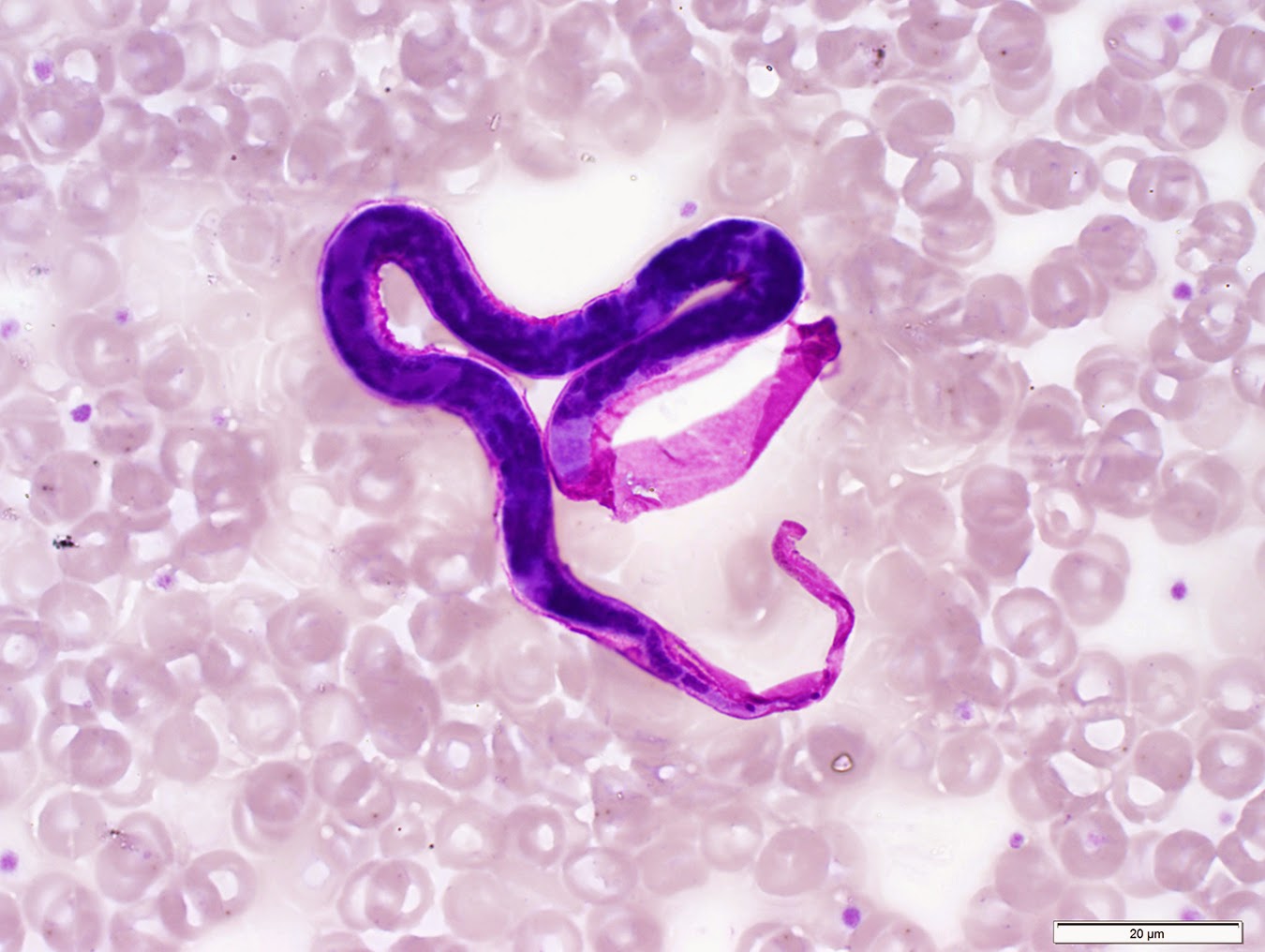 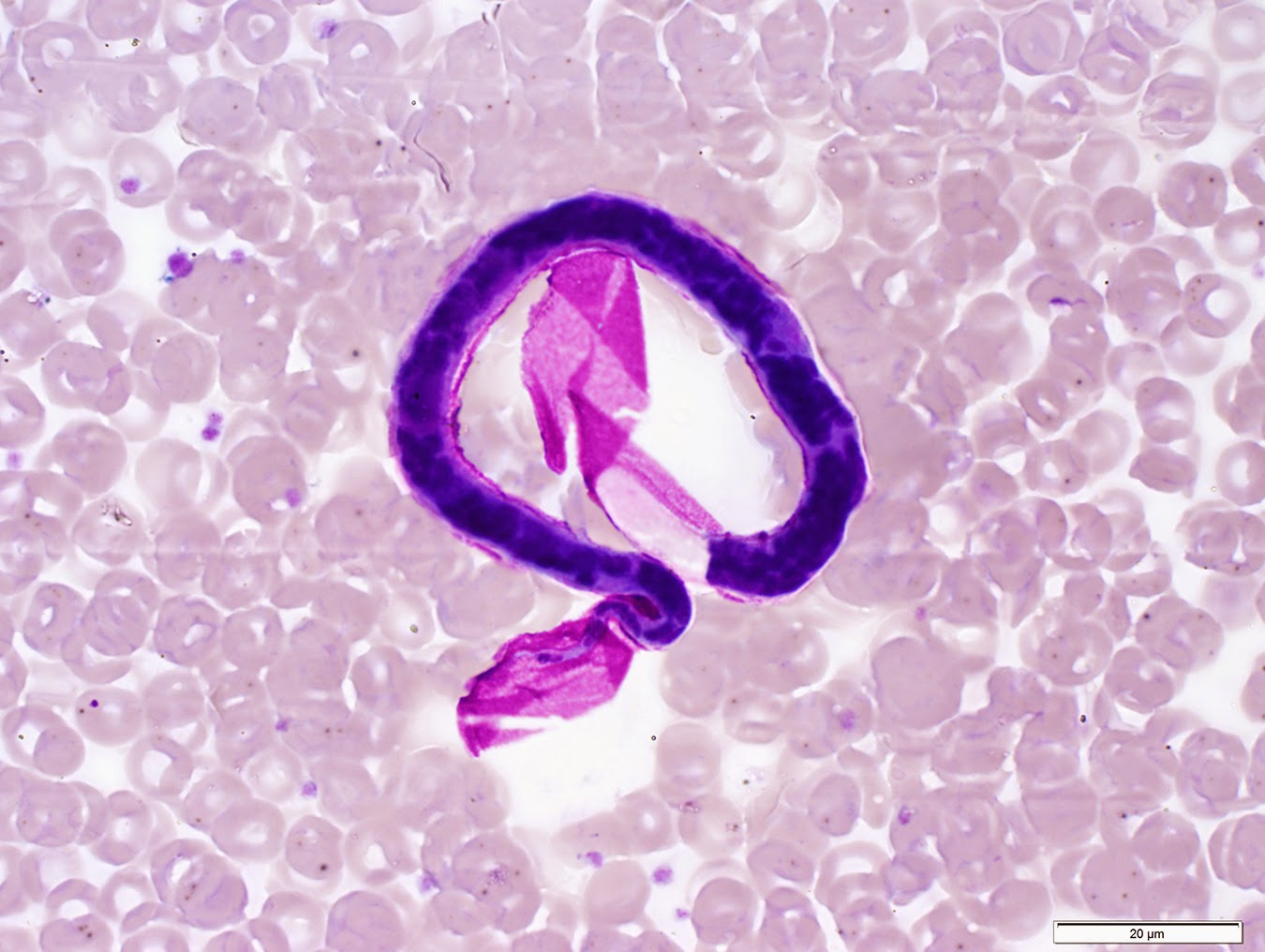 Posted by ParasiteGal at 5:27 PM 7 comments:

Thanks to everyone who wrote in - you all got this one right.  Shown are clearly sheathed microfilariae with a clear space between the terminal and subterminal tail nuclei (arrows below).  The deep pink color of the sheath is strongly supportive of B. malayi, although sometimes the sheath can be clear. 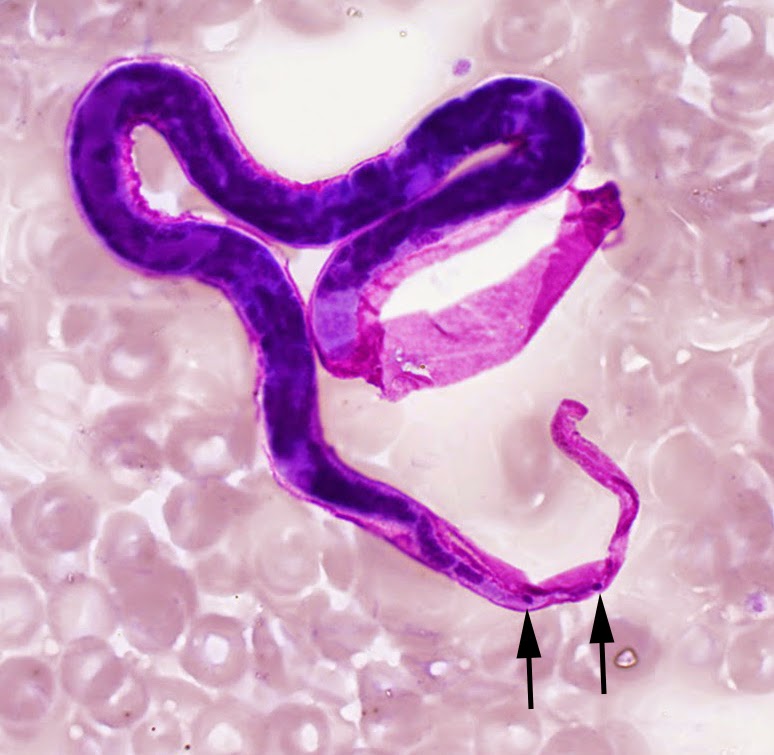 When a sheath is identified, then the 3 genera can be differentiated by the characteristics of their tail nuclei.  The tail of Wuchereria bancrofti is Without nuclei, the tail of Brugia is Bi-nucleated (or makes a ba-dump-a-dump pattern, a phrase courtesy of Heather), and finally, the nuclei of Loa loa "flowa flowa" to the tip of the tail.

Everyone has their own preferred way of learning things, so if these silly tips and tricks don't help you, feel free to disregard!
Posted by ParasiteGal at 5:48 PM No comments: