The following were seen in a stool specimen (wet preparation) from a 43 year old from the Philippines. They measure approximately 70-100 µm long by 55-64 µm wide.
(CLICK ON IMAGES TO ENLARGE) 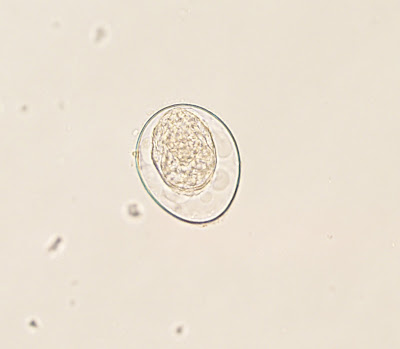 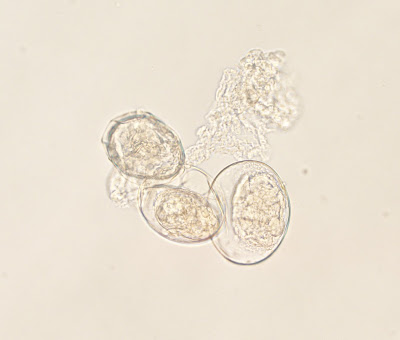 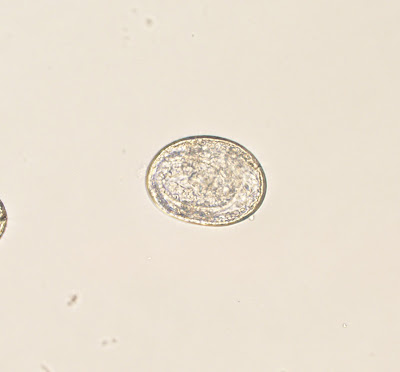 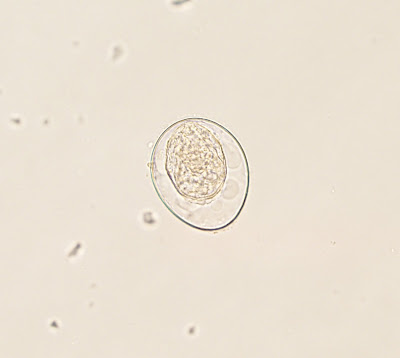 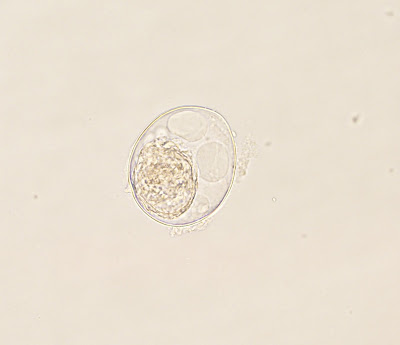 Identification?
Posted by ParasiteGal at 8:34 AM 4 comments:

The key to making the identification is recognizing the overall shape and size (oval non-operculate eggs that are too large to be hookworm), lack of internal hooklets (as would be seen in Hymenolepis nana and H. diminuta, and finally, the presence of a small, but distinct lateral rudimentary knob, as shown here: 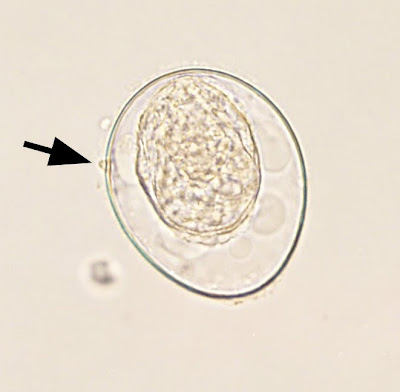 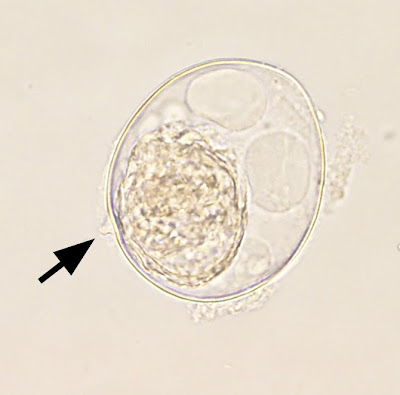 A rudimentary spine is not always visible on S. japonicum eggs, but the other features (size, shape, lack of hooklets) will still allow for a presumptive diagnosis.
Posted by ParasiteGal at 2:41 PM No comments:

The following was identified in a package of frozen cod fillets purchased at a chain grocery store. (CLICK ON IMAGES TO ENLARGE) 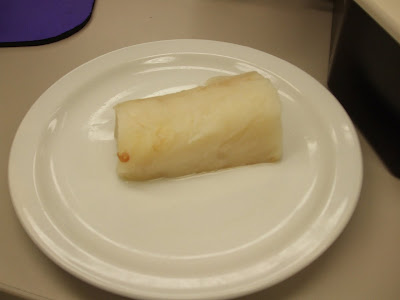 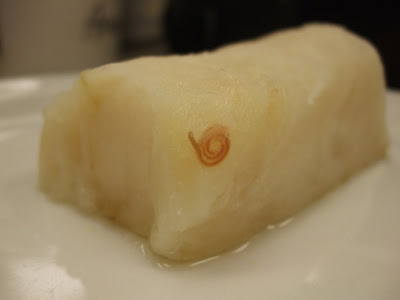 Identification?
Does this finding pose a risk to someone who consumes this fish?
Posted by ParasiteGal at 8:56 AM 4 comments:

To see this worm in its "cooked" state, take a peak at my previous posting HERE

These worms are nematodes in the family Anisakidae. They parasitize fish (most commonly cod, salmon, herring, mackerel, haddock, pollock, and halibut) and squid and may be transmitted to humans who eat the undercooked or raw contaminated flesh. Ingestion of the larval anisakids may cause transient human infection and possible allergic reactions in susceptible individuals. Pseudoterranova were previously known as Phocanema and Terranova (as mentioned by Anonymous).

In the infected fish, P. decipiens are brownish in color, while Anisakis spp. are red-pink. Both are typically seen in the distinctive watch-spring coil shape, and are 1.5 - 2 cm long when uncoiled. For definitive identification, examination of internal structures, including the esophagus, are necessary.

To answer the second part of the question "Does this finding pose a risk to someone who consumes this fish?":

Anisakid larvae are killed by freezing, so this worm should be non-infectious if it had been thoroughly frozen. The FDA recommends that all shellfish and fish intended for raw consumption be blast frozen to -35°C or below for fifteen hours or be frozen at -20°C or below for seven days. Anisakiasis can also be easily prevented by adequate cooking at temperatures greater than sixty degrees (until the flesh is white and flaky). It is important to note that salting and marinating will not necessarily kill the parasites.

Bon appetite!
Posted by ParasiteGal at 7:42 AM No comments:

The following were seen by a patient in his stool and sent to the lab for identification. How would you sign this case out? What advice should be given to the patient?
(CLICK ON IMAGES TO ENLARGE) 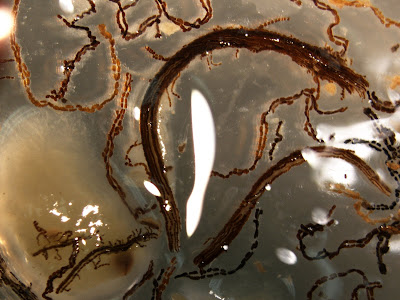 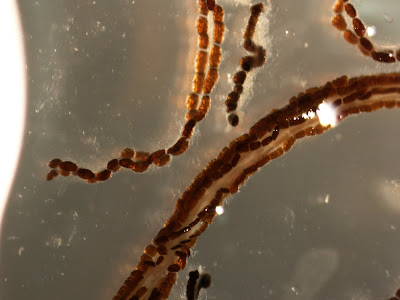 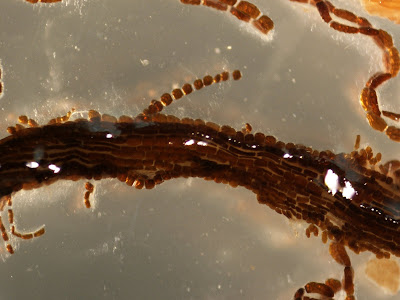 Posted by ParasiteGal at 8:18 PM 9 comments:

Congratulations to everyone who wrote in - you all got this one right! Alasdair rightly said "Is that not just plant material? The beginnings of parasitosis of the delusional variety if it is. Advise the patient not to worry."

While these structures are commonly referred to as banana 'seeds', the Cavendish bananas that are most often sold in grocery stores do not actually develop seeds. They have been bred to be sterile. However, each aborted ovum has a vascular network consisting of xylem strands and associated cells containing astringent tannins. Upon ripening, the tannins polymerize into a semi-solid mass called 'tannin bodies' which fill the cells. The tannin bodies sometimes incorporate red-brown pigments from polyphenol oxidase activity (like the browning reaction in cut apples) as the cells age, and can therefore be seen as the red-brown bodies in this case. They are associated with the xylem strand which give them a chain-like appearance.

Anonymous Anonymous also commented "They resemble arthroconidia still stuck together. Is there a reference book for such things?"

There are a few references out there you might find helpful.

In my opinion, the best reference is the "Atlas of Human Parasitology" by Ash and Orihel which has a nice section on parasitology mimics and artifacts (although it incorrectly calls the structures in the case banana 'seeds'). These authors also have another excellent atlas called "Parasites in Human Tissues" which has a section on parasite mimics. These 2 atlases are a MUST-have for those interested in parasitology.

Another book that has some nice images is "Atlas of Microscopic Artifacts and Foreign Materials" by I-Tien Yeh.

Finally, here is a link to a short paper I wrote a while back that shows the histologic appearance of a peanut, blueberry, lentil, and hotdog: Pritt et al.
Posted by ParasiteGal at 8:40 AM 3 comments:

A section of small intestine was resected from a 50 year old man from China with widespread malignancy. What infection is shown here?
(CLICK ON IMAGES TO ENLARGE) 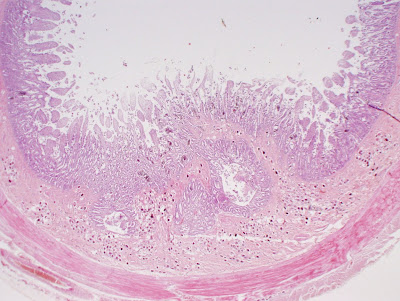 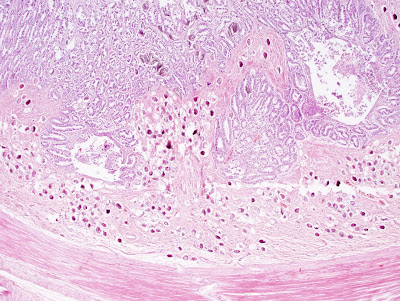 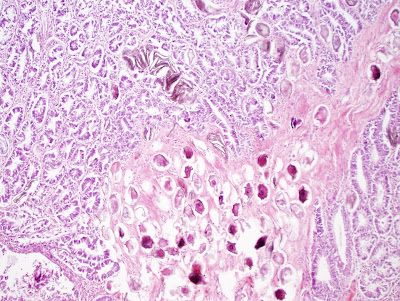 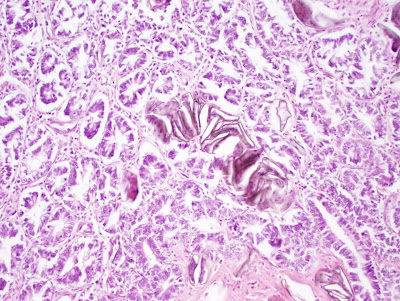 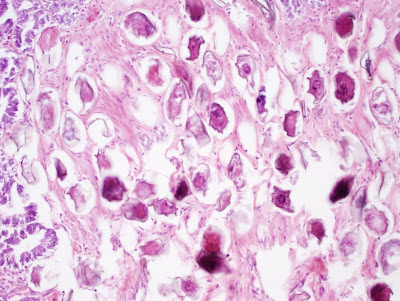 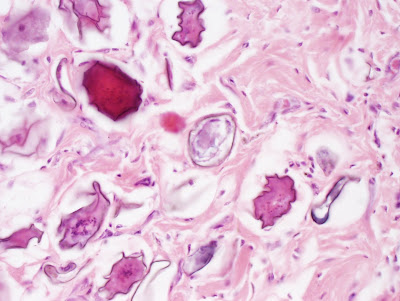 Given the geographic origin of this individual, what is/are the most likely species involved?
Posted by ParasiteGal at 7:45 AM 2 comments:

Answer: Schistosomiasis
As Anonymous (x 2) point out, the geographic distribution is most consistent with infection due to Schistosoma japonicum. This is supported by the fact that no obvious spines are visible on any of the eggs seen. However, I should point out that seeing spines of S. mansoni or S. hematobium in tissue is often difficult due to the fact that the eggs are cut in various planes and are semi-collapsed, so that the egg outline is jagged and irregular.
Posted by ParasiteGal at 8:14 PM No comments: