The following were submitted to the lab for identification in a small jar of formalin.  They measure approximately 2 mm in greatest dimension. No history was provided.
Identification? 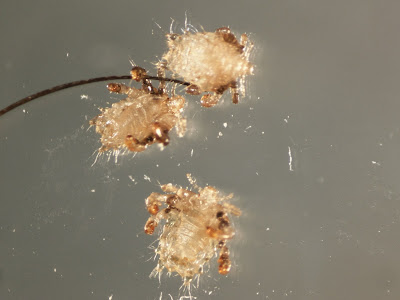 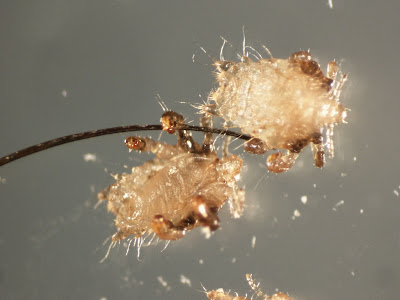 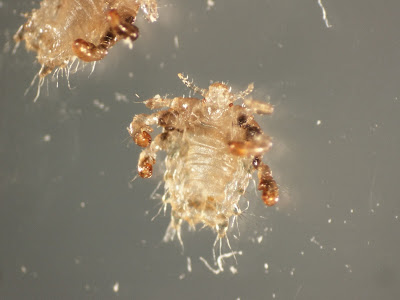 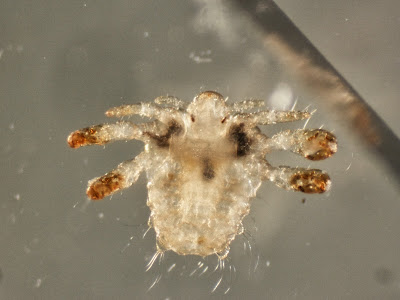 Posted by ParasiteGal at 4:05 PM 8 comments:

Anon points out that "Pthirus" is correct rather than "Phthirus;" however the only reference I could find on this was Wikipedia.  The CDC DPDx Web page uses "Phthirus" as does many publications on PubMed.  Does anyone have a different reference for me on the correct spelling?

Another interesting comment that came up on this post was how this little arthropod may be at risk of extinction due to the widespread practice of genital hair shaving.  I've heard this several times now from a variety of popular media sources, but haven't seen any published studies on this phenomenon.  Also, we seem to still get a good number of these cases in my lab.  Does anyone know of any studies to back this up? It's definitely an interesting hypothesis!

Thanks for all of the interesting comments, as always.
Parasite gal
Posted by ParasiteGal at 6:13 PM No comments:

The following case was generously provided by Emily Patterson.

These objects were found within a portion of resected intestine in a patient with small bowel obstruction. 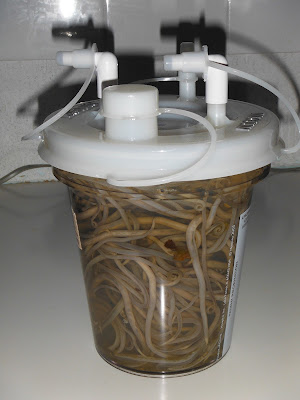 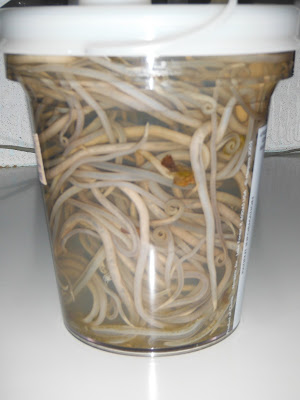 Although I didn't show you a close up of the worms in this surgical container, the size and gross morphology are most consistent with the large nematode Ascaris lumbricoides.  Small bowel obstruction is a dreaded complication of Ascaris infection, made possible by the large size of the worms and smaller diameter of the small bowel.  Hans found a link to a very interesting (and somewhat disturbing) YouTube video of a surgery for obstruction due to ascariasis:
http://www.youtube.com/watch?v=N4BlCBylUU0

BHS mentions that Ascaris suum could also be in the differential if the patient has exposure to pigs.  This brings up an interesting conundrum.  The genomic and proteomic profiles of A. lumbricoides and A. suum are nearly identical and some argue that the two species actually represent a single organism.  However, like the head and body louse, the 2 organisms seem to have different ecological niches, and it is therefore hard to argue that there are no significant differences between them.  Fortunately the treatment is the same regardless of the species identification.

Posted by ParasiteGal at 2:44 PM No comments:

The following were seen in the stool of a 15 year old autistic female with long standing constipation and were submitted for parasitic identification. The objects measure several centimeters in length. 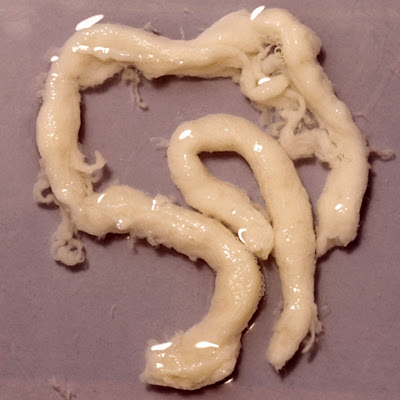 How would you sign this case out?
Posted by ParasiteGal at 5:39 PM 5 comments:

Mucus casts may be seen in a variety of gastrointestinal disorders and can present as small ragged ropes of mucus or long thicker ropes (as seen in this case).  The following images show the spectrum of mucus casts that may be observed in stool: 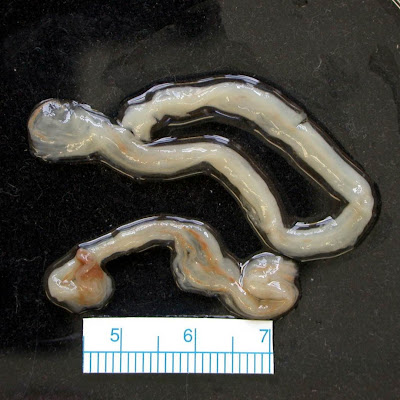 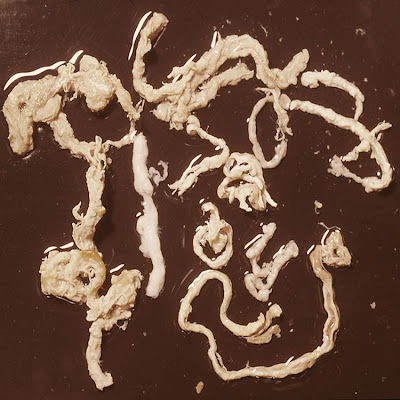 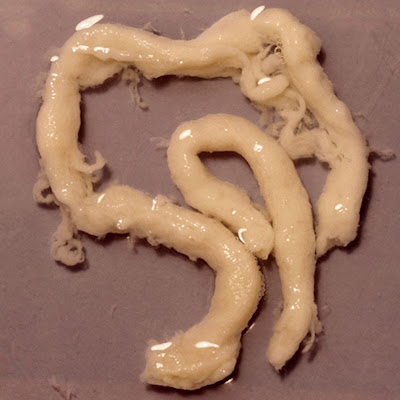 All of the viewers correctly noted that these objects were not a parasite, despite their superficial resemblance to various worms.  The keys to identification are the irregular diameter and shape, lack of distinct mouthparts or tail, and ease with which the strands can be pulled apart.  In contrast, actual helminths have a more resilient smooth external cuticle and defined head and tail structures.
Posted by ParasiteGal at 3:50 PM 48 comments:

This weeks case was generously donated by Florida Fan.  The following worm was found in the feces of a 15 month-old boy who is in otherwise good health.  The worm is approximately 10 cm in length and has a tightly coiled appearance: 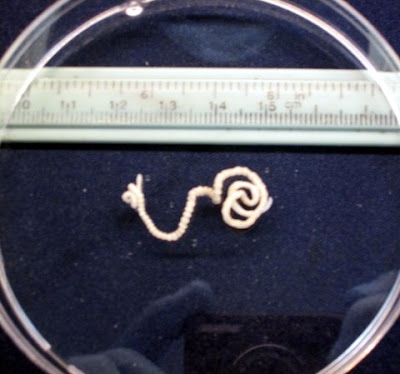 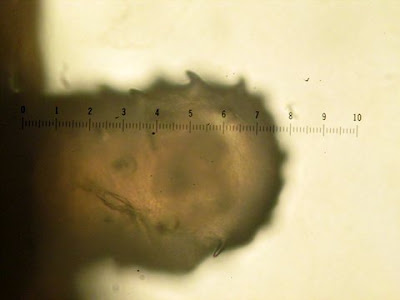 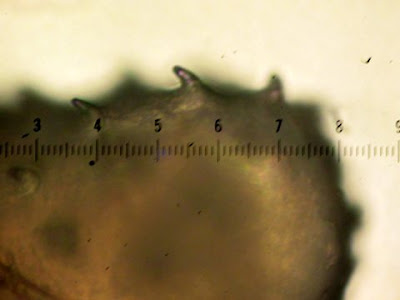 Flattening the proboscis between 2 slides and focusing up and down in different planes showed the individual hooks on the proboscis: 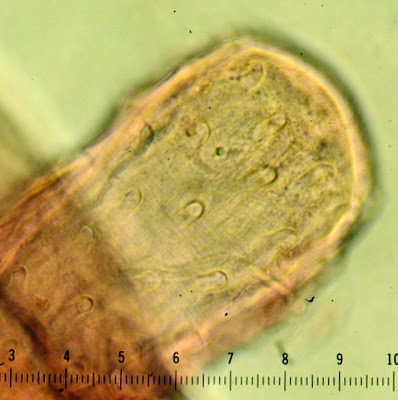 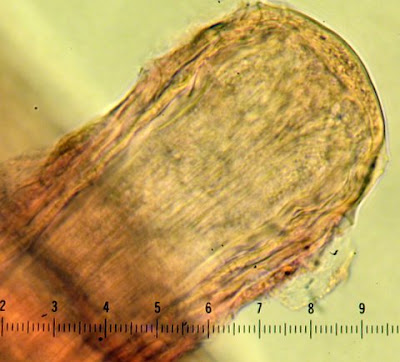 Individual eggs can be seen inside the gravid female: 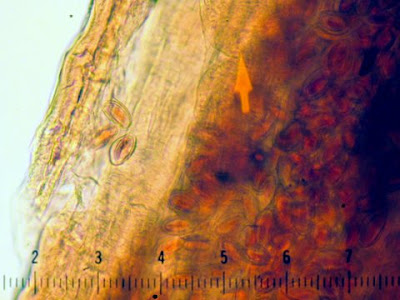 Here are individual eggs  retrieved from the worm, measuring between 75 - 90 microns in length: 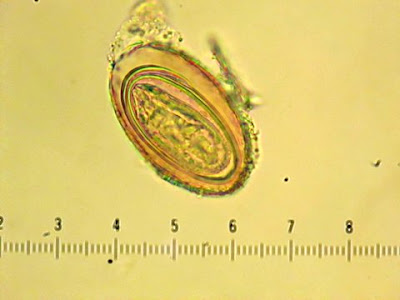 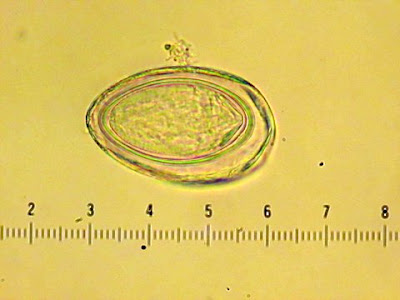 Identification?
Posted by ParasiteGal at 11:16 AM 4 comments:

You can make the diagnosis by the characteristic appearance of the adult female with its protruding proboscis containing spiral rows of spines (the 'thorns') and the relatively large eggs with in internal larva (called an acanthor).  By focusing up and down, you can often make out rostellar hooks. 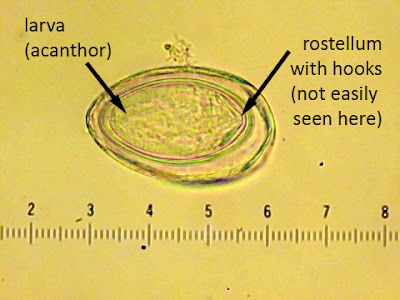 Acanthocephaliasis can be very painful in humans as the worm embeds its spiny proboscis into the wall of the intestine - ouch!

Posted by ParasiteGal at 10:09 AM No comments: