The following were seen in prostatic secretions from a man with chronic prostatis.  Diagnosis?

Answer:  Flagellate protozoa, consistent with Trichomonas vaginalis or Pentatrichomonas hominis (a closely related GI commensal).  The history of chronic prostatitis and location of the organism in prostatic secretions is most consistent with infection with the T. vaginalis, and this diagnosis was later confirmed by making permanently mounted and stained preparations of the organisms.

On wet prep, both organisms demonstrate a characteristic 'jerky' non-directional motility, which can be observed in the videos from this case.  P. hominis trophozoites have similar morphology to those of T. vaginalis,  but are typically smaller and the flagellum that forms the outer edge of the undulating membrane continues past the posterior end of the trophozoite as a free flagellum.

Posted by ParasiteGal at 9:32 AM No comments:

A child presented with rapid onset of headache, confusion, and mental status changes after spending the weekend swimming in a warm fresh water lake.  A lumbar puncture was performed and the following structures were seen in a Giemsa-stained cytospin preparation of CSF (CLICK ON IMAGES TO ENLARGE): 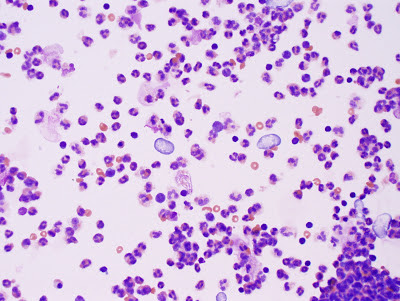 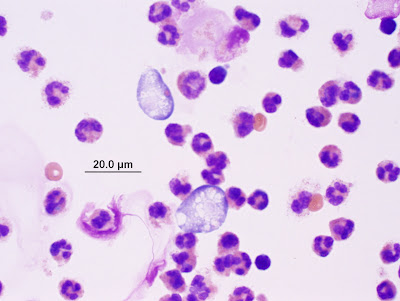 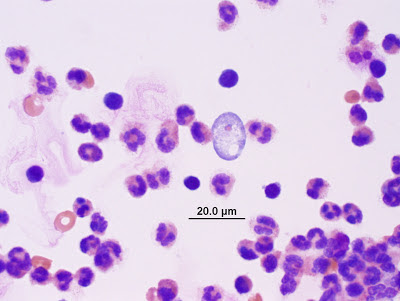 Unfortunately, the child quickly became obtunded and was declared brain dead within 24 hours of presentation.  An autopsy was performed, which showed the following: 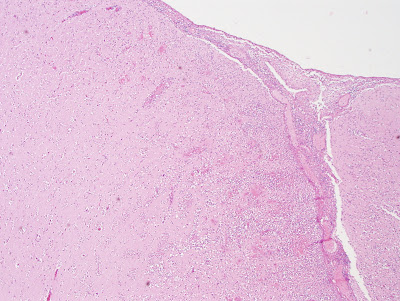 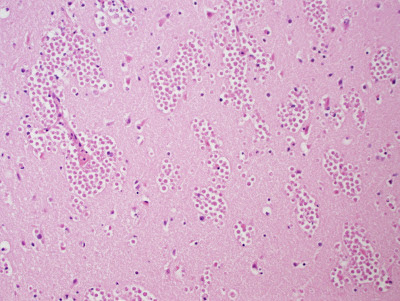 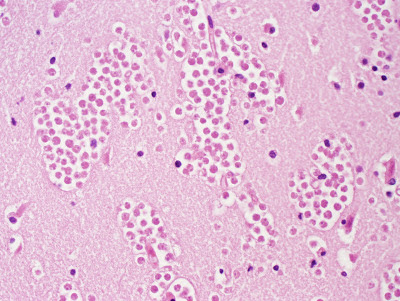 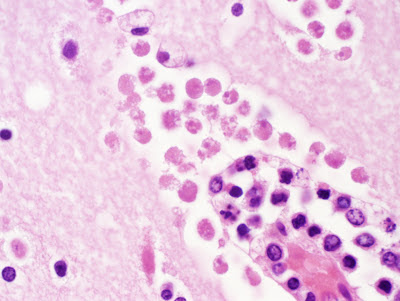 Diagnosis for this tragic case?﻿
Posted by ParasiteGal at 5:43 PM 5 comments: 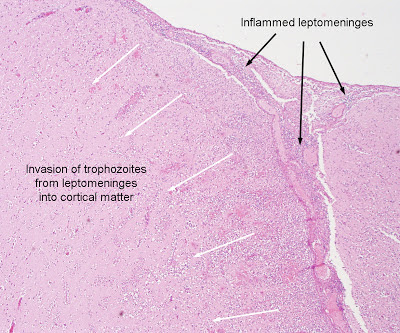 The trophozoites have a relatively small nucleus and large central karyosome, which allows them to be differentiated from human cells such as macrophages. 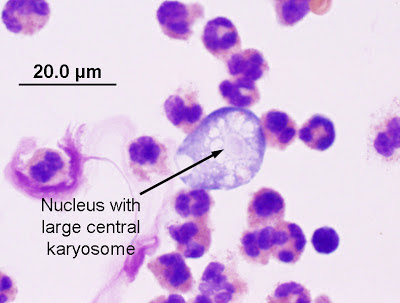 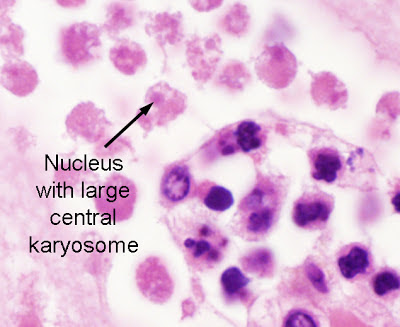 Similarly, the chromatin pattern with large karyosome differentiates the trophozoites of the free-living amoebae from those of Entamoeba histolytica (a rare cause of amebic CNS infection).

Although Naegleria fowleri has cyst, trophozoite, and flagellated forms in nature, it exists only in the trophozoite stage in humans, unlike the other free-living amebae (Balamuthia mandrillaris and Acanthamoeba spp.) which also have cyst forms in humans.

In this case, the characteristic trophozoites, lack of cyst forms, location in the meninges, and classic clinical history all support the diagnosis of PAM.
Posted by ParasiteGal at 10:45 AM No comments:

The following objects were seen in a Pap-stained ThinPrep-preserved specimen of pleural fluid in a 50 year old male with chest pain, right fluid collection, and a lung mass. 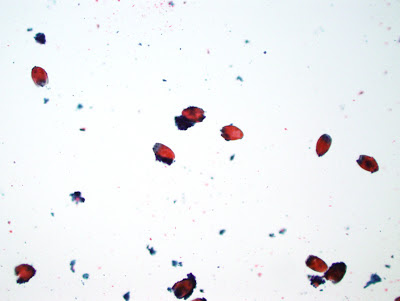 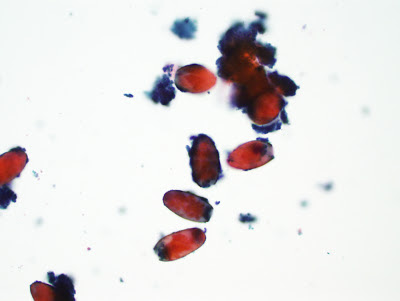 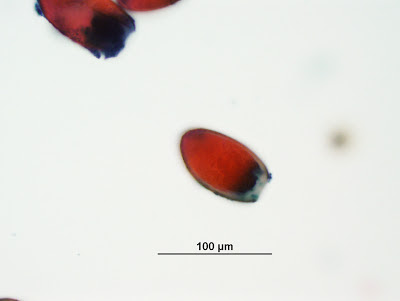 Posted by ParasiteGal at 9:49 PM 5 comments:

The identification can be made by the characteristic operculate eggs, moderate size (90-100 microns in length), thin shell, and lack of spines.  In some of the images, you can appreciate small "shoulders" or bumps on either side of the opercular opening, another characteristic feature of Paragonimus ova. 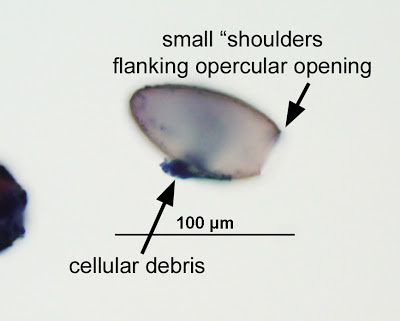 Paragonimus westermani is the most common species worldwide to infect humans, but other species, such as P. kellicotti can infect humans as well.  It is not possible to tell the different species apart by the eggs alone, and therefore, the best identification is "Paragonimus sp."
Posted by ParasiteGal at 5:27 PM No comments:

The following case was generously donated by Dr. Sandeep T from Bangalore, India.

The patient is a 27 yr old lady with complaints of puffy ankles and face and a loss of appetite. On examination, she was pale and had pedal edema extending up to her knees bilaterally. Laboratory investigations showed anemia with a normal WBC count. The preliminary diagnosis was renal insufficiency, but further questioning revealed intermittent diarrhea and one episode of vomiting a 'worm'.

Therefore, endoscopy was performed which revealed the following red brown parasites attached to the wall of intestine, extending from the duodenum to the colon.


Some of the smaller parasites were extracted and are shown below.  They ranged in size from 2 to 3.5 cm in length by 1.5 cm in width. 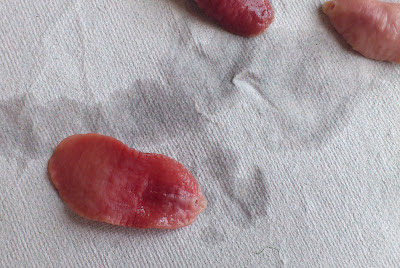 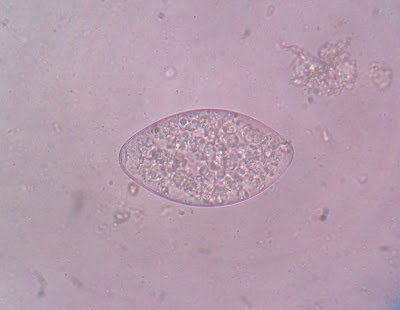 The first step in making the diagnosis is recognizing that these objects are flukes - flat 'leaf-like' worms (member of the Platyhelminths) with an oral and ventral sucker as shown below.  The oral sucker isn't fully demonstrated in the photo. 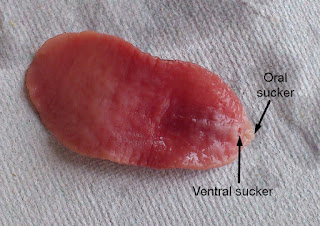 The size of the fluke is also important.  As Lukus points out, the flukes that were obtained at microscopy are on the small side for F. buski (2 to 3.5 cm in length), but mature forms are larger (up to 7.5 cm!).  I believe we can see some larger flukes in the endoscopic video.

Hans points out that there are also other intestinal flukes such as Metagonimus yokogawai and Heterophyes heterophyes to consider, but that they are much smaller in size and wouldn't be in the differential in this case.  Also, the larger thin-walled, operculated eggs (without a shouldered operculum) fits nicely with F. buski.

Of note, edema is a common presentation in individuals with heavy infection, as seen in this case. Other manifestations include diarrhea, fever, abdominal pain, and intestinal obstruction.

Posted by ParasiteGal at 8:58 PM No comments:

The object was removed by open cystolithotomy and sent to the lab for bladder stone analysis.  8.7 grams of material was removed from the 'stone' and analyzed (see below, image courtesy of Dr. Tom Moyer).  It was found to be composed of 10% uric acid and 90% ammonium urate. 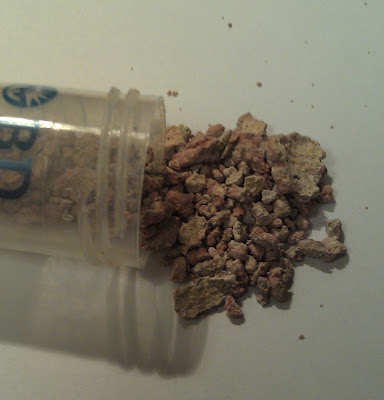 More surprising was the object discovered in the center of the 'stone' (shown below), which was immediately sent to the parasitology lab. 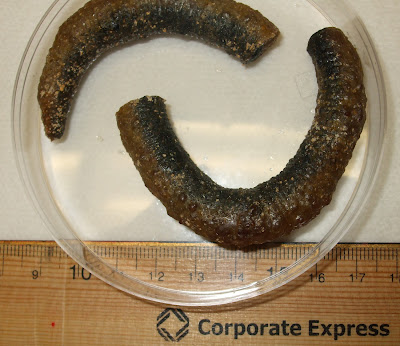 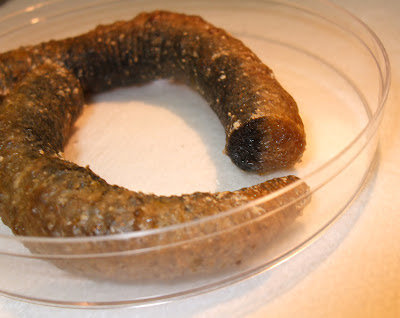 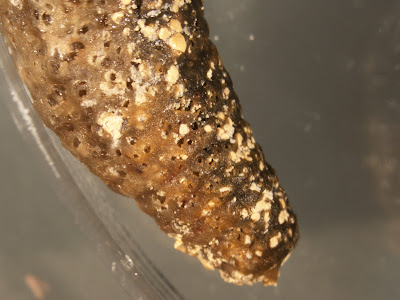 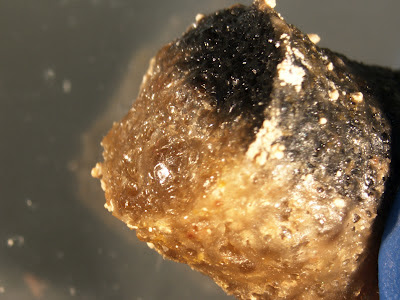