As Arthur notes, the Entamoeba ladies include Entamoeba histolytica and E. dispar. There are also E. moshkovskii and E. bangladeshi - all morphologically indistinguishable of course! The smaller Entamoeba was E. hartmanni.

The cupcakes were amazing - all courtesy of our Clinical Microbiology fellow, Dr. Rachael Liesman. As Yasir and Florida Fan mention, the cupcake with the pretzel stick represents Dracunculus medinensis, the Guinea worm, being pulled from a wound and wrapped around a stick. The equally clever cupcake right above this is a wound full of maggots. Yum. (they were actually delicious cupcakes). 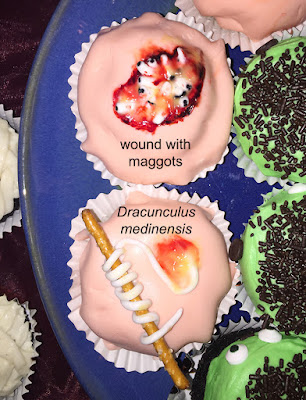 Thanks for all of the great comments.
Posted by ParasiteGal at 4:08 PM 3 comments:

This week's case was generously donated by Dr. Jane Hata. Several motile structures were seen in a bronchoalveolar lavage from an elderly woman with rapidly progressing shortness of breath and edema. She had a history of chronic heart failure and was receiving immunosuppressive medications for a renal transplant some years prior. 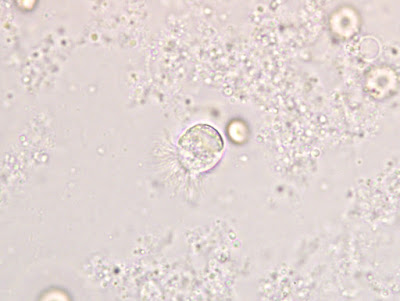 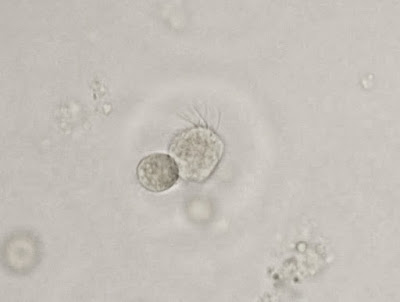 This case demonstrates a convincing parasite mimic that is commonly seen in deep respiratory specimens: detached and intact cilia from respiratory epithelial host cells. The cilia on these structures will remain motile long after the cells are sloughed from the human host and thus resemble ciliated or flagellate parasites such as Balantidium coli and Trichomonas tenax. However, the morphologic features allow for clear differentiation of these objects. Detached ciliary tufts (DCTs) are relatively small (5-15 micrometers in diameter), the cilia are present in a dense mat attached to a terminal plate, and the cilia beat in a rhythmic motion without propelling the object forward.

In comparison, Arthur Morris notes that "B. coli is very (very!) large in its ciliated trophozoite form" (40-200 micrometers) "and is covered in short cilia rather than a localized patch of long cilia" (as seen in this case). "It also has a distinct peristome and kidney-shaped macronucleus which is not present here." The cilia on B. coli cause it to move in a 'rotary' or 'boring' motion.

Similarly, Trichomonas tenax is easily differentiated from DCTs by morphology. It has only 4 apical flagellae (rather than a tuft of dense cilia) and demonstrates a 'jerky' motility pattern.

Of note, the free-living amebae that infect humans (e.g. Naegleria fowleri) do not have a flagellate form in the human body and therefore should not enter the differential diagnosis when DCTs are seen. Also, Lophomonas blattarum is a parasite of cockroaches and has not been convincingly described from humans; instead, it has been misdiagnosed in cases where DCTs were observed.

HERE is another case from my blog, showing Papanicolaou-stained DCTs.

Also, HERE is an article (in Chinese) that discusses how previously-reported cases of L. blattarum infection were actually cases of misidentified bronchial ciliated epithelial cells.

Posted by ParasiteGal at 2:43 PM No comments:

The following structures were seen in a Papanicolaou-stained sputum specimen from a patient with chronic obstructive pulmonary disease. Identification? 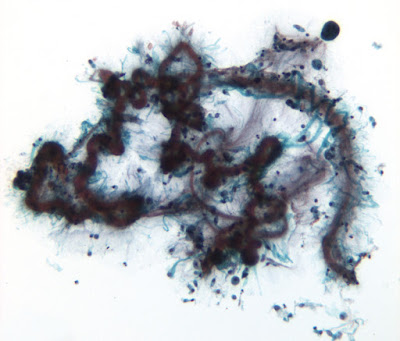 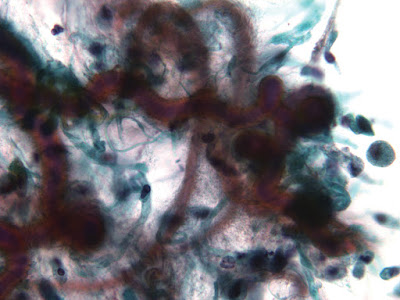 Posted by ParasiteGal at 9:05 AM 5 comments:

Answer:  Not a parasite; Curschmann spirals

As nicely described by Anon, Curschmann spirals are spiral-shaped mucous plugs that are commonly seen in patients with asthma and other chronic obstructive lung diseases. They are formed when thick mucous accumulates in the patient's small airways and forms a plug or cast of the airways. These casts can then released into lower respiratory specimens such as sputum and bronchoalveolar lavage (BAL) fluid and be seen on cytology and microbiology specimens. Even though they can superficially resemble worms, they are easily differentiated by their lack of internal structures, long irregular shape, and variable diameter.

Posted by ParasiteGal at 8:04 PM No comments:

This week's case is a Giemsa-stained sputum specimen from a patient with abrupt onset of productive cough and expectoration of "salty-tasting" fluid. Images are shown at 400. and 1000x. Identification? 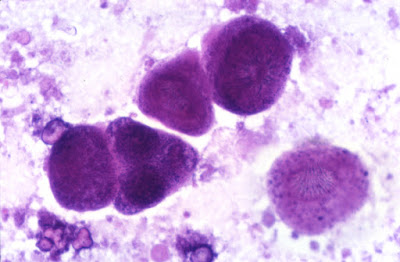 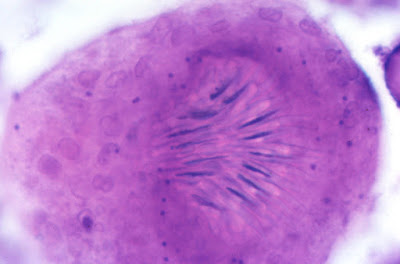 Posted by ParasiteGal at 6:01 PM 7 comments: 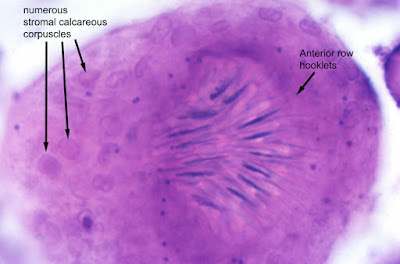 As many readers mentioned, this is most likely to be echinococcosis due to Echinococcus granulosus, since this is the most common species to infect humans. Yasir correctly notes that E. multilocularis rarely infects humans and almost exclusively involves the liver rather than the lungs.