A Sudanese refugee was seen for progressive confusion, daytime somnolence and personality disturbances. Despite treatment, he died and an autopsy was performed.  Sections of brain revealed the following: 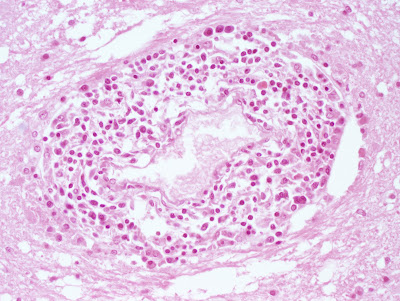 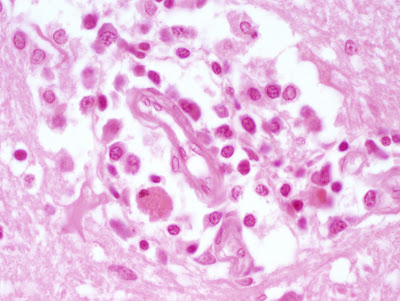 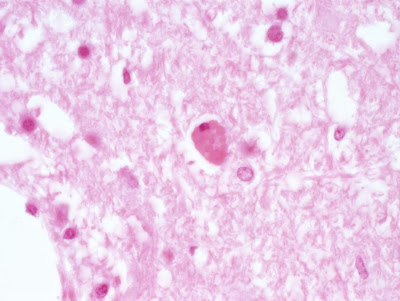 A peripheral blood smear obtained prior to death showed the following: 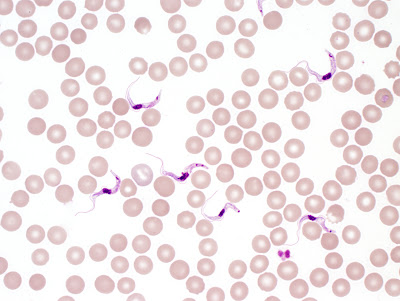 Diagnosis?
What is the object seen in image 3 (also present in image 2)?﻿
﻿
Posted by ParasiteGal at 8:24 AM 5 comments:

It is not possible to tell the 2 subspecies of Trypanosoms brucei apart microscopically, but the origin of the patient (Sudan) would be consistent with East African trypanosomiasis due to T. b. rhodesiense.

The flagellated form of T. brucei (called trypomastigotes) are typically seen in peripheral blood, and in late stage disease, in CSF.  They can be differentiated from the similar-appearing T. cruzi trypomastigotes by the small size of their kinetoplast (arrows, below). 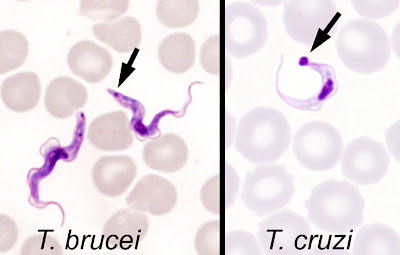 Occasionally, ﻿trypomastigotes of other zoonotic organisms such as T. rangeli can be transiently present in the blood of humans, although they are not usually associated with disease.  These trypomastigotes can be differentiated from human pathogens by their morphologic features (e.g. position of the kinetoplast) and geographic location of acquisition.

During the meningoencephalic stage, tissue biopsy typically shows a lymphoplasmacytic perivascular infiltrate containing plasma cells engorged with immunoglobulin.  These engorged plasma cells are called "Mott" or "morula" cells.  Although they are often seen with meningoencephalitic trypanosomiasis, they are not definitive for this disease and can be seen in other conditions. 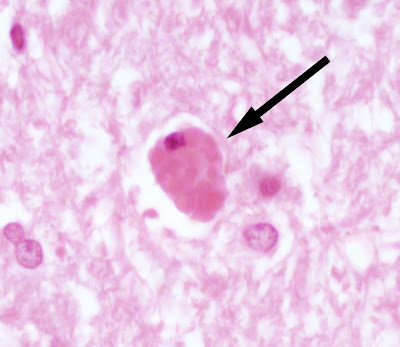 Of interest, the term "Mott cell" is named after Dr. F. W. Mott, who described these cells in the brains of monkeys with trypanosomiasis.  However, he used the term "morula cell," and therefore these 2 terms are used interchangeably.  More interesting history about this HERE.

Thanks to everyone who wrote in about this interesting case!

Posted by ParasiteGal at 11:16 AM No comments:

This week's case is just a fun identification.  (Hint, these objects were obtained at the local hospital pharmacy...) 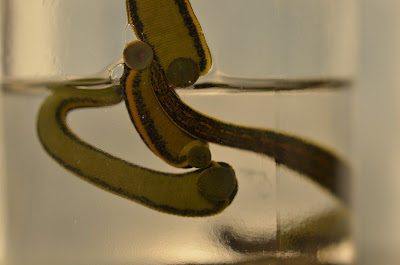 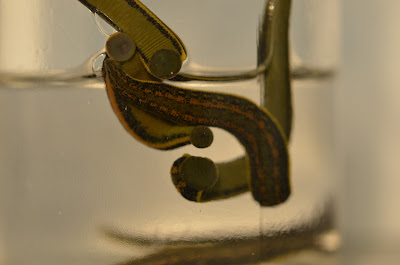 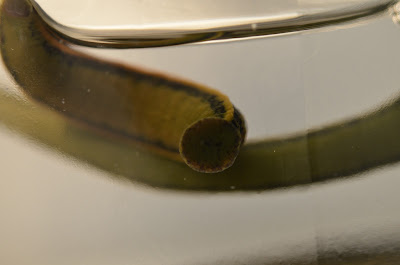 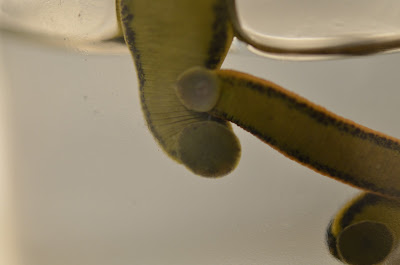 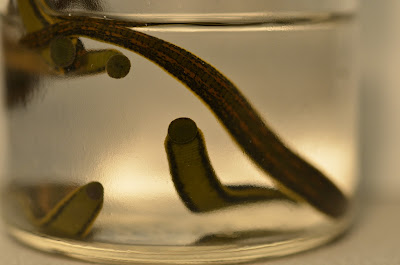 Questions:
1.  What are they used for in the health care setting?
2.  Which bacteria is associated with them?
Posted by ParasiteGal at 2:19 PM 7 comments:

Today, leeches are not used for 'balancing humors' but instead to to reduce venous pooling of blood in delicate surgeries such as reconstructive and reattachment surgeries.  Medicinal leeches secrete a number of anticoagulants in addition to hirudin which facilitate blood flow and therefore promote wound healing.

Note that leeches are annelids and not trematodes, despite their superficial resemblence.  You can appreciated their segmented nature in this photograph: 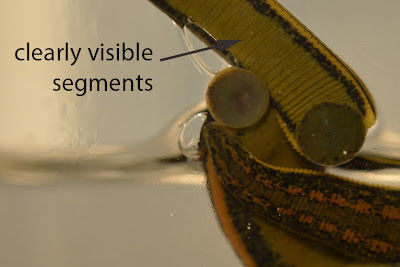 Medicinal leeches carry Aeromonas hydrophila in their gut. Therefore, it is important to give the patient antimicrobial prophylaxis when prescribing medicinal leech therapy.
Posted by ParasiteGal at 8:04 AM No comments: 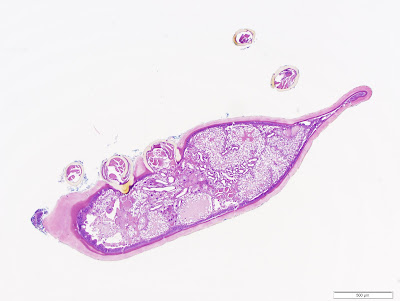 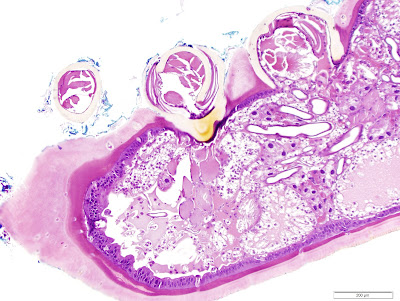 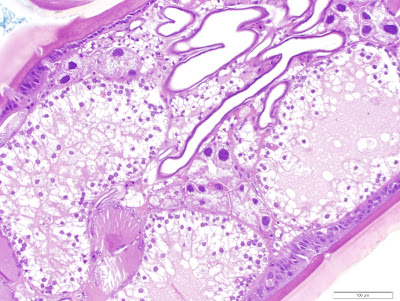 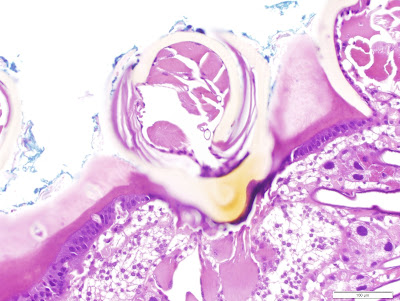 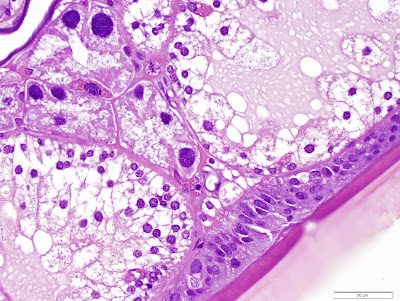 Answer:  Arthropod, most likely a hard tick given the presentation and gross description

This case is somewhat reminiscent of Case 251 in which an object that could have been identified by macroscopic examination was submitted for histologic processing, therefore making the identification extremely difficult. However, there are still features present that allow this 'object' to be identified as an arthropod, as shown in the photo below (CLICK ON IMAGE TO ENLARGE): 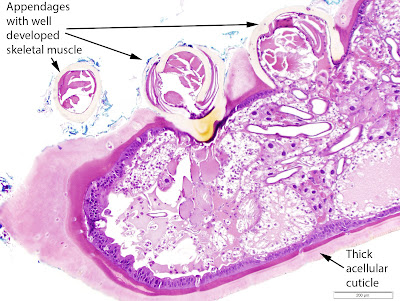 You'll note that the features in this case are very similar to a previous case of an embedded tick that was sectioned by histology (Case 83).

Here is a poem by Blaine Mathison to go with all of these types of cases!

As microbiologists, we can help our physicians by encouraging them to submit possible arthropods to the microbiology lab rather than to surgical pathology, and also ask our histology labs to send these types of specimens to microbiology rather than sectioning them.  As I've mentioned before in previous posts, the CDC also provides an excellent e-consult service with a <24 a="" available="" expertise="" great="" hour="" href="http://www.dpd.cdc.gov/dpdx/HTML/Contactus.htm" is:="" is="" locally.="" microbiology="" nbsp="" not="" service="" site="" their="" this="" turn-around-time.="" web="" when="">http://www.dpd.cdc.gov/dpdx/HTML/Contactus.htm

Posted by ParasiteGal at 2:05 PM No comments: