This week's case is generously donated by Florida Fan, as was just submitted to his lab last month for identification. I love the artistic nature of these photos! 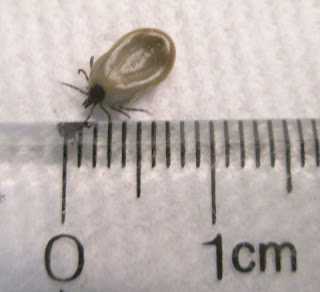 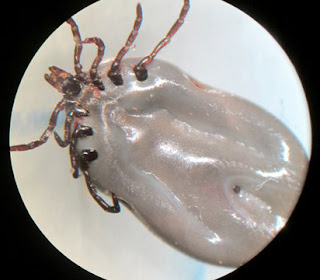 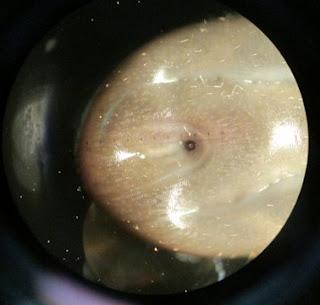 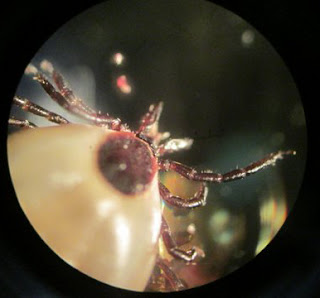 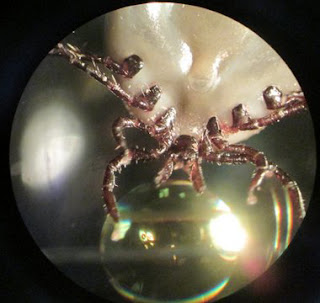 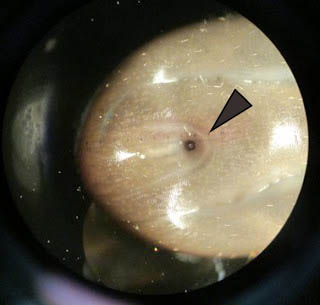 Other features such as the palps and hypostome are used to determine the species.
Posted by ParasiteGal at 6:26 PM No comments:

The following are photos of kidney biopsies from a Mexican man with HIV. Diagnosis? 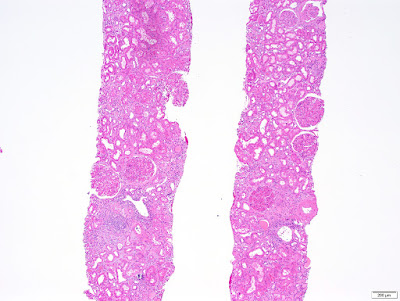 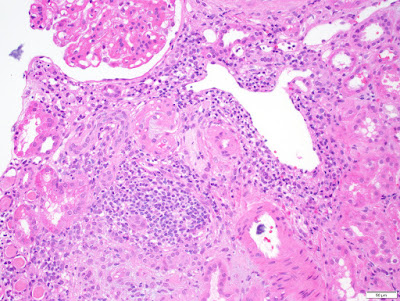 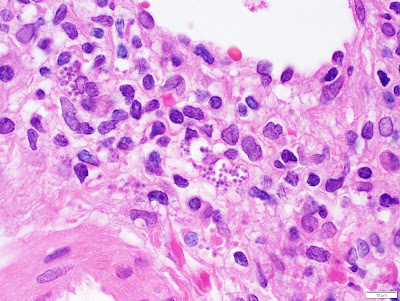 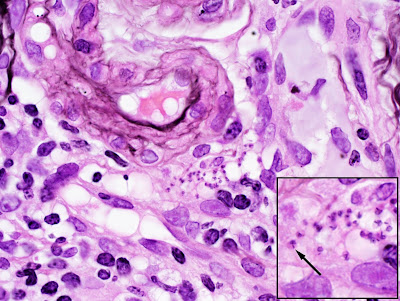 The diagnosis in this case is made by identifying Leishmania amastigotes within tissue macrophages (histiocytes) in the renal cortex. Although amastigotes resemble other small intracellular parasites (e.g. tachyzoites of Toxoplasma gondii), they can be differentiated by the presence of a rod-shaped kinetoplast (inset, arrow). 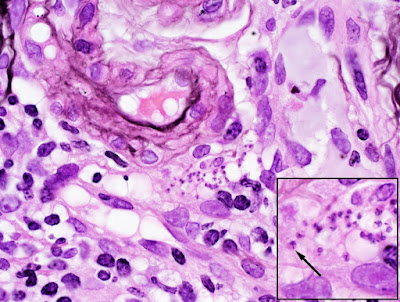 One of the readers raised the excellent question of how Leishmania amastigotes can be differentiated from those of Trypanosoma cruzi amastigotes. The short answer is that the amastigotes of these two related parasites are morphologically indistinguishable, and therefore it can be very difficult to differentiate them. Fortunately, there are some subtle clues which can help us: first, the organisms in this case are not forming pseudocysts in tissue (as is common for T. cruzi), but instead appear to be inside of macrophages (the cell of choice for Leishmania). The location (kidney) would also be extremely unusual for T. cruzi, which is predominantly seen in cardiac muscle, although it can less commonly be found in other tissues. Finally, the amastigotes in this case are extremely small, and it is difficult to make out the kinetoplast. In my experience, the amastigotes of T. cruzi appear to be slightly bigger in tissue than those of Leishmania, and it is much easier to make out the kinetoplast. Finally, the patient's history can be very useful supporting the morphologic diagnosis. In this case, the patient had a history of visceral leishmaniasis which had been inadequately treated.

One last interesting observation from this case is that the Jones silver stain was superior to the H&E for highlighting the kinetoplast . There is nothing in the literature about this stain being used this way, so I would love to hear feedback from anyone who has the chance to try it at their own institution!
Posted by ParasiteGal at 7:32 PM No comments:

This week's case is from a new slide I ordered through Carolina Biological Supplies and was very pleased with what I received. These little microscopic organisms play a role in the life cycle of several parasites. What are they, and can you list 2 of the associated parasites? Bonus - list 4! 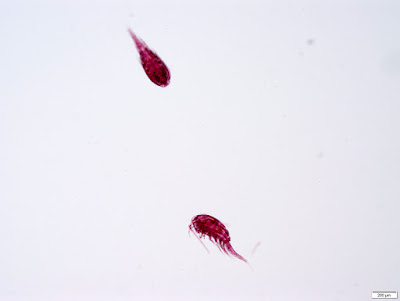 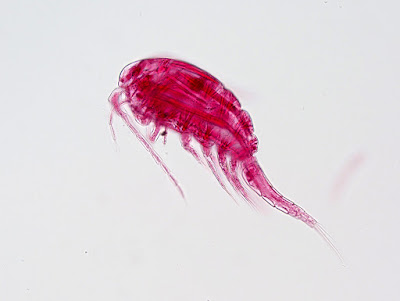 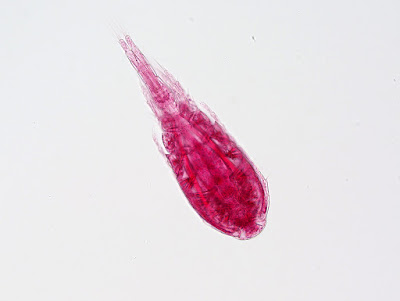 Posted by ParasiteGal at 9:41 PM 6 comments:

Answer: This is a copepod, a microscopic crustacean found in both fresh and salt water habitats. Cyclops, (shown here) is one of the most common genera of freshwater copepods. One reader had mentioned that Diaptomus could also be considered. This copepod has a very similar appearance to Cyclops, but has antennae that are longer than their body.

Copepods play a role in the live cycle of several parasites, including Dracunulus medinensis and Spirometra, Gnathostoma and Diphyllobothrium species. Of note, the very first case that I ever posted on this blog was a copepod containing D. medinensis larvae! You can see it HERE.

Henry Bishop of the CDC DPDx team was kind enough to provide the following images of copepods infected with D. medinensis larvae. The second photo was taken after gentle manipulation which allowed for expression of a larva. 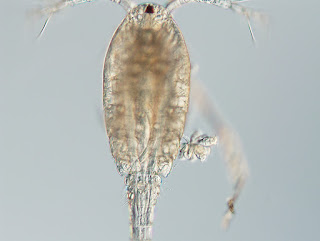 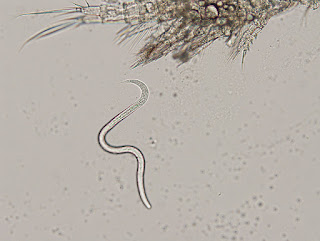 Posted by ParasiteGal at 8:01 PM No comments:

Here is another 'alive and wriggling" case that just came through my lab. The specimen type is skin scrapings. Identification? (taken at approximately 200x original magnification)

Posted by ParasiteGal at 6:31 PM 7 comments:

You can identify this tiny mite by its overall shape including characteristic short stumpy legs (8 in adults) and broad, rounded body.

As Florida Fan mentioned, there are other, animal-specific scabies mites which have a similar appearance, but tend to be host specific and cannot survive on humans.
Posted by ParasiteGal at 9:11 PM No comments:

This case just came through my lab - alive and wrigglin'! It was removed from the scalp from 60-year-old woman. No travel history was provided.  Identification? The images and video are courtesy of Emily F. 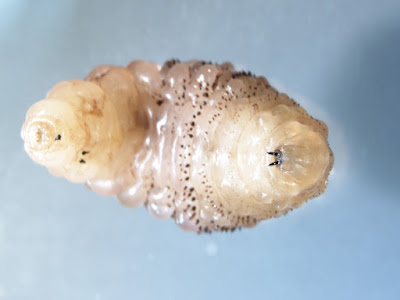 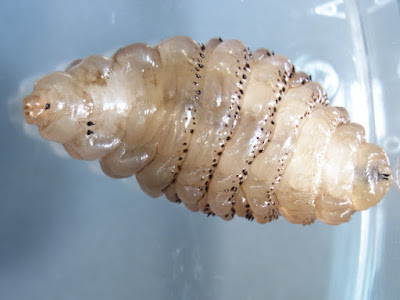 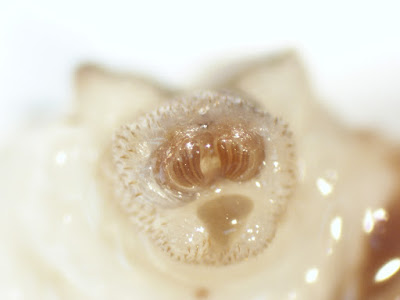 Posted by ParasiteGal at 3:09 PM 7 comments:

This myiasis-causing fly larva (maggot) has a distinctive appearance, with a robust body shape, often a tapered posterior end, and lack of spines on the 3 posterior-most segments. Examination of the posterior respiratory spiracles allows for definitive identification of 3rd instar larvae. In this case, the spiracles have 3 slightly-curved slits and a weak peritreme as shown below: 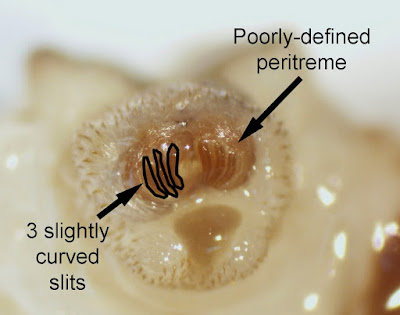 Blaine wrote us a nice poem for this case:
Riding in stealth mode on the head of a skeeter
It’ll crawl down the proboscis and into your skin disappear
For a while it’ll develop in a boil in your skin
Munchin’ on flesh from deep within
Then to pop out of your body and say ‘Happy New Year’

Posted by ParasiteGal at 6:17 PM No comments: