This is quite an unusual case, that as Lukus Roberts mentioned, was published in JCM this past year:

We were first cued in the fact that this wasn't a real worm by the homogenous 'spongy' nature of the worm-like object.  You can appreciate this best on cross-section: 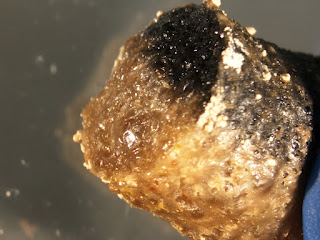 It would be possible that a real worm of this size could be present in the bladder - for example, Dioctophyma renale, the giant kidney worm, or less likely, Ascaris lumbricoides - but a real worm would have discernable internal structures which were clearly lacking in this case.

The object was very resilient and didn't dissect apart, so we also didn't think it was any type of ureteral cast as mentioned by some of the viewers (although this is also a good thought and should be considered).

To work up the case, we first did touch preps of the object and tried to express eggs from it - all which only revealed a few urothelial cells and some bacteria.  We also took a histologic section which showed amorphous eosinophilic material with no outer cuticle.

Fortuitously, we happen to have a jar full of rubber fishing worms that I had sent to the lab as an April Fool's joke 3 years prior.  They had since been sitting in saline as part of our educational collection.  When putting the patient's specimen and known rubber fishing worms side-by-side (both the saline-soaked specimen and 1 fresh from the package), it was clear that they were the same:

(the specimen that was in saline for 3 years is the middle worm, while the patient's specimen is on the right) 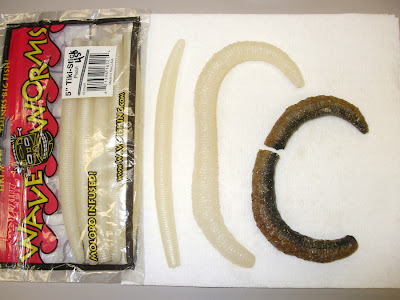 Closer detail of both ends of the 'worms' 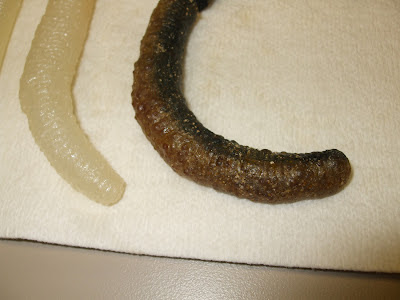 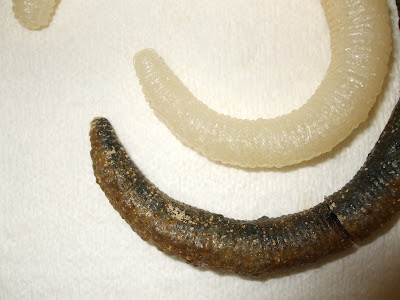 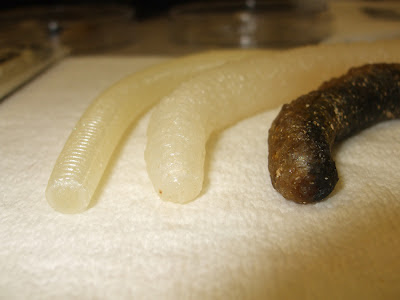 Note the similar internal consistency of both: 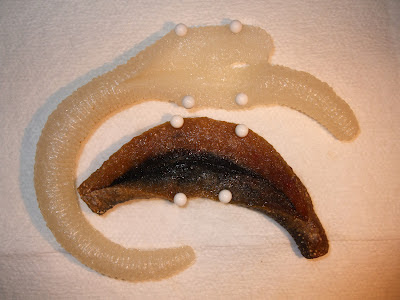 To further characterize the nature of the specimens, we performed infrared spectrum analysis of the known fishing worm and the patient's specimen.  The 2 spectra (shown below; patient on top) were indistinguishable: 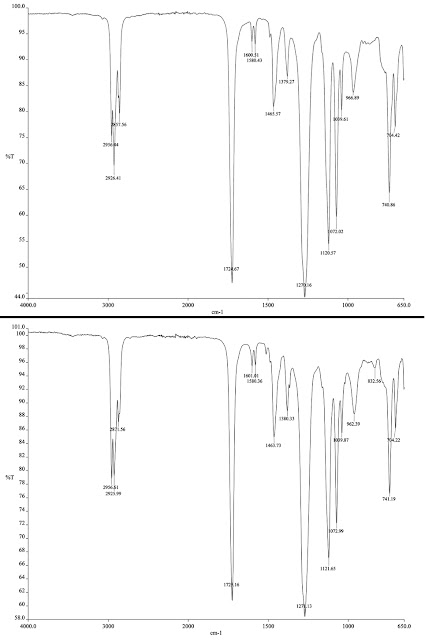 Once we had this information, we discussed the case with the referring physician who then questioned the patient.  At this time, the patient admitted to inserting the rubber fishing worm into his urethra approximately 3 years prior, but felt sure that the worm had been removed and was not retained in his urethra or bladder.

So a very interesting case!  If anyone would like a copy of the manuscript, please send me a comment on this blog or a separate email (b_pritt@yahoo.com) and I will send you a copy.
Posted by ParasiteGal at 8:50 AM No comments:

The following were seen in skin scrapings submitted to the laboratory.  No clinical information is available.  (CLICK ON IMAGES TO ENLARGE) 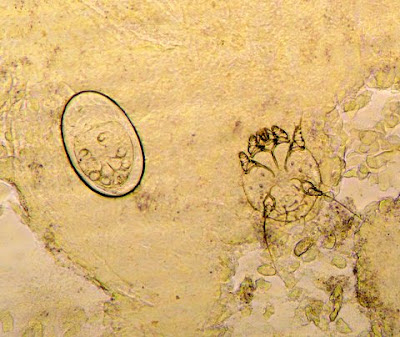 My thanks to Phong Duong for his generous donation of these beautiful images!
Posted by ParasiteGal at 5:27 PM 3 comments:

Answer:  Sarcoptes scabiei var. hominis eggs and newly hatched larva (note it only has 6 legs, while nymphs and adults have 8 legs). You can nicely see the maturing larvae inside some of the eggs!


Posted by ParasiteGal at 10:20 AM No comments:

A 15-month old U.S. child spent 3 weeks in Nigeria with her parents.  On return, the following were seen in stool and blood specimens. 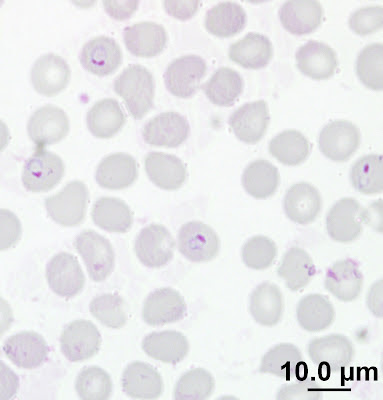 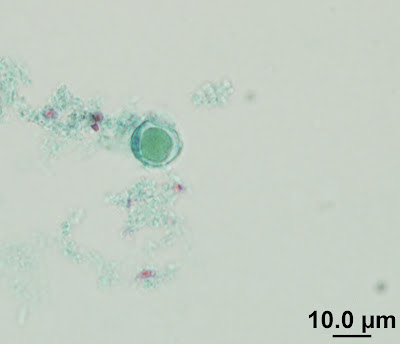 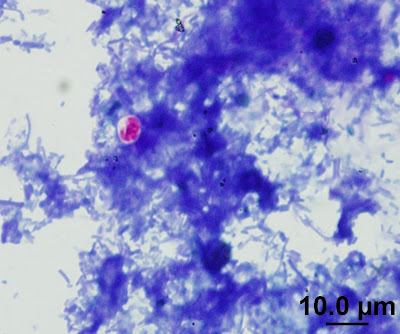 Many thanks to MicrobeMan for donating this case!
Posted by ParasiteGal at 5:00 PM 7 comments:

The viewers did a great job answering this case, and so I will just cut and paste from the comments:

The blood case: only ring forms found, ring diameter smaller than half of infected red cell, infected cells not enlarged. A few ring have two nuclei, one applique form found. Based on these findings, the organism is consistent in morphology with P. falciparum.

(Notes from Parasite Gal - Babesia spp. would also be in the differential diagnosis, although the ring forms are fairly regular in size and shape and there are no extracellular forms or maltese crosses.  Therefore this appearance is more consistent with Plasmodium falciparum.  This also fits with the travel history.)
The second case: A ring of nuclei distributed on the edge of the cell (actually think of it as a clear spherical glass ball and some body just stick a few globs of play dough, if you rotate this ball, you will see different variations in morphology of the distribution of the play dough globs). The identification is therefore B. hominis.

(Notes from Parasite Gal - I like the "globs of Playdough" analogy!  Also, Hans points out that there is taxonomic confusion about Blastocystis, and that there are actually multiple sub-species/genotypes, or possibly multiple species, and therefore it is more correct to say "Blastocystis species" rather than "Blastocystis hominis").
Finally, although there was some debate on the size measurement, the consensus for the last image is Cryptosporidium species, based on the fact that the oocyt shown is less than 8-10 microns, and closer to 6.
Thank you for all of the great comments!
Posted by ParasiteGal at 2:53 PM 1 comment:

The following were seen in a stool parasitic examination on a 38 year old man from Egypt.  Identification?  (CLICK ON IMAGES TO ENLARGE) 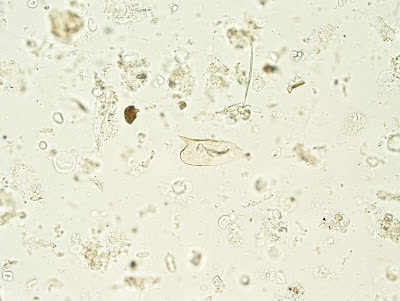 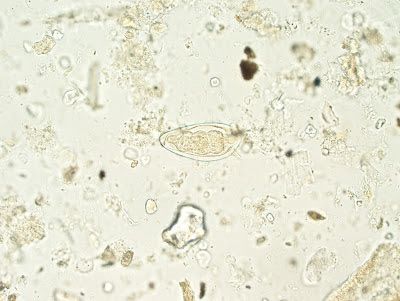 This egg can be identified by its large size and characteristic lateral spine.

Thanks for all of the great comments!
Posted by ParasiteGal at 11:05 AM No comments: