Answer: Loa loa, adult worm and microfilariae
Thanks to Idzi for another spectacular case. This one nicely compliments his last case (see Case of the Week 509) which features a different round worm that can also be found in the eye: Dirofilaria. I've seen several ocular dirofilariasis cases in the past few years - all which had been initially mistaken for Loa loa - so I think it's important for microbiologists and clinicians to know that the two worms can have a similar presentation.

So how can you tell them apart? Here are some helpful features:
1. Travel history: Loa loa is found in West and Central Africa, whereas Dirofilaria has a much broader distribution (Africa, Asia, Europe). If the patient hasn't been to West or Central Africa, then the diagnosis is probably not loiasis.
2. Morphology of the adult worm: The adults of both worms have a similar size and gross appearance. However, Loa loa has irregularly-spaced cuticular bosses ('bumps' on the outer aspect of the cuticle), whereas Dirofilaria has longitudinal ridges. Here are some representative images of the two:

Loa loa (I sadly neglected to include this image from the case earlier): 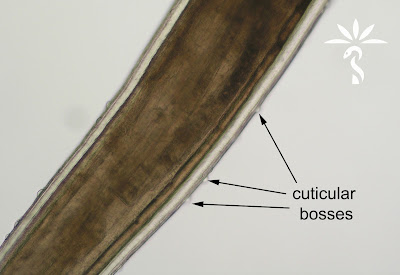 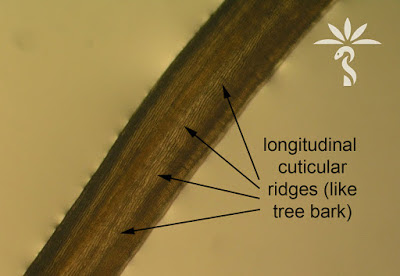 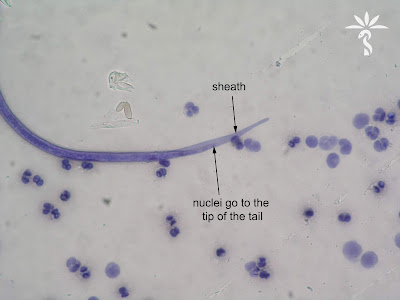 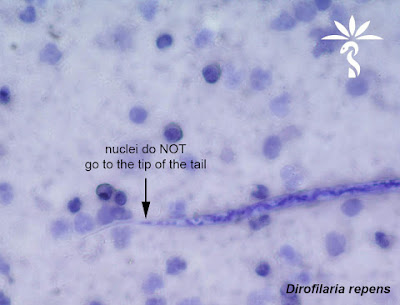 Note that the sheath of Loa loa (as well as Wuchereria bancrofti and Mansonella ozzardi) is usually colorless with tradition Giemsa stain, but is highlighted using Carazzi's hematoxylin stain as shown here. In comparison, the sheath of Brugia malayi is usually - but not always! - bright pink on Giemsa stain.

Posted by ParasiteGal at 9:49 PM No comments:

The week's case is generously donated by Dr. Peter Gilligan, Cody Craig, and Leslie Dodd. The following objects were noted on a Papanicolaou-stained rectal smear from a male patient. They measure approximately 5 to 10 micrometers in diameter. Images were taken using a 40x objective. 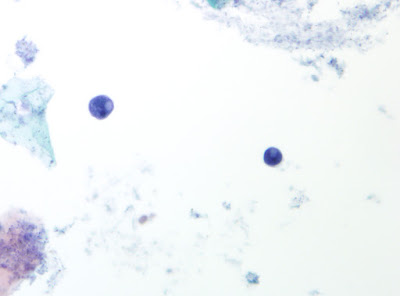 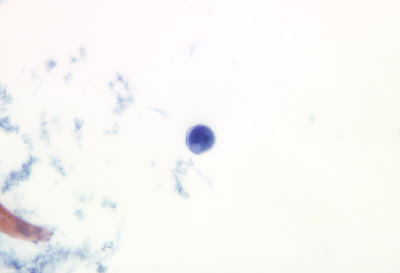 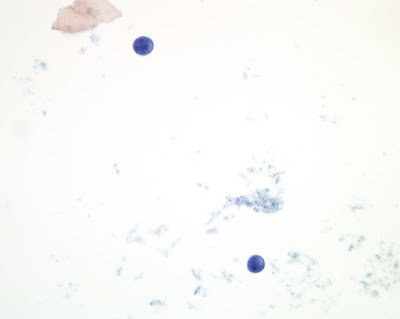 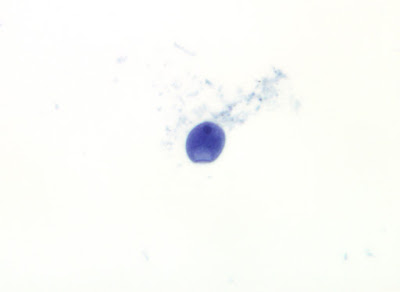 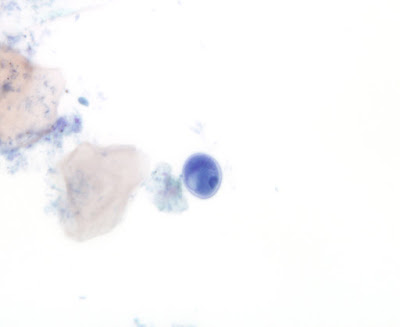 Identification?
Posted by ParasiteGal at 9:15 AM 14 comments:

I thought this was a fun example of a relatively common parasite seen with an uncommon preparation. It's nice to see that an alternative stain such as Papanicoloau still allows for morphologic identification of the intestinal amebae.

The key morphologic features of this case are the small size of the organisms (primarily cysts, and possibly one trophozoite), nucleus with large karysome and lack of peripheral chromatin, and large cytoplasmic vacuole in the cytoplasm of the cyst form. As Florida Fan mentioned, the large glycogen-filled vacuole would be deeply stained with iodine if we had a wet mount preparation. 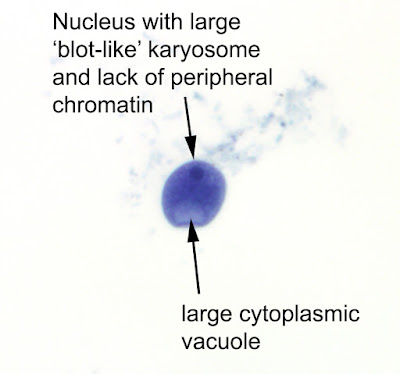 Some of you wanted to understand the basis for the Pap-stained anal/rectal smears, given that this is not something usually performed by the microbiology lab. The purpose is to exam for squamous cell dysplasia and carcinoma secondary to Human Papillomavirus infection - the same type of exam used for female cervical smears. Anal/rectal smears are usually done in the MSM population (men who have sex with men) - particularly when they engage in unprotected anal intercourse which puts them at risk for a variety of infections. Of course, when we exam smears from this source, we are bound to detect the occasional intestinal parasite as a incidental finding!

I published a similar case a few years back with some colleagues which you can read HERE.
Posted by ParasiteGal at 2:58 AM 2 comments:

This week's case is a centrifuged urine specimen obtained from a child from Sub-Saharan Africa. Many ovoid, elongate, and 'lemon-shaped' objects are seen, ranging in size from 50 to 150 micrometers in length. 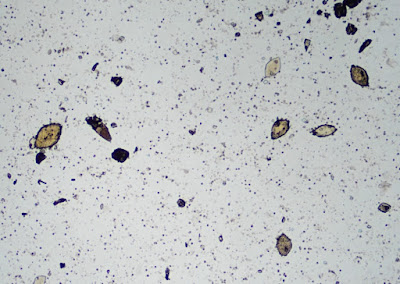 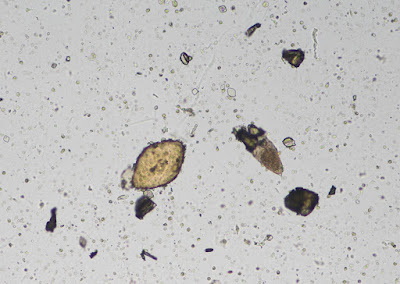 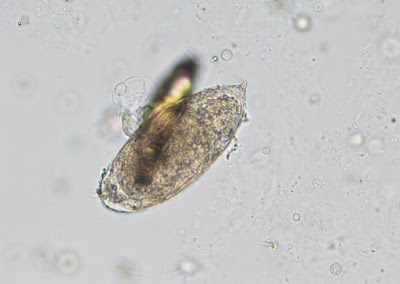 What are these objects? Special thanks to Heather Rose, our fabulous parasitology technical specialist, for providing these images.

Kudos to those who saw noted both the eggs AND the crystals! I've presented uric acid crystals multiple times in the past to reinforce how they are common (and convincing) mimics of S. haematobium eggs. However, this is the first case I've presented where BOTH are present, and I think it's important to note that the presence of crystals does not preclude the presence of actual parasite eggs.

Here are some of the diagnostic features from this case:

Uric acid crystals and a partially-hidden egg. Note the size variability of the crystals, and the points on both ends (like a lemon). 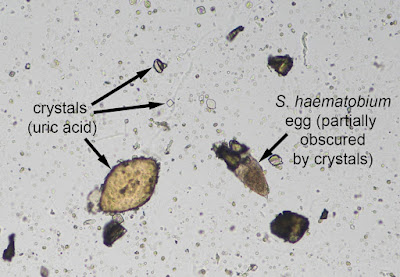 A true S. haematobium eggs with a defined 'pinched off' terminal spine and larval form (miradium) within. 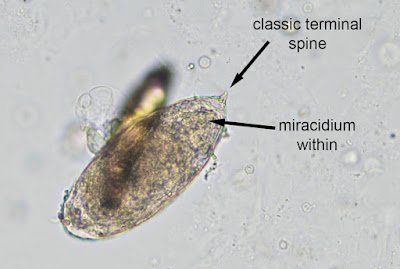 Case of the Week 464 has many examples of uric acid crystals from previous cases - check it out HERE.

This week's case is an unexpected finding on a 3-day-old pleural fluid bacterial culture growing on a Mueller-Hinton agar plate. The specimen was from a hospitalized North American adult patient with no travel history. 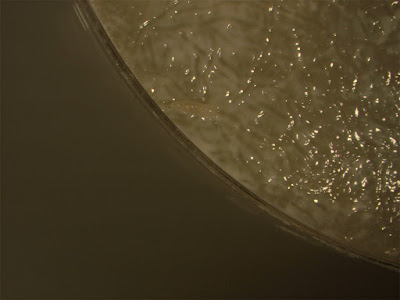 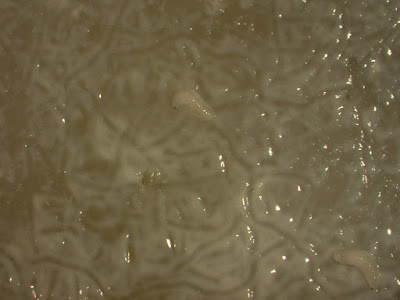 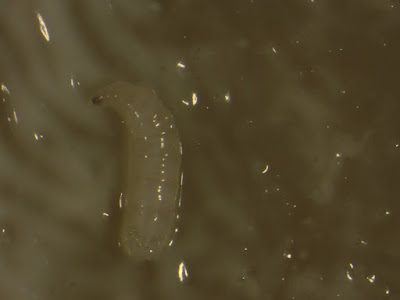 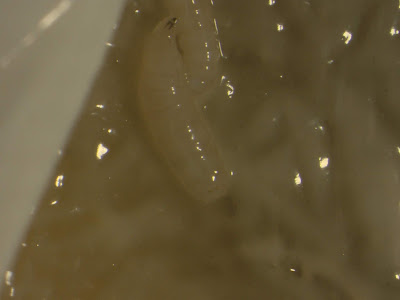 What are these objects, and what is their likely source? Were they likely from the pleural fluid, the blood culture media (into which the pleural fluid was inoculated), the agar culture media, or the environment? What steps would you take to figure this out? A special thanks to Felicity for these photos and videos!

Posted by ParasiteGal at 7:44 PM 8 comments:

Answer: fly larvae from the environment, or as Florida Fan said, "agarmyiasis!"

These larvae could have originated from a number of places, including the patient's body, the blood culture bottle, the Mueller-Hinton (M-H) agar (prior to inoculation), and finally, the M-H plate inoculated with patient specimen and growing mixed bacterial and yeast colonies. However, we were able to take a logical approach to narrow the source down to one of TWO options that we felt were most likely - either the uninoculated M-H agar plate, or the plate after it was inoculated with patient specimen. We did NOT think that they came from the patient or the blood culture bottle.

Here are the factors that we considered in this assessment:

1. The patient: As the Old One mentioned, pleural myiasis has been documented in humans - usually in the tropics in unsanitary conditions - but the shape and early instar stage of the larvae are not consistent with your typical robust bot flies, there was no cancerous mass, and, most importantly, the patient's history was NOT supportive of this diagnosis.

The lab also went back to the original blood culture bottle into which the pleural fluid had been inoculated and confirmed that no other larvae were present - thus also supporting that the pleural fluid was not the source of the larvae. To be on the safe side, more of the fluid from the blood culture bottle was inoculated onto a new agar plate and checked them for larvae; none were seen.

3. The Mueller Hinton agar: This was an intriguing possibility given that some agar plates are made by the lab. In this process, the agar is heated to liquid consistency and poured into Petri dishes on the bench top. As Florida Fan mentioned, the lids are left ajar while the agar cools to prevent condensation, during which time a fly could oviposit onto the nice warm agar. HOWEVER, the agar in this case was NOT made by the lab, but instead purchased from a commercial source. The plates were received sealed in a plastic sleeve, and were kept refrigerated until needed. Before inoculation with patient specimen, plates are allowed to come to room temperature with their lids closed. The plates are then inoculated inside of a biosafety cabinet (hopefully without flies!) and closed again. All inoculated plates are placed with their lids on within a closed incubator - again, hopefully keeping flies out.

So could have the contamination occurred at the manufacturer, with the eggs remaining dormant on the refrigerated plates until they were inoculated and incubated? It's definitely plausible! If the adult fly only laid eggs on a single plate, then we wouldn't expect to see contamination of other plates in this batch (again, we checked other plates from this lot of media, and no additional larvae were seen).

4. The agar plate with bacteria: We finally came to the M-H plate itself with its abundant growth of bacteria and yeast from the patient specimen. This was an older growth plate - 3 days - and during the time in the lab, it had been opened numerous times by multiple technologists. At 3 day, it was sitting in a bin on the bench top while the yeast was being worked up further. So could a fly have gotten in there at some point to lay eggs, and perhaps munch on the nice tasty microorganisms? This is another plausible scenario, and probably the most likely.

Whew! My apologies for the long explanation. Please let me know if I forget any other potential avenue for contamination. At the end of the day, the most important conclusion from this case was that the larvae did not come from the patient (who has now recovered with antimicrobial treatment) and that the source was likely environmental. We did try to identify the genus of the larvae, but they were very small (~2 mm long) and only in their second instar, thus making it difficult to provide an ID.

This week features our monthly case from Idzi Potters and the Institute of Tropical Medicine, Antwerp. The patient is a European male with recent travel to Senegal who presented with right conjunctivitis. On ocular examination, a 10-cm long worm was identified and removed from the right conjunctiva. It measured 470 micrometers in diameter. 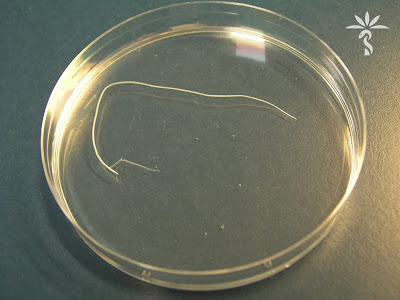 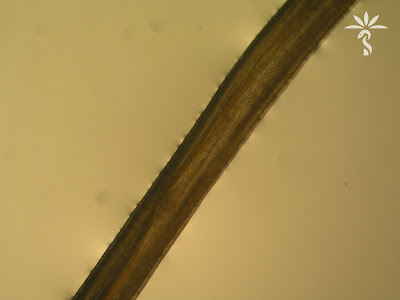 A Knott's concentration was also performed on the patient's blood, revealing 6 larvae per milliliter. Each larva measured approximately 375 micrometers long by 10 micrometers wide. 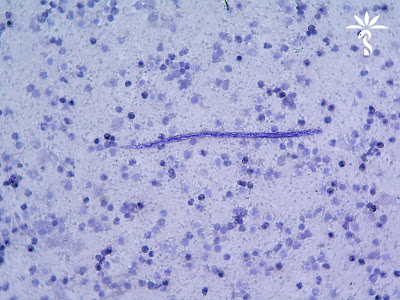 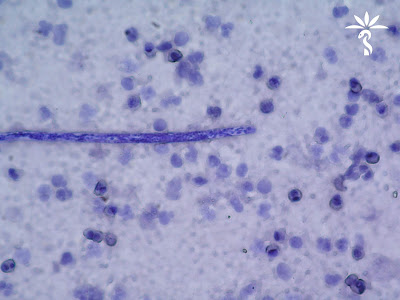 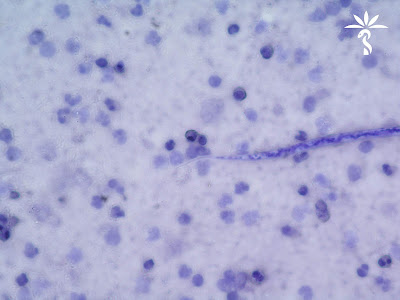 Answer: Dirofilaria sp.; most likely D. repens based on the presentation, geographic exposure, and morphology of the microfilariae in blood.

Idzi and his group recently published this case in EID; you can read about all of the important diagnostic details such as the length of the adult worm, its cuticle, and the morphology of the microfilariae HERE.

Here a just a few important points from this case:

1. Not all round worms removed from the eye are Loa loa. While loiasis is the ocular roundworm infection that most physicians are familiar with, human dirofilariasis is an emerging infection that should be considered whenever a patient presents with a macroscopic worm moving across the cornea. Unlike L. loa which has a limited geographic distribution (West and Central Africa), Dirofilaria repens is widely distributed throughout parts of Africa, Asia, and Europe, including temperate climates. HERE is a great article outlining the distribution of vector-borne diseases in Africa; it has nice maps showing that loiasis is NOT in Senegal where this patient was presumably exposed. 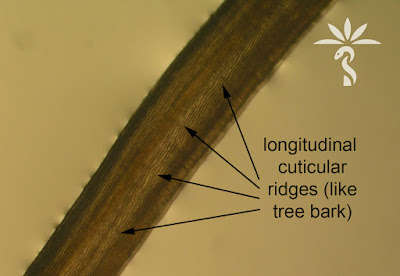 In comparison, Loa loa has irregularly-spaced cuticular bosses or 'bumps' that are located along along the long axis of the worm. Here is a good example of these bosses from Parasite Case of the Week 482: 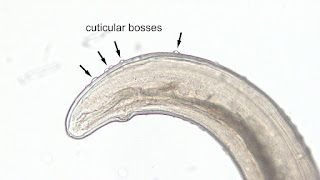 3. Microfilariae are only rarely seen in human Dirofilaria infections - making this case particularly cool! Unlike Loa loa, the microfilariae of D. repens do not have a sheath, and the nuclei do not go all the way to the tip of the tail. Thus the features of the microfilariae can be used to support the diagnosis in this case. 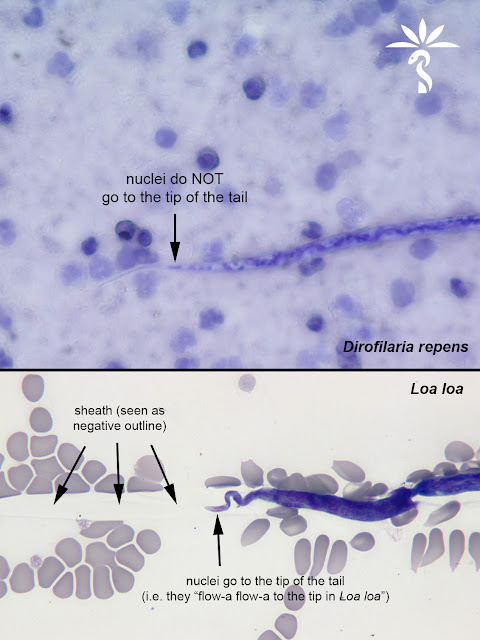 Thank you for all of the great comments on this challenging case!

Posted by ParasiteGal at 7:39 PM No comments: